The nature of mechanized warfare has drastically changed throughout the last 70 years, but one thing remains the same – the old saying: “It’s the man, not the machine”. Operational reports are littered with cases of untrained crews in modern vehicles being defeated by under-equipped forces with superior training, because even the best armored vehicles cannot compensate for poor crew performance.

Today, we are going to take a look at the latter. The Crew window can be accessed by clicking on the Crew portraits in the Garage, or by selecting the Crew tab in the Vehicle Status window. Unlike the Commander, a Crew is always tied to a particular vehicle and cannot be moved to a different one. Effectively, they represent the amount of experience a player has acquired on that respective vehicle – maximum level crews will usually only appear on vehicles that have been in many battles. 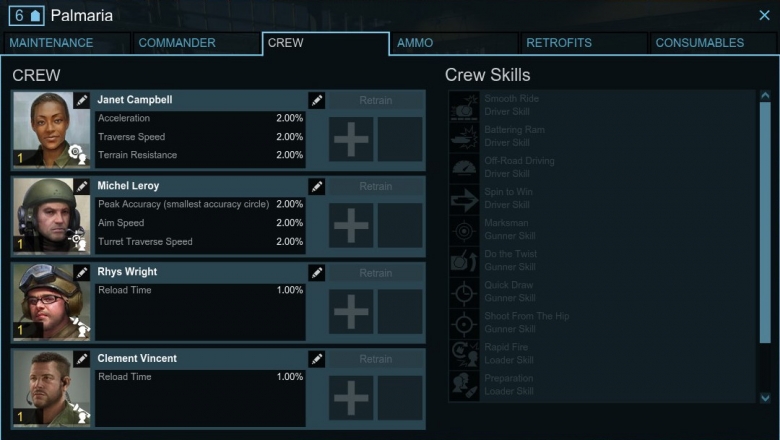 Some vehicles have only two crew members – the loader is missing because the vehicle has an automatic loading mechanism (typical for rapid-fire automatic cannons, unmanned turret vehicles and Russian Main Battle Tanks). While other vehicles (specifically of the Self-Propelled Gun class) can have four crew members (two loaders). 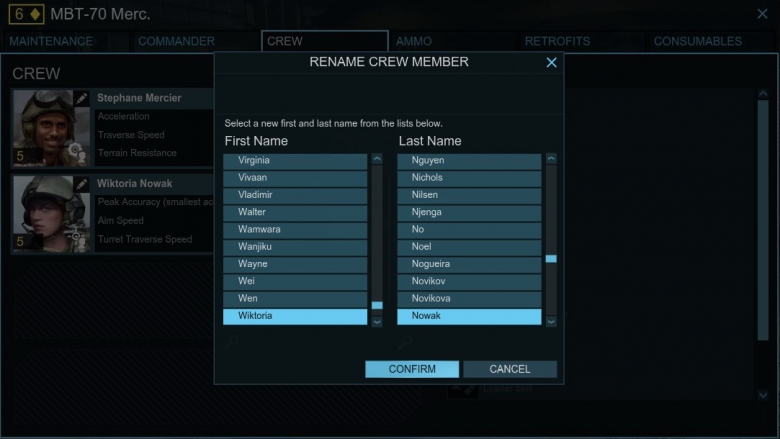 Crew members can be customized – players can select what they look like, (from the portraits listed – both men and women are available), their names and surnames (both from a list of allowed names).

In battle, crew members act as other internal modules. They have a certain amount of hitpoints and enemy shots penetrating vehicle armor can injure them. Injured crew members can significantly reduce vehicle performance – a vehicle with a disabled driver will accelerate and turn slower than one with an active driver. Unlike the internal modules, however, injured crew members won’t heal by themselves and require a consumable (First Aid Kit or Medical Kit) to recover.

The main crew member progression system is the level upgrade. Each crew member starts on level 1 (apart from special cases such as the Black Friday promotion vehicles) and can be upgraded to a maximum of level 5. The crew members require a certain amount of Crew Experience to upgrade to the next level. Crew Experience is gained both in PvP and PvE battles and is equal to the amount of reputation gained from that battle (a premium account therefore improves the crew progression rate). Nevertheless, it takes a significant number of battles to upgrade crew members to Level 5 (typically in hundreds of battles):

Each crew member level adds 2 percent to certain vehicle properties, starting at 2 percent on level 1 (with the exception of the loader, who improves their reload time by only 1 percent per level).

Vehicles with only two crew members (missing a loader) have their reload time improved by the Gunner level progression, unless they have an automatic loader – one case of a gunner also being a loader would, for example, be the LAV-300. Automatic loaders do not receive the reload time bonus and are not influenced by crew-improving consumables either (with the exception of commander skills that improve loading times).

Generally speaking, a level 1 crew vehicle with a loader will have a worse reload time compared to a level 1 crew vehicle with an autoloader, but high level loaders often surpass vehicles with an autoloader in performance, especially with various crew boosts. In both cases, vehicles without a separate loader compensate for this drawback with their base characteristics. Vehicles with two loaders can achieve a reloading time bonus of up to 10 percent by upgrading both loaders to level 5. Please note that the level 1 crews any vehicle starts with already improve the basic characteristics for the respective crew member by 2 percent.

Crew progression rate can – apart from purchasing a premium account – be improved by certain commander skills (for example Maximilian Koenig’s Accelerated Training skill) and boosters. Furthermore, some premium tanks (such as the MERC edition vehicles) come with fully-trained level 5 crews as well. 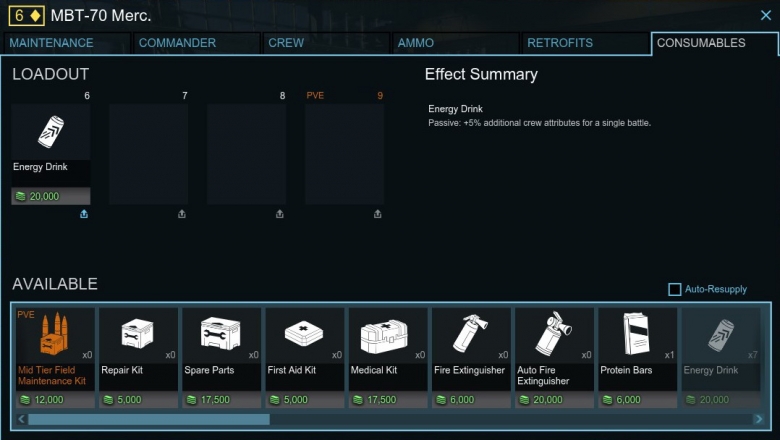 Crew vehicle performance improvement can be further enhanced by the commander’s skills, by consumables (Protein Bars – 2 percent enhancement and Energy Drinks – 5 percent attribute enhancement), as well as certain retrofits (Braided Kevlar Wiring, Intercom Systems). As an example of how much vehicle value can improve, we will use the VFM 5 MERC Light Tank and its APFSDS shell damage per minute value (number rounding in effect): 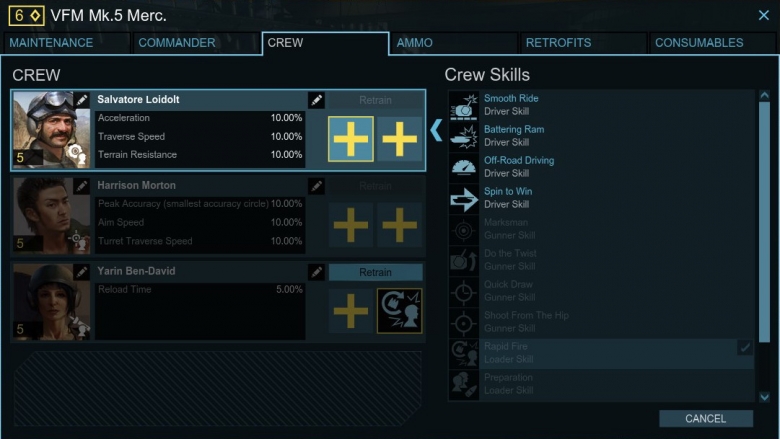 Each crew member (role) can choose from four skills (with exceptions, see below). The following skills can be selected:

Obsidian Entertainment will continue to develop the crew system to make it even more interesting by adding more crew customization and upgrade choices in the future. We do, however, hope that for now this guide will answer some of the most frequently asked questions regarding the current crew system.

Learn about the background and the reasons of the PvE progression changes in Update 0.10 from Andrew Rowe, systems developer