Menu
Play now
Throughout history, armor – just as shells – has undergone an evolution process that started with plates of hardened steel and ended with composite armor layers on modern main battle tanks. While the means may have changed, the principle remains the same – it is imperative to protect the crew inside from harm. To that end, modern tanks have various means from the armor itself to the most advanced active systems.

In Armored Warfare, there are several types of armor. Let’s look at basic tank armor first.

Every part of the tank armor has a thickness value assigned to it. This thickness value represents the strength of the armor on that particular spot. Typically, armor is strongest at the front, while the sides and rear of a tank tend to be much thinner for obvious reasons – the front of the tank is the part turned towards the enemy and as such it is much more likely to be hit by enemy fire.

Apart from nominal thickness values, each armor part is also angled in a certain way. Angled armor is known as sloped armor and it plays a major role in the protection of modern tanks. Armor with sharp angles is capable of withstanding much stronger shells than if it is not angled at all, because it has higher effective thickness - to give you an example: a 100mm plate angled at 30 degrees from horizontal (or 60 from vertical if you will) has effectively double thickness, since the shell flying directly from the front has to actually penetrate 200mm of armor. 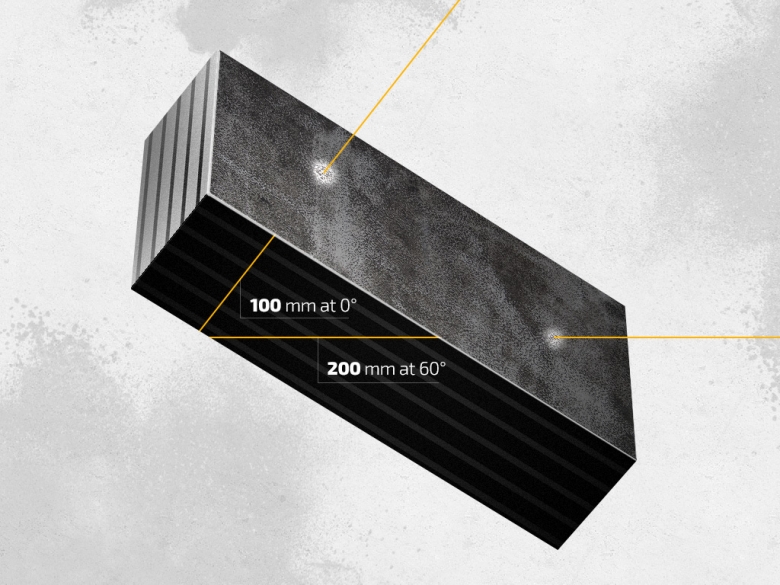 Therefore, having well-angled armor is as important as having a very thick piece of metal between you and the enemy and indeed most of the newest tanks take this into consideration with their well-sloped frontal plates.

During our time developing Armored Warfare, we encountered one major issue when it comes to modern tanks. While older tanks are generally well researched and the thickness of their armor is widely known and published, the armor of modern battle tanks and other vehicles is often kept secret for security purposes. While we are trying to keep the vehicles in the game as realistic as possible, exact armor data on certain tanks are impossible to obtain. Therefore, we have to rely on military estimates by various analysts and experts, often published in the form of rolled homogenous armor equivalent (RHAe).

Rolled Homogenous Armor Equivalent is – to put it simply – the amount of steel you would have to use to generate the same level of protection the vehicle currently has. These values are often very high because of the large difference between modern armor composites and the steel of old – for example, it’s not uncommon for a modern battle tank to have a frontal protection of 500 or more millimeters of rolled homogenous armor, while the actual plates are just 150mm thick.

The RHAe estimates help us to determine the values of armor for most modern tanks and while we are dedicated to keeping the game vehicles true to their real life counterparts, in some cases even expert opinions on these values are just an educated guess. It is therefore possible to adjust the values for the sake of balancing the vehicle in Armored Warfare, as the gameplay is always of prime importance.

For typical steel armor, the coefficients are the same (1.0/1.0/1.0), as steel represents the baseline material. Aluminum, while lighter, is somewhat less effective and therefore, its coefficients are slightly lower. On the other hand, special high quality steel or even more exotic materials can provide increased protection compared to the steel baseline. 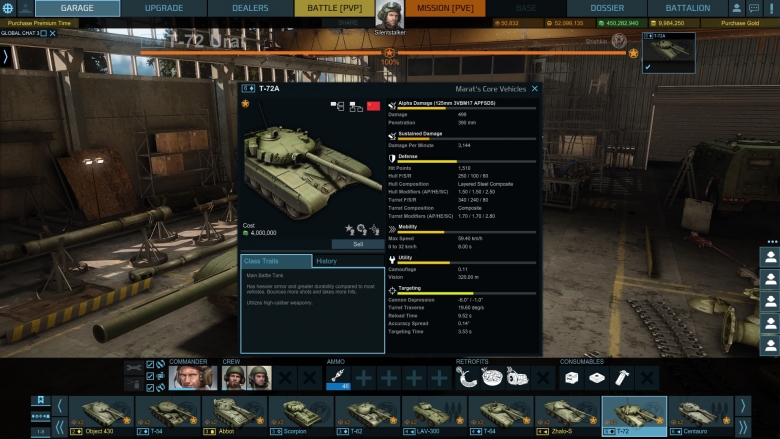 There are armor types that are especially effective against a certain type of shell – the best example would be composite armor. In reality, this armor consists of two steel plates with special material – for example ceramics – in-between. This type of armor emerged in the 50s and 60s and was designed with one goal in mind – to defeat HEAT shells. Therefore, in the game, this type of armor is very high coefficient against HEAT shells. These coefficients will closely represent the improved protection these types of armors offer and will play a role in the resulting armor protection.

Some examples of armor consist of more than one layer with layers positioned at a distance from one another. This is because, under certain circumstances, two plates at a distance from one another is thought to offer more protection than one homogenous plate with the combined thickness of the two. The effect of distanced plates was discovered during the Second World War and, originally, it was used to protect vehicles from anti-tank rifles. Later it was discovered that this effect provides additional protection against HEAT projectiles as well and spaced armor became more and more popular. 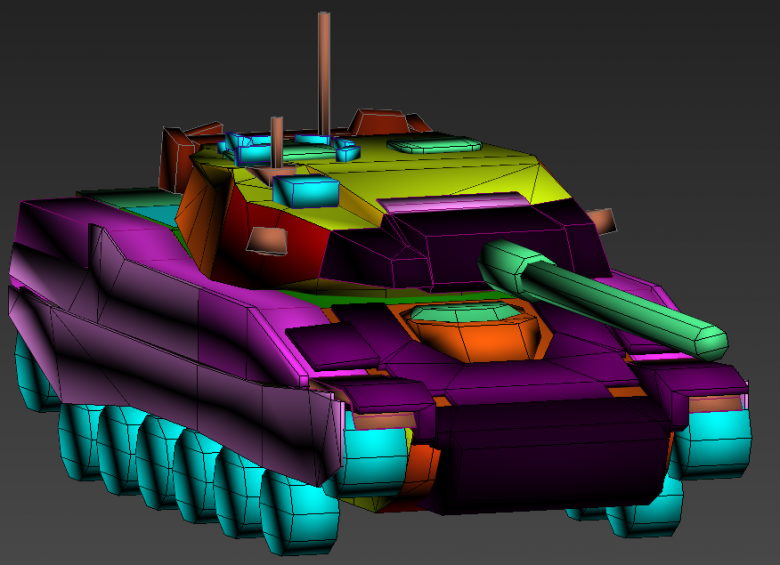 In Armored Warfare, spaced armor reduces the penetration value of incoming kinetic projectiles by their thickness before allowing them to continue towards the next layer. Penetrating spaced armor does not cause damage to the vehicle – in order to achieve that, you have to penetrate the tank’s main armor. Additionally, spaced armor is very effective against HEAT shells, significantly reducing their penetrating potential by making them detonate further from the main armor. HEAT shells penetrate the armor by creating a focused jet of molten metal that can be extremely effective, especially against steel. By detonating a HEAT shell further away from the main vehicle armor by the means of spaced armor, the jet becomes less focused and has to travel further towards the main armor, reducing its effectiveness.

In addition to standard armor protection, it is possible to upgrade your vehicle with numerous additional protection and defense systems. These upgrades can be unlocked as vehicle modules and do influence vehicle performance, sometimes drastically improving its protection against a certain type of shell. They do come at a price, however, – some of these modules can be quite heavy and can noticeably reduce vehicle mobility. Consider this tradeoff wisely as mobility is often essential to lighter vehicle classes. Others exclude one another – it is not possible, for example, to install additional camouflage on a vehicle with explosive reactive armor. 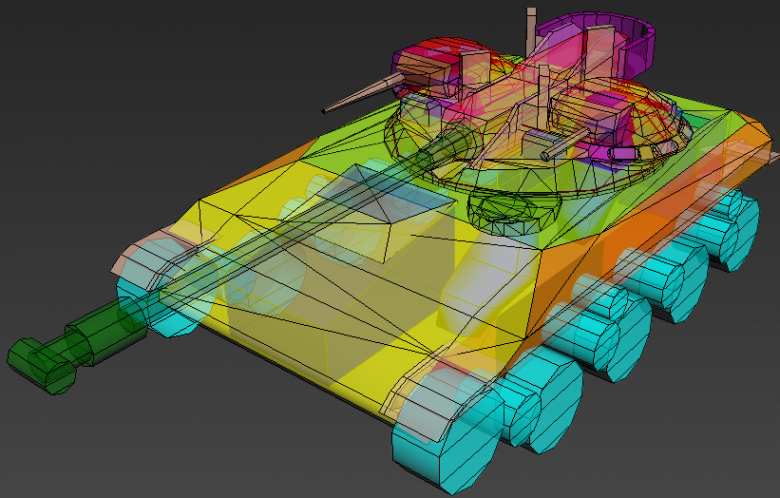 Applique Armor – An additional layer of metal, reinforcing a certain location on the vehicle and increasing the armor thickness value of that particular spot.

Cage Armor – A metal grid around certain parts of the vehicle, designed to either detonate HEAT shells prematurely or to completely disable them. In Armored Warfare, cage armor cannot be destroyed and works effectively as an anti-HEAT shell barrier. Currently, HEAT shells hitting cage armor have a 66 percent chance of detonating on the cage armor surface, reducing the penetration of the round considerably. Cage armor also offers additional protection against HE shells, reducing their effect by detonating them further from the hull.

Explosive Reactive Armor – This system consists of metal boxes, filled with explosives. These elements explode violently when hit, shattering hardened kinetic penetrators – but their main purpose is to defeat incoming HEAT shells by making the HEAT jet of molten metal travel longer, thus significantly reducing its effect. Once hit, however, the element is spent and that particular spot is left vulnerable. In Armored Warfare, installed ERA can be seen on the vehicle as it is represented visually. Explosive Reactive Armor segments negate incoming HEAT shells when hit, but the spot previously hit is left vulnerable and any subsequent hits have a higher chance of penetrating the armor beneath. You will always know when your ERA is activated – spent ERA blocks are also shown on the vehicle model. Some advanced ERA systems also reduce the efficiency of armor-piercing shells to a certain degree. To counter the ERA, special HEAT warheads have been developed – tandem warheads. These are essentially two classic HEAT warheads detonating one after another – the first one destroys the ERA, while the second one punches through the main armor. In Armored Warfare, tandem HEAT charges are not completely nullified by ERA. Instead, they treat ERA as an additional layer of armor that has a very strong composition modifier against HEAT. More powerful ERA has higher modifiers. This means that Tandem HEAT charges will defeat weaker ERA, but may be countered by more powerful ERA or a combination of ERA and powerful vehicle armor.

The Explosive Reactive Armor, as seen on the T-72A collision model (the white parts) 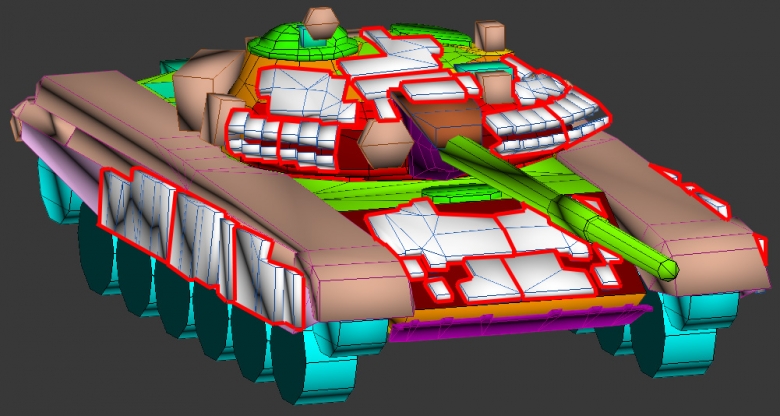 Active Protection Systems – Beyond these armor modules, certain advanced vehicles can also be equipped with hard-kill APS modules. These systems were designed to protect armor against incoming guided missiles. They fire solid projectiles against incoming missiles, destroying them in mid-flight. They work automatically, but have limited uses and a cooldown. The second type of the active protection systems are the soft-kill ones. They do not fire projectiles – they rather disrupt the guidance of incoming missiles by electronic or optical means. In Armored Warfare this is represented by unlimited uses but a longer cooldown. In the future, soft-kill systems in Armored Warfare will veer missiles off-course, instead of simply destroying them, making them impact away from the tank.

Smoke grenades – this defensive system fires several smoke grenades in the direction of the turret front, creating a smokescreen and hiding your vehicle from enemy sights for a certain period of time. The smokescreen dissipates relatively quickly and as such, this measure should be employed only as a last resort. It is also available only for certain classes, has to be activated manually and has a limited number of uses.

The vehicles in Armored Warfare consist of two models – the visual model (the graphics the players see) and the collision model (a simplified representation of the vehicles used to calculate hits, misses and penetrations by the game server). Compared to the real visual model, the collision model has but a fraction of polygons. There are two reasons for this simplification:

To give an example for the latter point – imagine the Armored Warfare collision model was as detailed as the visual model. Every little bit of metal and – even surface irregularities in extreme cases – would affect shell impact, resulting in much less predictable gameplay: the shell could for example ricochet off after hitting a tiny bit of metal welded to the tank front (towing hook for example). While such randomness does happen in real life, it would make for very poor gameplay as players need to be able to sufficiently predict what their shell will do. A collision model that is too detailed would eventually results in many cases of outrageous random shots where a shell ricochets off small parts of armor details into sensitive tank areas. We do not want such “accidents” to occur often, so we have opted to simplify the armor model even though CryEngine does support a much higher level of collision model detail.

Each vehicle’s collision model is split into multiple zones that are identified by their colors. Each zone has a number assigned to it, representing the armor thickness in millimeters (before the armor materiel modifier). The entire impact mechanism is resolved by the server when a shell collides with this simplified model. Spaced armor has its own set of additional zones, as does ERA.