Each season of Armored Warfare is bringing new Special Operations and, with them, a set of difficult achievements. Only truly dedicated players that put some time and effort into preparations and training are able to complete them and earn their rewards. 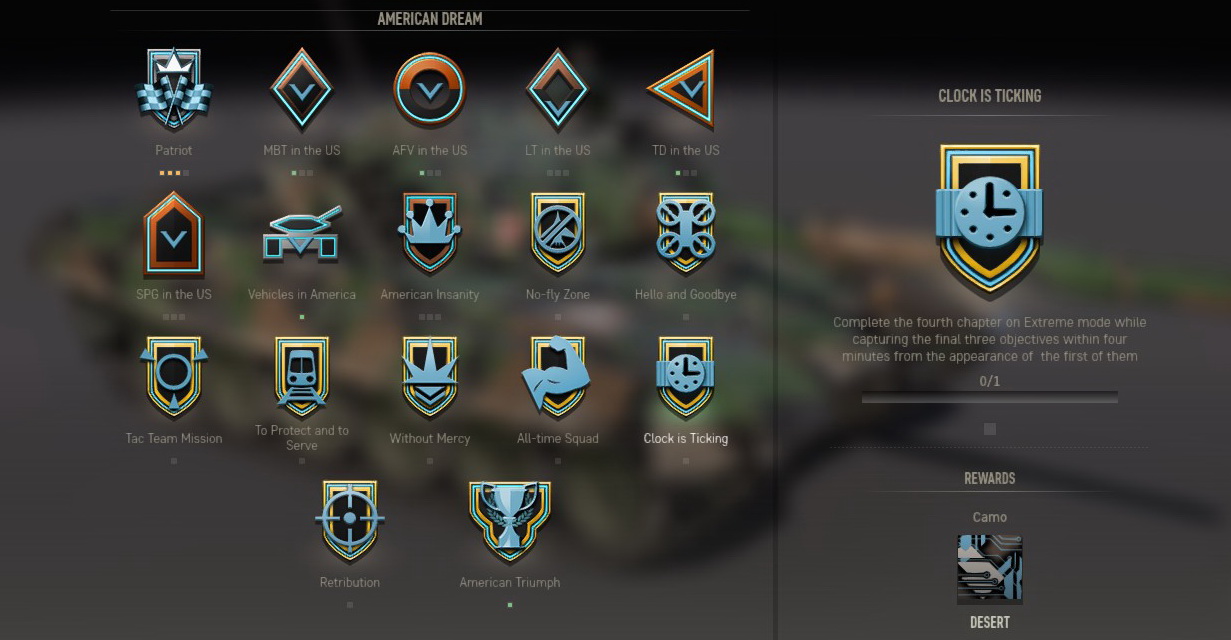 A good example is the Clock is Ticking achievement that requires you to capture the three towers during the fourth American Dream Special Operation mission within four minutes from the appearance of the first of these objectives. For completing this achievement, the players are rewarded with the desert version of the unique American Dream Special Operation camouflage.

In the video above, you can see a group of skilled players completing this achievement, which brings us to a few simple rules that you should observe, if you are planning to complete such difficult tasks.

This is perhaps the most important rule of them all. While it is technically possible to complete such difficult achievements even in randomly assembled teams, coordination is extremely important and, in some cases, practically a requirement. Even one player on your team, if he or she does not know what to do, can prevent you from obtaining the achievement.

To prevent unnecessary frustration, only ever attempt such difficult achievements in an organized group. Your gameplay will become much more efficient with a team of people you can rely upon. If you can’t assemble a group of friends on your own, you can, for example, visit the official Discord channel and ask there (link below) or look for a Battalion to join – here’s how.

Pro Tip: Do not get angry at randomly assembled teammates and do not expect them to work towards your goals. Abused players are more likely to sabotage your efforts than help you.

Some achievements require very specific (sometimes almost counterintuitive) vehicle setups to complete. In the video above, the players choose a durable vehicle with very high damage output as well as versatile armament. As a general rule, defensive objectives where you are expected to hold some ground, require well-armored vehicles (typically the Challenger ATDU) while assault objectives often require a combination of firepower and mobility.

Vehicle setups can differ from objective to objective and some vehicles For more information, please visit our dedicated article.

Pro Tip: If you aren’t sure, go with T-15 Armata. It’s versatile and has plenty of armor and firepower.

Make sure that everyone knows what to do. Tanks with heavy armor should not rush ahead lest they get flanked and destroyed. Instead, they should tie the AI opponents with their armor while faster vehicles with higher damage per minute do the flanking.

Every player in the team should know what’s going to happen – if needed, re-run the entire mission several times without aiming at the achievement to make sure everyone knows what’s going on at any point. Training is important, do not underestimate it!

Pro Tip: Your assembled team should run as many missions as possible together. At a certain point, you start predicting each other’s movements and reactions, leading to much better performance.

Like was already mentioned, some achievements are very difficult and require specific tactics. The Clock is Ticking achievement was thought impossible at the launch of the season but, as the video above shows, it is anything but.

Don’t be afraid to ask around on Discord and other Armored Warfare channels. There are experienced players out there who are more than willing to lend a hand, either by giving advice or by direct participation in your team. The Armored Warfare community is amazing and helpful – join and find out!

Pro Tip: A little politeness when asking will go a long way!

We hope that we’ve set you on your way to successful completion of these achievements and, as always:

Learn more about the epic skins, gifts and discounts we’ve prepared for you!