Update 0.37 is going to bring multiple new features to the game and today, we’d like to tell you about the first one, which is also one of the more important ones. In September, we’re going to be introducing Burlak's replacement – the TAM 2IP Tier 7 Premium Light Tank. 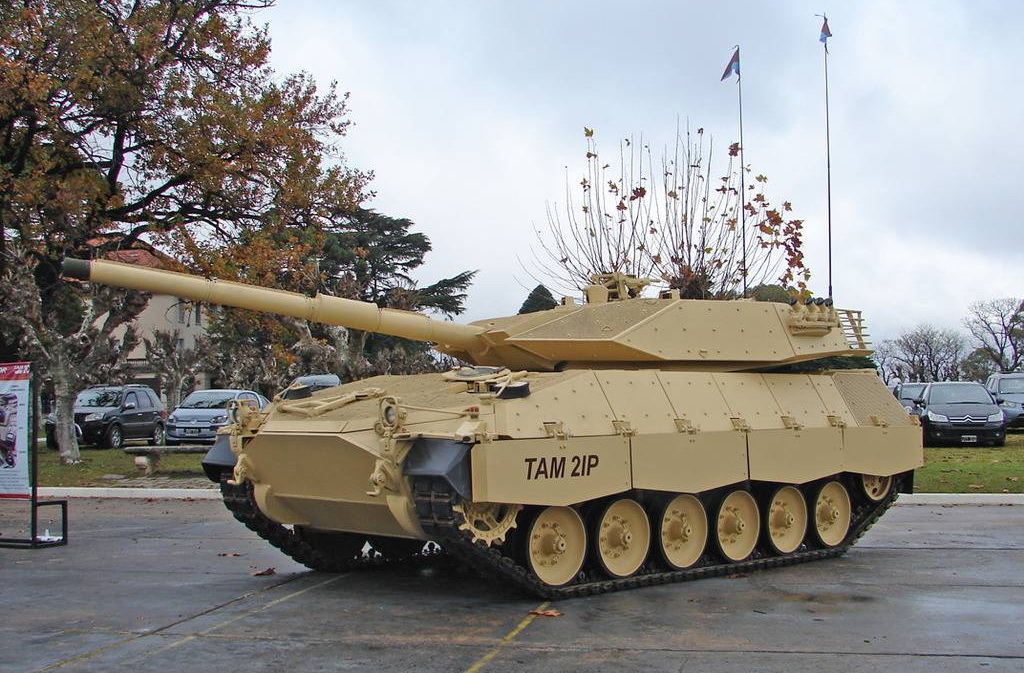 The name TAM stands for “Tanque Argentino Mediano”, or Argentinian Medium Tank in English, making it fairly self-explanatory, because that’s what TAM is about. As many things Argentinian, it is of German origin and its history goes all the way back to the 1970s.

South America in general is, when it comes to arms, a really interesting place, depending how you look at things. After the Second World War, the continent was flooded with cheap American surplus with a considerable portion of obsolete WW2 armored vehicles ending south of the Mexican Gulf. Nothing strange about that, but many South American militaries would then upgrade and keep these vehicles operation for decades. Some derivatives of WW2 vehicles are currently still in service.

This strange state of things is based on the principle that you don’t really need cutting edge armor when your opponent has the same junk as you. Combine it with the usual poverty and political instability in these countries (preventing any side from selling them modern tech) and you have a perfect recipe for making really old armor last forever. 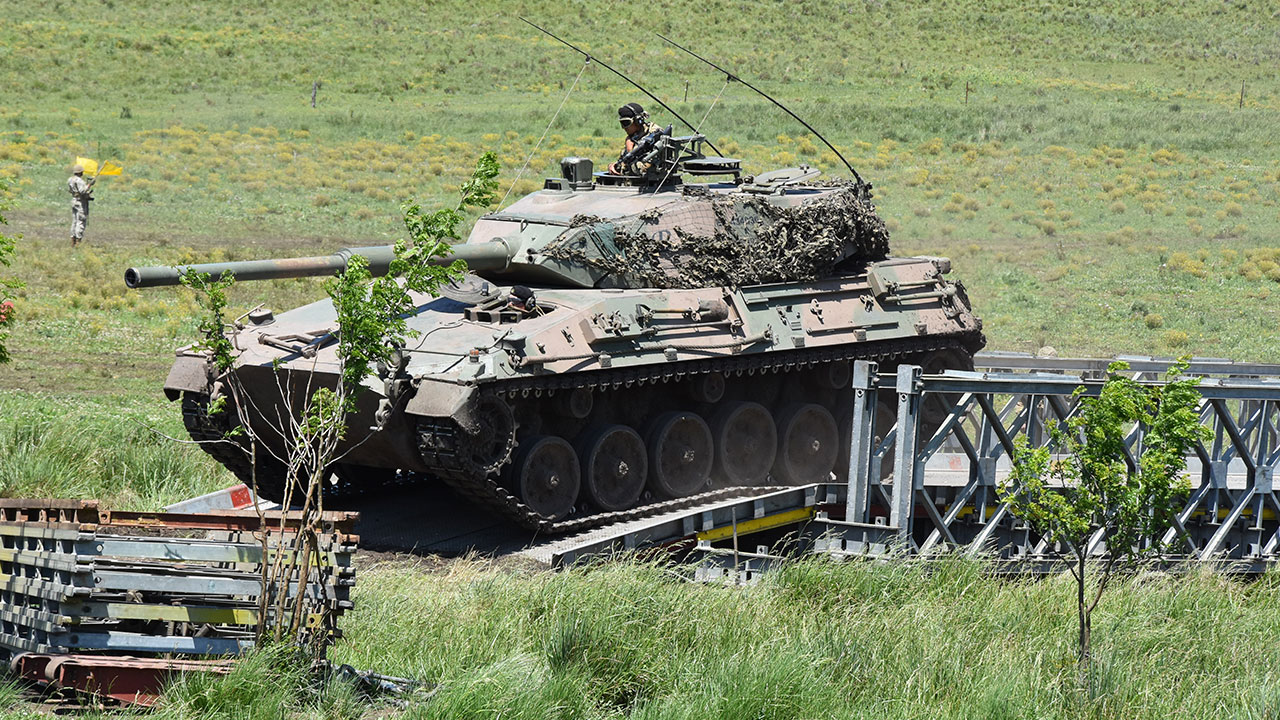 There are, of course, exceptions to this. Argentina, for one, prides itself in having developed domestic industry and wealth to match and being armed with leftover junk in the 1970s just wouldn’t do, especially not when your northern neighbor is large Brazil, with whom you have an ongoing land dispute over the Alto Paraná basin.

The Argentinians first tried to get some more American equipment in addition to their old M3 halftracks and Firefly Shermans, but the USA wouldn’t sell. Europe was the next best option and Argentina managed to obtain 80 AMX-13 Light Tanks in addition to 180 AMX-13 based APCs. Not bad, but not exactly groundbreaking and no match for more modern tanks that were starting to appear in the 1970s.

To deal with the situation, Argentina launched a program together with Germany in 1973 to develop a new tank in the medium category. Realistically, the TAM is more a Light Tank than anything else, but the reason they went for the Medium designation was to differentiate it from the AMX-13 Light Tank, which really is a lot lighter.

The reason why they chose this weight and capability category was simple – price and, more importantly, Argentina’s infrastructure. For one, Argentina is a diverse country when it comes to terrain types, and its roads and bridges couldn’t support sixty-ton behemoths. What Argentina was looking for was something with the firepower of an MBT, but in the 30 ton category. 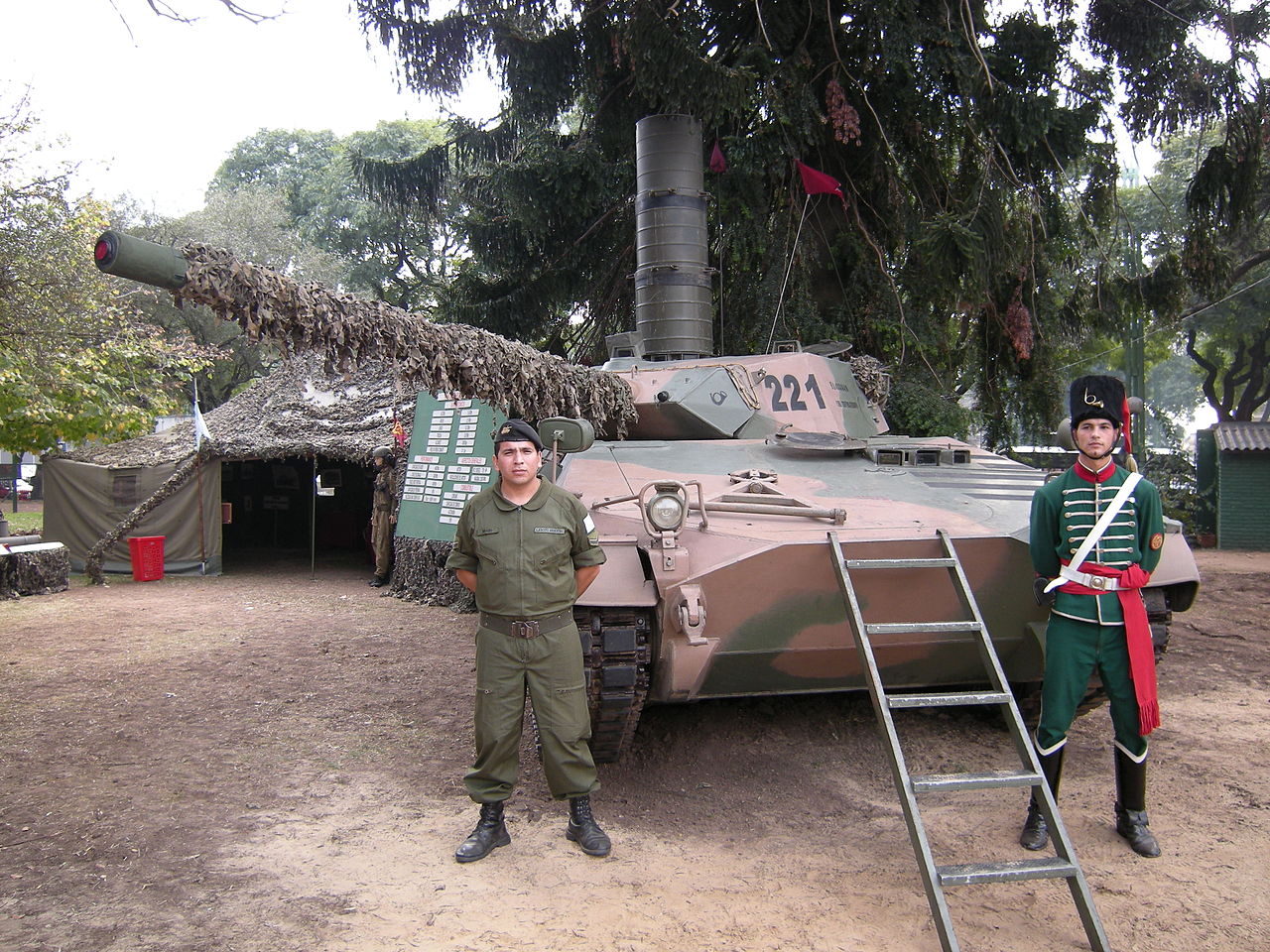 Additionally, Argentina was looking to use the same chassis for a number of other variants, primarily an IFV, but also an SPG, a self-propelled rocket launcher, a command vehicle and several more. Part interchangeability was the key here, as not only it was a practical solution, but it was also something Argentina was used to from the AMX-13 chassis.

The result of the endeavor was a platform based on the West German Marder IFV. The tank variant, which we’re discussing today, had fairly light steel-only armor (frontal protection against 40mm autocannons), although the engine was located in the front, adding to the survival chances of the crew considerably.

The tank was armed with a variant of the Royal Ordnance L7 105mm rifled cannon, which was an excellent choice at the time, offering both great firepower and access to NATO standard ammunition. The gun was modified in Germany and license-manufactured with some modifications in Argentina under the designation FM K.4 Modelo 1L. The vehicle was powered by a 720hp MTU MB883 Ka500 diesel engine, giving it, as you can imagine, excellent mobility, since it was so light. Its maximum speed was 75 km/h.

Overall, it surpassed Brazil’s M41 Walker Bulldogs in practically every way, giving Argentina a distinctive edge. But, unfortunately, the production was delayed and hampered by budget cuts. The production ran between 1979 and 1983, when it was stopped due to a lack of funding. It was renewed a decade later, in 1994, if only for a year. Overall, 256 TAM tanks were built and 218-231 (sources vary) are still in service to this day alongside Austrian SK-105 Kürassier Light Tanks. 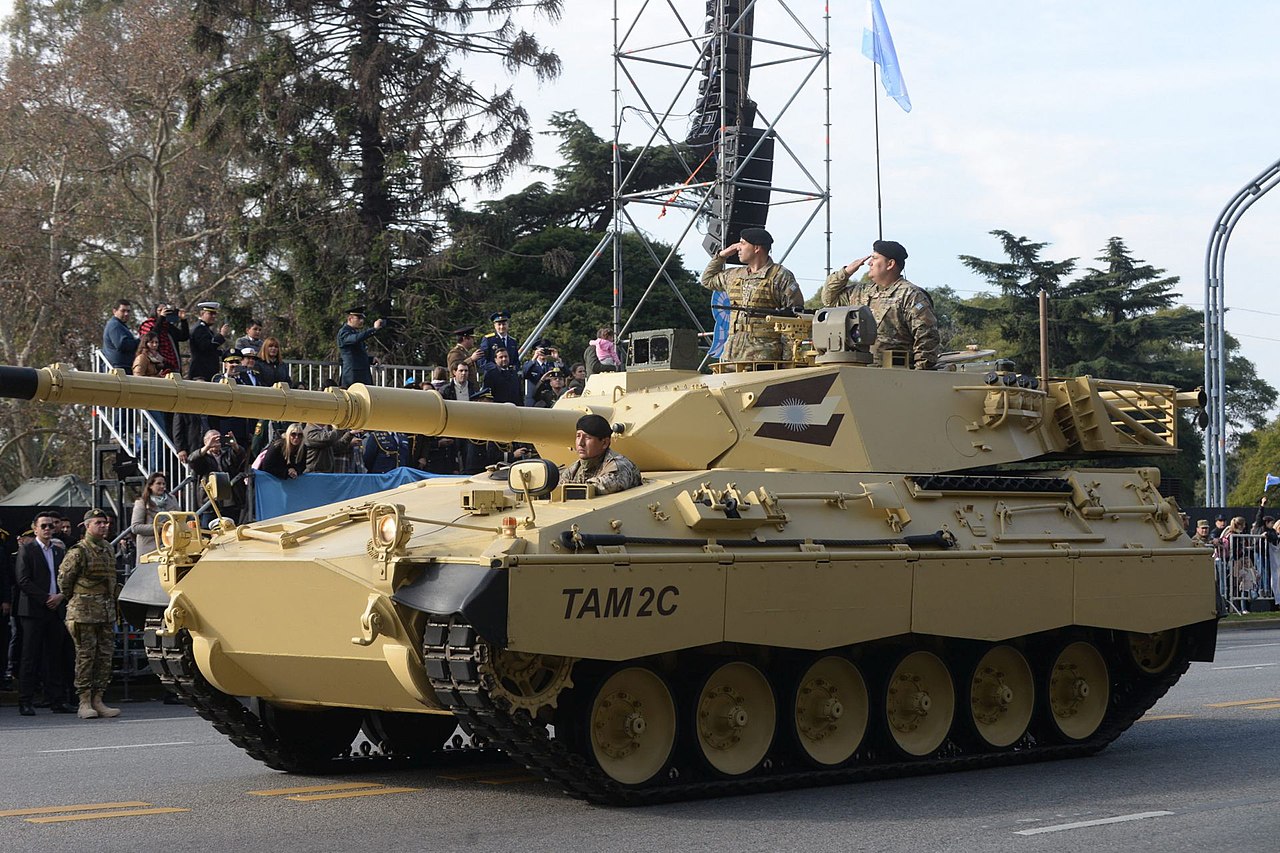 Which is a problem for Argentina. By now, these tanks are fairly obsolete and Brazil has long since replaced its Walker Bulldogs for Leopard 1 and M60A3TTS MBTs. The TAM tanks were never exported, although not for the lack of trying. Potentially interested parties included Malaysia, Panama and Ecuador, but each of these tenders fell through for one reason or another. Argentina even attempted to export the tank to Iran and was prevented by doing so by Saudi Arabia and Israel’s influence. As a result, the production plant closed in 1995 and all the produced TAMs stayed in Argentina.

Since 2010, there have been several attempts to upgrade the TAM with Argentina ordering 74 of its TAM tanks modernized to the 2IP standard with the entire upgrade process taking place in Argentina at Arsenal Group 601 (Agrupación de Arsenales 601).

However, so far, all of them have have failed due the lack of money. The first one was the TAM 2C prototype by Elbit with multiple firepower-related upgrades, but was never accepted because it was too expensive. In 2015, another prototype was unveiled – the TAM 2IP. 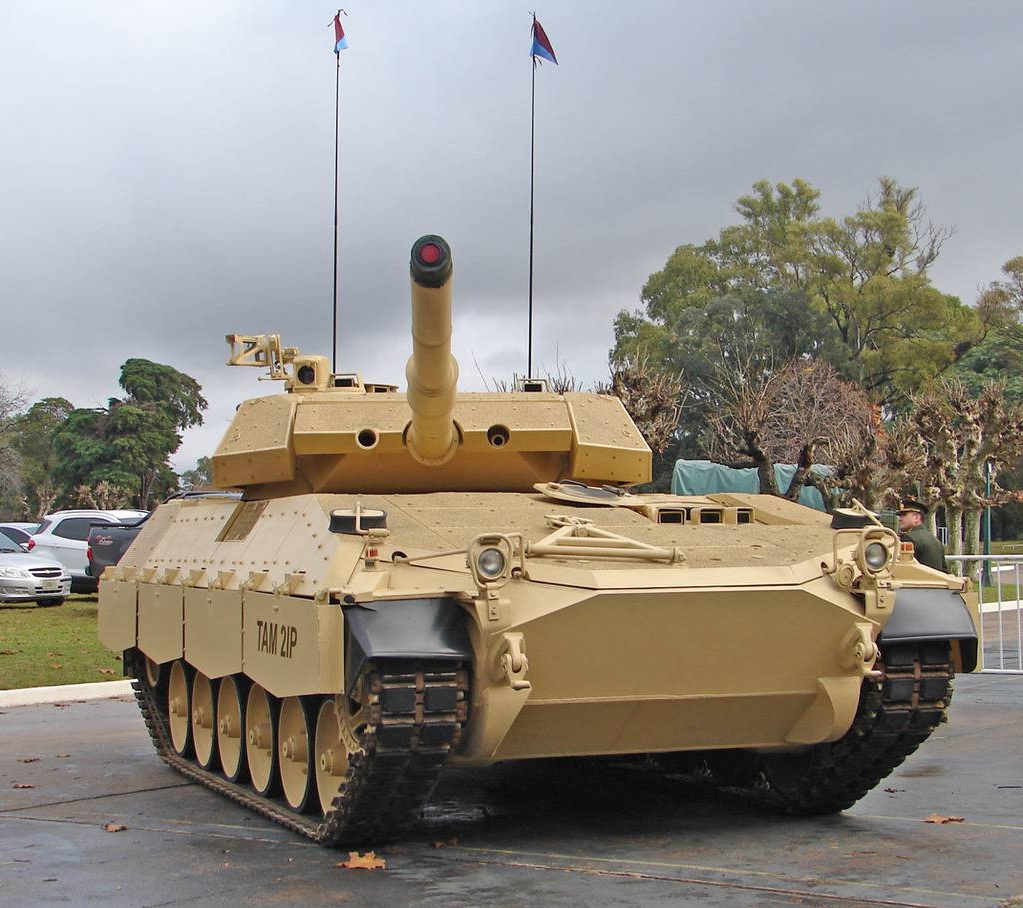 Right off the bat, it’s clear that there’s only one reason behind this upgrade – the lack of funding to procure new MBTs. While buying new tanks might sound easy (and there are many options on the market), it is anything but. The tanks represent only a fraction of the total costs with the rest being the supply chain, training, repair facilities, ammunition and many other elements. In this regard, it makes sense that the Argentinians would choose to upgrade. With that being said, it seems that many of TAM 2C’s firepower upgrades – including new FCS and gun optics – have been dropped.

On the other hand, the vehicle received a new passive composite armor set that is based on IMI’s Iron Wall design, which is mostly effective against various EFP-type threats. This is a weird choice. Against kinetic threats, the armor offers relatively poor (STANAG 3659 Level 4) protection against 14.5mm machinegun bullets, which would make the combined side armor resistant to something like 30mm autocannons. EFP threats typically exist only in asymmetrical warfare, not something such a light vehicle would be very useful in.

A prototype of the TAM 2IP variant was delivered in 2016 in order to undergo military trials – and that was it. In retrospect, it’s clear that the project once again fell apart due to Argentina’s chronic funding shortage. Relatively recently, in February 2021, news broke out about “Argentina and Israel returning to former cooperation” with the first deliveries of upgraded TAM tanks scheduled for 2026. It seems that at least in this sense, the TAM and the Armata program have a lot in common. 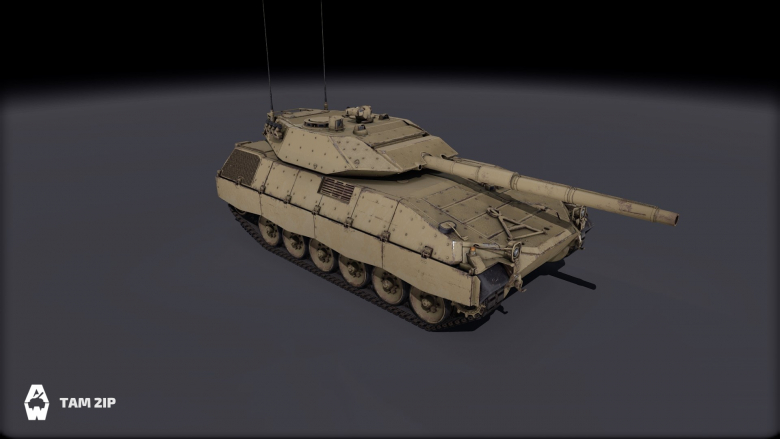 In Armored Warfare, the TAM 2IP will be a Tier 7 Premium Light Tank.

While featuring thin armor and average acceleration only, this Light Tank will be all about one thing – damage output, making it especially suitable for PvE. On the other hand, it will also feature a very special ability called Laser Lock, which will come in handy in all sorts of situations. But let’s start, as usual, with its armor.

The armor’s there – and that’s about all that can be said about it. This tank’s thin steel plates will protect it roughly against 30mm autocannons, but little else. No APS or any other special systems will be present.

Moving on to its mobility – the vehicle weighs 30 tons and is powered by a 1000hp diesel engine, which is more than in real life, but we need to make sure the acceleration doesn’t lag behind what’s expected of this vehicle class. We’re looking at a maximum speed of 75 km/h. It will take 3.8 seconds to accelerate from 0 to 32 km/h, although this value will be possible to reduce to 3 seconds by unlocking an additional progression module. Additionally, the Override Active Ability will be available from the start.

And, finally, there’s the firepower. Not to worry, things get better here. Much better. You see, the tank is armed with a 105mm rifled gun that’s very decent even in its basic form, which includes 3.8 second reload time, 0.1 accuracy and the following shells:

Furthermore, an improved APFSDS shell can be unlocked via additional progression:

But that’s not all. Additional Progression will also give you a choice between two firepower upgrades. 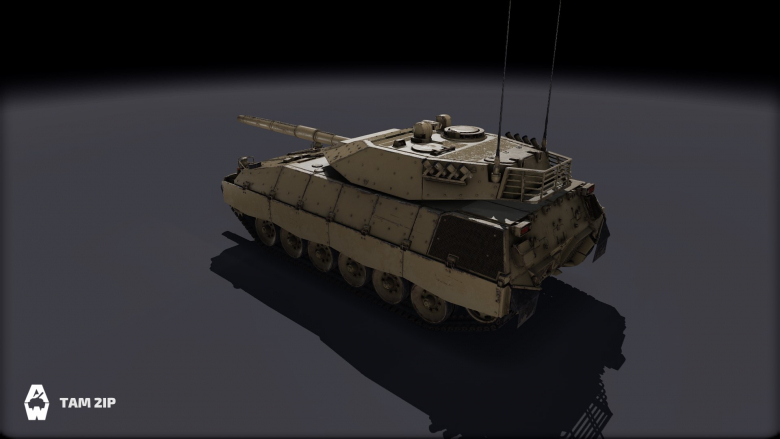 The first upgrade will be a two-round Ready Rack for the gun with two seconds between shots, followed by 4.3 seconds of reloading time. To save you the number crunching – you will effectively trade a little damage per minute (roughly 100 points) for the ability to double tap. This can come in handy in situations where burst damage is more valuable than sustained fire.

The second choice will be a new Active Ability called Laser Lock. This is a brand-new mechanism unique to this vehicle. Pressing the Active Ability button will toggle the ability on and off. When activated, several things happen:

This beam does not influence your camouflage factor, but it is visible whether you are spotted or not. In other words, it will draw attention to your position and will allow the enemies to fire at your position blindly. Deactivating the ability also takes a little time and is followed by a 10 second cooldown. Please note:

Once again, please note that the abovementioned feature description hasn’t been tested yet and represents the initial stage of the feature. Changes are not only possible, but also likely. Feel free to submit your feedback on our Discord!

As for the rest of the vehicle’s traits, it’ll have 430m of view range, 25% camouflage factor and a hull traverse rate of 36.55 degrees per second.

At first glance, the TAM 2IP will be a rather standard damage dealer and a versatile Light Tank, but in reality, the playstyle will definitely depend on the final version of the Laser Lock ability. As you can imagine, this ability will require thorough testing, which is why the tank itself will not be available (even on the Alabino map) right upon the launch of Update 0.37. Instead, the Burlak contract will be prolonged by 9 days with the TAM 2IP contract only launching after September 30, 2021.

Either way, we hope that you will enjoy this new Contract reward and, as always:

Learn more about the next Special Operation, which takes place in Batumi