One of the most common pieces of feedback from the Player versus Player community concerns the lack of what’s commonly referred to as “end-game” – a game mode that would test the abilities of the contestants to the limit. We are happy to announce that we’ve been working for a while on just the thing – we call it Ranked Battles. 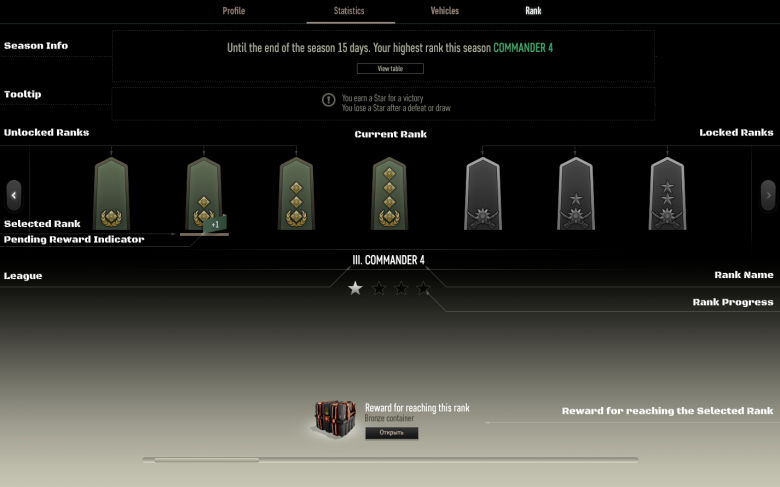 Ranked Battles will be a separate mode and its availability will be based on seasons (much like the earlier-tested Lords of War) in the main menu as an alternative to PvP, PvE and Global Operations.

The core of the idea is rather simple. Mechanics-wise, the mode will work like standard PvP, but with several exceptions. The biggest one is that the participants will not be matched using the standard rules, but based on their league association.

There will be several leagues, scaled by player quality. Each league consists of several ranks. Each player starts with the lowest rank of the lowest league. The rank can be increased by collecting stars. Stars are naturally collected by winning battles.

Collect enough stars and you’ll earn a rank. Climb through each league’s ranks to enter the next league.

Losing battles, however, costs stars – lose enough battles and you drop by a rank or even a league.

Apart from the standard PvP-level income, achieving each rank and league brings players unique rewards that range from Loot Crates and Premium Time to unique player portraits, titles, decals or even whole vehicle skins. There are two types of rewards:

Each season will have different rules and parameters, ranging from team size to Tier and Class limits as well as its designated hours (Ranked Battles will typically only be available during a certain time period of the day).

Platoons will be typically allowed (unless the season rules state otherwise), although only players roughly equal in rank will be able to form a platoon and team platoon equality will be strictly observed to ensure maximum fairness.

We are planning to start a testing season later this year and hope to see you all there!

On the 30th of January, both Open Beta servers will not be available for an extended period of time in order to implement Update 0.23.4374