The Italian-made Centauro 120 is an upgraded version of the older Centauro B1 tank destroyer, originally developed for the Italian military.

The history of the Centauro program goes back to the late 80s and very early 90s, when the Italian military issued a request for a tank destroyer with firepower equal to the older Leopard 1 main battle tank (and its Italian derivate, the OF-40). Both vehicles carry advanced versions of the British Royal Ordnance 105mm L7 rifled cannon and it was that weapon caliber that was selected for the tank destroyer project.

Another important demand was increased mobility for the entire platform. Experiments and evaluations eventually led to the decision to make the tank destroyer a wheeled vehicle with a turret mounted 105mm rifled gun (105mm low-recoil OTO Melara). The vehicle eventually entered production and service in 1991 under the designation of B1 Centauro and to this day well over 500 vehicles based on the Centauro platform have been built (including the Freccia IFV). Most of them are serving with the Italian military, but some were exported to Spain (84), Jordan (141) and Oman (9). The Jordanian Centauro vehicles, however, come from Italian surplus. 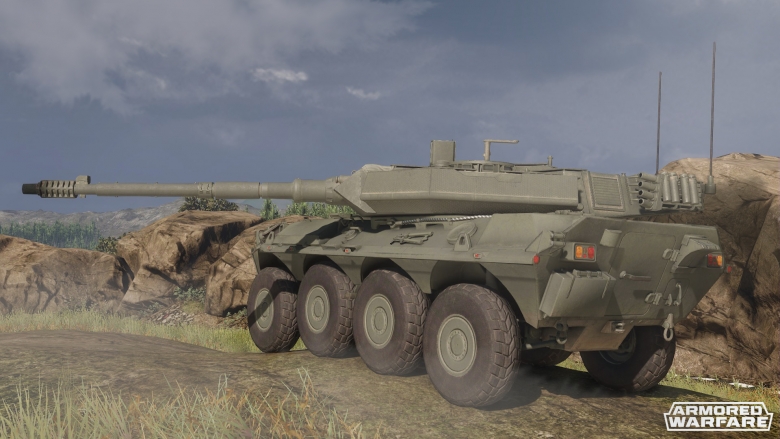 The Centauro 120 is an advanced version of the vehicle, designed with the goal of further improving firepower by arming it with the OTO-Melara low-recoil 120mm smoothbore gun in a new HITFACT turret. The HITFACT is a three man turret developed by OTO Melara to carry either a 105mm L/52 rifled gun or 120mm L/45 low recoil gun. Please note that the 120mm L/45 gun is not a variant of the Rheinmetall 120mm smoothbore – it can however fire standard NATO 120mm ammunition including advanced APFSDS rounds. This makes the Centauro an incredibly potent tank killer for a fraction of the price of a main battle tank. The gun is also extremely accurate thanks to an Italian HITFACT fire control system with the option for potential buyers to install a full scale of cutting edge optics. Both weapon variants (105mm and 120mm) share the same gun depression and elevation (-6/+16 degrees) but one of the drawbacks of the design is the amount of ready rounds carried (14 rounds in the turret and 26 in the hull).

The turret is made from steel armor plates and composites installed on a military-grade aluminum frame. It is not that much heavier than the original turret thanks to its advanced design and the Centauro 120 does not lose the mobility of the original B1 version – it is worth noting, however, that the 105mm variant of the HITFACT turret is 700kg lighter than the 120mm one (5100kg and 5800kg, respectively). Compared to the original Centauro turret, protection was improved – the turret can now withstand the fire of up to 40mm caliber APFSDS rounds. Several secondary weapons (including NATO 7,62mm and 12,7mm machineguns) can be installed into the turret as well. The turret can also be fully stabilized.

The vehicle (the export variant for Oman) is powered by an improved Iveco 650hp engine. Even with its somewhat increased weight, the vehicle retains an impressive maximum speed of over 100 km/h.

Unlike the mass-produced Centauro B1, only a few Centauro vehicles with the 120mm gun were made. Nine were purchased by Oman in 2008 (with the option to buy two dozen more) and the vehicle was also allegedly trialed in Russia, but considering that OTO Melara is already working on a vehicle to replace the Centauro, it is possible that the 120mm variant will only see further service on Centauro's successor.

In Armored Warfare, the Centauro is a tier 9 tank destroyer. Its main feature is a very high damage per shot value as well as sustained damage over time. Its 120mm gun is devastating even against heavily armored opponents, such as the main battle tanks, and it is capable of firing the most advanced NATO rounds such as the M829A3 depleted uranium APFSDS. On the downside, the massive blasts of the OTO Melara smoothbore seriously reduce the vehicle's camouflage factor, making firing from the same position for extended periods very risky. Another drawback is the virtual absence of armor – the thin skin of the vehicle can practically only protect it against low-caliber automatic cannon fire, even though this issue is somewhat mitigated by the presence of a smoke grenade launcher amongst the available upgrades.

Fortunately, the Centauro 120 is also quite mobile thanks to its low weight and upgraded engines (up to 800 horsepower) and this feature allows it to avoid danger, making it a deadly hit-and-run fighter. Mobility is key to the Centauro, as firing off a few well-placed shots and relocating will leave opponents confused, reeling from the blows and searching for an enemy that is no longer there.
Share