Obsidian Entertainment and My.com are proud to introduce the newest addition to Armored Warfare, Update 0.11!

Update 0.11 does bring several major features that include:

The following Tier 9 vehicles will be available through the Token system: M1A2, CRAB, BMPT-72, Leopard 2A6, T-90MS, B1 Draco, Challenger II, M8 Thunderbolt. 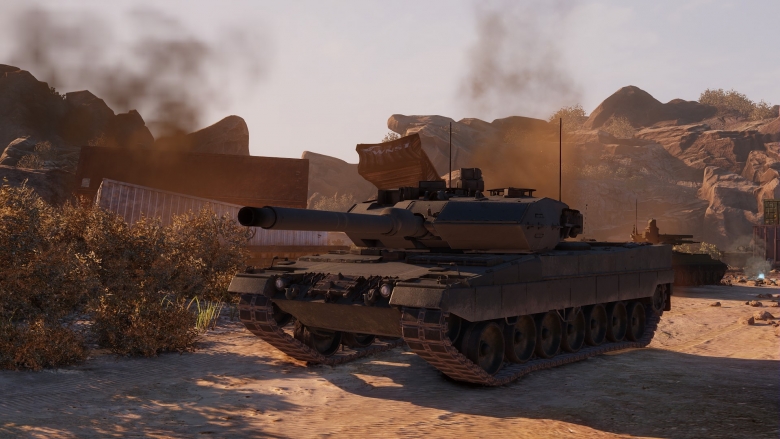 Learn more about the Tier 9 vehicles in our dedicated article. 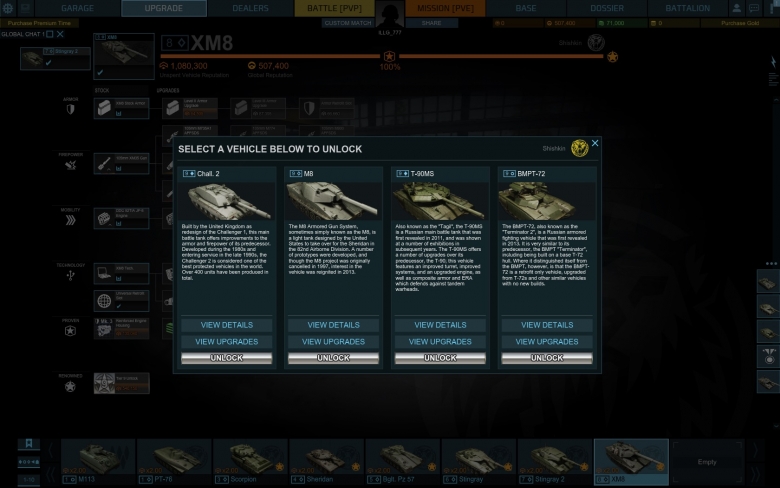 You can learn more about the Token system in our preview article.

Players can now create custom matches from the garage. Upon entering the garage, players can select the 'Custom Match' option found under the PVP queue button. Selecting Custom Match will bring up a new interface which allows players to browse, sort and filter through existing custom matches or create their own. 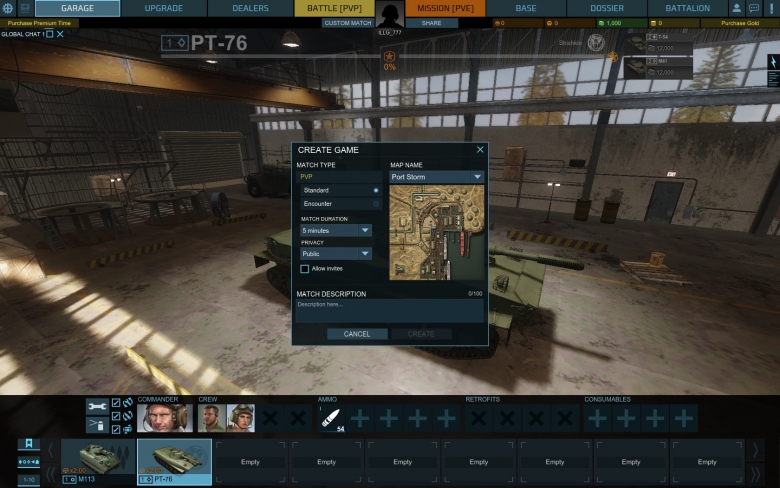 Clicking 'Create' brings up another window which gives players the option of creating a PvP match with the following parameters:

Upon creating a match lobby, players may then choose a side, lock teams, invite their friends, chat with others in the lobby, edit the custom match or delete the lobby. Additionally, 4 non-participating players can watch the match as observers. 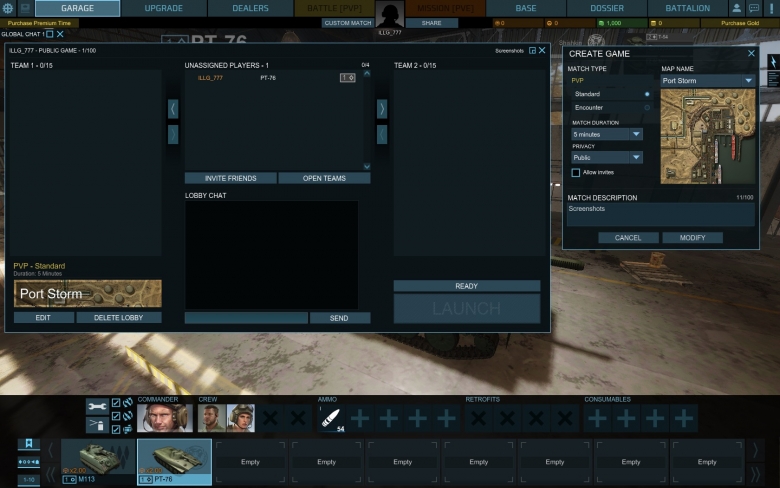 Please note: changes compared to the first iteration published in the preview article are marked in bold.

Reduced the vehicle damage explosion radius of direct-fire (non-artillery) HE shells to reduce the instances where the explosion would deal damage to a distant weak point on the armor. Also updated the HE damage scalars on a per-Tier basis to improve the ability of HE to deal damage to weaker armor. The result of these two changes is that accurate HE shots against on or close to weak armor will deal more damage, while less accurate shots against strong armor will deal less damage.

We have updated the spotting indicator with three states to better inform players of their current status:

The BMP-3M is an odd case. It has good spotting range and HP for an AFV, but its unusual handling and lack of camouflage make it tricky to utilize as a traditional AFV. In telemetry, it's performed relatively well, but it lacks a real niche. We've made some significant tuning improvements to retool the BMP-3M as a hybrid AFV/brawler by further increasing its hit points, improving its autocannon damage, and improving its accuracy. We'll continue to pay close attention to see if these changes have made it perform too well or if they prove insufficient to make the vehicle compelling to play.

The Challenger 1 has been performing below expectations. While it does have strong armor, its weak points, low penetration, and lower HP than the Abrams, coupled with lower speed, have made it perform below par. To help bring it up to par, we've bumped its penetration up to levels more comparable to other MBTs of the same tier and increased its hit points, which we feel will give the Challenger 1 the necessary resilience needed to be an excellent brawler. Additionally, we've significantly buffed the frontal sides of the turret and hull enough to bounce some MBT shells, along with strengthening the driver's sight weak point and removing the gunner's sight weak point.

When evaluating the Ariete we found its side armor to be performing below what players should expect from a tier 8 MBT. As a result, the appliqué armor package on the Ariete has had its effectiveness more than doubled and we've buffed the sides of the turret, allowing the vehicle to better resist shells against the tank's hull and turret sides with the armor package on. The front of the turret also received a small armor buff, which included removing the gunner's sight weak point, allowing the vehicle to be more effective in hull down positions against other Tier 8 vehicles. The goal is to allow it to be a mobile scrapper, but still allow players to find opportunities where it won’t be as easily penetrated.

Once the fiercest vehicle in Armored Warfare, the mighty Scorpion has fallen upon hard times. While its agility is still exceptional, the soft stat modifiers that were used to bring the Scorpion into line when it was over performing have no longer proven necessary in light of the changes to High Explosive rounds. With that in mind, we've made some improvements to the Scorpion to bring it back in line.

The Leopard 1A5 is performing below standards for the tier. We've given it significant buffs to targeting time and accuracy on the move to make it superior to the earlier vehicles in the same line in those regards, as well as a boost to damage.

The Leopard 2 had too many weak points from the front that could be capitalized on and so we've made adjustments to several key areas. The Leopard 2 still retains the critical weak point found on the driver's hatch, but the top portion of the upper glacis has had its armored bumped up enough to have a better chance at deflecting high penetration shots. Additionally, the turret ring's armor has been massively increased (before it was bugged to have little armor) in order for it to have a better chance at deflecting high penetration shots rather than being easily penetrated by auto-cannons. A large sliver of the lower glacis which was easily penetrable before has also been removed, as has the gunner's sight weak point. Combined, these changes will provide the Leopard 2 much greater frontal survivability.

Our previous M60A2 changes were a step in the right direction, but we still feel the M60A2 has a ways to go before it can excel as a high firepower brawler. To better improve the M60A2's intended play style, we've increased its standard round damage significantly, reduced its ATGM reload time and decreased the amount of time it takes to zero in on a target. The M60A2 remains inaccurate, which helps ensure that it retains its role as a close-range monster, rather than letting it be an overpowered sniper.

The M1 and M1A1 have both proven to be consistently dominant in their tiers due to a combination of their high health, excellent armor, superior vision versus other MBTs and good mobility. We feel that the strong frontal armor of the Abrams is an iconic feature, and thus we've chosen not to adjust that at this time. Instead, we've reduced its HP values to be somewhat closer to the other MBTs of the same tier. The M1 and M1A1 will still feature above average HP, but they will no longer be as dominant as before. With this change, we expect these vehicles will remain very strong and we will continue to evaluate them to see if these changes were sufficient enough to bring them in line with other equal-tier MBTs.

The OF-40 is performing below average on the EU server and about average on the NA and RU servers. While normally this wouldn't be enough of a problem to warrant stat adjustments, we recognize that the OF-40 doesn't feel like a fun upgrade from the Leopard 1, and we've given it some quality of life improvements to make the experience of playing it feel more rewarding.

While our last set of changes was a step in the right direction, the RDF-LT is still performing poorly compared to the Stingray and VFM. We've given it a minor increase to firepower as well as some more significant improvements to targeting time and accuracy on the move.

To bring the vehicle's weak points in line with the T-72A, the armor in the upper left portions of the cupola, the flat area of the sight and the roof of the vehicle have been increased to better resist high penetration shots. Given the easily penetrated lower glacis, the player should be rewarded more for protecting it with a strong turret, although the T-72 will still have several locations that can be breached with careful aim.

A full adjustment of the T-72A's turret armor was done due to the vehicle under-performing across the board, making it significantly better armored than before. Affected areas include the upper left section below the cupola, and the roof. The gun mantle and the lower areas to either side can still be penetrated by equal-tiered or higher tanks, but the vehicle should now be able to hull down more successfully even against higher tiered opponents.

Similar to the T-72, we felt the T-80 required additional armor around the upper left portions of the cupola, the flat area of the sight and the roof in order to increase the tank's resistance against high penetration shots and solidify the rest of the t-series as having high armored turrets with weaker bases.

We have updated the behavior for smoke shells so that the deploy effects occur sooner as well as reduce the time it takes for affected players to be obscured by the smoke. Also, we have updated the visual effect for the illumination rounds when they directly impact a surface before they are able to deploy in the air.

All PvP maps were checked in order to fix the visual and performance issues.

We've made several adjustments to this map to promote better engagements:

On the 24th of November, both Open Beta servers will not be available for an extended period of time in order to implement Update 0.11.1616

On the 1st of December, both Open Beta servers will not be available for an extended period of time in order to implement Update 0.11.1630