We’re happy to announce that the Last Patriot Battle Path campaign has just begun. Join Austin Harper in his effort to liberate the former United States of America from the scourge that is Enigma. Saddle up, commanders – it’s time for a ride of your lives!

This three-month-long American-themed campaign offers you the opportunity to get your hands on three very special reward vehicles, including the CATTB Tier 10 Premium MBT, but other valuable prizes are also available, including Commander Austin Harper, skins, decals and much more. You can find more information about the campaign in the Frequently Asked Questions section below and in our dedicated article.

In order to join the Battle Path campaign, please enter the game and click on the Last Patriot icon on the upper bar.

Simply put, you earn Battle Coins by completing missions and then spend them to raise your Battle Path level while earning Battle Path Premium vehicles, camouflages, player avatars, skins, decals and other goodies, including a reward tank with Premium status, the Tier 10 CATTB MBT. You can also get other Premium vehicles as well. 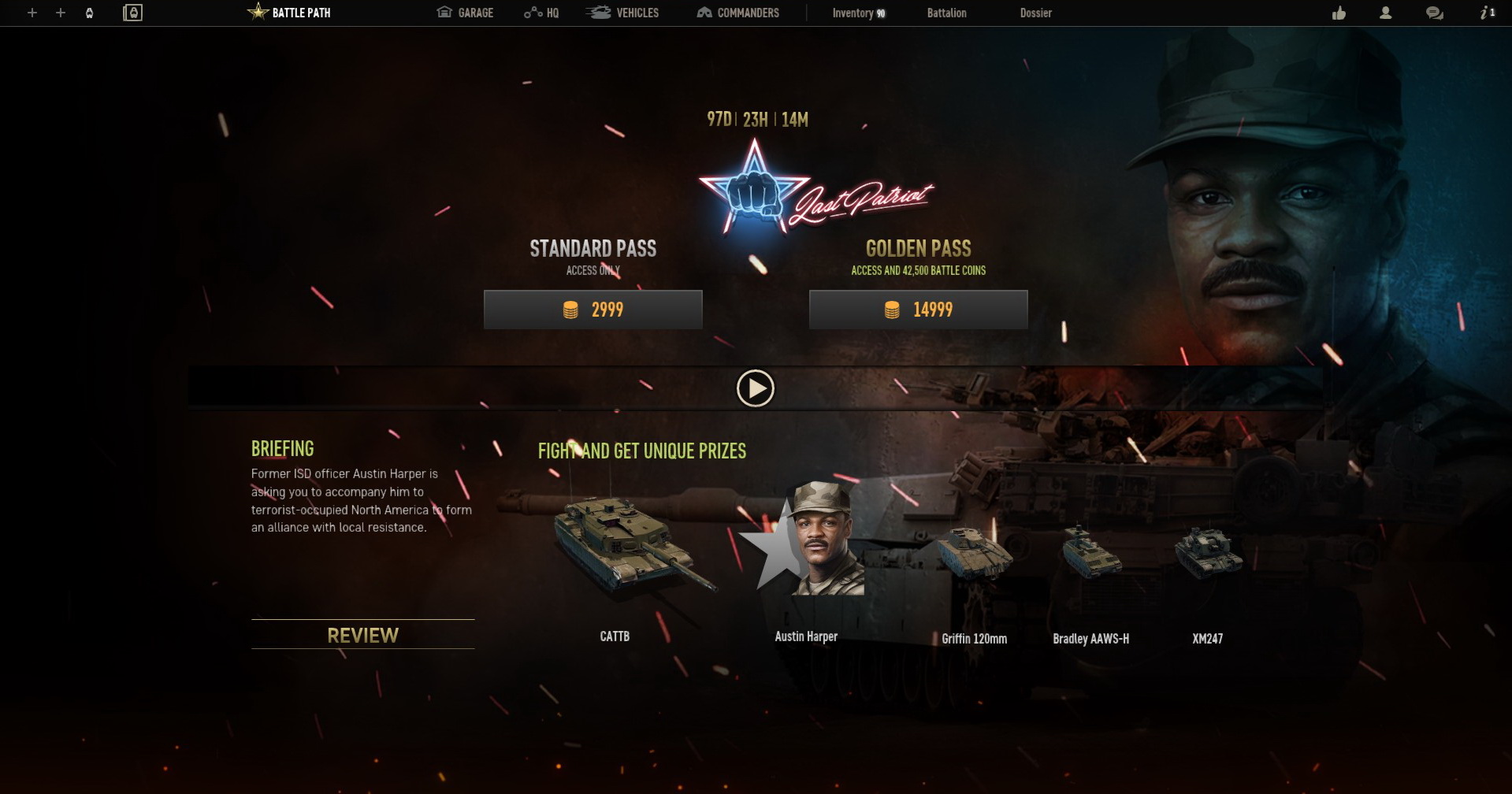 The Battle Path campaign is divided into four paths (mission chains), each with its set of many missions. Additionally, two sets of tasks are also available: 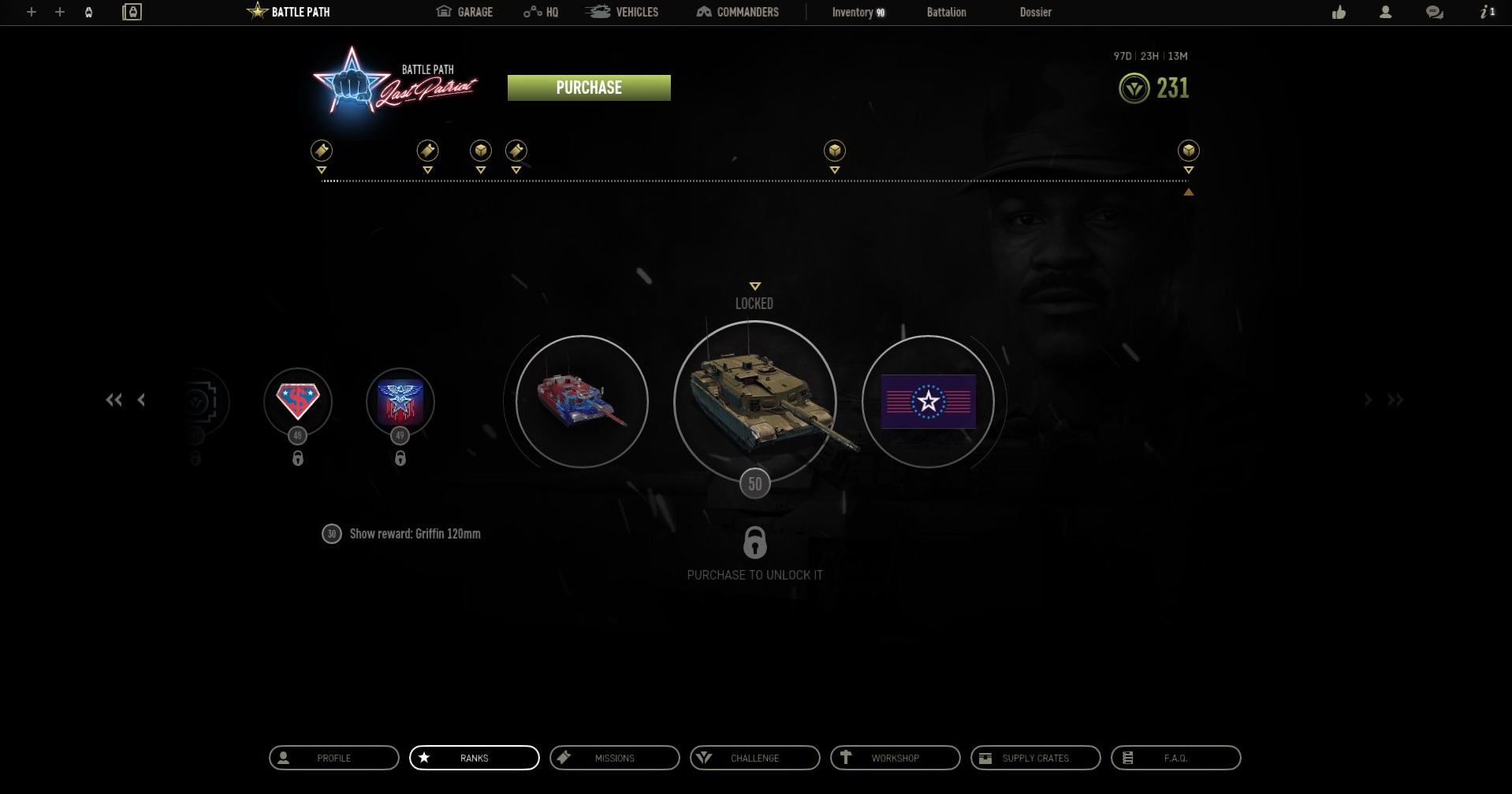 There are 50 levels in total. For reaching Level 50, you will a reward tank with Premium status, the Tier 10 CATTB along with a skin for it. An additional skin is available for completing further missions upon this vehicle’s acquisition.

In order to start a mission chain, you need a pass. You will receive a free pass on Level 1, 7 and 12 – you decide which chain you wish to unlock and when. In order to unlock the access to the fourth chain (the “Freedom” missions), you need to complete all the three previous chains first. 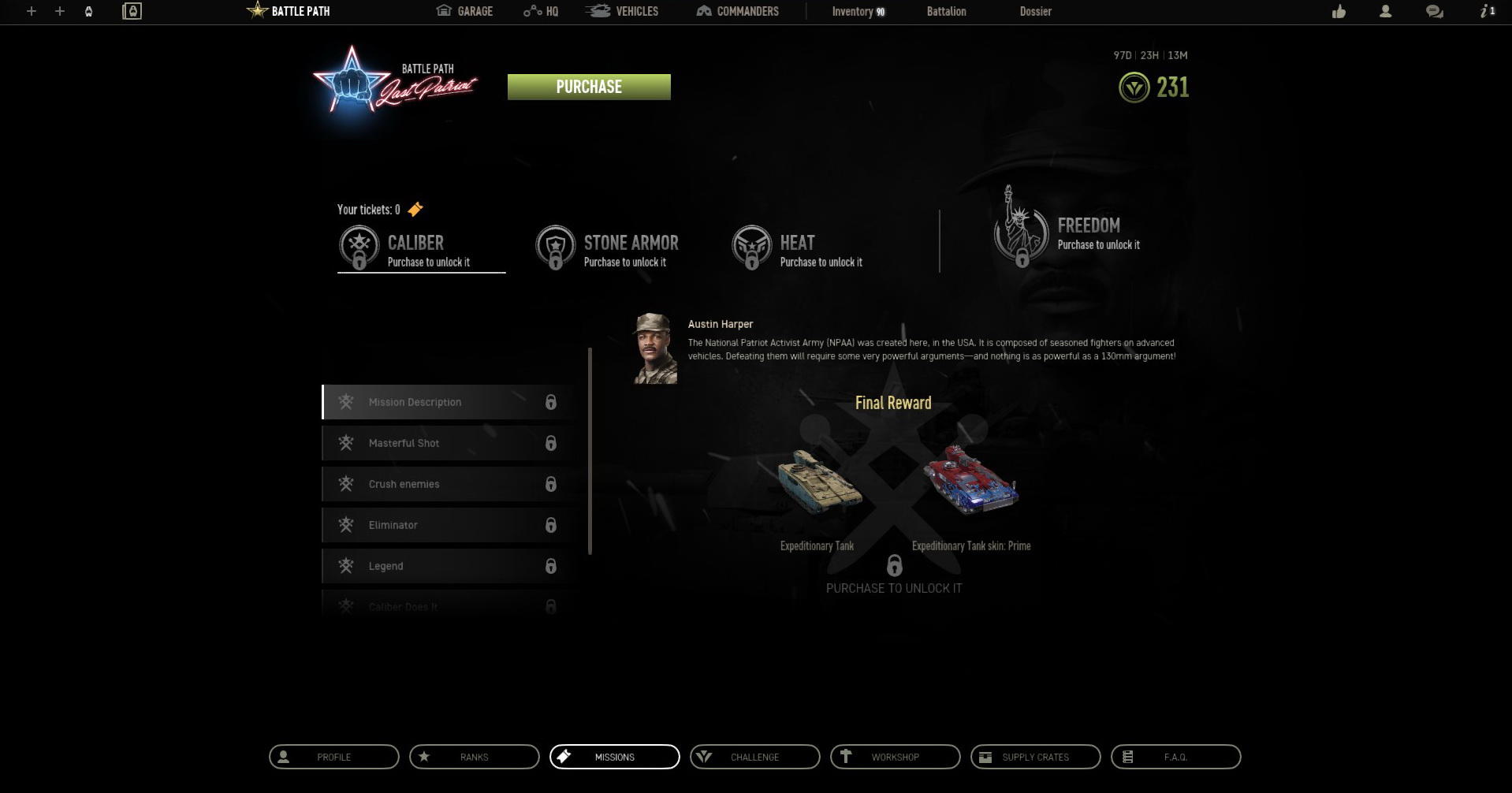 The next one only starts after the previous one is finished. You need to pick up your mission reward manually in the Battle Path window in order to activate the next mission. However, if you earn more than one pass and unlock multiple chains at the same time, it is theoretically possible to have up to three missions active simultaneously and to complete them all in one battle (if their requirements do not prohibit you from doing so). It is also possible to complete a Battle Coin mission, a regular chain mission and a Challenge at the same time.

Important: Please note that for the missions requiring to use HEAT (cumulative) rounds, HESH shells do count as well.

Do I also need a pass for the Freedom mission chain?

If I already own the Premium vehicles that are awarded as prizes, will I get their full price in Gold back?

In such a case, you will receive 500 Gold instead.

I’ve seen a reference to the Last Patriot crates. Can you tell me more about them?

The Last Patriot Loot Crates are in exchange for surplus Battle Coins. They include blueprint pieces of the Bradley AAWS-H Tier 8 Premium TD (along with a chance for that vehicle to drop directly) as well as pieces of Special Patriot Loot Crates. These Special Crates have to be first assembled and, upon doing so, they drop improved loot, including:

What else is new in this Battle Path? 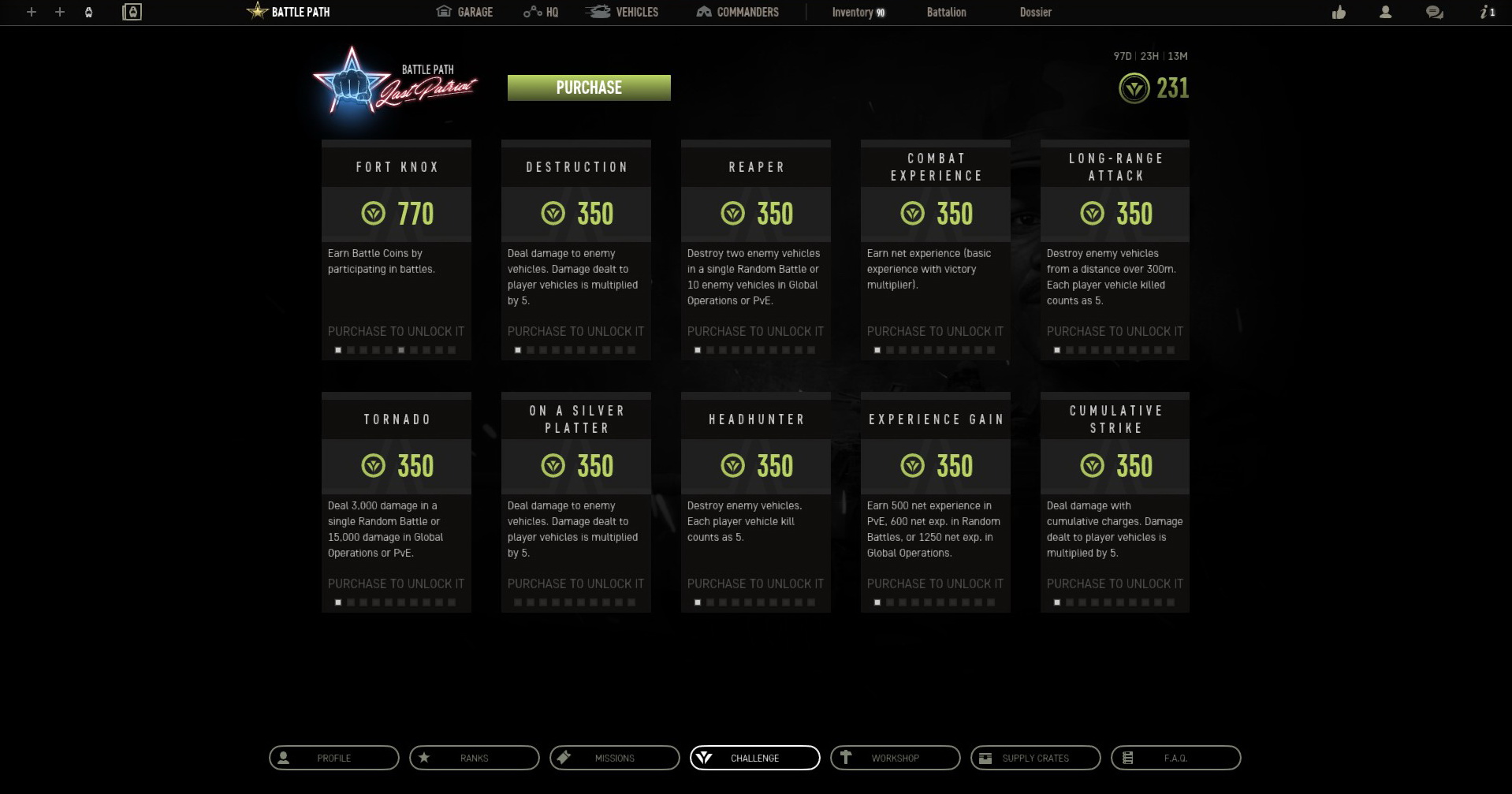 Workshop Battle Path tab will allow you to modify your Battle Path vehicles with additional performance-enhancing or modifying modules that will be available for completing a certain number of Battle Path Missions (chain missions or Battle Coin missions) or Challenges (even though the act of opening a Special Crate also counts towards these objectives). 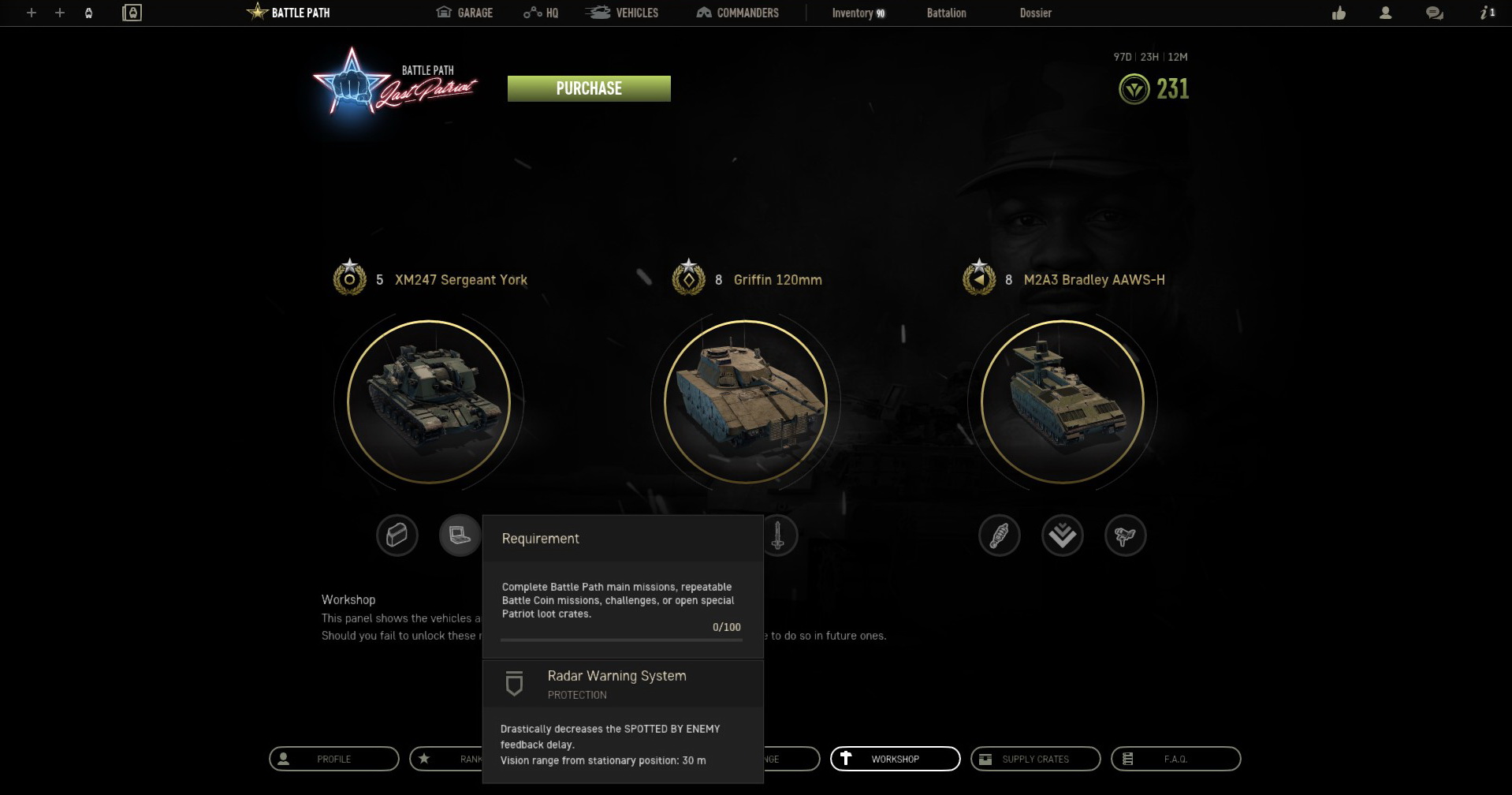 These modules include for example a module for the XM247 that will trade more mobility for fewer hitpoints or new, advanced shells for the Griffin 120mm.

Please note, however, that, unlike before, standard Contract Missions available to anyone DO NOT count towards any Battle Path progress.

Learn more about the reasoning behind the nerf of one of the top Battle Path prize, the CATTB Tier 10 Premium MBT