Today, we’d like to tell you more about an upcoming Russian vehicle called Kornet-D1. 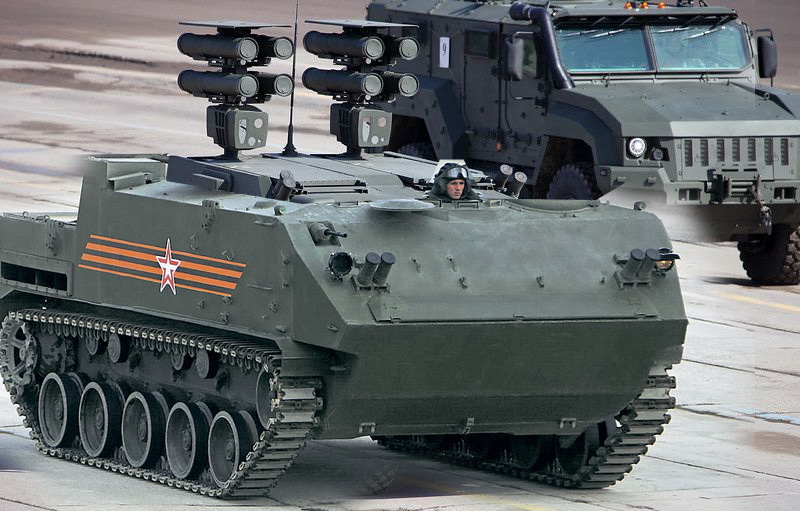 You are, of course, already familiar with the name Kornet, which belongs to a fairly modern family of anti-tank guided missiles. In Armored Warfare, we already have one Kornet-based vehicle, the Kornet-EM AFV, which is one of the deadliest Tier 10 machines available in PvP – and for a good reason; its quad missile launchers can wreak havoc upon unsuspecting enemies. However, its popularity is more or less hamstrung by the fact it is a wheeled vehicle and it is therefore more difficult to control.

This led us to an idea – why not put the ATGM platform on a tracked chassis? This, in turn, led us to the Kornet-D1-BMGSh project.

Here’s where things get complicated, so let’s start with a little history behind the vehicle. In June 2013, the Russian Ministry of Defense issued a set of requirements for a Tank Destroyer, which would be built on the BMD-4M chassis (Izdelie 960M). This Tank Destroyer was intended for the Russian Airborne forces (VDV) and would be armed with two Kornet quad-tube launchers in roughly the same configuration as used on the Tigr platform. In other words, these launchers were supposed to be able to traverse and were to be retractable into the hull.

In December 2013, a contract was awarded to Kurganmash (the producer of the BMD-4M) to develop this platform. Kurganmash started working on the project in August 2014 and, at that point, the vehicle received the designation Kornet-D1-BMGSh (BMGSh stands for “Armored Vehicle, Tracked Chassis”). And this is where the story pretty much ends. The project was obviously canceled somewhere along the way, likely in 2018. In 2018, an article came out about the future of the vehicle, stating that a prototype would take part in state trials in 2019, but this never happened and no prototype was ever built (or at least shown to public). No drawings of the project were published either, so nobody really knows what the machine would have looked like, although speculative fan-made renders do exist on the internet. 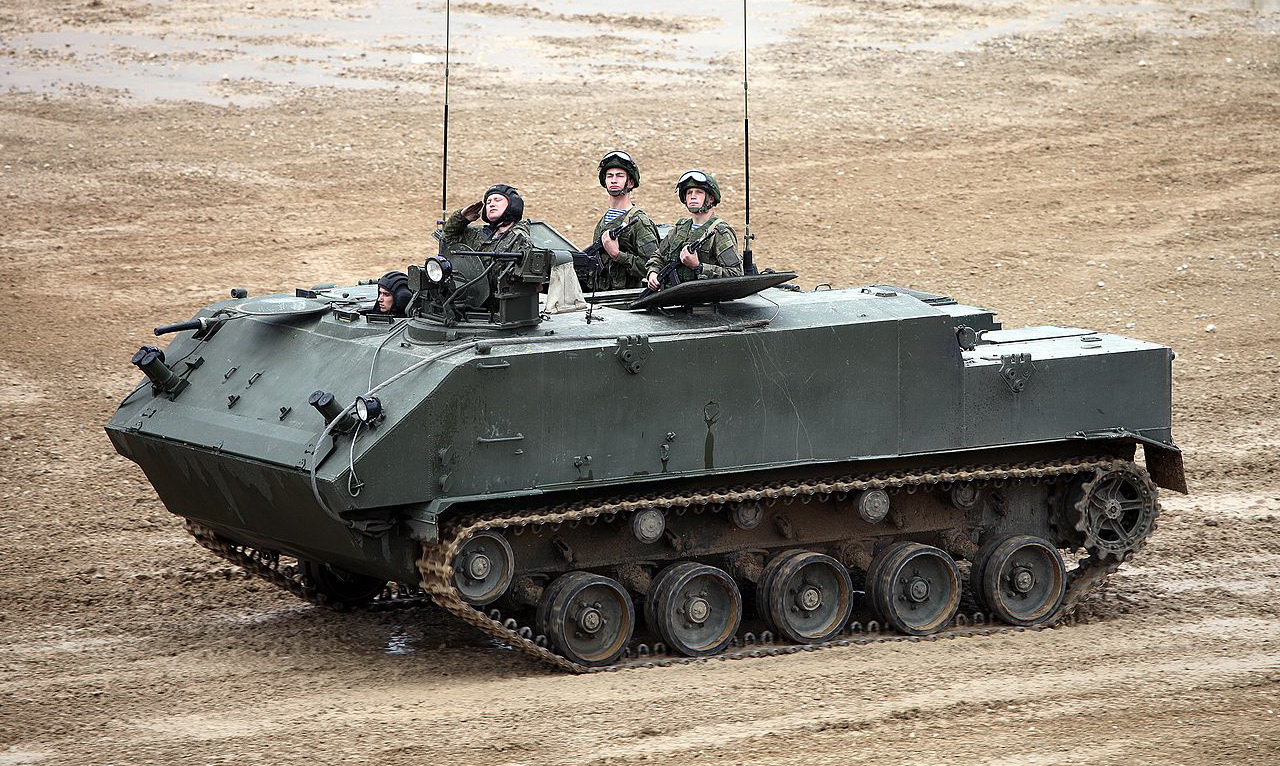 As such, the vehicle you see on the screens in this article is our interpretation of what the project could have looked like. With the aid of a military expert working in the arms industry, we created our vision of what the Kornet-D1-BMGSh was. Right off the bat, upon reviewing the dimensions of the BMD-4 platform, we decided that it simply was not large enough to house the dual-launcher Kornet system the way it was defined by the Russian Ministry of Defense. As an alternative solution, we used another vehicle from the BMD-4 family, the BTR-MDM Rakushka.

The Rakushka is an APC based on the BMD-4M chassis, developed for the Russian Airborne forces in 2015 or so. Some 50 vehicles of this type are currently in service, which allowed us to model the hull properly. Simply put, we replaced the troop compartment with the twin launcher system – that way, we are sure that the Kornet launchers would actually fit. Nonetheless, for all intents and purposes, this is a hypothetical vehicle and we hope that you’ll enjoy it despite the fact. We also dropped the BGMSh factory designation and will be simply referring to the vehicle as Kornet-D1. 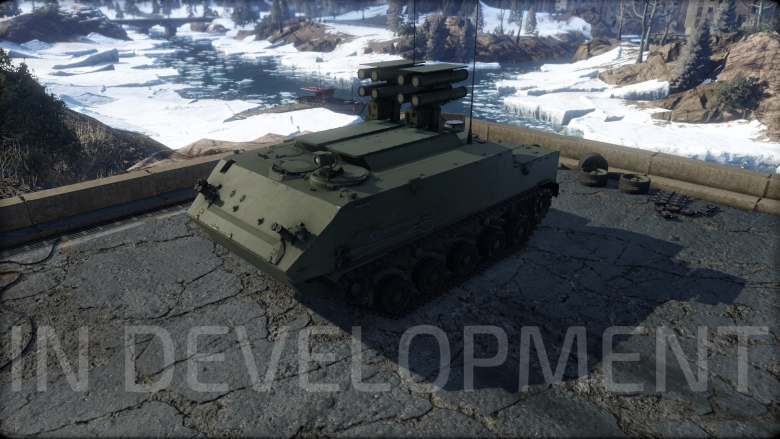 In Armored Warfare, the Kornet-D1 will be a Tier 10 Premium Tank Destroyer.

As the description above suggests, the vehicle will basically the Kornet-EM missile carrier, only with tracks. However, while that’s really the core of it, there will be more than one difference between the two. 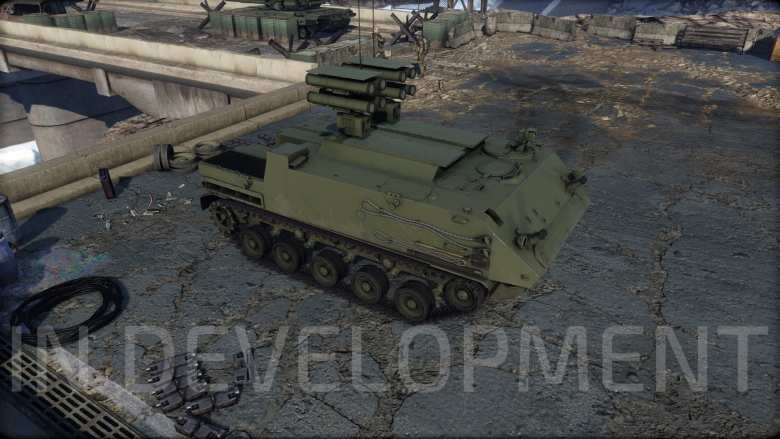 Where the Kornet-EM can act as an extremely fast pseudo-scout of sorts thanks to its blazing speed, the Kornet-D1 will be the ultimate stealthy missile launcher with perhaps the best camouflage factor in the game, surpassing even that of the Shadow. The weapon system will be identical to Kornet-EM, including its limited traverse and the double tap feature, where two missiles can be launched at once (although this feature needs to be unlocked along with an optional module). However, when activating it:

The missiles will be identical in their performance to Kornet-EM. Overall, we are looking at roughly 11500 points of damage per minute without the double launch feature and 10000 with it. The vehicle will carry 48 missiles. 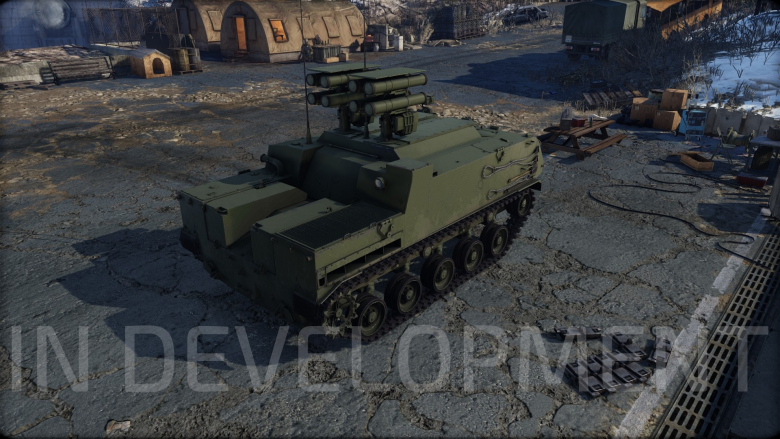 There will, of course, be downsides to compensate having so much firepower. For one, as you have probably expected, the vehicle will have almost no armor to speak of, or any active protective measures for that matter, save for the usual smoke grenades. Secondly, its speed will be considerably inferior to that of the Kornet-EM, even though it will be adequately fast and agile for it class. And, finally, unlike the Kornet-EM, the Kornet-D1 will be practically blind with its viewrange of only 370m. There’s a caveat though – the Kornet-D1 can deploy a Sniper to do its spotting for it.

When you put all this together with the excellent camouflage factor, you’ll have an extremely stealthy and hard-hitting vehicle, which, on the other hand, has to rely on other players or your sniper for spotting and perishes quickly when discovered. Fast dashes won’t generally be possible with this vehicle (unless you use an Active Ability). Instead, you’ll have to stay hidden, strike fast and then carefully make your way to the next hiding spot, like a ninja in the night. 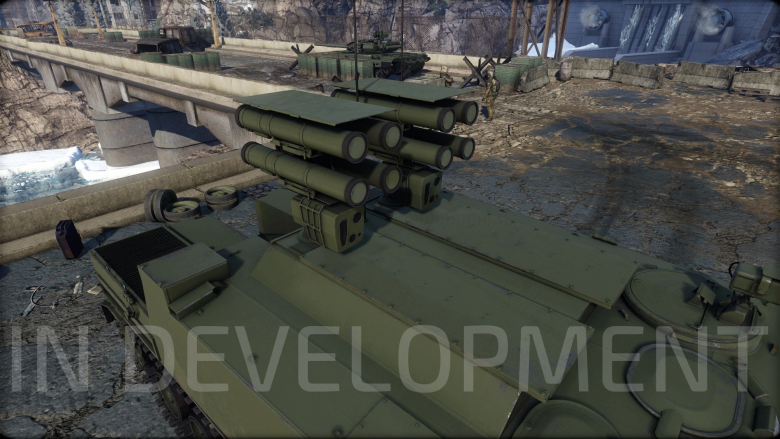 The vehicle will offer some limited performance customization too. Module-wise, you’ll get to choose between the double tap feature and some extra camouflage, and also between lower camouflage penalties for launching your missile (ideal for staying hidden on one spot) and removing your camouflage penalty for moving (for switching positions stealthily). And, last but not least, you’ll have three Active Abilities to choose from: Sniper Mechanized Infantry, Override and Retreat.

We hope that you will enjoy this vehicle as much as we enjoyed making it for you and, as always:

The second major update of the Apocalypse season is now available!

Learn about Update 0.35, another part of the Apocalypse season that is now available in Armored Warfare