The Kampfpanzer 70 is the German sibling of the American MBT-70 program, born from the 1963 cooperation agreement between West Germany and the United States. To this day, it remains a cautionary tale of how not to develop a tank and while it was certainly not the only blunder in American or German armor-designing history, it is one of the best known ones. 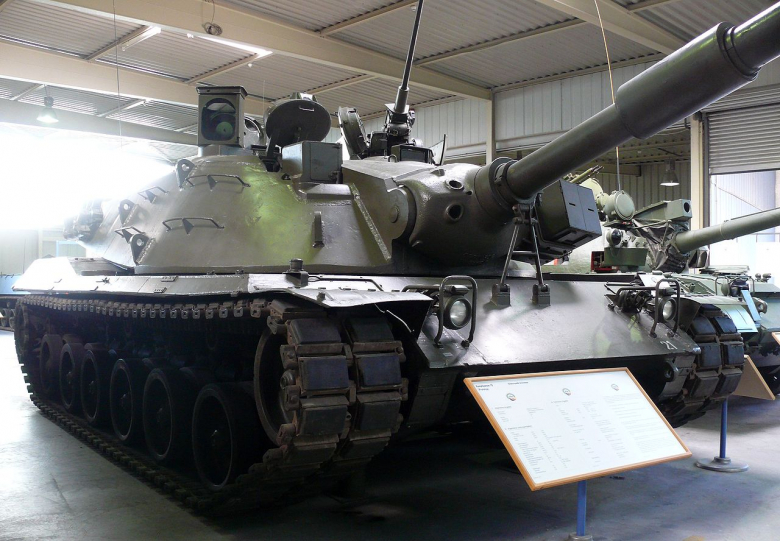 The development of Kampfpanzer 70 started with the need to replace the aging M48 and M60 tanks in both countries. These tanks weren’t bad of course and numerous upgrades were developed for them, resulting in some extreme lifespan extensions, but in the end, even the M60 was still just an interim vehicle that was intended to be replaced. What was needed was something far more advanced and capable of facing the advanced Soviet tanks the analytics feared.

To that end, the United States and West Germany signed a cooperation agreement in August 1963, followed by a December 1963 agreement between the companies that were to make the intent a reality. The joint-developed tank that was the object of this agreement was supposed to be fielded in 1970, resulting in the name of the program – MBT-70 for the American side and Kampfpanzer 70 for the German one.

For the American side, the designated company was General Motors, for the German side it was a company called DEG (Deutsche Enticklungsgesellschaft mbH). DEG was a consortium of several industry companies involved one way or another in tank development. The list included:

And several others. Both DEG and GM then participated in the discussions leading to the finalized requirements for the future MBT.

To understand the difficulties both parties faced and the later cooperation breakdown, one has to understand the conditions under which they worked on the project, because this was the year 1963. The Second World War ended mere 18 years earlier and was still very fresh in the memories of both the Americans and the Germans. The men, who in their 20s liberated Europe, were now in their 40s and the horrors of war with Germany were still relatively fresh in their memory.

Another issue was the language barrier and the measurement system, the bane of many a promising cross-Atlantic project. The Americans insisted on using the Imperial system while the Germans naturally preferred the Metric system. After many arguments, it was agreed upon to use the Metric system for assembly plans, but both sides kept their own partial drawings in their preferred measuring units, which added to the general chaos.

And last but not least, there were the production disagreements. In theory, both sides were supposed to cooperate and pick whichever vehicle component was the best regardless of who produced it, but in reality each side lobbied heavily for the components produced by its companies, resulting in a large number of conflicts. That way, even otherwise banal issues were sometimes escalated all the way to Minister of Defense level, resulting in massive delays.

The situation was generally solved by each side continuing the component development on its own despite the fact that the other side’s component was formally accepted as a “backup” – in reality, however, two different components would be used.

Despite all these issues the cooperative development took off and in 1965, both parties agreed on the basic requirements for the future MBT. These included:

In short, the vehicle was to be as advanced as possible and was to include elements not previously used on German or American tanks.

Some of the requirements were a source of many heated debates. The Germans for example had no real need for air conditioning because the tank was to be used in Europe for the defense of West Germany. On the other hand, the Americans envisioned MBT-70s deployment across the globe, including hot countries. Same went for special cold climate considerations. And of course then there were the weight limits – the tank had to be transportable across the ocean. 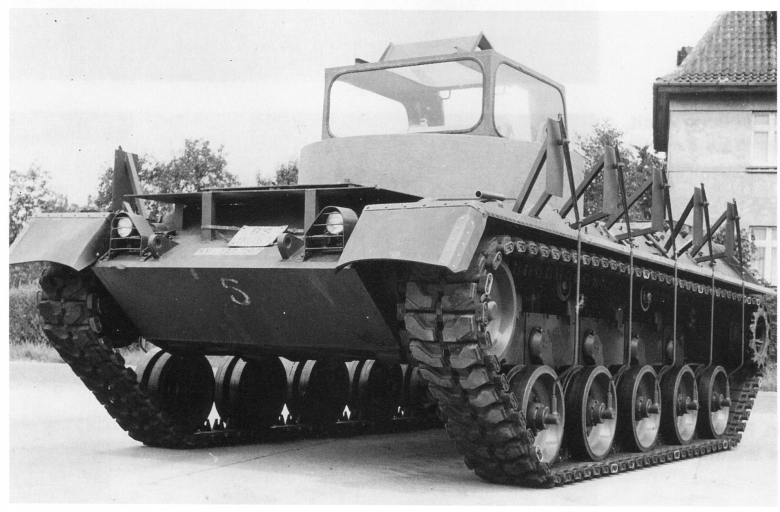 Both sides agreed on the distinct possibility of a nuclear conflict with the Soviet Union – after all, the Cuban Missile Crisis happened only three years earlier – and much thought was given to crew protection, including the installation of NBC protection. In the end, the vehicle received a German ECU (Environmental Control Unit), consisting of an air conditioner, a powerful heater for cold climates and an overpressure unit with filters.

What both sides did not agree upon however was the main weapon.

The Germans wanted high muzzle velocity cannon to kill armored targets with the idea of Soviet divisions pouring out of East Germany on their mind. The Americans on the other hand wanted a 152mm gun-launcher, arguing that this would enhance the crew survivability even further because guided missiles could engage armored targets at maximum firing distances with higher chance of success. The Germans counter-argued that the woodland and urban areas of Germany would negate such an advantage and that standard tank cannon can engage a target faster.

In the end the American opinion won and the 152mm XM150 low pressure gun launcher capable of firing Shillelagh missiles became the weapon of choice. It was basically a longer version of the gun-launcher used by the Sheridan Light Tank. The minimal range of the Shillelagh missile was 650 meters – any closer and the gunner had to use standard rounds, which included HEAT, HE, a flechette “beehive” round, White Phosphorus shells and – unlike the Sheridan – APFSDS rounds.

The Germans worked on a variant armed with a 120mm smoothbore gun, but that was never actually built. And then there was the coaxial 20mm Rheinmetall Rh202 autocannon, intended for soft target use. 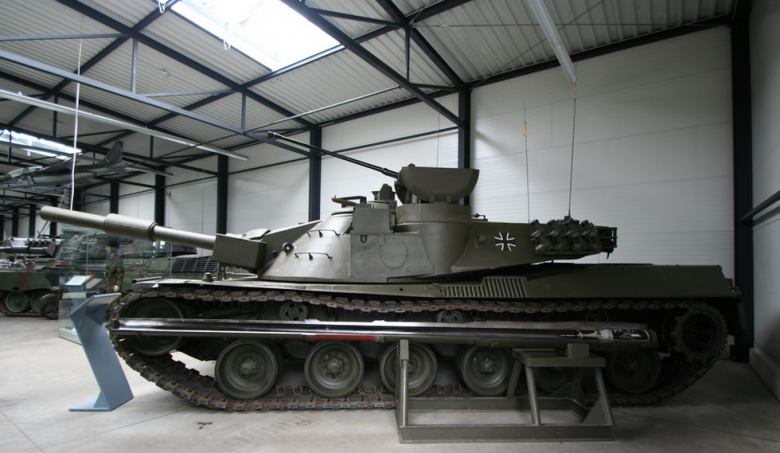 Either way, the XM150 was a massive weapon. Its choice resulted in the decision to install an automatic loader to the turret. To keep the size and – more importantly – weight of the tank manageable, however, some quite unusual decisions had to be developed.

For starters, the autoloader allowed the crew to be reduced to three men. The driver would be normally sitting in the hull part, but in MBT-70, he was moved to the turret with his station position independent on turret traverse. Of course, this had its downsides as well – while the driver could see better from the turret than from the usual frontal hull position, the constant traversing and counter traversing of his position led to disorientation and headaches.

However, this unorthodox solution allowed the crew to sit together, which in turn allowed the designers to put it in a well-protected armored capsule, increasing the survival chances of all three men. It allowed some considerable weight savings as other parts of the vehicle – such as the hull –did not have to be so heavily armored.

The armor consisted of steel layers with cavities (spaced armor) that were to be filled with anti-radiation lining. Some publications state that the armor was composite – it’s not true! The “composite” layer on these schematics is the radiation liner.

And then there was the two-piston hydropneumatic suspension. The earlier variant was American-built, the later variant was German, but both were very complex. The tracks were German (635mm wide by Diehl) and the whole thing was powered by several engines – the Americans used two 1500hp Continental engines while the Germans used an engine by Daimler Benz (MB 873 Ka-500).

All in all, the vehicle was very advanced, but also quite complicated. The first U.S. suspension testbed was completed in June 1966 and the German suspension testbed was ready in September 1966. Both were compared in October 1966, but neither was officially selected. Suspension tests continued until 1969 without a clear result, as both sides insisted on using their own model.

Originally it was decided to produce 8 prototypes per country and the first actual vehicles were ready in July 1967 (American one) and October 1967 (German one). Both were extensively tested in 1968, but as early as in February, it was decided to reduce the number of prototypes from 8 to 6. The building of the second generation prototypes (the six both sides agreed to build) started in 1969, eventually resulting in:

The prototypes were generally plagued with a number of teething issues and the project was facing more and more delays. The prototypes were also heavier than originally intended, but the biggest problem by far was the price. The costs of the entire program skyrocketed to whopping 830 million DM (approximately 544 million USD in 1969), of which the Germans paid roughly 310 million DM. In long term, this was not sustainable.

This led to the cancellation of the German part of the program in late 1969 and the Americans followed in January 1970, ending the joint MBT-70 development for good. The United States continued to develop the concept (resulting in the XM803) but Germany didn’t come out of the whole ordeal empty-handed either. The valuable experience was used in the development of the Leopard 2 Main Battle Tank.

Visually, the German Kampfpanzer 70 is a bit different from the American MBT-70 version, but both vehicles share the basic shapes and are easily mistaken for one another. In Armored Warfare, the Kpz 70 will be a Tier 6 Premium vehicle, comparable to its MBT-70 sibling.