Possibly the most common and prevalent myth concerns the training superiority of the Germans, specifically the Waffen SS units. This myth, based on actual Nazi propaganda, seeped into post-war popular culture and largely remains embedded in it to this day, despite the fact that this Waffen SS reputation is mostly unwarranted. 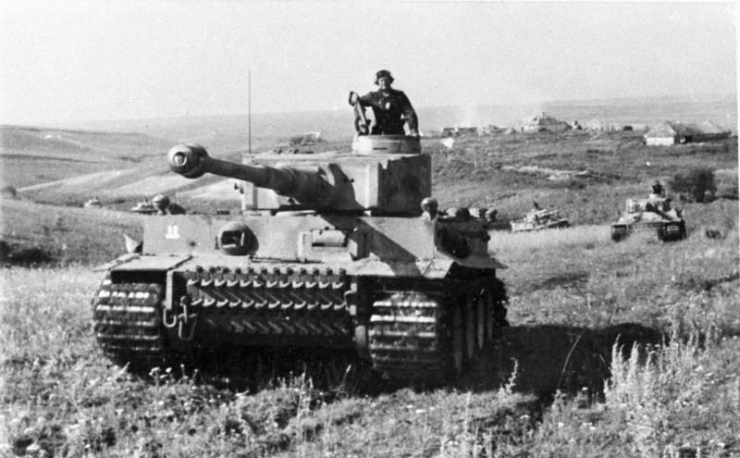 While some specific Waffen SS units could indeed be considered the "elite" of the German military, the same could be said about the Wehrmacht armored divisions. Waffen SS units were as a whole never superior to the Wehrmacht – quite the contrary. Certain units (such as heavy tank units) are on par record-wise with the Wehrmacht, but many Waffen SS units are simply inferior to the properly trained German soldiers. SS troopers were initially chosen by their racial origin and loyalty to the Nazi regime, neither of which implied any combat prowess. The regular Wehrmacht units had to save the SS several times from utter destruction, even during the campaign in France, and, as a general rule, the SS units had higher losses and achieved their objectives less often than the regular army units. The statements above actually only apply to the "best" Waffen SS units – Das Reich, Leibstandarte Adolf Hitler and Totenkopf. Other Waffen SS units were even worse (especially those not consisting of ethnic Germans but of foreign volunteers). In real battle they were generally sub-par to completely useless, had poor morale and were only used to hunt down partisans (for example the 13th Waffen SS Mountain Division "Handschar").

The regular army (Wehrmacht) generally disliked the Waffen SS at best and hated them at worst. Waffen SS units were unreliable and were known to greatly exaggerate their combat results in reports while hoarding much of the best German equipment that would have served better in Wehrmacht hands and the Waffen SS ideology-based units brought overall German performance down. One infamous Waffen SS commander, Michael Wittman, was disliked in particular by Wehrmacht officers for being brash, not following orders and being a glory-hound. He was valuable as a propaganda tool but, from a military point of view, his worth was debatable because any military relies on the chain of command and cooperation to succeed and not individual actions. His career was, however, protected by Heinrich Himmler and as such he was untouchable.

One more thing should be added to complete the picture: during the late years of the war, the training of the tank crews declined rapidly due to a lack of fuel, manpower and – most importantly – time. German tankers at the end of the war quite literally had one or two hours of training and sometimes not even that. The fact that such forces were, even in 1945, able to hold off the Allied advance in some places underlines their courage – the fighting during the last days of the war was anything but easy for the Allies.

From the first year of the war to the very end, the German military certainly did not lack proper military equipment, but it often receives undeserved credit for being technologically superior to everyone else when it comes to their armored forces. These misconceptions are likely to have their origin in the fantastic (and unrealistic) late wartime projects as well as the reputation of the Tiger and Panther tanks.

Early in the war (1939-1940), German armor was in fact anything but superior. The Panzer I tankette and Panzer II light tank were inferior to pretty much any French, Czechoslovak, British or Polish armor in terms of protection and firepower and without the stocks captured from the Czechoslovak army, the attack on Poland would have been much more difficult (if not impossible). During the 1940 campaign in France, modern French armor was superior to that of the Germans as well as to many of the captured Czechoslovak light tanks, but the French suffered from many issues that plagued their military at the time: a large part of their equipment was obsolete, the army was caught in the middle of re-armament along with the general chaos and shock of the situation. The Panzer III and Panzer IV were available only in limited numbers before 1941 and even during the initial days of Operation Barbarossa, Germany was fielding a large number of captured vehicles (most notably the Panzer 38(t)). 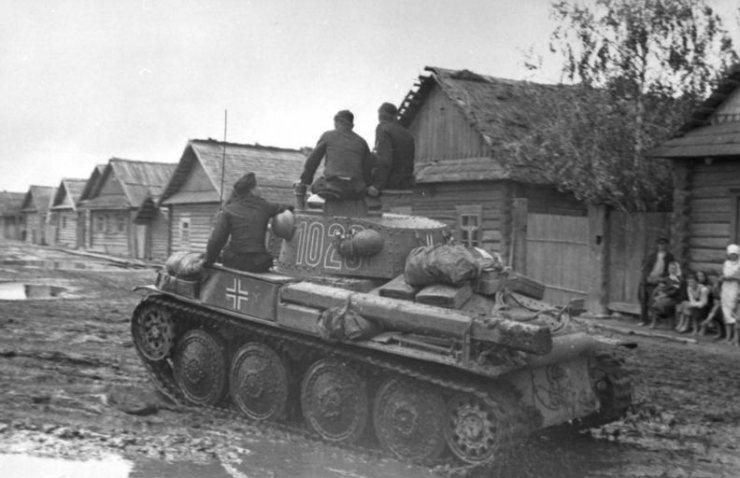 Panzer III, IV and StuG III vehicles were the mainstay of the German army throughout the entire war. They were solid tanks – the Panzer IV, especially, was well-made and survived as the main German tank right until the end. They were, however, not generally superior to their contemporaries – we have to consider the various armament versions and what they were fighting against. The armament of these vehicles only increased gradually and sometimes it was delayed intentionally so as not to complicate production. Such was the case of the 50mm German tank gun – the earlier variant (L/42) of the Panzer III was scheduled to be replaced by the longer one (L/60), but the argument was – apart from the usual changes in production – that there really is no need because the L/42 version is sufficient to fight the Soviet vehicles the Germans are encountering and that longer barrel can be unpractical in a city environment. The earlier variants of the Panzer III and IV tank were vulnerable to practically all anti-tank weaponry (including anti-tank rifles) and only later was their armor protection increased to counter at least the most widespread threats.

Possibly the best known German tanks were the Tigers and the Panthers. Of the two, the Panther was the more practical, but it is primarily the Tiger that most people are interested in due to its (partially undeserved) reputation. When the Panzerkampfwagen VI "Tiger" was fielded the first time, it was a real monster. It weighed 55 tons, was armed by the dreaded 88mm gun and could withstand the fire of pretty much anything. On the other hand, it was slow, not very reliable and hideously expensive. The Soviets found ways to fight the Tigers rather quickly but their dreaded reputation was cemented by the extreme kill scores of some of its crews. From 1943, the value of the Tiger decreased with the appearance of more potent guns on the battlefield, but its price remained the same, a price wartime Germany could ill-afford. In a way, the Panther was in the same situation. On paper, it was an excellent tank and its long 75mm gun was powerful enough to knock out pretty much anything. Its side armor was, however, still vulnerable to AT rifles (leading to the development of Panther II and "Schürzen" side armor) and it could be knocked out from the frontal angle as well, in some cases even by Soviet 45mm guns. The shock that the Panther caused on the western front was not really caused by the quality of the tank itself but by the fact that it started replacing the Panzer IV as the principal German battle tank (unlike the Tiger, which – just like its successor, the Tiger II – remained as a specialized heavy tank unit weapon). The Panther had another serious flaw too apart from its price – it was unreliable (the best known example were the final drives that lasted 150 km), but despite these issues it was certainly one of the best tanks the Germans ever fielded – after the war the heavy and superheavy monsters died out but the Panther was fielded for example by France for a while and when – a decade after the war – the West German army started looking for new tanks, one of the initial ideas was to actually re-start a modernized Panther production. It's worth noting that late in the war the Germans decided to standardize their entire design production into three chassis models: light (38(t) chassis), medium (Panther chassis) and heavy (Tiger II chassis, simplified for mass production). 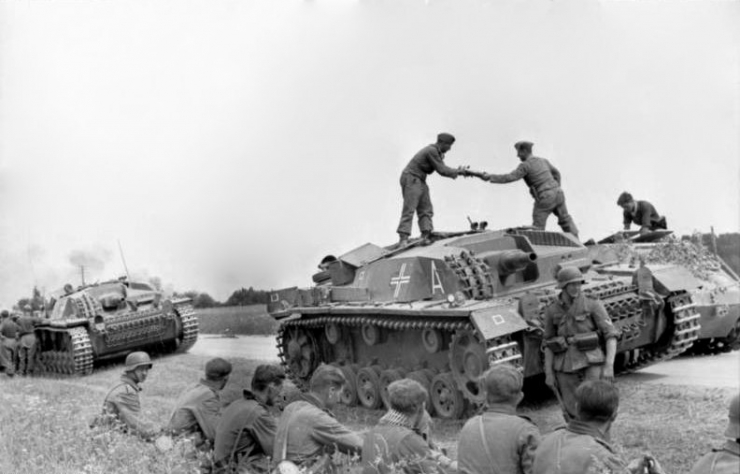 Was the Panther the best German armored vehicle of the war? No. That title probably belongs to a less obvious candidate – the StuG III. Built upon the Panzer III chassis, the StuG III was not expensive, had excellent results and remained effective right until the end of the war. Building these vehicles made much more sense during the war than building over-armored heavy tanks, especially in the price per enemy kill perspective.

Contrary to popular belief, Tigers were (especially late in the war) very rare. Many older wartime accounts mention "Tigers", "Panthers" and "Ferdinands" destroyed in large numbers but most of these tank kills were other tank models and not the dreaded "big cats" – for an average Allied soldier, however, every tank was a "Tiger", especially in the east.

One issue of interest is German steel. In the past, various popular sources have attributed nearly mythical qualities to it and the "Kruppstahl" was largely a synonym for "durable". Recent Russian sources have claimed exactly the opposite – that it was brittle and poor, especially late in the war. The truth, as usual, lies somewhere in the middle. The Krupp steel was certainly hard rather than soft but that is not inherently a good thing. Softer steel has some advantages over very hard steel (which is usually brittle), but it is possible that the (false) "harder means better" notion spawned the German steel reputation. On the other hand, the claim that German steel quality decreased later in the war is false – according to H.L.Doyle the Germans compensated the lack of certain elements of the steel creation process by modifying the formula. 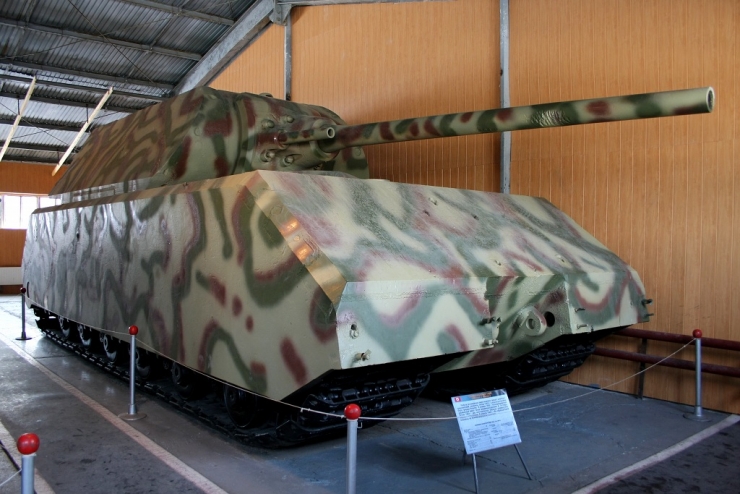 The last thing we want to address are Germany's fantastic late wartime projects, the best known of which is the Maus. While these (especially aviation and rocket advancements) generally do contribute to the "Nazi super-science" perception of German technology, many of these were simply misinterpreted or completely useless like the Maus (it was too heavy to be practical, too expensive, too slow, too fuel hungry and its armor wouldn't have protected it anyway against modern Allied weapons and attack aircraft). The famous E-series was generally nothing but production simplifications, the E 75 was a simplified Tiger II, for example, and was by no means the "super tank" some claim it was. There was actually even a proposal for E 75 suspension that used Praga-style suspension, a reliable element but technologically a throwback.

The German army was as capable as any other in World War Two. It had its advantages and its flaws, its terrible losses and its victories. Some of the achievements of the German wartime industry are used to this day and some vehicle classes used by Germany disappeared right after the war. One thing is for sure – the Germans heavily influenced the way we look at tanks today and that is their undeniable contribution to armored warfare.