One of the most-produced Soviet armored vehicles in history is the T-62 medium tank that was a result of a program to improve T-55 medium tank performance. That much is well-known – but how did it end up with a 115mm smoothbore gun? The bore is unusual to say the least and the Soviet Union didn't have any mass-produced weapons of such caliber before the T-62. So how did that happen and why? 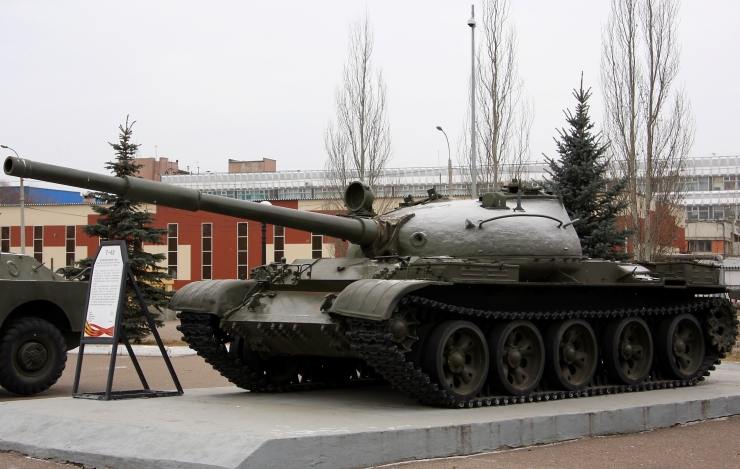 To discover the answer, we have to go back to the fifties. By then the Soviets had realized that the 100mm D-10T T-54/55 gun was becoming obsolete. It was originally from 1944 and while it was powerful for its time, a decade later the technology had moved on.

In 1951, the Kharkov No.75 Design Bureau (led by A.Morozov, one of the T-34, T-44 and T-54 designers) was tasked with building an entirely new tank for the Soviets. In order to increase the firepower, the OKB-9 design bureau under F.Petrov developed a new 100mm rifled gun for it, the D-54. The designers anticipated the use of a stabilizer with this gun and its ballistic properties were supposed to be excellent as well (1015m/s). The development of this gun turned out to be the chokepoint of the entire new tank project. In 1953 Morozov presented the first proposal for the new tank that was to be equipped with this gun (designated Object 430). This development eventually led to the T-64 but other options were also sought. 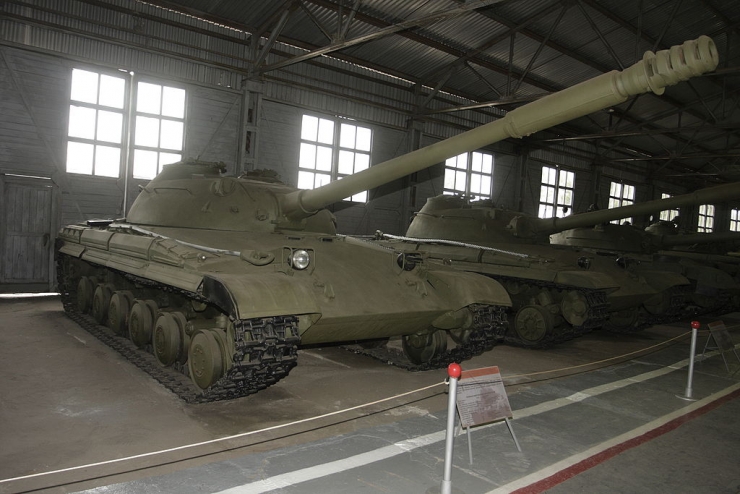 An alternative program came a year later from Nizhny Tagil, where the Uralvagonzavod (UVZ) plant was working (under the leadership of Leonid Kartsev) on a T-54 modernization program. By then it was clear that the new tank from Kharkov would not replace all the T-54s in service as it was just too expensive and it would take too long. Apart from that there was the question of the "allies" (Soviet satellite countries) that were eventually armed with thousands of T-54s and all of them would at some point require extensive modernization.

One of the first attempts was to equip a T-54M tank with a D-54 gun (Object 139) and an experimental two-axis stabilizer called Raduga (rainbow). The point of this program was the relatively easy increase of firepower for this heavily produced tank. The vehicle with the Raduga stabilizer was tested in October 1955, but the stabilizer was very unreliable and never went to production. After the Raduga failure, stabilizer development continued with another project called Molniya (lightning) that ended with better results and three prototypes were ready in late 1955. A D-54 gun equipped with this stabilizer was designated D-54TS.

Meanwhile, Kartsev proposed in 1954 that another tank be armed with the D-54 gun – the Object 140. He did that at great personal risk as there was actually no tank branch or party leadership demand for such a vehicle and such initiative was not always rewarded. Nevertheless, in 1957 three Object 140 prototypes were ready along with one Object 430 prototype. Both were armed with D-54TS guns that – after some more bad results from the Molniya program – were equipped with yet another stabilization system called Metel (blizzard). The shape of the Object 140 somewhat resemblied the T-54 tank but had a longer hull and six smaller roadwheels. Frontal armor was 100mm thick and the frontal turret cast plate was 240mm thick. The vehicle was powered by a new engine as well. Both the Object 430 and Object 140 underwent series of trials, including comparison runs at Kubinka proving grounds, but the results were inconclusive: neither vehicle showed complete firepower superiority over the T-54 and both were marked as unsuitable for mass production by the trial committee. Instead the Soviets opted to upgrade the T-54 tank, resulting in the T-55. That however did not deter the designers from coming up with a further improvement proposal.

When mentioning the "tank shock" scenarios, many people imagine (western) Allies being surprised by some of the first German and later Soviet technologies such as the IS-3. These "shocks" (and the appearance of the murderous-looking sleek Soviet heavy war machine was a shock to the west) usually initiated episodes of frantic development (that – for Britain – for example ended with the Conqueror that was built to knock out Soviet heavies at extreme distances). But these situations were not exclusive to the West. The Soviets had their own "shock" with the appearance of the British Royal Ordnance 105mm L7 rifled gun.

Soviet espionage reports about the L7 described (and rightfully so) a weapon of extraordinary quality, capable of tearing through contemporary Russian armor with ease. The fact the British had such a weapon was not perceived as critical by the Soviets (after all, the L7-equipped British tanks were stationed around the Rhine river) but the fact the Americans started license-producing it after 1960 under the M68 designation sent counter-development into overdrive.

It was Kartsev's team that stepped up in the end. Their new proposal openly used the T-55 elements – it was however longer and wider and the turret ring diameter was increased from 1825 to 2245mm. The proposal had the Object 140 turret and the D-54TS gun. At one point the developers proposed two-piece ammunition as loading the long rounds in the cramped turret was still quite difficult. The new vehicle was also overpressured and thus resistant to combat gasses and radioactive dust. This new tank received the designation Object 165.

The factory and military trials of this vehicle went relatively well as the tank was mostly using solutions and elements that were mass-produced already. The only problems came with the D-54TS muzzle brake. During the firing trials in February 1960 it was discovered that the snow sent flying by the gun muzzle blast accumulated and froze on the driver's periscope, preventing him from driving buttoned up. In summer the flying dust and mud had the same effect. This issue was corrected by adjusting the muzzle brake shape. In the end the gun received the factory designation of U-8TS and GRAU designation 2A24. This vehicle was also equipped with a Meteor stabilizer. It entered Soviet service on 12.8.1961 under the designation of T-62A.

In order to find out how the 115mm gun came to be and how it appeared on the T-62, we have to go back yet again to the Fall of 1958 when the OKB-9 design bureau under F.Petrov designed the 100mm T-12 Rapira anti-tank gun. It was a powerful weapon, capable of firing effective HEAT ammunition. Unfortunately, the gun was shown to Nikita Khruschev who immediately became very interested in having tanks equipped with exactly this weapon. What was even worse, someone actually told him it was possible to do on short notice and Khruschev became ecstatic – witnesses heard him say:

Great, let's build 200 tanks with this gun next year!

That however proved to be much more difficult than it would at first seem.

When Kartsev was invited to Moscow and told about the task to put the T-12 gun into a tank, he replied straight away that it was impossible. After a whole day of “friendly, but firm" pressure, he, in desperation, asked for a meeting with Khruschev with the intention of explaining to him that the laws of physics could not be bent even for the First Secretary of the Central Committee of the Communist Party of the Soviet Union.

The reason why the task was practically impossible was the size of the ammunition – the gun had a 1,2m long round that could not be loaded in the cramped interior of the tank. In the end however the party members insisted that a promise given to the First Secretary – however premature – is a promise that cannot be broken and so the work on modifying the gun for tank use began. The ammo length was the main limiting factor as Kartsev predicted and had to be shortened to 1.1 meters (and even that was almost too long). In the end Kartsev proposed an emergency solution: to keep the firepower, the ammunition was to be made shorter but with increased diameter. This could be achieved by removing the gun rifling and turning it into a smoothbore. This task was done by the OKB-9 design bureau. There were concerns about the potential reduced accuracy but in the end they turned out to be false. This modified smoothbore gun was implemented into one Object 165 medium tank (the future T-62A) and the vehicle was re-designated to Object 166. Several more prototypes were built in 1966. 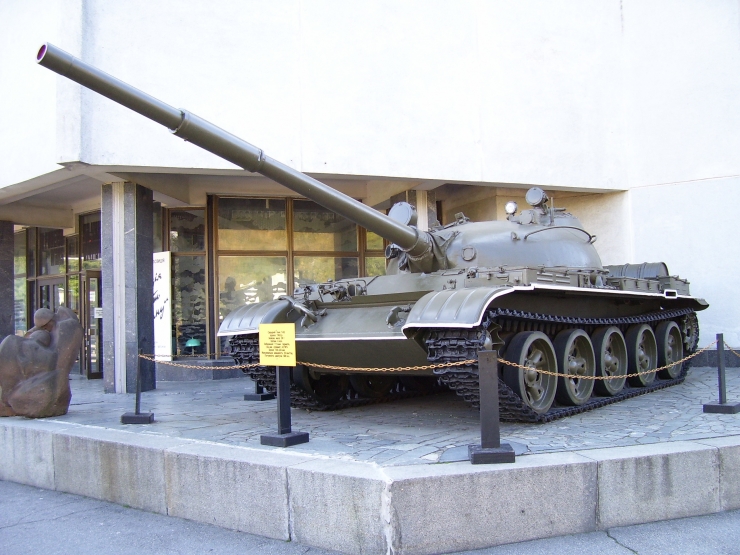 This modification of the D-54TS gun caused the caliber increase from 100mm to 115mm. The ejector was also moved, the muzzle brake was removed and it was under these peculiar circumstances that the U-5TS Molot (hammer) 115mm smoothbore gun was developed. Firing trials showed that while the gun was somewhat less accurate than the older D-10TS, it had twice the effective range, excellent muzzle velocity (1600 m/s with subcaliber ammunition) and penetration capability. The gun was implemented into a new cast turret that turned out to be more durable that of the T-55. This new turret was then installed on the Object 165 hull in the summer of 1961. Thus modified the vehicle was accepted in service as the T-62 on the same day as the T-62A (12.8.1961).

As it happened, the commander of the Soviet land forces at the time was Marshal Vasily Ivanovich Chuikov. Chuikov was a war veteran of the battle of Stalingrad and was known for his theatrics and his vulgar outbursts. When he heard in 1960 abut the danger the 105mm L7 represented, he immediately contacted the commander of the tank forces, Marshal Poluboryarov, and other GABTU officials. They talked about the Object 430 and the subordinates commented on development issues said that the Object 165 D-54TS gun could not match the L7 in power. To save face they also mentioned the fact that the Nizhny Tagil bureau was developing a 115mm smoothbore, but they were unable to show it to Marshal Chuikov because the tank that carried it had just broken its suspension. Chuikov flew into a fit of rage and started yelling at them not to tell him any nonsense about a broken suspension, according to witnesses his words were:

I want that gun even if you have to bring it to me tied to the back of a pig!

After such "persuasion" a GABTU delegation was sent to Nizhny Tagil, asking the director Okunyev how fast the Object 166 could be mass-produced. Okunyev replied that there were no such plans as another – more modern – vehicle designated Object 167 was already in development.

As a result of this visit, representatives of the entire Soviet tank industry were called to Moscow and after a day of "debating", Okunyev was persuaded to start the Object 166 production in July 1962. The T-62A was to be produced alongside it because the gun was supposed to be the main armament of a new tank from Kharkov and its development was "too expensive not to be used in some way" – but this attempt to save the gun also failed and in the end the T-62A was not mass-produced in any large quantities.

A series of delays for various reasons followed, but the vehicle was finally shown to the public during the 7th of November military parade when 20 vehicles of the 4th Guards division passed through Red Square. The first operational use of the T-62 was during the 1968 occupation of Czechoslovakia.

And so the T-62 was born and became one of the most famous and widely used Soviet tanks. As an export vehicle it was largely successful. Its combat record, however, is tarnished by misuse and poor training of third world troops against superior armies such as the Israeli army. Nevertheless, the T-62 had a solid design and was a worthy replacement of the T-55.