With the German occupation of Czechoslovakia, both former rivals – Škoda and ČKD – found themselves working for the German industry. Most of the promising pre-war projects were cancelled and the production focused on German designs. The former LT Vz.38 was produced further for the purposes of the Wehrmacht and between 1939 and 1941 it served as one of the main German tanks. Despite the armor upgrades the light tank was becoming increasingly obsolete. An attempt to create a dedicated scout tank (known as Panzer 38 (t) n.A. – or TNH n.A.) failed as well – mostly due to political reasons as the tank proved during trials to be superior to the Luchs. 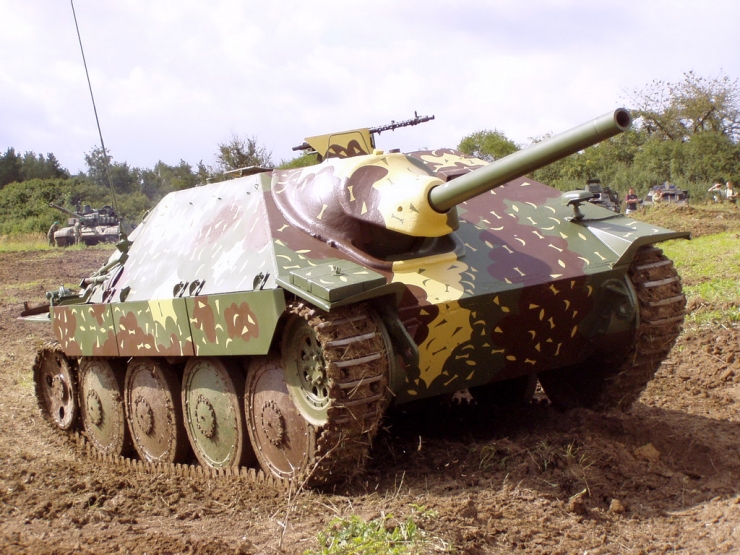 That did not however stop the attempts to use the Praga suspension for different purposes. The best-known three were the Grille self-propelled gun, the Marder III tank destroyer and the Jagdpanzer 38 (t), also (incorrectly) known as the Hetzer (the name “Hetzer” is not historically correct – it belonged to one of the light E-series tank destroyers and got mixed up with the 38 (t) after the war). The Praga suspension (designed by Alexej Surin) was an excellent platform – in fact it was so good that the Germans (at the end of the war) chose it as one of the three unified platforms all the German vehicles were to use (the other two being the Panther and Tiger II chassis). Other than that, there were numerous Waffenträger projects built upon the Praga suspension as well as – what is perhaps one of the most interesting and promising projects – a fully tracked APC known as the “Kätzchen” (“kitten”). Sadly the project was discontinued after the war when the Czechoslovak army chose the halftracks for the APC role.

Škoda had a similar fate. Under the direction of Wilhelm Voss it produced several interesting projects for Germany (upgrades to the LT Vz.35 known as T-12, T-13M and the T-14 proposal, an advanced T-15 light tank, the T-24 and T-25 medium tanks and several tank destroyer projects including Voss I and Voss II) but few ever made it past the drawing board and the company focused mostly on producing parts of German vehicles. Beyond that, other companies in former Czechoslovakia were building vehicles for Germany as well, for example Tiger II tanks were assembled in Hradec Králové (numerous unfinished hulls were captured there by the Red Army).

With the defeat of Germany, Škoda and ČKD both got liberated by the Allies and much of the former German equipment was transported to Russia and the USA for “evaluation” as examples of captured materiel (that’s how the experimental Škoda 50mm automatic gun or the 66mm AT gun made it to Aberdeen). In any case, despite the heavy and mostly pointless bombardment of the western air forces during the last days of the war, the Czechoslovak plants were – when the war ended – nowhere near as devastated as the German ones, which allowed the Czechoslovak industry to recover rather quickly.

This setup was a logistics nightmare. Very early on there was no unification. Special army units scoured the land in the months that followed the German surrender, they marked the German army vehicles (even wrecks) for assembly and the vehicles were then transported to various centers. Some were scrapped outright, some were repaired and pushed into Czechoslovak service (for example Panzer IV’s were designated T-40/75N, the Panthers were T-42/75N). German heavy tanks were not used at all (a few Tigers and Tiger II’s were kept for testing). This mess was generally sorted out only in early 50’s when most of the captured or foreign (non-Russian) vehicles were replaced by the Soviet-made (and later license-produced) T-34’s and the German tanks were either mothballed, relegated to training roles (some Panzer IV’s were used for training even in early 70’s) or sold off: a large number of Czechoslovak-refitted Panzer IV’s and StuG’s fought on Syrian side during the 1960’s conflicts with Israel, some StuG’s went to Spain as well. 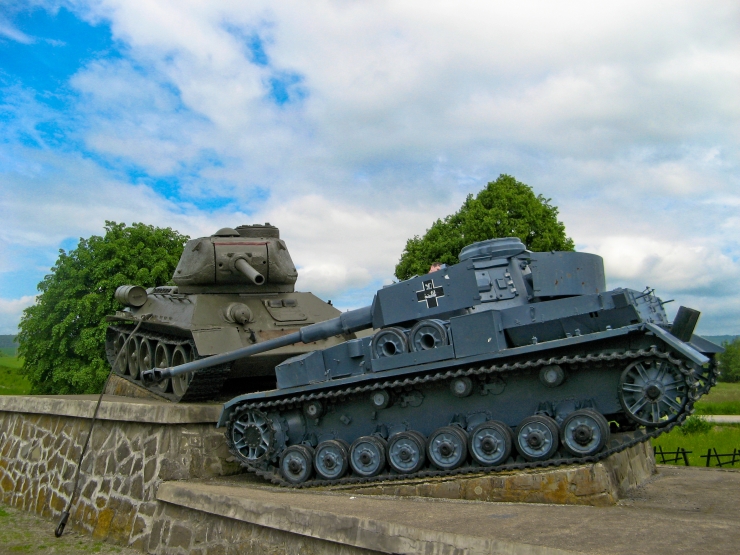 At the same time, both Škoda and Praga started (at the request of Czechoslovak military) to work on a new generation of Czechoslovak light and medium tanks. Praga’s light tank project eventually led to the ultimate evolution of the TNH design, the TNH 57/900. Although it was a light tank, its firepower rivaled that of the T-34. The army however was not interested and no foreign customers were found and so the project was cancelled. Škoda’s research into light tanks (the T-16 and T-17) ended the same way. The medium tank program, called “Tank všeobecného použití” (“Tank for general use”) was more successful, the development continued until the early 50’s and resulted in series of very interesting proposals, the latest of which were roughly on par with early T-54 models. It too however was cancelled as a result of the political pressure to adopt Soviet vehicles. This program included self-propelled guns as well. No prototypes were however built and the era of completely independent Czechoslovak development ended with it. From 1948 onwards, both Škoda and Praga (formerly private companies) were nationalized and fully under state control.

Under the Soviet rule

The communist coup d’état of 1948 marked the end of Czechoslovak independence for next four decades. The Russian influence however did not bring the end to the Czechoslovak arms industry – quite the contrary. Czechoslovakia became in a way one of the armories of the Warsaw pacts, eventually producing thousands of tanks for its own and foreign use.

The first license-produced vehicle was the T-34 medium tank (the 85mm version). A slightly different variant from the Soviet original was produced in Czechoslovakia (not as different as the Polish T-34-85M2 but it had some improvements) from 1951 to 1956 with around 3000 pieces of all variants built, including the VT-34 ARV, MT-34 bridgelayer and JT-34 armored crane. Many of those (roughly 1300) were exported to Egypt, Syria, Romania and Bulgaria. Most of the production took place in Slovakia, where it was moved from the Czech part of the republic for strategic reasons (perceived risks of western bombardment).

Other armored vehicles were produced in early post-war Czechoslovakia as well, including the Jagdpanzer 38 (t) – for Czechoslovak purposes it was called ST-I, the export variant for Switzerland was called G-13 – and the infamous OT-810 halftrack based on the German HKL6p design, called “Hitlerova pomsta” (“Hitler’s revenge”) by the troops for its “qualities”. 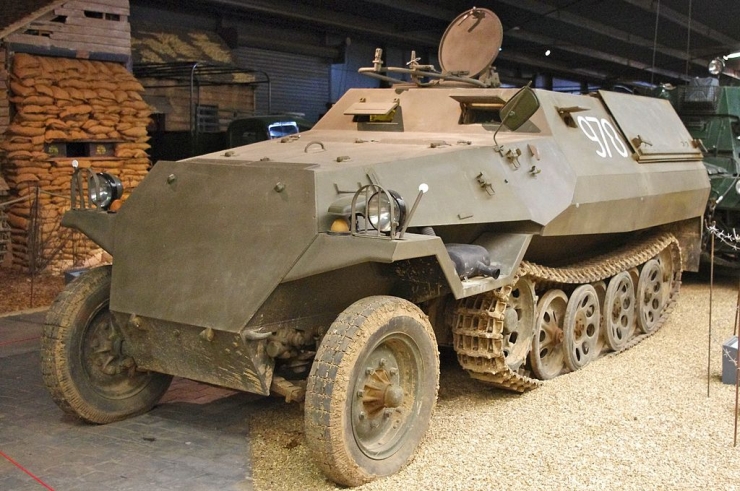 The Czechoslovak arms industry grew fast in the 50’s and beyond. The T-54 and T-55 medium tank production license was acquired from the Soviet in 1956-1957 and multiple variants of this vehicle were produced from 1957 until 1990. All of the variants were modified (from very slight changes to ease the production to major overhauls) and some were widely exported. It is unfortunately beyond the scope of this article to describe them all – even the nomenclature itself is a nightmare (the Soviet bloc for example had at one point three tanks called T-54AM: one was Czechoslovak, one was Polish and one Soviet – all three were different from each other). There are two notable versions:

T-54AR (“Řeka”) was a T-54A modified (sealed) for deep wading using a special kit. Elements of this modification were used for other Czechoslovak T-54/55 variants as well. T-55AM1/AM2 was modified T-55 from mid-80’s. The main improvement was the new indigenous “Kladivo” (“Hammer”) fire control system that increased the accuracy of the vehicle 6.4 times. The AM2 was modified even more extensively, for example by added applique spaced armor to the turret (increasing the turret protection to 250mm) as well as fielding other notable upgrades. 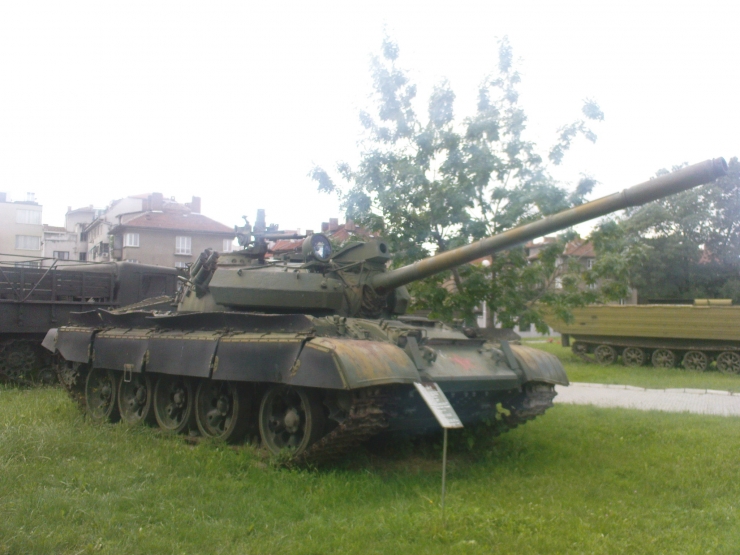 The T-54/55 tanks remained in Czechoslovak service from the late 50’s up until 2000 or so, when they were pulled back from service and (mostly) sold abroad to foreign customers. It’s difficult to actually count how many were made in Czechoslovakia through the years of production (some vehicles registered as “newly made” were in fact older tank overhauls) but the total estimate lies between 3000 and 4000 vehicles of 15 T-54/55 variants. In 1977, it was decided that Czechoslovakia would produce the T-72 tanks as well under license. The initial batch was produced in 1981 in ZTS Martin (Slovakia) with some parts being sub-delivered by Poland (engines, transmissions) and GDR (suspension parts, tracks). Between 1981 and 1985, 556 basic T-72 tanks (“Ural”) were produced and a part was exported to East Germany. In 1985, the production was replaced by the T-72M tank (251 produced between 1985-1986). That model in turn was replaced in 1986 by the T-72M1. Produced between 1986 and 1993, the T-72M1 was the last truly Czechoslovak- produced tank (1010 were made). The split of the country into Czech Republic and Slovak Republic also meant each military went their separate way.

These tanks were by no means the only armored vehicles built (or even designed) in Czechoslovakia after the war – the most notable other vehicles would be the OT-62 TOPAS APC, BVP-1 and BVP-2 (license-produced BMP-1 and BMP-2), the OT-64 wheeled APC and numerous other vehicles.

After the split of Czechoslovakia, the armor development continued. The Slovaks came up with several interesting T-72 variants for example:

T-72M1-A was an upgrade to the T-72M1 from 1997 by adding a more powerful Polish S12U engine and DYNAS ERA system. The fire control system was improved as well (ballistic computer, improved sights and improved EFCS-3-72A fire control system by Slovenian Fotona). A prototype was built but this vehicle however was not accepted in service and was rebuilt to something else soon afterwards.

T-72M2 “Moderna” was another example of Slovak engineering by ZTS Martin. It was a project (more than one version existed) to deeply modernize the T-72M1 by adding not only the Dynas ERA, new (Polish) S12U engine, improved fire control system and (in the later variant) a new version of the 125mm 2A46 gun (2A46MS) but also its signature set of two autocannons on the sides of the turret (later changed to one 30mm cannon). This tank too unfortunately ended in the prototype stage.

Just like the Slovaks, the Czechs too looked to replace the aging T-72M and T-72M1 tanks. VOP 025 Nový Jičín came up with two major overhauls of the T-72: the T-72M3CZ and the T-72M4CZ. In its last version the T-72M4CZ is considered to be the 3,5th generation main battle tank and is currently the principal tank of the Czech army. A prototype was built in 1997 and 27 were made between 2003 and 2005 (they all are currently serving with the 73rd Tank Battalion at Přáslavice, the only remaining active Czech tank unit.

The T-72M4CZ is based on an extensively modified T-72M/T-72M1 hull with added DYNA-72 ERA set. Its frontal protection is 1100mm versus CE rounds (1200 on the front of the turret) and 520mm versus kinetic rounds. The 48 ton vehicle is powered by the 1000hp Perkins CV-12-1000 TCA Condor engine (along with the American XTG transmission). Its gun (2A46M) has a new thermal shroud and can fire a Czech-developed Synthesia 125/EPpSv-97 subcaliber round capable of penetrating 500-560mm (sources differ) of effective armor at 2000 meters. Along with the Polish PT-91, it is possibly the ultimate non-Russian T-72 variant. Unlike the PT-91 however it was never exported. 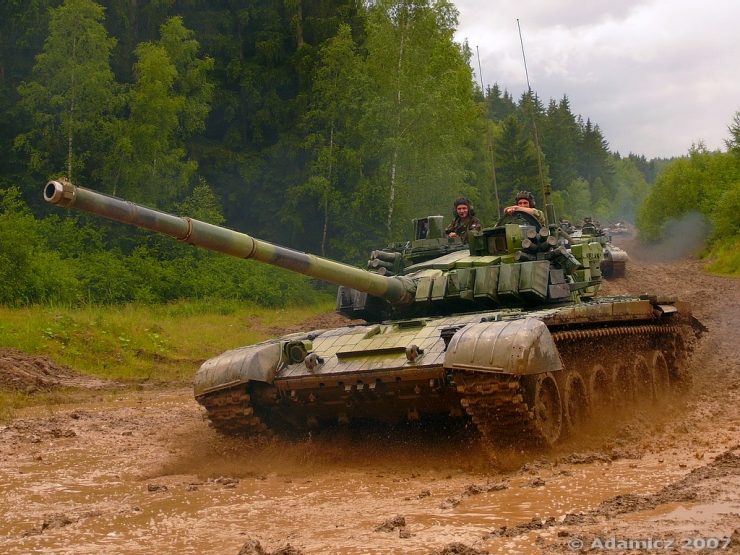 With the current world situation, replacing the aging T-72 tanks is considered but it is practically certain that the Czech’s army next main battle tank will be of western origin (possibly the Leopard 2). The Czech IFV situation was “solved” by purchasing the Steyr Pandur II wheeled vehicles. One thing is however almost certain: regardless of its replacement the T-72M4CZ is likely to be the last main battle tank ever developed by Czech Republic.