The time has come – the Warlords of the Wasteland campaign is here and now it’s your turn to prove that you are the ultimate warlord out there by mastering all the main modes of Armored Warfare.

Between December 14, 2018, and April 11, 2019, you will have the opportunity to participate in the greatest Armored Warfare campaign to date and win exclusive prizes, including the coveted Altay Tier 10 Premium Main Battle Tank and Commander Alisa Korhonen with her unique Mysterious Stranger ability!

In order to join the Battle Path campaign, please enter the game and click on the Warlords of the Wasteland icon on the upper bar.

From there, you can simply purchase the Battle Path access (either for currency or for Gold).

Important: starting early pays off – today and today only, the Battle Path access will be available with 10% discount!

The following options are available:

Additionally, for the players who want to start with an extra boost, we have the following bundle available:

These issues will be addressed in the near future.

Simply put, you earn Battle Coins by completing missions and then spend them to raise your Battle Path level while earning Wasteland Loot Crates, camouflages, player avatar, decals and other goodies, including an exclusive reward tank with Premium status, the Tier 10 Altay. You can also get other Premium vehicles as well as two Altay skins.

There are 100 levels in total. For reaching Level 50, you will an exclusive reward tank with Premium status, the Tier 10 Altay along with a “Bronze” skin for it. For reaching Level 100, you will receive another, “Gold” skin for the Altay. Along with these prizes, various other rewards await you for every level you reach. Their list can be found on the Battle Path progress bar in the game. 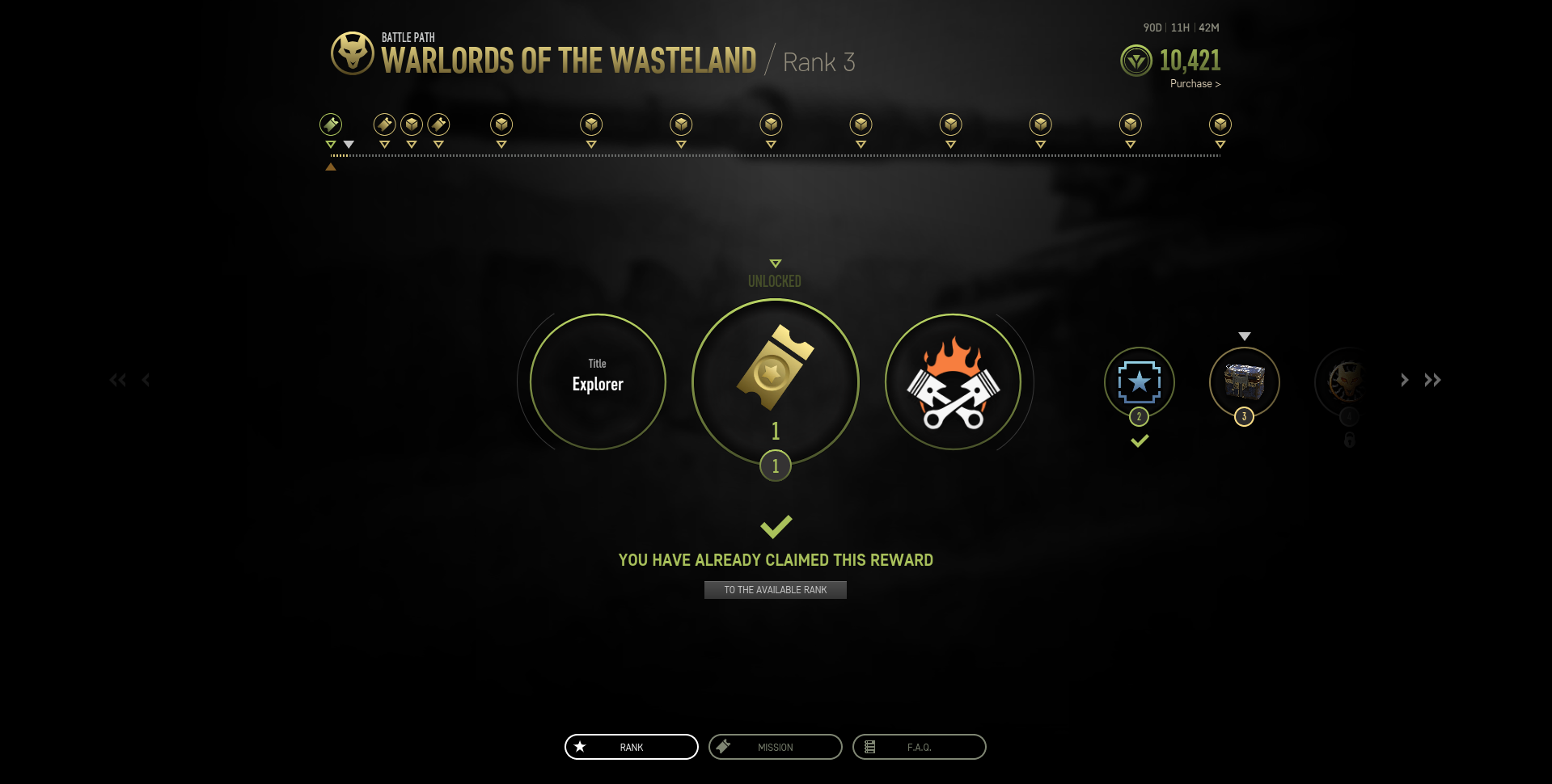 In order to start a mission chain, you need a Token. You will receive a free Token on Level 1, 7 and 13 – you decide which chain you wish to unlock and when. In order to unlock the access to the fourth chain (the “Dire Wolf” missions), you need to complete all the three previous chains first.

Regarding the last point, for each minute you spend alive in battle (with the exclusion of downtime such as waiting for a respawn), you will receive 1 to 3 Battle Coins. Furthermore, winning increases this income by 25 percent in PvE (including Special Operations) and by 50 percent in PvP and GLOPS.

The Battle Path missions will be available between December 14, 2018, and March 14, 2019. The remaining time can be seen in the Battle Path window in the game.

What unique prizes can I look forward to for completing the Battle Path missions?

Apart from the Altay, the unique prizes include:

We have, of course, many other prizes for you as well. 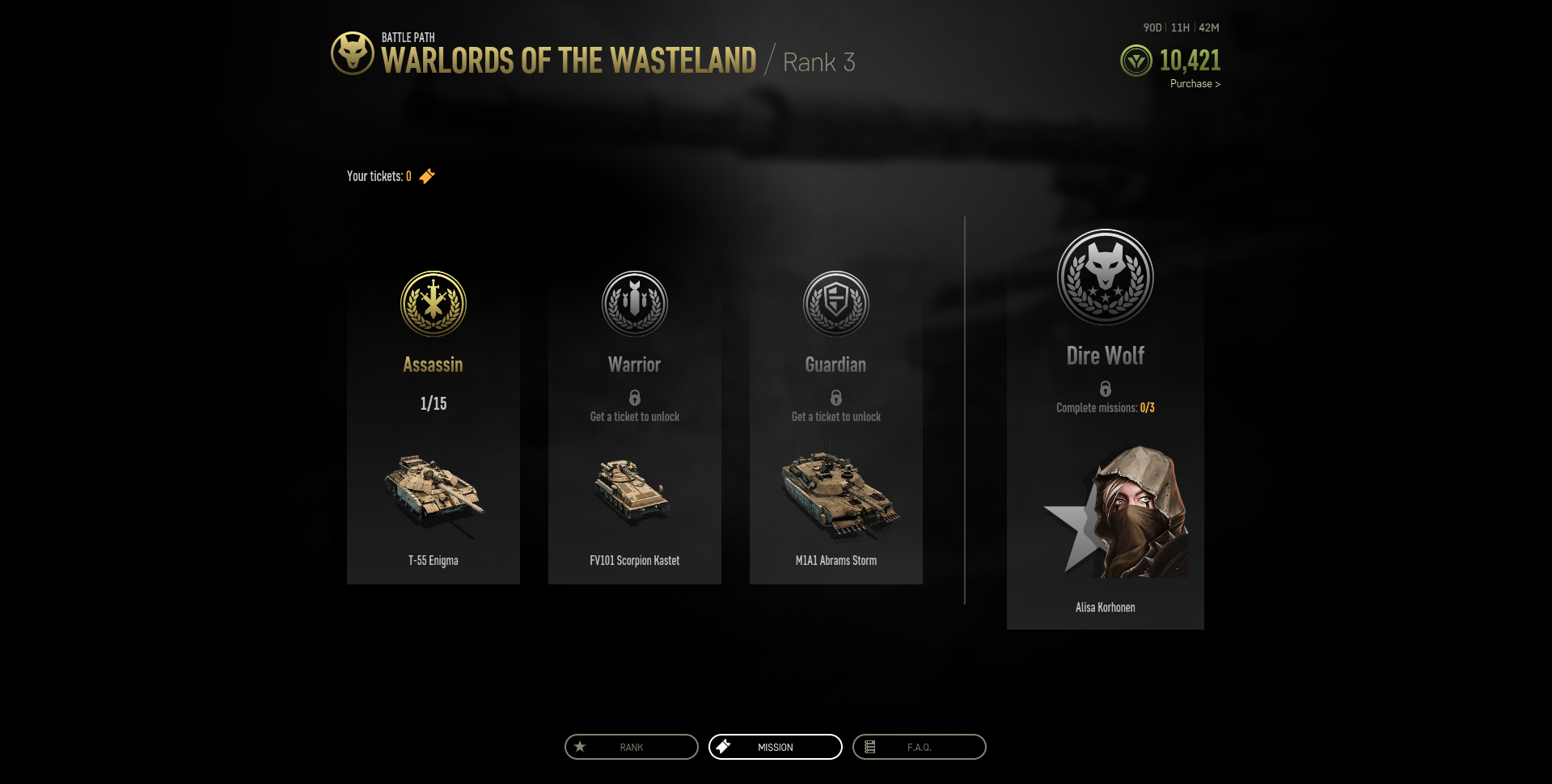 How do I unlock a mission chain (Path)?

You can unlock it by using a Token. A Token can be obtained by reaching Level 1, 7 and 13 respectively.

Can I complete the missions within a chain in any order? 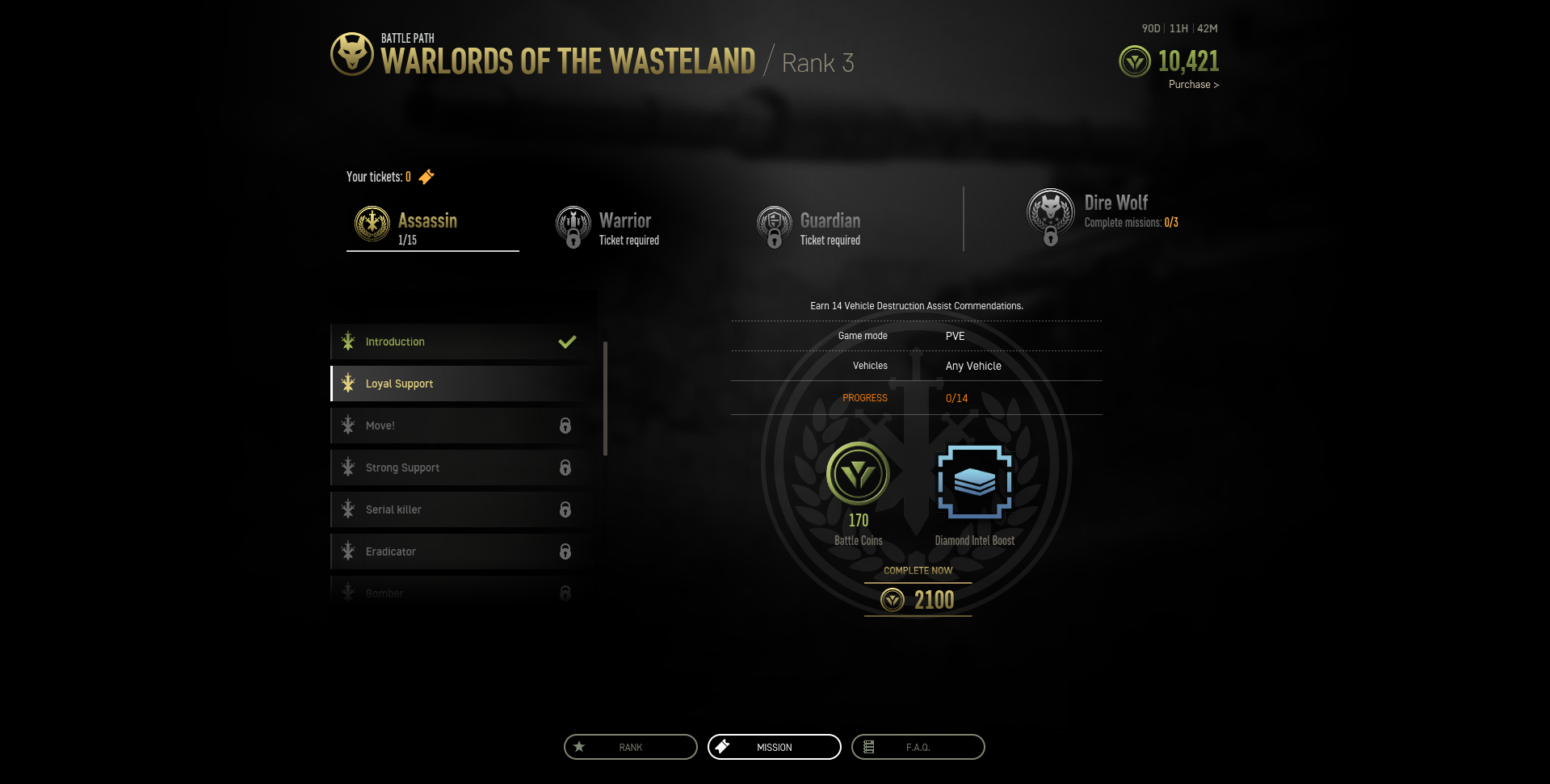 The next one only starts after the previous one is finished. You need to pick up your mission reward manually in the Battle Path window in order to activate the next mission. However, if you earn more than one Token and unlock multiple chains at the same time, it is theoretically possible to have two or even three missions active simultaneously and to complete them all in one battle (if their requirements do not prohibit you from doing so).

Mission requirements are stated in each mission’s description. They can be restricted by:

The fourth chain “Dire Wolf” missions can only be completed in a Tier 9 or Tier 10 vehicle.

Do I also need a Token for the Dire Wolf mission chain?

Can you tell me more about the Wasteland Loot Crates?

I can see that some missions require acquiring a certain number of Commendations of various kinds. What are Commendations?

Commendations are badges awarded directly in battle for accomplishing any of the following actions:

The goal of these commendations is to provide real-time visual feedback to players in order to notify them whenever they've earn some rewards. Commendations themselves do not provide additional rewards. 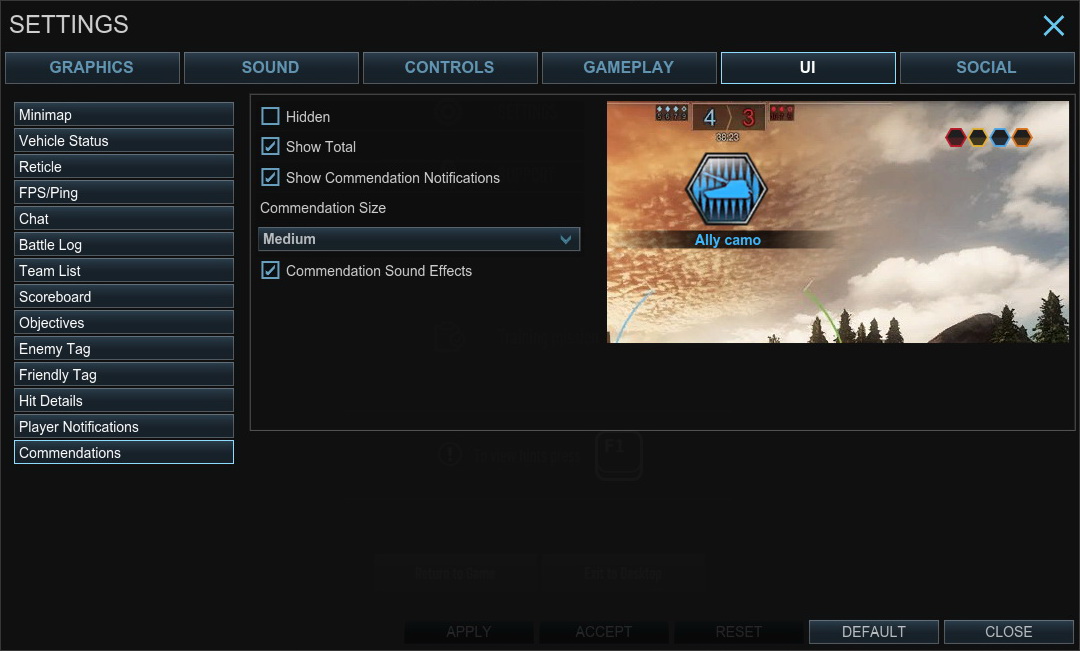 Please note that the commendations may be disabled in the UI. In order to make sure they are enabled, please follow these steps:

Introducing the Warlords of the Wasteland Battle Path

Learn more about the Battle Path premium campaign, coming shortly after the launch of the Arabian Nights season

Learn more about the Battle Path mechanics and rewards from our community contributors, Primer, CMDR_Strayn and H3dsh0t!