To understand the history behind the XM800T, we have to go all the way back to the 1950s and the era of classic APCs. The Second World War saw a boom in armored infantry carriers with virtually every major army deploying them in one fashion or another. The Americans were no exception with their halftracks. After the war, the halftrack APCS evolved over the course of the 1950s and over several tracked APC designs, such as the M59, into one of the most iconic American vehicles of the Cold War – the M113 APC by FMC.

The M113 was not exactly armored in the strictest sense of the word – true to the American "battle taxi" doctrine (carry the troops to the battlefield, unload them and head back), it only protected its crew and passengers from small arms fire and anything heavier (such as heavy machineguns or infantry-carried anti-tank weapons) went through it like butter. That wasn't considered a problem early on – after all, the APC wasn't supposed to stick around for the fight. But it was one of the factors that led the Americans to revise the "battle taxi" doctrine, starting from the mid-1960s.

Another factor was nuclear warfare. As outlandish as it sounds today, the American (and, eventually, Soviet) plans for Europe called for the use of tactical low-yield nuclear weapons – for the Americans, it was considered one of the few viable options to defeat the Soviets, who had massive local superiority in numbers and keeping an equally large army in Europe was simply not economically viable. As for the Soviets – well, if the Americans were doing it, why not them.

This was a problem for the existing APCs. The M113 wasn't NBC-ready at the time and delivering a squad into a radioactive area and just bailing out on them didn't sound very appealing either. A mechanized infantry vehicle that could stick around, withstand some fire and, perhaps, even return it with something bigger than a .50cal machinegun was needed.

This line of thought didn't come without its drawbacks – for one, a standard APC could carry two to three times as many men as an equally big vehicle with a turret that takes up space inside. Needless to say, the infantry commanders weren't happy about that either. And, last but not least: The standard APCs were very cheap. Adding a turret and optics, however, pushes the cost up considerably. 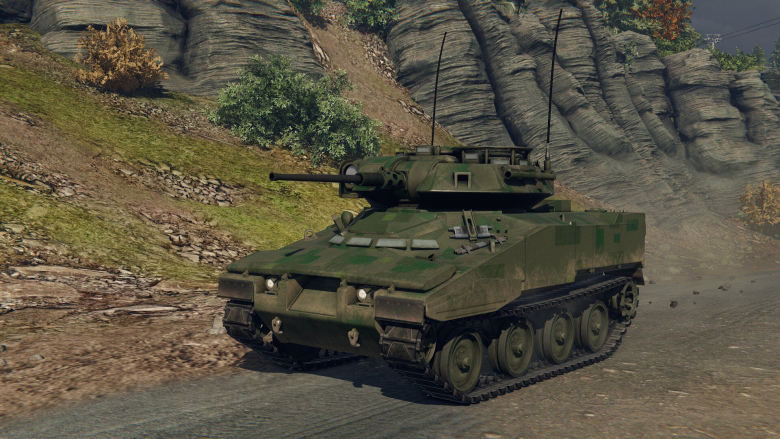 These counter-arguments were only somewhat mitigated later on with the appearance of the BMP-1 in 1966. It looked sleek, it could swim, it could withstand more punishment than the M113 but, most importantly, it had a big gun. In reality, the performance of the low-pressure 73mm cannon was far from impressive, but its appearance along with a sprinkle of propaganda made it look like every Soviet fighting vehicle would have the firepower of a tank.

And then there was the influence of the Vietnam War. For the new mechanized infantry armored vehicle, the war was both a curse and a blessing. It was a curse in the sense that it was extremely costly. Incredible amounts of taxpayer money were funneled into its black hole, more often than not at the expense of other, even promising, military programs. It was this war that killed one of the first American attempts at producing a true IFV, the MICV-65's XM701 (although, to be fair, the prototype had other issues as well).

The blessing, ironically, came in the form of early problematic results for the M113. By the time the M113 actually appeared in Vietnam around 1963, it was practically a brand new vehicle (it only entered service about three years prior) and the "battlefield taxi" doctrine had yet to be used with it in practice. In reality, it was a disaster with the first users, the ARVN troops, disembarking the vehicle without any cover only to be killed by the waiting North-Vietnamese.

The M113 was also vulnerable to heavy machinegun fire – thankfully, the NVA usually lacked a large number of RPG-type weapons, which were very destructive against the thin-skinned M113. The last but perhaps most serious threat to the M113 were the various mines and other rigged explosives. Anti-tank mines could tear the vehicle apart and kill everyone inside and even smaller charges could do some serious damage. As a result, troops later preferred to ride on top of the M113 instead of inside.

The M113 was never designed to be used this way – it was supposed to bail out. But, as usual, the reality of combat differed from the plans laid down in air-conditioned rooms thousands of miles away. The desire to ride on top of the vehicle, with soldiers telling themselves they could spot threats and bail out instead of waiting inside for what they perceived as a sudden and random death from mine explosion, heavy MG fire, RPG fire or other threats, was only one example something unforeseen. 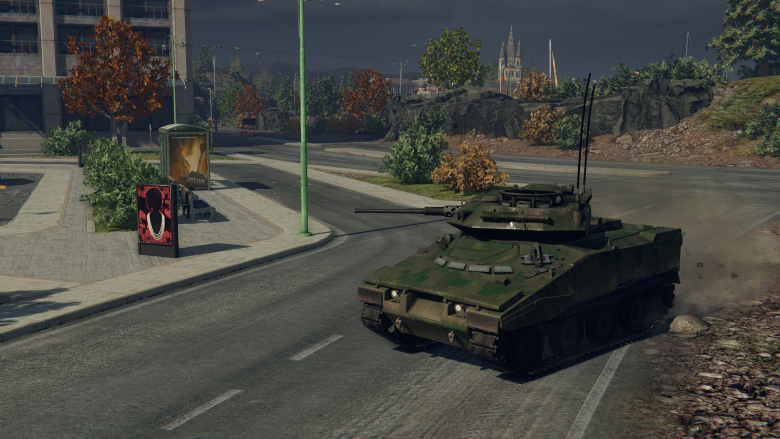 Years later, the Bradley would at one point be offered with firing ports. While widely mocked in the now classic movie Pentagon Wars, this is where this requirement originated from – the primary objective of ports wasn't for troops to hit anything outside with their rifles, but to offer them a way to see what's happening outside to combat their anxiety and claustrophobia.

Based on these factors and especially on the abovementioned appearance of the BMP-1 as part of a large-scale Soviet infantry modernization, the U.S. Army decided to revisit the Mechanized Infantry Combat Vehicle program (MICV) in 1968. The M113 would no longer cut it – it was still in production at that point, but it wasn't capable of threatening modern Soviet vehicles.

This resulted in several considerations starting from 1969. FMC modified one of its M113 to produce an IFV prototype called the XM765 AIFV (Armored Infantry Fighting Vehicle). Another option the army considered was adopting the German Marder IFV, but that was dropped very early on due to the fact the vehicle simply wasn't American. The XM765 wasn't exactly a winner either – it was basically a slightly up-armored M113 with a 20mm cannon. Most importantly, it was too slow to keep up with the upcoming Abrams MBT and was dropped as well.

FMC reacted by producing another vehicle with somewhat different technology called XM723 MICV (Mechanized Infantry Combat Vehicle). It was bigger, sturdier and faster than the XM765. Its steel and aluminum skin could protect it against Soviet 14.5mm bullets and it could go as fast as 72 km/h. There were problems, however, with its underdeveloped armament, which caused further delays. The armament issues weren't the only problem, bringing us finally to the XM800T. 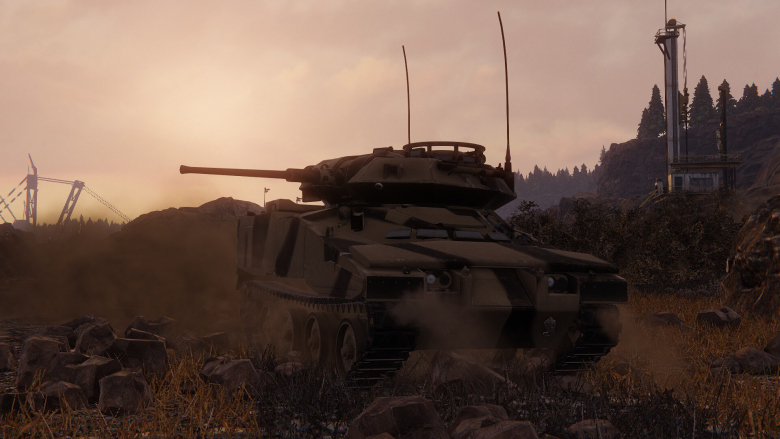 In the early 1970s, military project funding was in short supply due to budget cuts, which is why the overseers of the MICV program were not happy to find out in October 1971 that some of their funds were being diverted to a U.S. Army (specifically Armored Cavalry) program called Armored Reconnaissance Scout Vehicle.

The idea behind it was to replace the troubled Sheridan and the M114 (which was basically just a modified M113, completely unsuitable for its intended scout roles). The issues with the Sheridan are described in our three-part series:

The replacement had to be fast, stealthy and, ideally, air-droppable. Lockheed and FMC were asked to provide their proposals – FMC went for a tracked vehicle while Lockheed proposed a 6x6 wheeled vehicle designated XM800W.

The initial contracts for four prototypes were closed in May 1972, but the number was later reduced to one per producer. FMC's prototype for the tracked category, designated XM800T, was ready in May 1973 and official government testing began in November 1973 (at this point both prototypes already had 6000 miles under their belts).

The tracked vehicle made quite an impression. It was light and agile, weighing 8.6 tons, and was powered by a 280hp version of the Detroit Diesel 6V53 engine paired with the Allison X-200 Crossdrive transmission, allowing it to go as fast as 88 km/h. The power-to-weight ratio was very high for the time – 32.5 hp/t.

While the armor was still thin, it could withstand 14.5mm bullet hits as requested by the army. 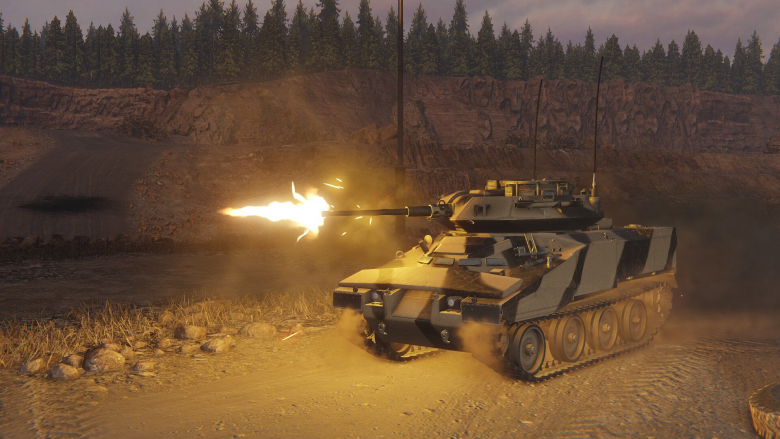 Both the tracked and wheeled prototypes shared a turret, equipped with advanced optics and electronics such as the Delco day/night sights.

The turret was armed with a stabilized 20mm Hispano-Suiza HS.820 autocannon, capable of dealing with the opponents it was expected to come up against, such as the BMP-1. This weapon was license-produced in the United States under the name of M139. The fate of this gun in American service is also interesting with most projects the gun was installed on turning out as failures or cancelled despite their qualities.

And such was the fate of the XM800T. The trials were quite successful and the design was promising, beating Lockheed in nearly every aspect of the tests. However, with the Vietnam War still raging, money was short.

The project was in fact so promising that Congress discussed purchasing 3500 vehicles of this type for 141 thousand USD per piece. In April 1974, that number was reduced to 1147 vehicles.

The decision to cancel the project eventually came from very high up the command chain, officially due to the lack of funding, although it is said that Lockheed, the losing party, also played a role in it as its lobbyists carried a lot of weight in Washington DC. The ARSV program was cancelled in November 1974 and the single XM800T prototype was mothballed – it has survived, even in running condition.

A year later, it was decided to merge the goals of the ARVS program with the goals of the ongoing MICV program, resulting in a development chaos that eventually ended with the introduction of the M2 series (IFV) and the M3 series (armored cavalry) of the Bradley Fighting Vehicle, but that is a story for another time. 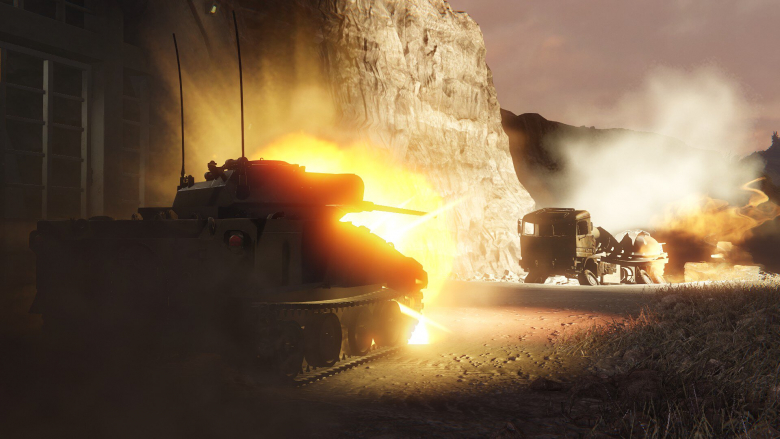 In Armored Warfare, the XM800T is a Tier 3 tracked AFV. Unlike its real-life counterpart, it's not armed with just a 20mm cannon, but also has two unguided LAW launchers. The M72 LAW was a 66mm infantry anti-tank weapon in service during the Vietnam War era (it was fist deployed in 1963), capable of penetrating some 250mm of armor. It was light, rugged and safe. Strapping two of these launchers to a turret represents an unorthodox, but ultimately doable, solution, even though such a weapon would only be effective when the vehicle was stationary and the target directly in front of it at short range.

The LAW was added to the XM800T as an era-appropriate solution to the game balance and it makes it one of the more unique vehicles of its class. In the right hands, the fast and agile XM800T makes for a formidable opponent that is not to be underestimated under any circumstances.