When it comes to modern tanks, few are as iconic as the M1 Abrams. This vehicle remains the mainstay of the American armored forces for nearly four decades and its recognizable silhouette, its distinctive whistling turbine, as well as its performance record during the wars in Iraq make it one of the most recognized symbols of American military power. 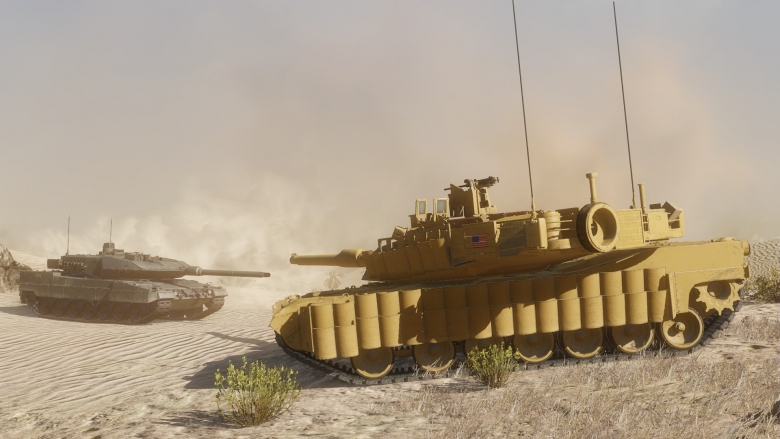 Since its introduction, the Abrams has been upgraded multiple times in order to maintain its effectiveness on the battlefield, resulting in a relatively large number of variants. The most advanced Abrams version currently available is the M1A2 SEP v2, with v3 variant expected to be fielded in 2017. The SEP (System Enhancement Package) upgrade program includes improvements to the tank’s electronic systems and communications, but also other systems designed to enhance the Abrams performance on modern low-intensity conflict battlefields as well as allow it to knock out any enemy armored vehicle it might potentially encounter.

But even this advanced variant is unlikely to be the final Abrams upgrade. Development of the next major variant of the Abrams, the M1A3, is expected to start in foreseeable future, although – as expected – most of its specifications will remain classified for quite some time. No pictures or specifications of the M1A3 variant have been revealed to date, but it’s possible to guess at some of the challenges that the design team will be facing. 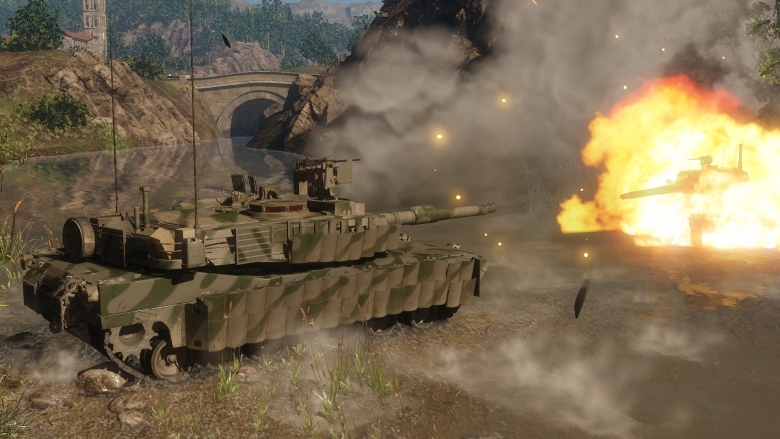 The first obstacle the design will have to overcome will be the weight. While the basic Abrams isn’t as heavy as some of the other modern western Main Battle Tanks, the TUSK (heavy ERA kit) variant is reaching or exceeding the 70 ton boundary, and with modern anti-tank weapons appearing even in proxy wars such as the conflicts in Syria and Ukraine, the demands on vehicle protection will steadily increase. More protection, however, usually results in more weight, and the armor developers will have to find a way to increase the armor’s effectiveness without increasing the vehicle weight too much.

One of the solutions would be an unconventional armor layout or an unmanned turret, but so far there are no indications of development in this direction. That is not to say that there have never been any radical redesign proposals for the Abrams. On the contrary, the unmanned turret version known as TTB (Tank Test Bed) was built and trialed. It is far more likely, however, that the basic vehicle layout (with a manned turret and manual gun loading) will be kept and developers will instead focus on using modern alloys and other technologies to keep the weight at a minimum.

Another eventual problem will be firepower. For all its quality electronics and advanced systems, the Abrams is still armed with the 120mm M256 smoothbore gun, a license-produced variant of the Rheinmetall L/44. Even with the most advanced ammunition, the gun will eventually require an upgrade. There have been multiple proposals to this end in the past. One of the most radical ones was the development of a 140mm cannon, initially envisaged for the so-called Block III tank – a futuristic MBT designed to counter a future Soviet MBT threat, a hypothetical powerful tank that the American analysts expected to appear eventually.

The prospects of a lengthy development process for a new MBT program forced the U.S. developers to return to the modernization of the Abrams, resulting in the ATAC (Advanced Tank Cannon) – a 120mm and 140mm variant of the XM291 gun. The gun was designed to be fitted into “regular” Abrams turrets. It could be loaded either manually or with an automatic loader. The two calibers were actually interchangeable – it was possible to change one gun for another within the space of six hours in field conditions. The 120mm variant could use the same shells as the M256 while the 140mm was designed to utilize shells of this caliber developed by the Germans.

The ATAC gun was mounted onto the standard M1 Abrams turret, but it is best known for its appearance on the CATTB (Component Advanced Technology Test Bed) prototype, paired with an automatic loader. The CATTB participated in military trials in 1990 and it was received positively with some exceptions. Unfortunately for its development, the Soviet Union collapsed in 1991, and with the disappearance of its raison d'être, both development programs (CATTB and TTB) were cancelled and the focus shifted towards modernizations that were not as radical, resulting in the M1A2 model.

There was one more major Abrams upgrade prototype in development: Thumper by Lockheed-Martin. It was essentially a de-tuned CATTB. It had the same protection levels as the M1A2 and it was armed with the ATAC XM291 as well, but it too had its development cancelled (along with the M8 Thunderbolt).

The vast majority of information about the development of the Abrams from the early 1990s onwards is still classified, although pieces sometimes do slip through the cracks. In 2010 for example, a strange massive Abrams variant was photographed being transported by train in the United States. Speculations arose about it being the new M1A3, but it soon became clear that it was “just” the old Thumper prototype. Nevertheless, its pictures in connection with M1A3 speculation arise on the internet from time to time. 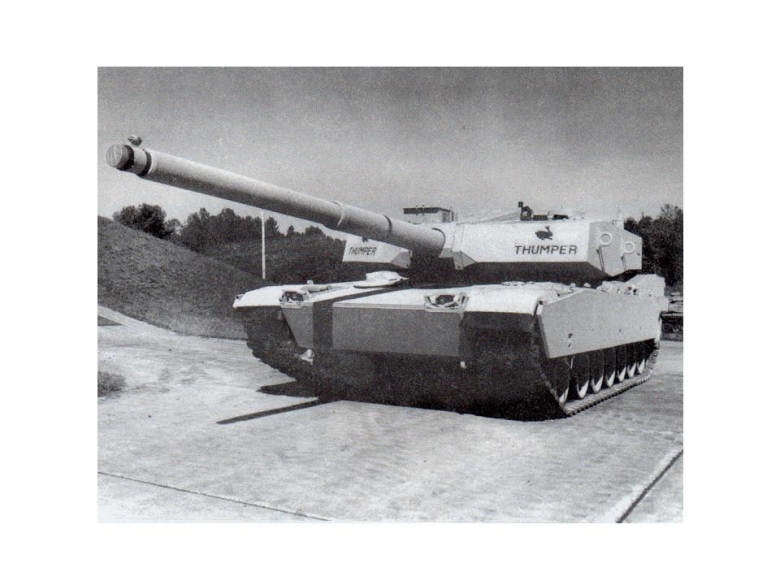 Several more Abrams firepower upgrades eventually appeared, such as the Fastdraw automatic loading system, but the most important was the development of the XM360 120mm smoothbore gun (initially intended for the cancelled Future Combat System program). Its ballistic properties are, according to available sources, comparable to the M256, but the gun is lighter and slightly longer. Its variant developed specifically for the Abrams is called XM360E1. It is possible that this will indeed be the future weapon of the upgraded Abrams.

Of course there is another obvious candidate: The Rheinmetall L/55. This gun was tested (under the designation of M256E1) but it was found out that the longer and heavier barrel caused issues to the existing Abrams gun mount and stabilizing mechanism. It is therefore more likely that the future Abrams will be armed with the XM360 – after all, a prototype of that gun was already built and successfully tested.

The Armored Warfare XM1A3 is, as its name suggests, an experimental vehicle consisting of the most advanced modules currently available and represents Obsidian Entertainment’s take on the latest member of the Abrams family. It features a number of modules that were already revealed, prototyped and tested in the past, combined to make the deadliest M1 series vehicle yet. 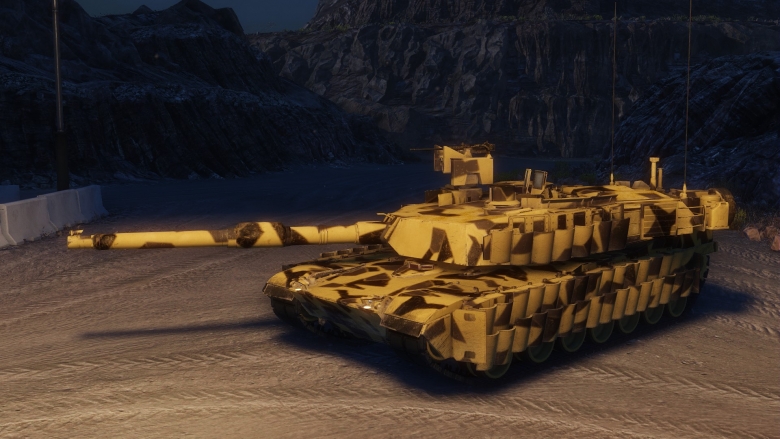 The model itself is based on the M1A2 SEP v3 vehicle with an added ARAT-2 ERA kit. The armament consists of the 120mm XM360 with the 140mm ATAC gun as an upgrade. Much like the Leopard 2A7-140, the XM1A3 is a versatile tank capable of fulfilling most MBT roles on the battlefield. Its massive ERA kit protects its sides, making it highly resistant to HEAT rounds and guided missiles. Good mobility allows it to reach its destination quickly, and its firepower is on par with other Tier 10 vehicles. It is, however, worth noting that the stock 120mm gun cannot fire guided missiles.