The Wiesel AFV is, without a doubt, one of the most distinctive and unique vehicles of Armored Warfare. At first glance, the Wiesel represents an interesting throwback to the pre-war era of tankettes – tiny, cheap vehicles that served more as slow, mobile machinegun nests than actual armor. And it is not just a passing resemblance – the Wiesel's role on the battlefield does not fundamentally differ from that of the tankettes of old.

Development of the Wiesel began around 1969 when the West-German military decided to find a replacement for the Kraftkarren quad, used by German paratroopers. Unlike in other armies, the German paratroopers were not really considered an offensive weapon. Instead, they assumed the role of an elite, rapid-response force that would be dropped into hot zones to quickly bolster defenders wherever needed. This role reflected the mostly defensive nature of the Bundeswehr.

To enhance their firepower, German paratroopers were equipped with light Kraftkarren quads from the early 1960s. These were little more than four wheels with an engine and a flat bed and while they were very light, they could fit into a helicopter and be used to transport all kinds of things (including 20mm cannons and later TOW launchers). They offered zero protection to their operators, which was far from ideal. The German command decided to equip the elite paratroopers with a different kind of carrier, protected at least against small-arms fire and capable of carrying bigger weapons than a basic 7.62mm machinegun – ideally autocannons or guided missile launchers.

The very first requirements for such a vehicle were issued in 1970. At first it was not really clear whether the vehicle would be tracked or wheeled. The most important requirements included:

In other words, the vehicle had to fit into a CH-53G helicopter (a license-built CH-53 Sea Stallion). This meant it had to be small in size and also imposed severe weight constraints on the project – the CH-53G only had a carrying capacity of 6 tons. Initial research into the feasibility of these requirements was conducted by Porsche and led to a new set of requirements, released in 1973. Five companies (Porsche, IBH, GST, Faun and Rheinstahl) showed interest in making their own proposal for this project, now designated Waffenträger LL – both wheeled and tracked proposals were submitted but, in the end, it was decided that only a tracked vehicle would be able to achieve the desired properties and Porsche's model was chosen as the best. Porsche was selected as the general developer and producer of the vehicle in June 1974 and a contract was signed. The vehicle received the Wiesel designation at this point.

Two variants of this weapons carrier were to be developed:

The first prototypes were built in 1976 and testing started in October of the same year. The testing continued throughout 1977 and 1978, but in 1979, the Wiesel project was suddenly cancelled much to the chagrin of German paratroopers, who were already counting on retiring the Kraftkarren quads – the last of them were to go in 1989.

Followed by rather vocal and negative (to put it mildly) feedback from German paratroopers, a light Waffenträger (weapons carrier) project was effectively restarted from scratch in 1981 – a mere two years after the Porsche Wiesel was cancelled. This time, two different vehicles were requested – one that would weigh 6.4 tons and would be transportable inside the CH-64G and one that would weigh 3.2 tons and could be transportable in a sling by the same type of helicopter. This time, 19 armor producers (both German and foreign) were asked to submit proposals for a vehicle that would essentially be the same as the one Porsche developed.

Needless to say, Porsche was not amused and immediately re-submitted slightly modified results of the earlier cancelled Wiesel 1 program. In 1983, the German Ministry of Defense decided to proceed with the tracked variant by Porsche and with a light wheeled vehicle by Daimler Benz. The other contestants were politely informed that their proposals had been declined. Porsche's Wiesel and the Daimler Benz proposal were to compete against each other in comparative trials with the main parameters defined by the ministry as such:

And last but not least, the first vehicles had to be delivered by 1989. Porsche won the trials but not without some adjustments to its prototype – the vehicle was to use a Volkswagen 2 liter 5-cylinder diesel, which was too heavy and the vehicle had to be redesigned with different armor consisting of new, lightweight steel plates. Porsche was finally (once again) awarded the development contract in June 1985. Development only took approximately 18 months and was finished by 1987. Interestingly enough, Porsche developed the vehicle but not its manufacturing process as it wasn't sure it would be selected as the winner, as a result of which the project would be far more expensive than previously anticipated.

The result of the development was a very unique type of light vehicle. It only had a crew of two, weighed approximately 3 tons and had very thin steel armor, essentially protecting the crew from 7.62mm small arms only – anything heavier than that would go right through. Of course, it was not the Wiesel's role to just stand there and take punishment. The vehicle had excellent overall survivability thanks to its small size, firepower and speed. Its mobility was provided by an 86hp Volkswagen R5 turbocharged engine with intercooler. While 86hp might not seem much, the Wiesel 1 had an impressive power-to-weight ratio of 28 hp/t thanks to its low weight. 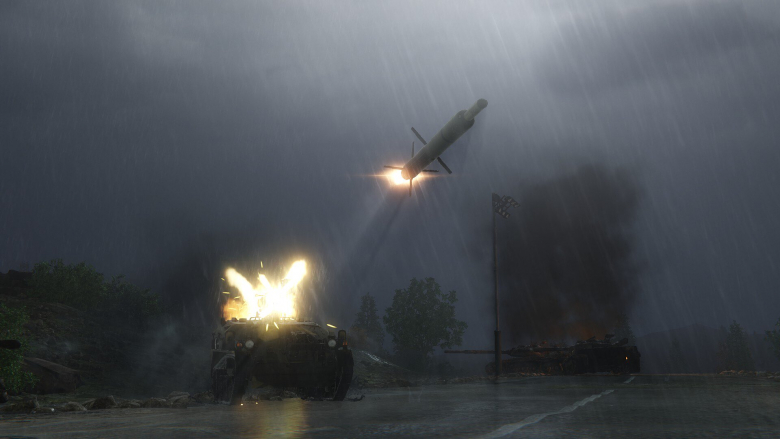 The engine was paired with a 3-gear 3HP-22 automatic transmission that allowed the vehicle go as fast as 80 km/h. It's worth noting that during peace time, the speed was artificially limited to 50 km/h. Additionally, thanks to its small suspension, going that fast ranged from uncomfortable to practically suicidal, depending on the terrain. The vehicle was also extremely nimble. Both the engine and the transmission were commercial products, allowing Bundeswehr to save a lot of money while providing very easy access to spare parts.

The vehicle was officially accepted into service on June 5 1987. A production contract was signed in March 1988 for 243 vehicles (210 Wiesel 1 TOW and 133 Wiesel 1 MK variants), which were delivered between 1990 and 1992. Twenty years after the decision, German paratroopers finally had their light weapons carrier.

The MK (autocannon) variant weighed 2.881 tons and was armed with a 20mm Rh 202 DM6 autocannon, operated by the vehicle commander (who also acted as the gunner and loader). The gun does not fully traverse – its traverse angle is limited to 110 degrees on each side from the vehicle axis. The gun can elevate to +45 degrees and depress to -10 degrees. It has a dual-feed belt system that allows the operator to instantly switch between AP rounds and HE rounds.

The variant currently available in Armored Warfare is, however, the TOW variant. Unlike the MK variant, the Wiesel 1 TOW has a crew of three (driver, commander/gunner and loader). The TOW variant weighs 2.846 tons (power-to-weight ratio of over 30 hp/t) and – as its name suggests – is armed with the American Hughes BGM-71A-1 or A-3 TOW (Tube-launched, Optically tracked, Wire-guided) anti-tank guided missile system, which is the basic BGM-71A with extended range.

The launcher is operated by the vehicle's commander. The vehicle carries only 7 missiles – 5 in the hull, 1 in the launcher tube and 1 lying on top of the vehicle outside. The standard TOW optical sight is enhanced by an AN/TAS-4 thermal imager, making the Wiesel TOW fully night-capable. 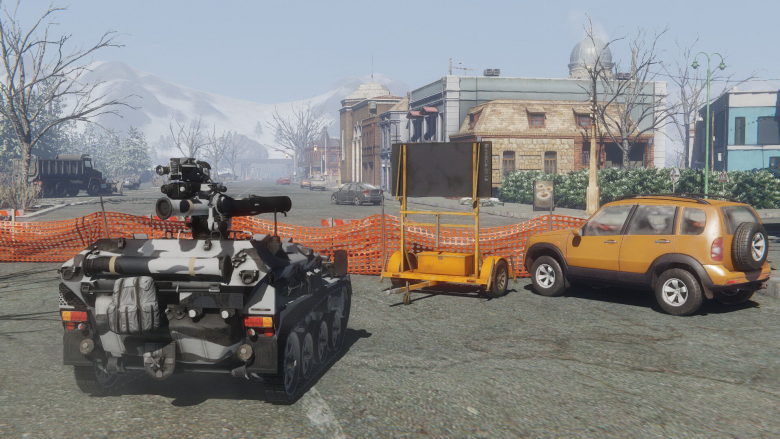 The launcher is not capable of full traverse – instead, it is limited to 45 degrees to each side from the vehicle axis. The maximum depression and elevation is +/-10 degrees. The TOW launcher's maximum combat range is 3.750 meters and the minimum range (not modeled in Armored Warfare) is 60 meters. Its 4kg HEAT warhead is capable of penetrating around 600mm of RHAe and its missile velocity is 280 m/s.

The basic Wiesel 1 TOW variant is called Wiesel 1A0 TOW. The Wiesel 1A1 TOW is a slightly improved version with an additional 7.62mm MG3 machinegun and a modified commander's seat. The final version, Wiesel 1A2 TOW, is basically the older Wiesel 1 fitted with a German FüInfoSysH battlefield information system.

The Wiesel 1 TOW is currently still in German service. Since its introduction, it has been used mostly in various peacekeeping operations as part of the German contingent (Germany remains the sole user). The Wiesel 1 TOW has therefore appeared over the years in former Yugoslavia, Iraq and Afghanistan. 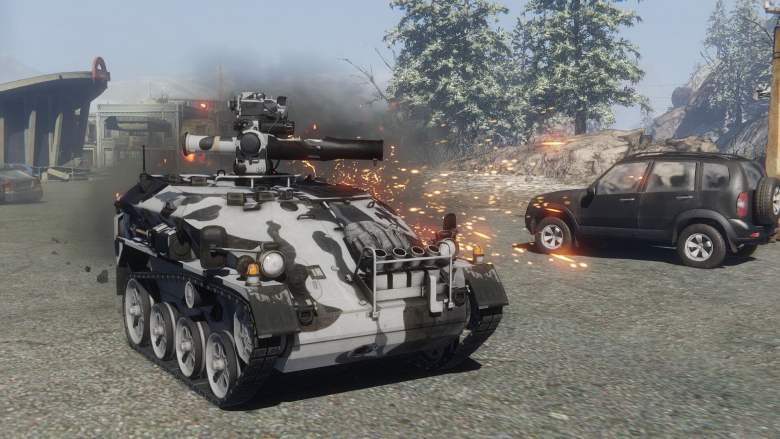 While it is suitable for avoiding enemy fire thanks to its blazing speed, its extremely thin armor does not protect it against IEDs and RPGs, making it far too fragile for urban duty. Luckily, the Wiesel 1 TOW never had to be used in the role it was intended for – reinforcing the reeling Bundeswehr against an onslaught of Soviet armor – but thanks to its scouting capabilities it still remains a useful piece of equipment.

In Armored Warfare, the Wiesel 1 is essentially a very fast AFV and Tank Destroyer hybrid. Position yourself carefully, take an opponent out with your missile launcher and quickly move to another position while spotting enemy forces along the way. But whatever you do – don't get caught off-guard, a stationary Wiesel is a dead Wiesel.