In our earlier article, we have mentioned the difficult development of the tank support vehicle class in the Soviet Union and later in Russia. Today, we are going to have a look at the ultimate development of the concept, the Russian BMPT vehicle family.

The BMPT (which stands for “tank combat support vehicle”) was developed as the result of the experiences from the past. The producer designation however is “BMOP” (stands for “fire support vehicle”) as well as the unofficial (commercial) one: the “Terminator”. The name Ramka-99 comes from the entire development program the vehicles were a part of. 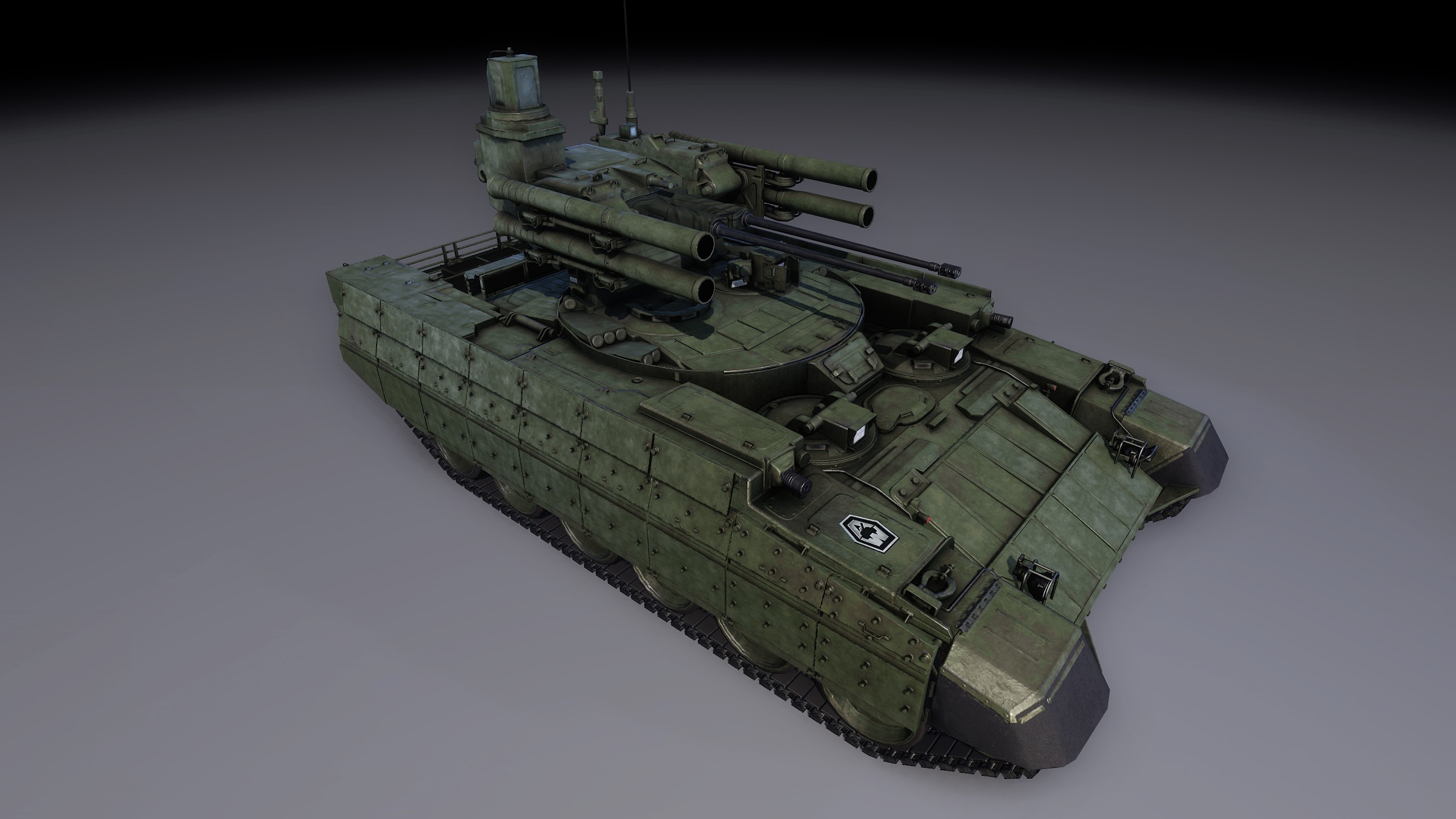 It is a heavily armored vehicle based on a regular tank hull, built to support tanks against both soft and armored targets although its capability to engage enemy armor is limited by the amount of anti-tank guided missiles carried.

Uralvagonzavod picked up where its predecessors left off and designed a vehicle using a modified hull of either the T-90 or the T-72 main battle tank. This allowed the factory not only to produce using well-established procedures but also to actually convert existing vehicles to the BMPT standard by switching the old turret with the BMPT one.

The first mock-up was shown to the public in 2000. Originally, the vehicle was supposed to be armed with one 30mm 2A42 cannon (paired with a machinegun) and four older 9M133 “Kornet” missile launchers but soon a second 30mm gun was added to the turret and the missile launchers were replaced by the more advanced “Ataka” weapon system. Secondary armament consists of a pair of 30mm AG-17 grenade launchers.

The vehicle is heavily armored – apart from the standard protection of the T-72/T-90 hull, a “Relikt” ERA kit was installed to enhance the survivability of the vehicle against HEAT projectiles, commonly fired by infantry AT weapons.

The crew consists of five men (commander, driver, gunner and two grenade launcher operators). The vehicle is usually powered by the engine of the “host” tank (either the 780hp engine of the T-72 or the 1000hp engine of the T-90), influencing the performance of the vehicle (although the general maximum speed is listed by the producer as 60 km/h for both models). 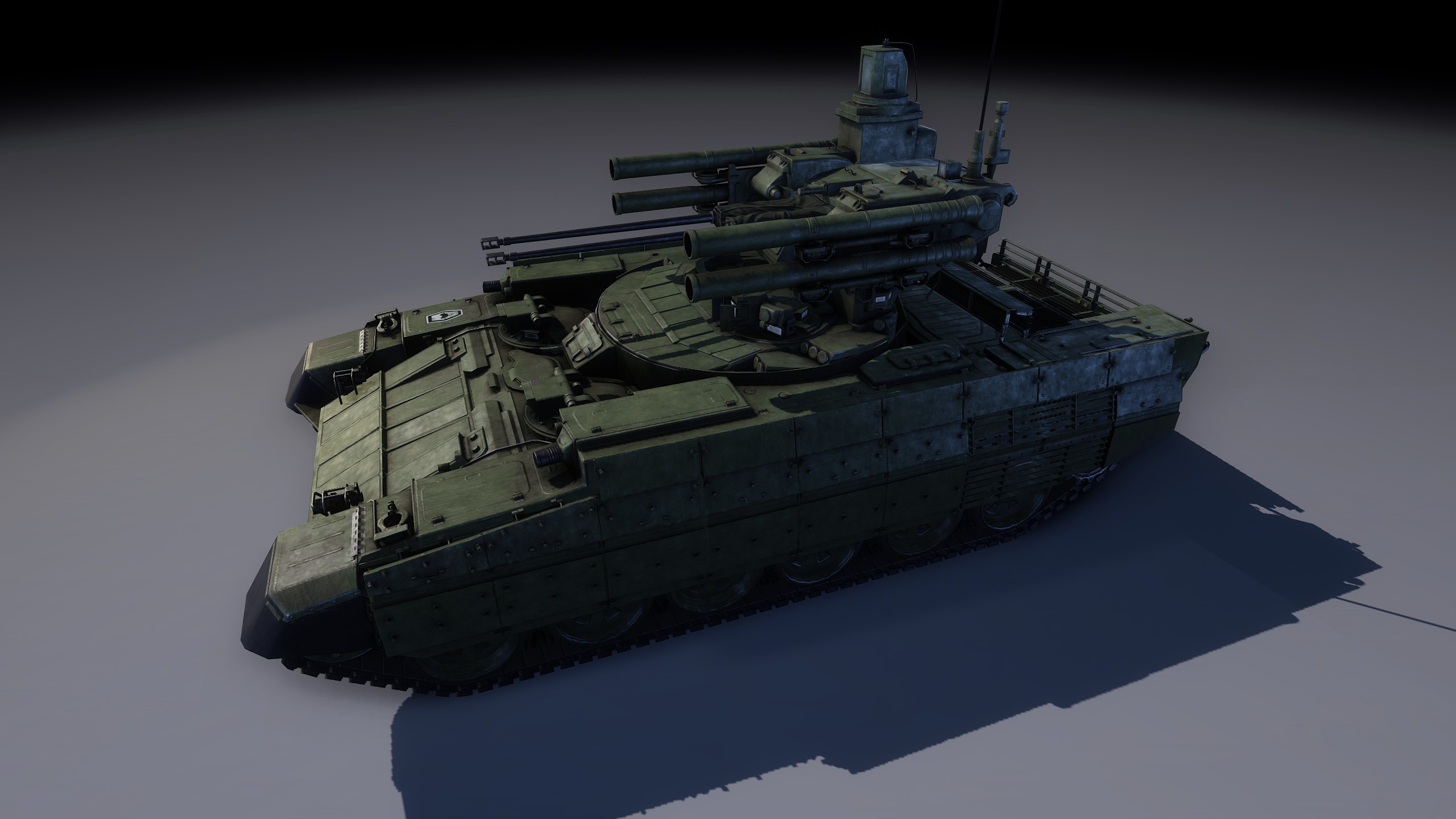 The Russian forces actually liked the vehicle and in June 2010, the commander of the Russian ground forces General Aleksei Maslov announced that until the end of the year the Russian military would be receiving a company of these vehicles, specifically 10 BMPTs (3 vehicles per platoons, three platoons and one company commander’s vehicle). This statement did not reflect the position of other officials of Russian Ministry of Defense, who earlier that year in April issued another statement, citing the project as unsuccessful. This position was overturned in mid-2017 and it seems that the Russian Army ordered a number of Terminators after all.

At the time, however, this left the producer with one option only – to export them. Kazakhstan however was the only truly interested party in 2010 with three vehicles (T-90 variant) being delivered (incomplete) in order to participate in the Astana military parade of August 30, 2011, only to be delivered back to the producer for completion after that.

In order to find the best way to use these vehicles in combat, the three were then attached to the Almaty land forces institute. There they were tested with the goal of finding suitable tactics for their use.

These tests included the cooperation with the Russian TOS-1 “Buratino” 220mm rocket launcher that would first cover the target are with a salvo of thermobaric or incendiary missiles and the BMPT’s would then move in to “mop up” any survivors. This tactic – while arguably effective – was found to be problematic: a typical target for the vehicles would be the terrorist insurgents that would – instead of operating in remote locations – be often found infiltrating various residential areas. Using such brutal methods on civilian housing in the effort to dislodge them would certainly constitute a war crime. Nevertheless, the tests were concluded successfully. 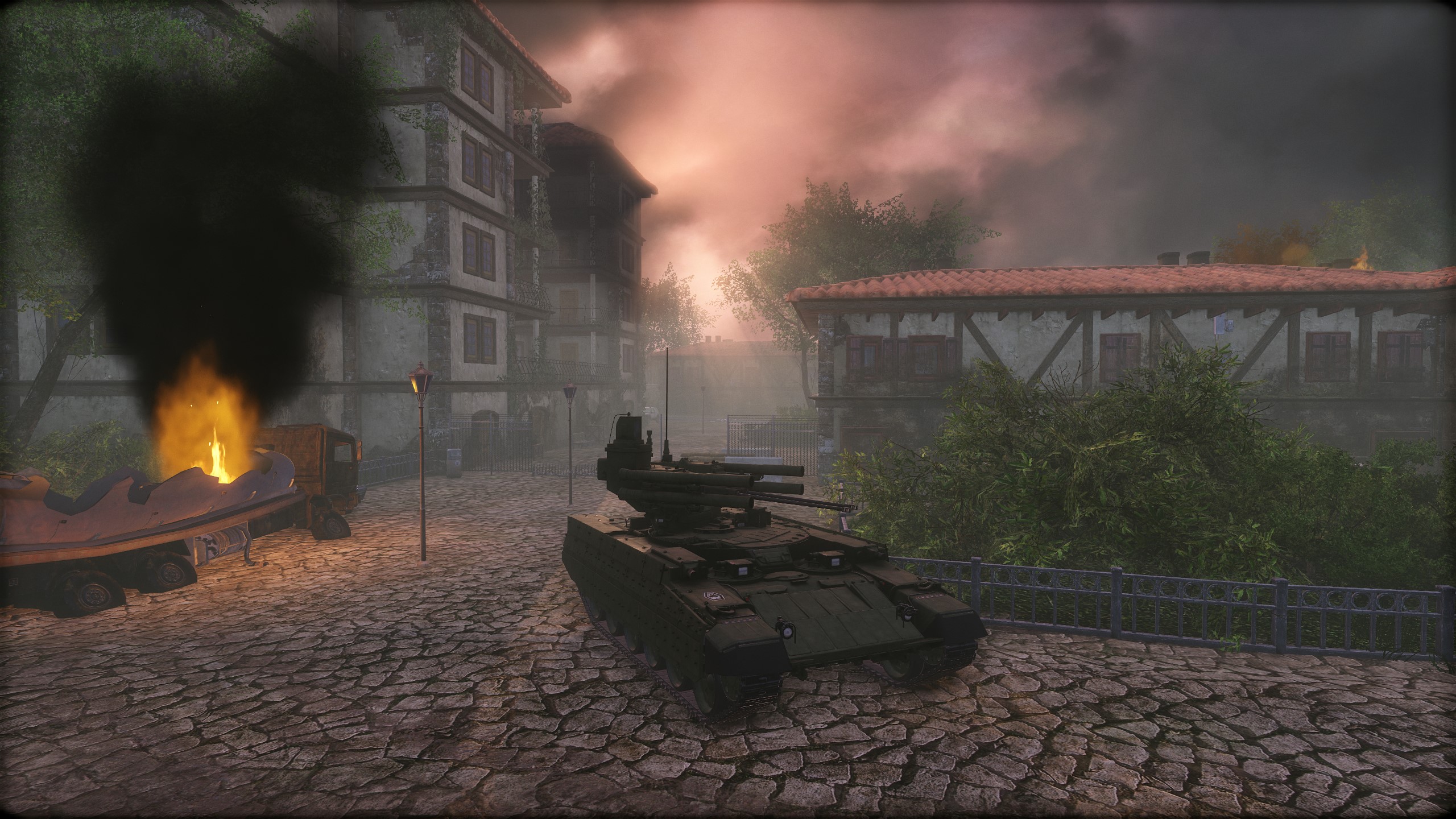 Based on these trials, a contract was signed between the Russian Federation and Kazakhstan to deliver multiple conversion kits for the T-72 tanks in order to turn them into the BMPT’s. The vehicles for Kazakhstan would have some differences compared to the prototypes – namely the electronics used and the fact that because the Kazakhs opted not to equip their vehicles with the grenade launchers, their crews were reduced to three men.

This modification would later be known as the BMPT-72 and currently is offered only in the form of a conversion kit for existing vehicles. The exact total amount of vehicles ordered by Kazakhstan is not known – in addition to the original order of 10 vehicles, 30 more were ordered in 2012 and a license production contract was also signed with the Russians delivering the kits and the Kazakhs assembling them themselves.

Other countries’ reactions to the BMPT were initially lukewarm. The producer claims that in 2012, as many as 12 countries have shown interest and tested the vehicle, including Algeria (that tested the vehicle in April 2013), Azerbaijan and Peru. In 2016, however, Algeria ordered some 300 Terminators, the first major customer for the vehicle. Uralvagonzavod continues to offer the Terminator and it’s possible that the Terminator has not yet said its final word.

In Armored Warfare, the BMPT (or Ramka-99, as is the in-game vehicle called) is a Tier 8 Tank Destroyer. It is a typical representative of the “Terminator” sub-class of heavy Tank Destroyers – typically converted Main Battle Tanks with their primary weapon system consisting of autocannons and guided missiles.

The other vehicles of this type in Armored Warfare are:

The defining feature of these vehicles is the ability to fire guided missiles in salvos from their multiple missile launchers. This allows them to deal tremendous damage in a short period of time, making them incredibly dangerous to vehicles without special anti-missile measures such as an APS or an ERA kit. They can also take tremendous punishment thanks to their MBT roots and, subsequently, their high hitpoint count. 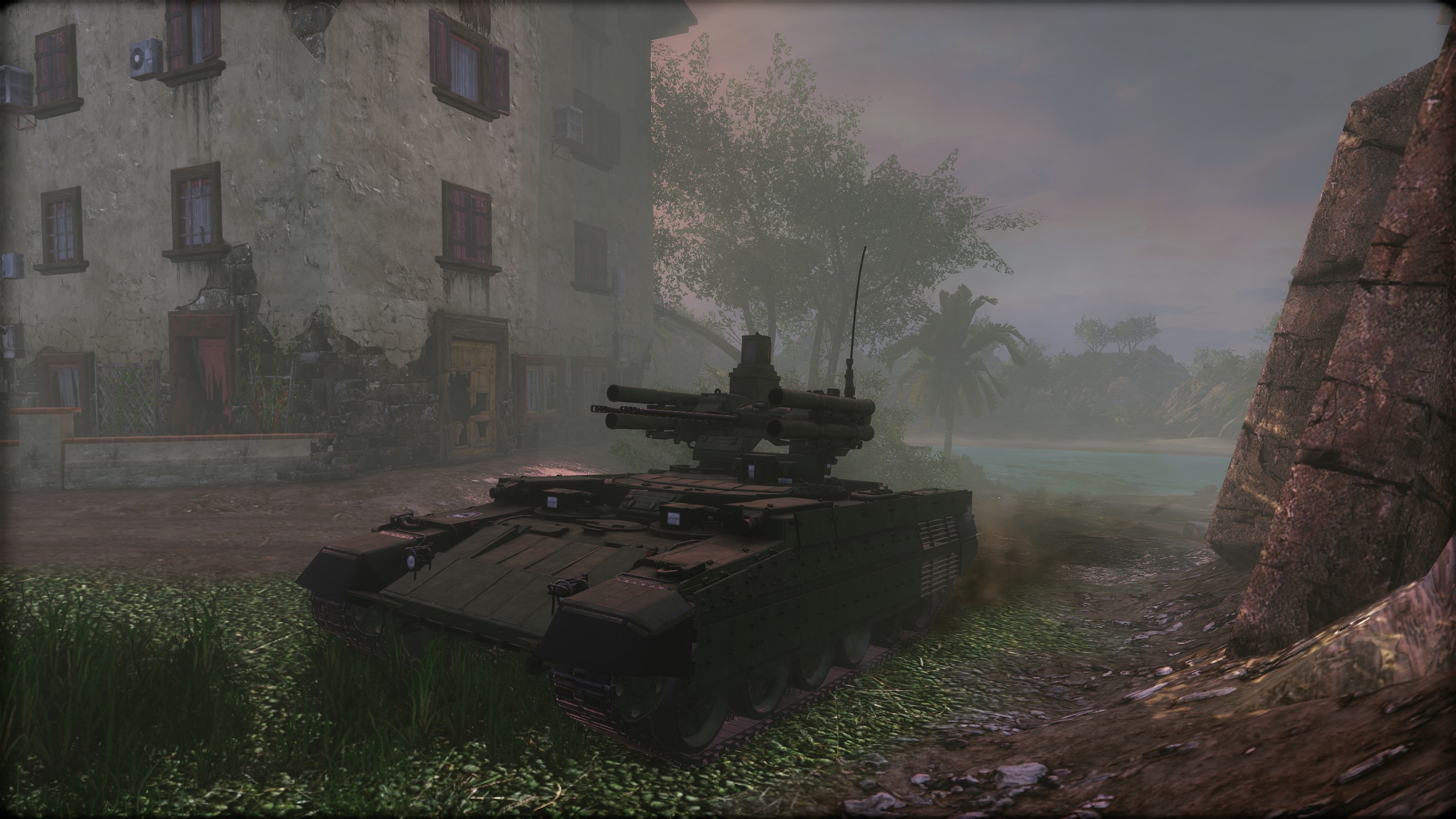 On the downside, the Ramka-99 is not very stealthy and even though its unmanned turret takes reduced damage, it also lacks any meaningful armor, making the penetration of any shots fired it a certainty. This vehicle can be played as mid-range support, staying behind the MBT picket line and shelling the enemy with its guided missile fire before retreating to reload. Should a pesky AFV get behind your line, it can make short work of it with its autocannons.

Introducing the tier 4 FV438 Swingfire armored fighting vehicle, which is available during the Armored Warfare early access phase of testing