The Panzerhaubitze 2000 is 155mm German self-propelled artillery system and one of the most modern SPGs currently in use anywhere. 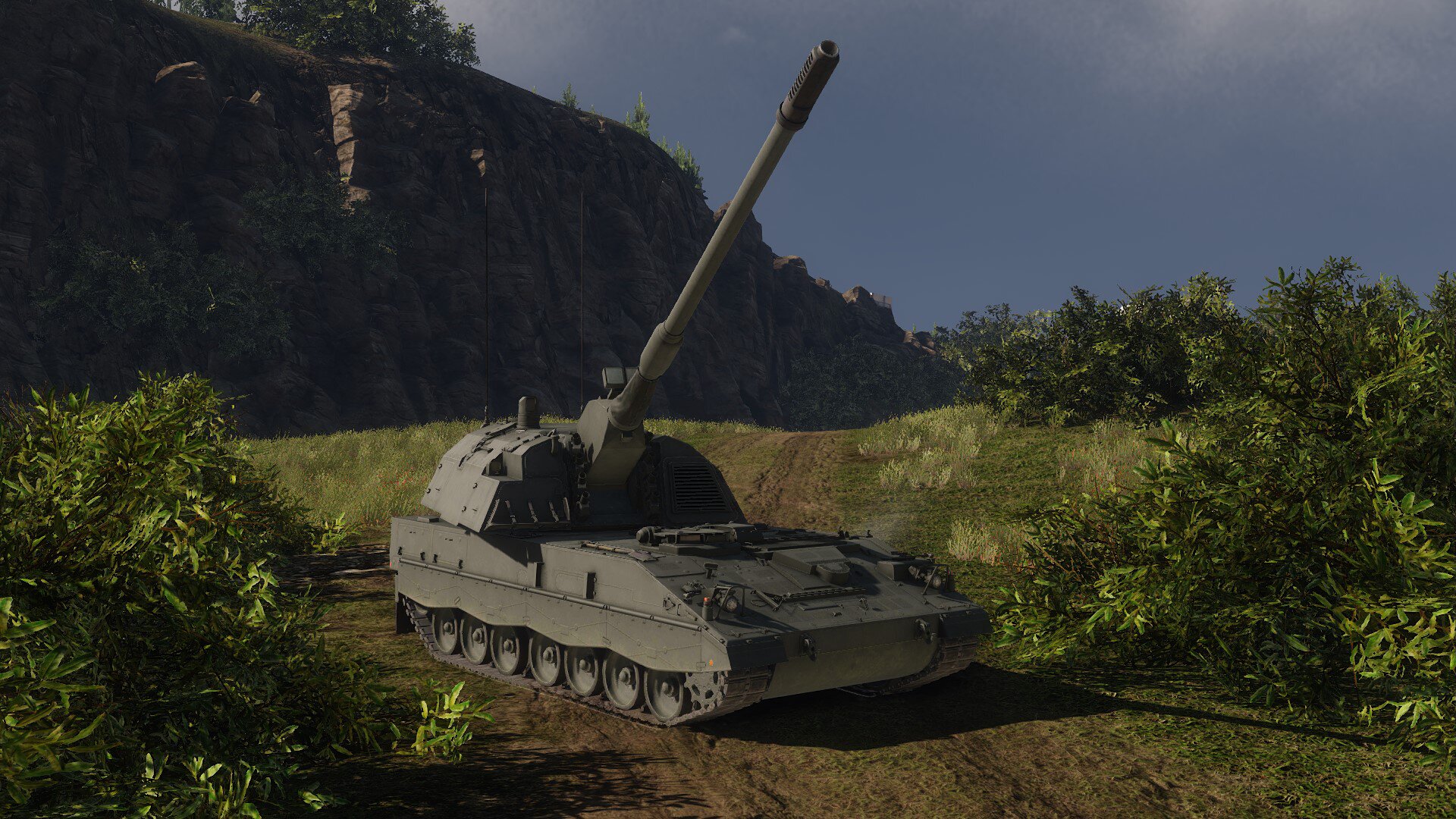 Much like a number of other European military development programs, it is a result of a single idea:

“Let’s build something so that we don’t have to use American stuff.”

In this case, the “American stuff” in question was the M109 Self-Propelled Howitzer. And so, a joint West-German, British and later Italian program was launched in the 1960s to develop a true European SPG to replace the M109 in the NATO service. The program was called SP70 (self-propelled gun for the 1970s).

With three different countries (each with its own ideas about the requirements), it went about as well as you’d expect. After roughly ten years of arguments and millions spent, the actual development of the vehicle started in 1973 and five prototypes (using German Leopard and Marder components) were ready in 1976. They underwent a series of trials, in which they were promptly outperformed by the decade-old M109. Additionally, they suffered from poor reliability and were generally deemed a bad design.

After the fiasco, Britain and Italy bailed out and decided to just adopt the M109 and develop their own artillery systems (resulting in the British AS90 and the Palmaria) while Germany just kept the project formally running until 1986 when it was finally cancelled.

Realizing the need to still have a replacement to the M109, the German government issued a 183 million DM contract to two development groups (consortia) to come up with a suitable project. The program was called Panzerhaubitze 2000 (armored howitzer for the year 2000).

The two groups were:

The requirements for the vehicle included:

Some of the requirements determined the design of the vehicle. In order to achieve the required protection and to install the NBC system, the vehicle clearly could not be open-topped. 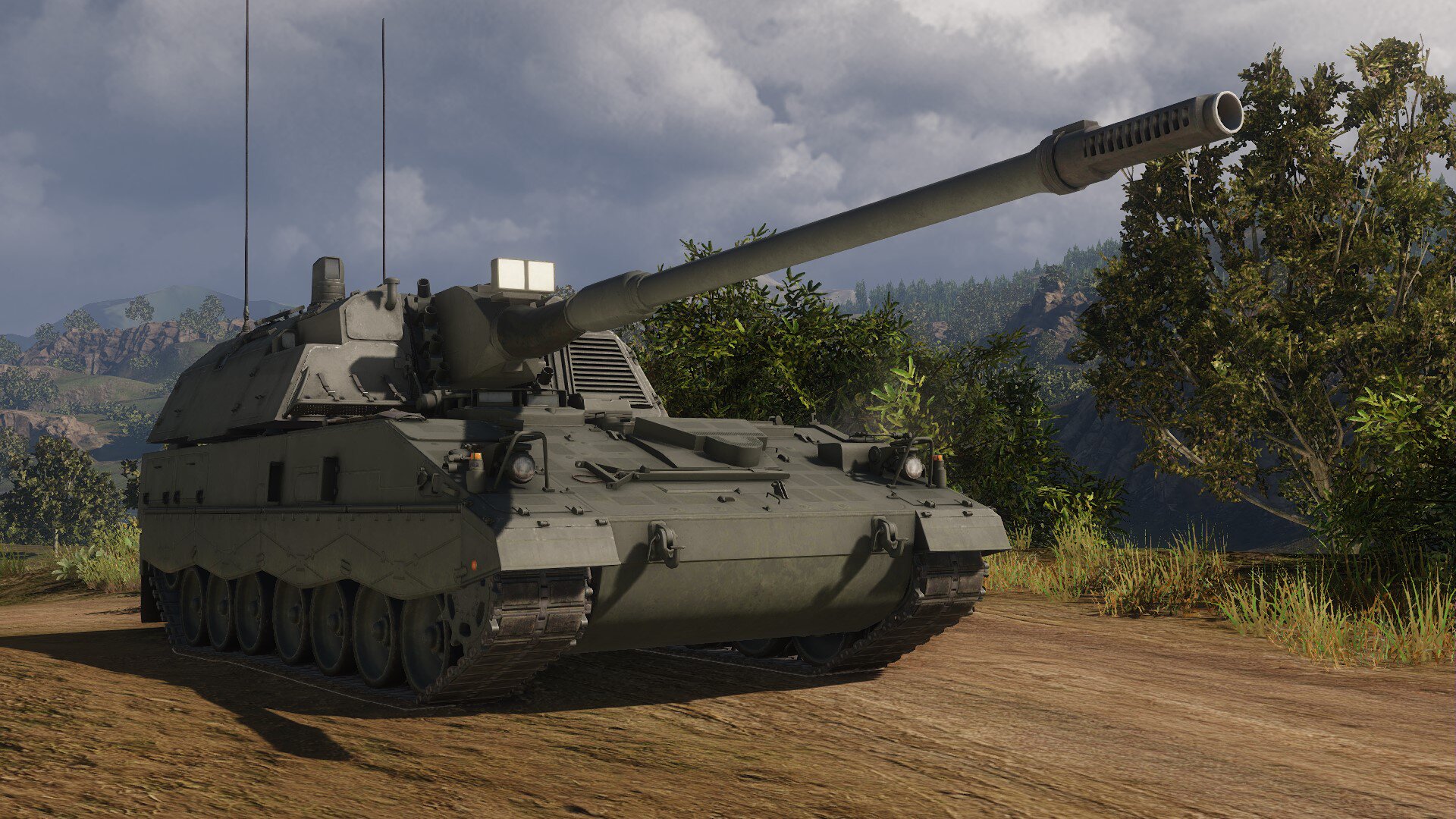 Each consortium then built a prototype – these were evaluated in the late 1990 and the Wegmann and MaK group won. Four more prototypes were ordered for further trials and in 1996, the consortium received an order from the German Ministry of Defense to deliver 185 Panzerhaubitze 2000 vehicles.

Interestingly enough, the Germans planned to actually re-name the vehicle after an animal upon its introduction to service with a number of names being discussed such as “Taurus” (the name of one of the prototypes), Rhino, Bull and others, but no consensus could be reached and so the old name stayed.

The Panzerhaubitze 2000 weighs 56 tons (57.6 tons with roof protection) and is made of steel. As befitting its role (and size), it’s not really heavily armored –the armor is just thick enough to protect it against artillery shell fragments and heavy machinegun bullets. As is common for this type of vehicle, it does not need to get any thicker because the vehicle is not intended to engage enemy targets directly.

The Panzerhaubitze 2000 consists of a hull (sharing some Leopard 2 components) and a fully traversable turret, armed with a 155mm Rheinmetall L/52 howitzer. The howitzer is automatically loaded and can fire up to 10 rounds per minute (or 3 rounds in a 9 second burst). It’s worth noting that during the trials in Finland, a modified version was actually capable of firing 12 rounds per minute. The maximum range for its standard shells is some 30km and the ammo capacity carried is 60. The gun can be elevated to 65 degrees and depressed to -2.5 degrees.

The Panzerhaubitze 2000 is capable of simultaneous impact mode of fire (where multiple fired shells reach the target at the same time) and, apart from the standard NATO 155mm shells, can also fire:

The firing itself is controlled by the MICMOS-32 FCS or by the ADLER artillery computer network. 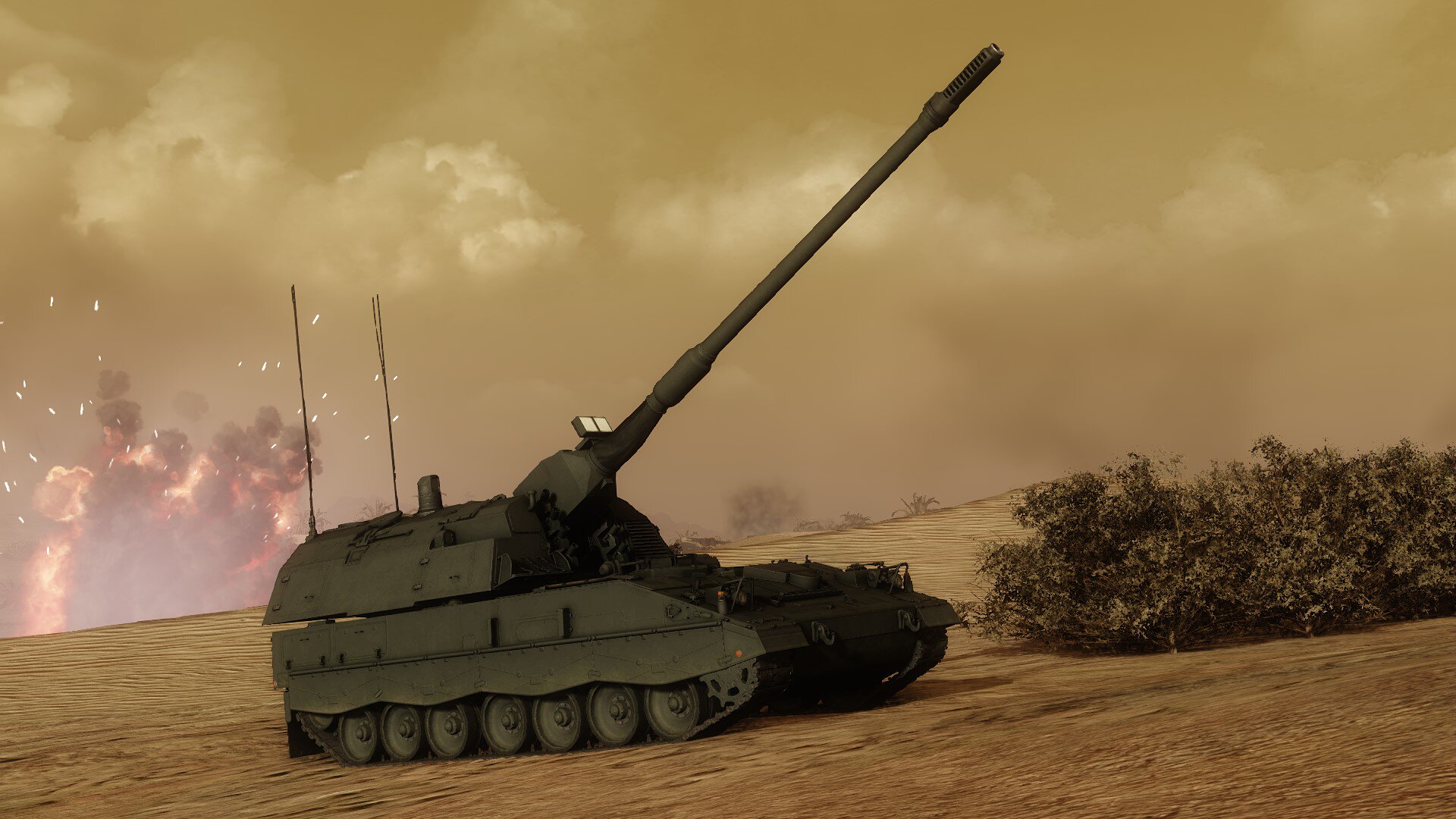 The vehicle is powered by a 1000hp MTU 881 Ka500 1000hp diesel engine with a Renk HSWL 284C transmission, allowing it to go as fast as 67 km/h. It also has excellent off-road properties (up to 45 km/h off-road speed), making it very suitable for the theaters of war that do not have advanced infrastructure.

The production started in 1997 and the first production vehicle was delivered in the early 1998 to the Panzerartillerielehrbataillon 345 unit in Kusel with the production structure changing in 1999 because Krauss-Maffei and Wegmann merged into Krauss-Maffei Wegmann (KMW). This company became the new primary contractor.

Germany received the original order of 185 vehicles between 1998 and 2002. Interestingly enough, the vehicle gained a significant popularity, which led to a number of them being exported.

Greece was the first country to make an order for 24 in 2001. These Panzerhaubitze 2000HEL vehicles were delivered between 2003 and 2004. Compared to the German type, they had additional night vision equipment for the driver as well as a new, digital radio system.

Italy ordered 70 vehicles in 2002, which have been delivered between 2004 and 2008. The first two were built in Germany, while the other 68 were already license-produced in Italy by a consortium consisting of Iveco, Fiat and OTO Melara. The Netherlands too initially ordered 57 in 2002 with the Panzerhaubitze winning the contract over the British AS90, the American M109A6 Paladin and the South-African Denel G6. The contract was, however, later reduced to only 39 vehicles. The sale of 24 vehicles was also approved to Qatar in 2009.

In the meanwhile, however, mostly due to their high operational costs, the Bundeswehr decided to reduce the number of its PzH 2000 vehicles from 185 to 149. The remaining vehicles were sold off to Croatia (15 ordered in 2014 along with a simulator) and Lithuania (21 ordered in 2015). As for the Bundeswehr, two upgrade variants were produced:

The Panzerhaubitze 2000 has already also seen combat in Afghanistan. The most famous deployment was the use of Dutch PzH 2000s in Operation Medusa and the 2006 battle of Chora. In both occasions, the crews praised its high accuracy, but noted a number of issues connected to heat and the amount of dust in the region – the NBC system was, for example, intended for Europe and struggled badly with the ever-present dust while the gun accuracy was negatively affected by heat. The German units also had three Panzerhaubitze 2000 SPGs available since 2010, occasionally providing fire support to German troops. These were withdrawn around 2013. 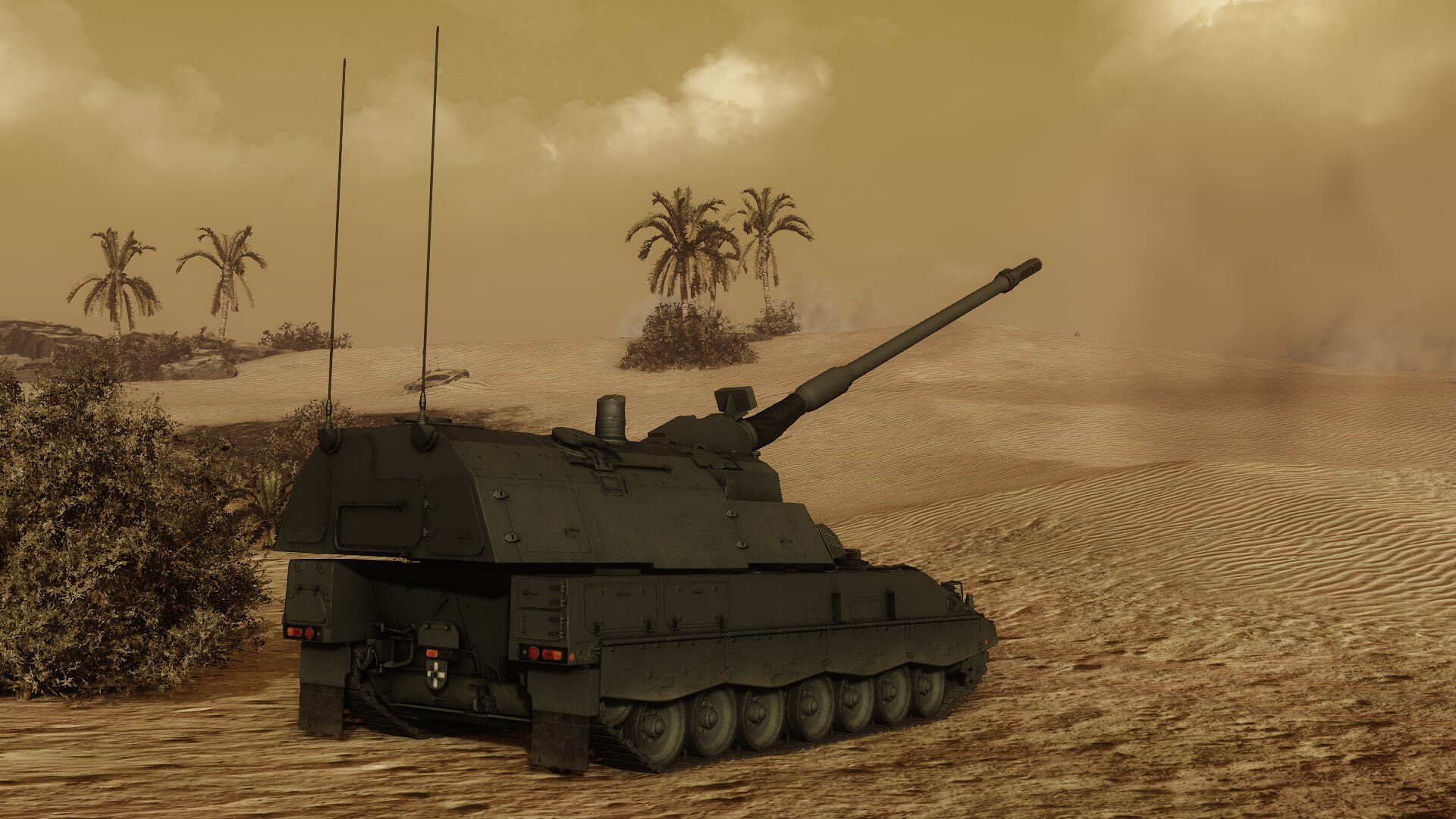 In Armored Warfare, the Panzerhaubitze 2000 is a Tier 9 Self-Propelled Gun, available (since the introduction of Balance 2.0) in Zhang Feng’s artillery branch. Like all other vehicles of this class, it is currently only available in PvE.

It can be classified as a rapid-fire self-propelled gun. Rapid-fire SPGs, as the category suggests, fire shells faster than standard SPGs, but with less accuracy. They can fire in salvos – similar to the “clip” system of some autocannons in the game, these have a magazine of several rounds (typically three) that can be fired in quick succession, followed by a longer “magazine” reload time.

The Panzerhaubitze 2000 is, without a doubt, one of the most effective SPGs in the game and is capable of excellent fire support under most circumstances.