The Leopard 2 is without a doubt the most important late Cold War European tank and, along with the American Abrams, forms the backbone of NATO armored forces to this day. Much like the Abrams, it was born in the late 1960s and early 1970s as a result of the ambitious, but ultimately unsuccessful MBT-70/Kampfpanzer 70 American and German joint development program for a future Main Battle Tank for western armies. 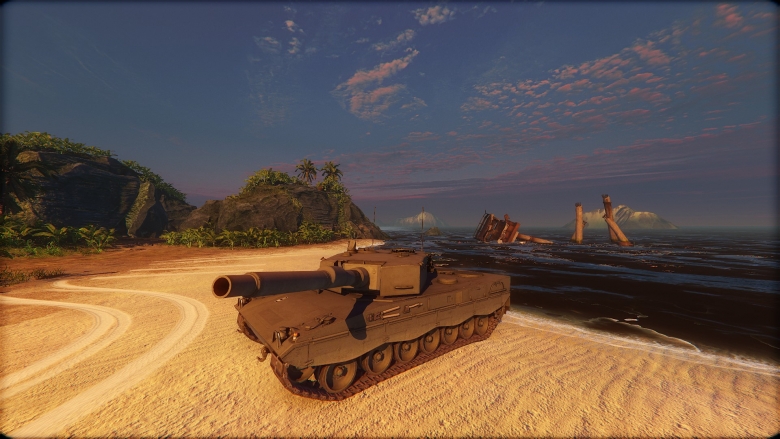 When the program began to have issues, it became more and more obvious that the vehicle would not only be significantly delayed, but also that it would be extremely expensive and excessively heavy. On the German side, the program was stopped in January 1970 after seven years of development with the cost reaching 830 million DM. The Americans would continue developing the concept further, resulting in the XM803 prototype, before finally cancelling their part of the project in favor of the Abrams.

Germany also sought an alternative and upgraded the Leopard 1 (which entered service in 1965) to the levels required by the Kpz-70 program, using the components developed in the program. The first steps towards this were taken as early as 1965, immediately after the Leopard 1 entered service, in the form of a program called Vergoldeter Leopard (Gilded Leopard). 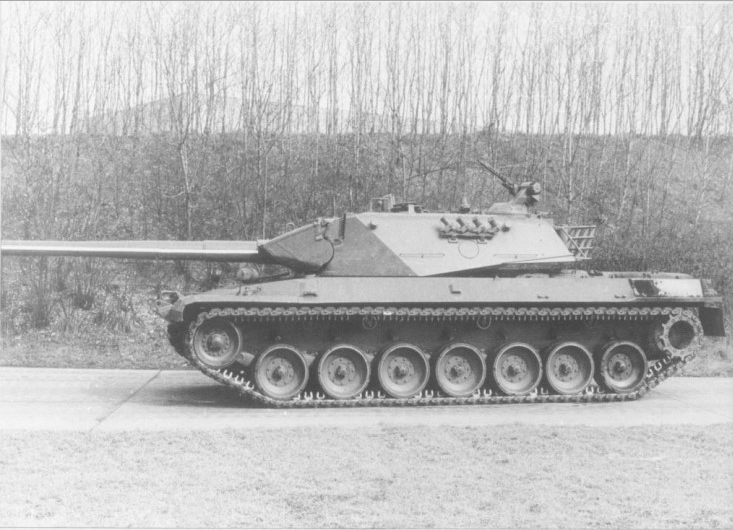 One of the prototypes belonging to the Gilded Leopard program

In parallel, the German government began a development project that was independent from the USA called Experimentalentwicklung (experimental development). Its main objective was to test various technologies of the Kampfpanzer 70 in a different technical environment, similar to the Gilded Leopard. Two vehicles were eventually built and tested, but they were never intended to be fielded or developed into a full tank.

The knowledge gained from the Experimentalentwicklung was used to develop and build the first generation of 16 prototypes of the Leopard 2 (16 hulls and 17 turrets). These prototypes were built by Krauss-Maffei AG, once again selected as the main contractor between 1972 and 1974. They had different engines, suspensions and weapon system configurations, consisting of either 105mm or 120mm guns. The 105mm caliber was tested in both rifled and smoothbore variants, while the 120mm guns were all smoothbore. 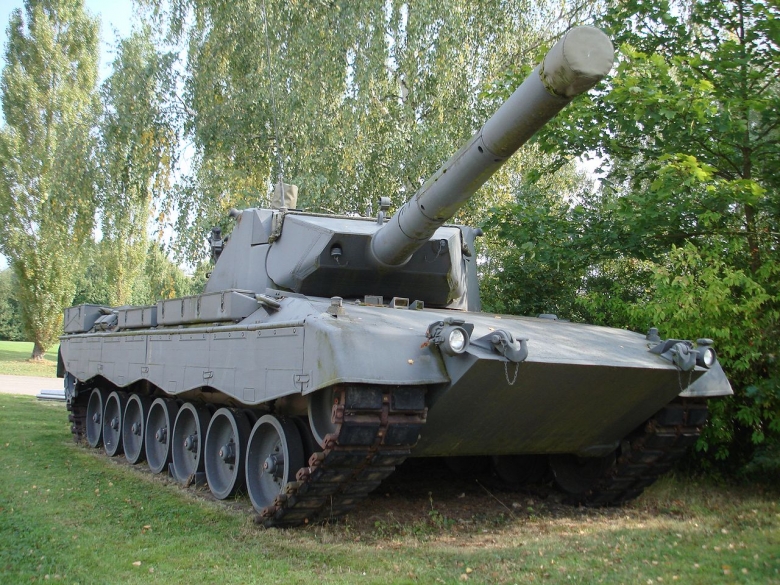 The vehicles struggled at first to meet the Bundeswehr weight requirements, which were later on lifted based on the Yom Kippur war analysis. This analysis proved that thick armor was more valuable than low weight and increased mobility on a Main Battle Tank. To meet the protection requirements, one of the turrets (number 14, aka PT 14 mod) was redesigned as an intermediate step, eventually resulting in what would later become known as the second generation prototypes, called Leopard 2AV. 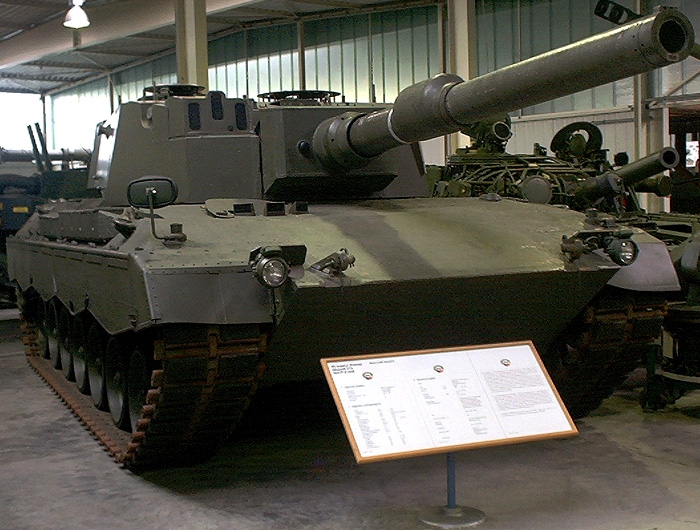 The Leopard 2AV (Austere Version, sometimes incorrectly written as American Version) was a Leopard 2 prototype, built for comparative trials in the United States with the XM1 prototypes. The groundwork for it was laid on December 11 1974, when a Memorandum of Understanding was signed between Germany and the United States regarding armor development in the 1980s. By then, the Americans had already purchased one Leopard 2 prototype (number 7), but it was not possible to simply modify it to meet American demands for a U.S. MBT, which the United States shared with Germany and the other 17 prototypes were already in production. Interestingly enough, a number of technologies and ideas from the prototype 7 Leopard 2 were copied in the XM1 development, much to the dismay of Krauss-Maffei.

Two hulls (number 19 and 20) and three turrets (number 19, 20 and 21) were built in 1976, all using mild steel instead of armored steel. The Leopard 2AV had two main new features compared to the earlier prototypes:

Both features considerably increased the protection level of the vehicle. The vehicle with turret and hull number 19 (furthermore referred to as Prototype 19) was equipped with an American fire control system by Hughes and a (originally British) Royal Ordnance L7A3 105mm cannon because the XM1 prototypes were armed with the same weapon. 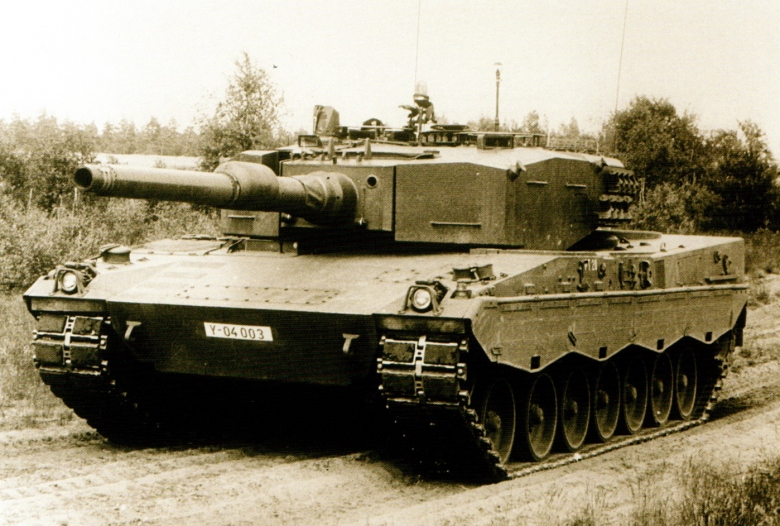 The XM1 prototypes were not tested head to head with the Leopard 2AV – the 2AV production took longer than expected and the Americans didn't want to wait. Prototype 19 along with turret number 20 only got to the United States in August 1976. The tests were conducted on the Aberdeen Proving Grounds in Maryland and lasted until December.

The result was that while mobility and firepower were comparable, the XM1 was better protected than the Leopard 2AV. The XM1 was declared the winner after combining the trial results, despite the fact that the Leopard 2AV completed more individual test criteria. Germany contested the results, but to no avail. The ultimate goal of the earlier memorandum – to agree on a number of components the vehicles of both sides would share – failed almost completely.

After the tests, Prototype 19 was disassembled – hull number 19 and turret number 20 returned to Germany, while turret number 19 stayed in the United States, where it was modified to carry the 120mm Rheinmetall smoothbore gun and tested further. Eventually it returned to Germany as well, where it was modified with a new fire control system and the 120mm smoothbore. 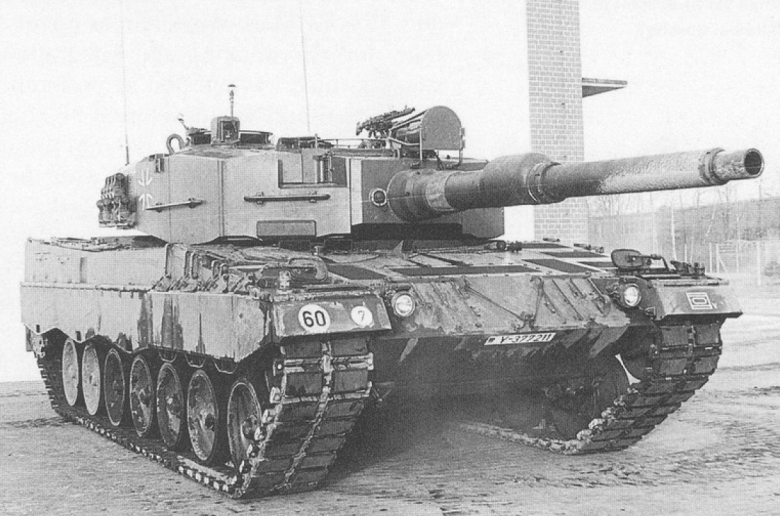 One of the first production Leopard 2s, delivered to tank school in Munster

Following these tests, Germany decided to go with the 120mm smoothbore along with the new EMES 15 fire control system (developed in cooperation by Hughes and Krupp Atlas Elektronik) and approved the first mass production run of 1800 Leopard 2s in September 1977. The first test run vehicle was delivered on October 11 1978 with Bundeswehr officially receiving its first Leopard 2 MBT (fourth built) on October 25 1979.

The United States decided to "save" the 120mm smoothbore for later M1 variants. It eventually became the standard armament of the Abrams series from the M1A1 variant from 1985 onwards under the designation of M256.

In Armored Warfare, the Leopard 2AV is a Tier 6 MBT, available to unlock from its predecessor, the Leopard 1A5, in Sophie Wölfli's Leopard variant branch. For its tier, its frontal armor is very tough and the turret front especially is almost impervious to armor piercing rounds. The hull sides are considerably weaker and should be protected as much as possible. The turret side is thick enough to withstand the majority of incoming fire if its boxy shape is angled properly. It's worth noting that, unlike composite armor vehicles, the Leopard 2AV turret actually has lower resistance to HEAT than to kinetic projectiles. 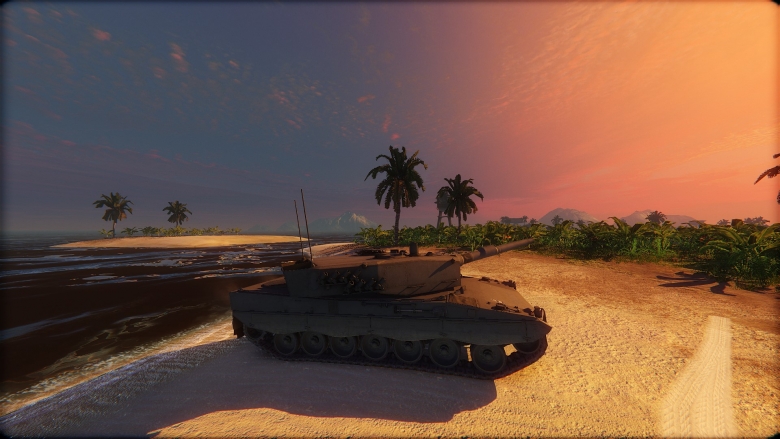 Mobility-wise, it accelerates faster than the XM1 and can reach a top speed of 68.4 km/h in 6.7 seconds. For a Main Battle Tank, it is an agile vehicle, allowing players to perform fast maneuvers and to defend themselves actively from marauding Light Tanks and AFVs. However, it is a Main Battle Tank and lighter vehicles will likely outmaneuver careless players in a close quarter battle.

The firepower of the Leopard 2AV is standard for its tier – the 105mm L7A3 gun can also be found on the XM1. It is a fairly accurate cannon with excellent gun depression of -10 degrees. Using this feature, players can set up ambushes in rough terrain without having to expose their vulnerable hull too much.
The Leopard 2AV can excel in many roles and is suitable for a large scale of playstyles. Its only serious weakness is the thin side hull armor. Playing carefully against higher tier vehicles without too much hull exposure will yield excellent results.

Vehicles in Focus: Leopard 2A5