The Leopard 1 Main Battle Tank was the first German tank to be developed and fielded after the end of the Second World War and one of the most iconic NATO vehicles of the Cold War. Designed to replace the aging American M47 in German service, it traded armor for mobility and firepower. 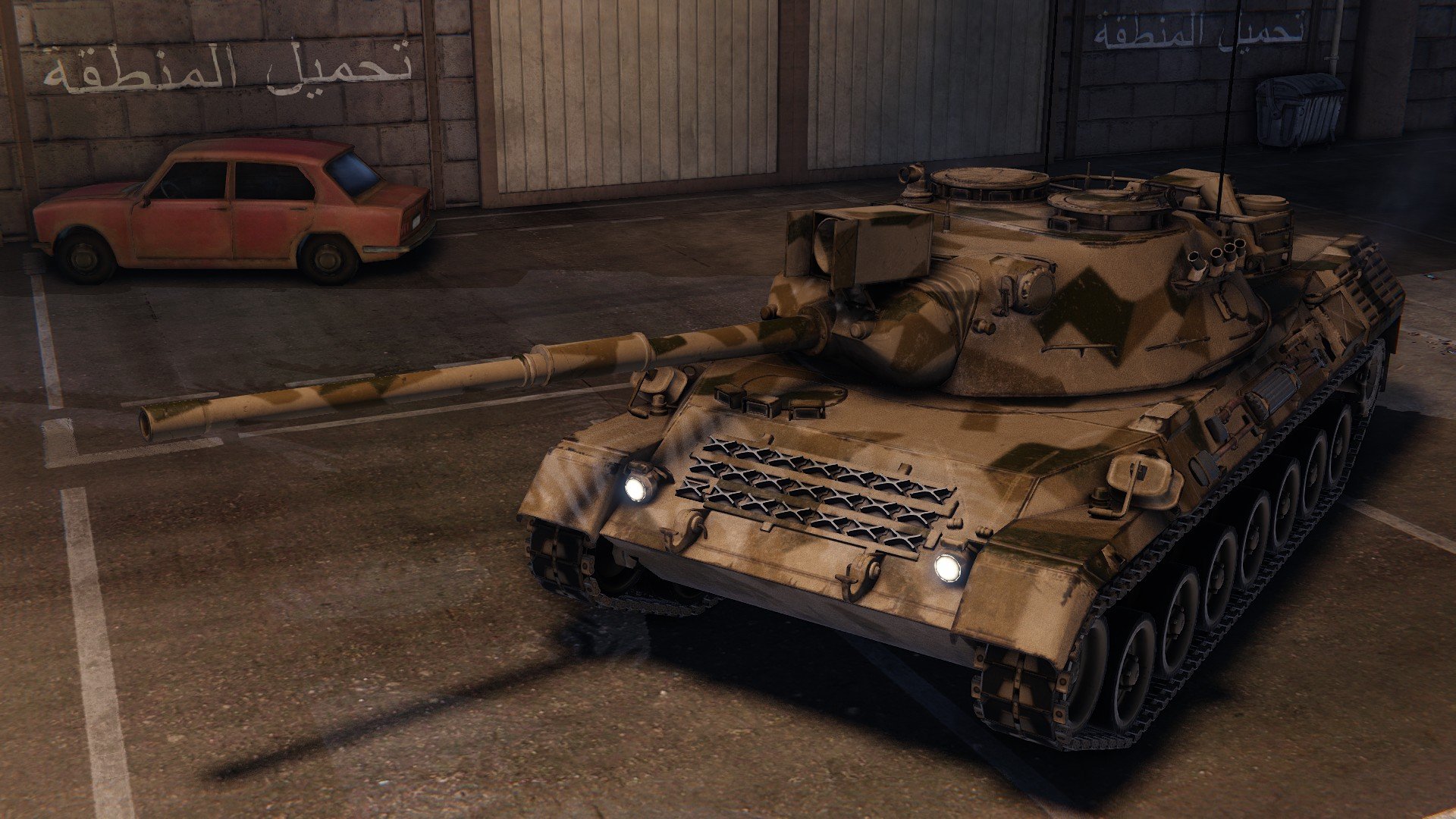 The whole story started ten years after the war, in 1956, when the Bundeswehr (back then, the West-German army) was looking at the requirements for its future, modern Main Battle Tank. Apart from some rather strange ideas (like re-starting an upgraded Panther production), the obvious choice for the future was the existing American M47 that was immediately available for export.

The problem with the M47 was that it was basically a Second World War tank with an obsolete gun. The Germans weren’t blind to the fact that the Americans were considering the M47 to be basically just a stopgap measure for the Korean War and were developing its successor as fast as they could. The Germans eventually fielded the M47 (with some 1.120 tanks making it to West Germany) but, at the same time, they too would work in its indigenous successor.

Ironically, the experience from the Second World War played a major role in the German decisions and requirements. Gone were the days of producing larger and larger steel behemoths – the way the Germany saw it, light and mobile tanks were the right solution for the future. After all, no amount of steel would be able to withstand modern HEAT rounds anyway.

The initial 1957 requirements were therefore limited to 30 tons of weight, enough armor to protect the crew from 20mm autocannons. Back then, 30mm Soviet autocannons on armored vehicles weren’t really a thing and the 20mm autocannon protection requirement was deemed enough for the Soviet 14.5mm heavy machinegun caliber. Another requirement was a powerful gun that would be capable of penetrating 150mm of armor sloped at 30 degrees. The tank was also to have the power-to-weight ratio of 30 hp/t, calling for a 900hp engine, and a NBC protection system.

There was another aspect to the entire future German MBT deal. The German industrial might could, after all, be put to work to design a tank for the whole NATO, thus reducing the dependency on American equipment. The French shared such an idea, of course, and for the first time after the war, both countries did put their heads together in 1957 in an effort to launch a joint project (referred to as Standartpanzer – a standard tank) with the participation of both sides. Italy joined a year later. The cooperation went about as well as you might expect, but that is a story for another time. Today, we will focus on the German side of things.

The development started in 1958 and was split into three competing company groups:

Of the three, Group C was the weakest – Borgward alone had some rather very advanced ideas of how the future tank should look like (to the point of being outlandish) but could not really bear the massive development costs – the company folded and the Borgward tank development was cancelled in 1961, its drawings disappearing for four decades. 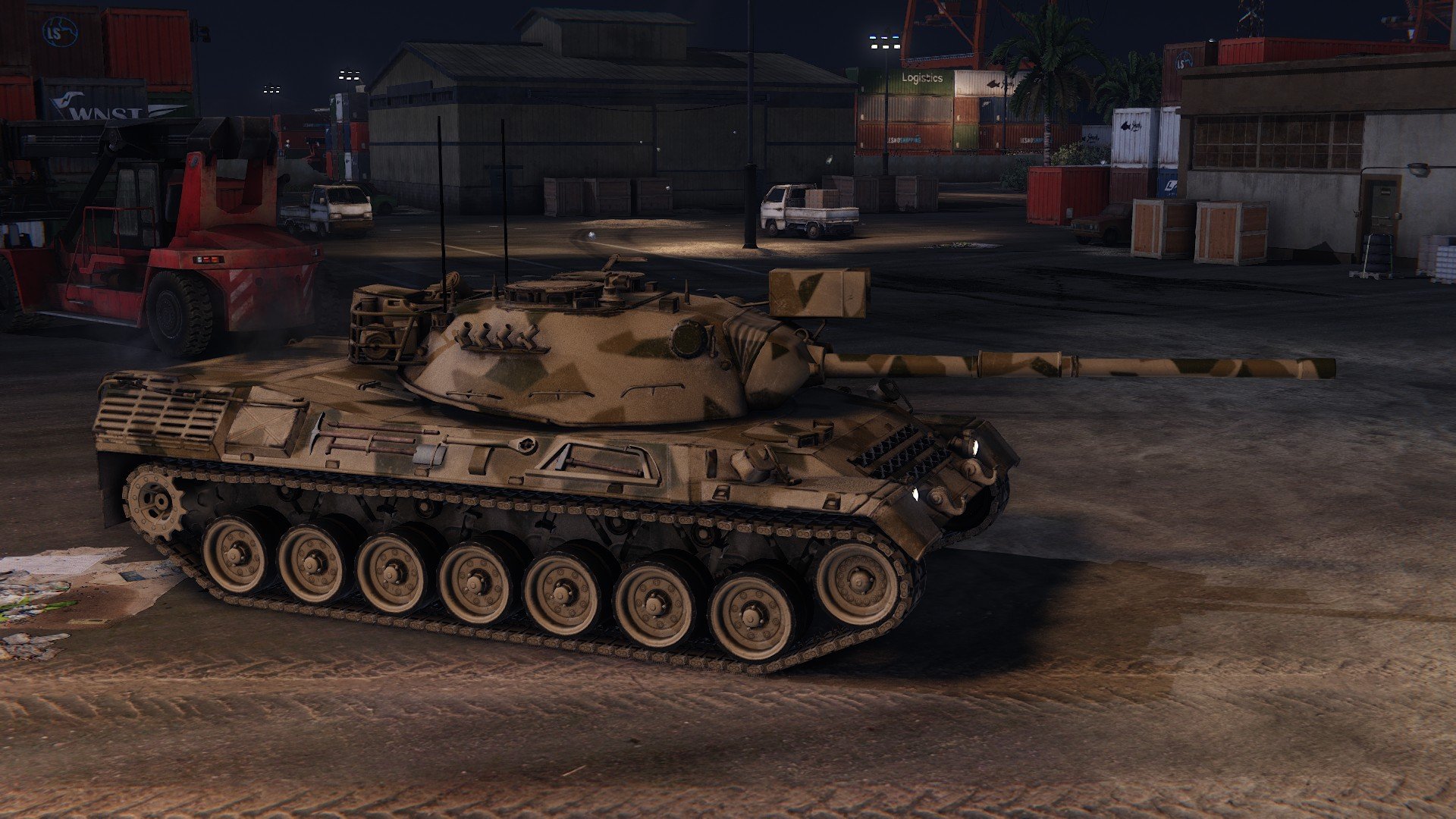 The turret for both remaining groups was to be developed by the Wegmann and Rheinmetall companies and both of them were given the contract and the funding to build a first generation prototype on May 6, 1959.

The first wooden mock-ups were ready in 1959 and four prototypes (two per Group) were ordered. Group A was the first to deliver them in January 1961. These prototypes weighed 35 tons (the previous 30 ton requirement turned out to be quite unrealistic), were powered by a Mercedes-Benz MB837A engine, had full-steel armor and were armed with a modified German version of the British 105mm L7 gun.

The very early project armament of a 90mm rifled gun was quickly discarded as insufficient and the indigenous German Rheinmetall 105mm gun project was delayed while the British guns were readily available along with all kinds of ammunition (including HEAT and HESH), so why re-invent the wheel, the Germans thought, and ordered 1500 of them right away. These guns were modified by having a sloped gun breech in order to allow the gun to depress in its mount to the required -9 degrees. This variant of the gun was referred to a L7A3.

In the meanwhile, the Group B prototypes were somewhat delayed until September 1961 due to the problems with the development of a new Hanomag engine and a hydro-pneumatic adjustable suspension. These advanced components – especially the suspension – made the B prototypes very complex and, unfortunately, also very expensive, leading to the selection of the Group A prototypes after the comparative trials that took place in April 1962. Much like Borgward a year before it, the Ruhrstahl group was unable to continue the development of the tank on its own without further Ministry of Defense funding and dropped out of the race.

The development of the first second-generation Group A prototype (also referred to as Porsche Type 773) actually started quite early, two years before Group B dropped out. This tank had a number of improvements over the first generation prototype, including:

The tank was also slightly heavier at 36 tons but retained an excellent mobility. This prototype was tested in the autumn of 1962 by a training unit attached to the military school in Munster with positive results, although some changes were required by this testing, such as replacing the old ranging machinegun system with a coincidence rangefinder. Regardless, the Germans were impressed and the Ministry of Defense ordered the first 50 pre-production (“zero-series”) tanks (still referred to as Standartpanzer, or Porsche Type 814). The first of these tanks was ready in June 1963 and what followed was a long series of mobility and firing trials, crowned by a comparative trial between the German vehicle and the French version of the “standard tank”, the pre-production AMX-30, where the German tank excelled: even though it was six tons heavier (the weight grew to 39 tons), it was also roughly 10 percent faster and accelerated 18 percent better compared to the AMX-30. 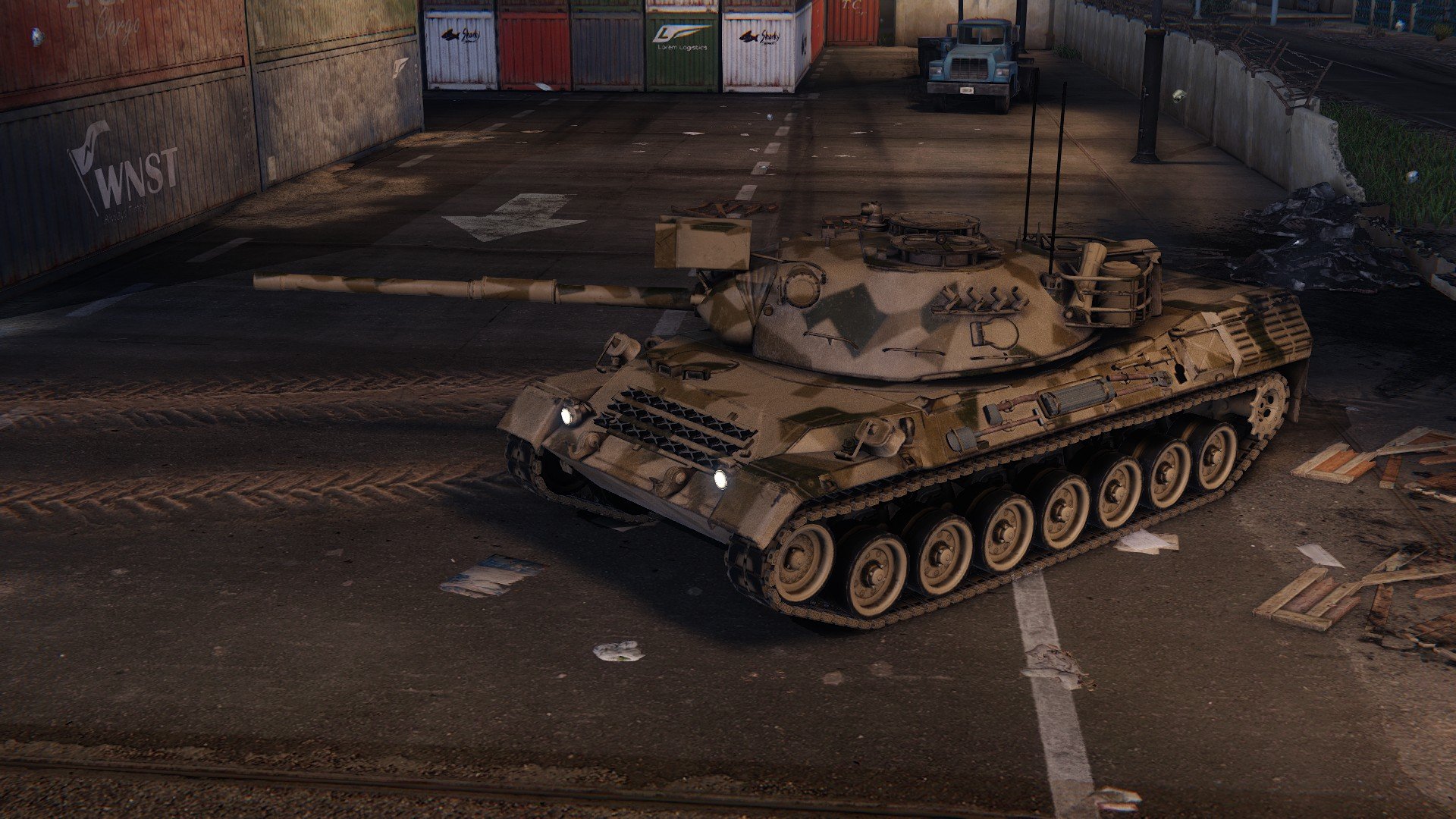 As a tank, the German vehicle was clearly superior but – what a coincidence – due to administrative issues (or “change in the defense strategy”, as they called it), the French were suddenly unable to muster any more funds for building of the new standard tank before 1965, even though they were fully aware the Germans were desperate to replace their completely obsolete M47s. As a result of these “unfortunate circumstances”, the Germans and the French agreed to part ways and do their own thing.

On October 4, 1963, the German standard tank received its official name: Leopard (the tank was renamed to Leopard 1 after the appearance of Leopard 2). A full-scale production of 1.500 vehicles (later increased to 1845) was approved – the first mass-produced tank rolled off the Krauss-Maffei AG assembly line in Munich in 1965 (for a price per vehicle of 950.000 DM) and was formally received by the Bundeswehr on September 9, 1965.

The initial version of Leopard 1 was built between September 1965 and February 1970 in four batches:

The early variant of the Leopard 1 weighed 40 tons and had a crew of four. It had steel-only armor (welded hull, cast turret) of the following thicknesses:

The turret armor corresponded to the defense levels of the hull (approximately 60mm), effectively protecting the vehicle from autocannons only. The protection was, however, enhanced by two banks of four 76mm smoke grenade launchers each, an automatic Halon-based fire extinguishing system and an overpressure-based NBC filtering system.

The main armament is the 105mm L7A3 rifled cannon, capable of firing all standard 105mm NATO shells. The vehicle carried 60 rounds for this gun. The gun was not stabilized and was controlled by the TZF 1A sights with a TEM 1A coincidence rangefinder.

The production batches different from each other in small details (slightly different rear lights design and such) and were also exported. Belgium received, for example, 334 tanks from Batch 3 and Batch 4 between May 1968 and March 1971 and the Netherlands purchased 468 Batch 4-state Leopard 1s by the end of 1968 with the deliveries starting in October 1969. Norway purchased 78 tanks in 1968 as well and Italy ordered as many as 920 tanks to be delivered over the years. 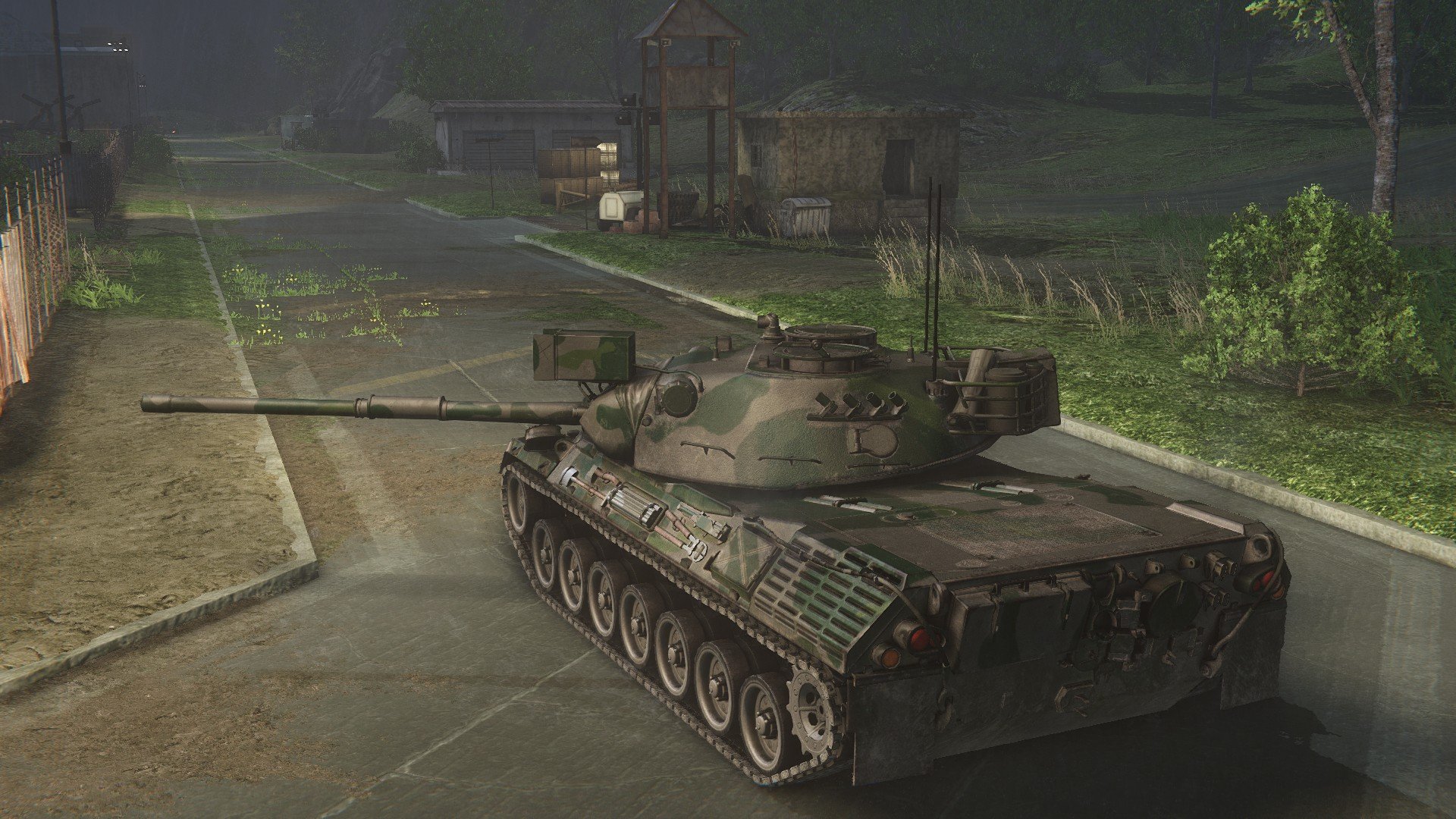 This demand drove the production for two more batches until March 1976, but those were upgraded versions already, described in a dedicated article. Overall, the Leopard 1 was one of the most successful German armor designs that gained a lot of customers both inside NATO and outside of it. It is (upgraded, of course), still in service in several countries and will likely be for years to come.

In Armored Warfare, the Leopard 1 Tier 3 progression Main Battle Tank is a perfect introduction to the German sniper-style. Generally speaking, the German MBTs are the polar opposite of the Soviet vehicles. They are the snipers of the MBT class, perfectly suited for defensive warfare but outmatched at close range by their opponents. They are the most accurate MBTs of Armored Warfare and their tactic of choice should always be to keep their enemies as far from them as possible.

They consist of two distinctive vehicle families – the Leopard 1 series and the Leopard 2 series. The Leopard 1 tanks are fast but extremely fragile tanks with poor steel armor and few defensive measures. They are amongst the most fragile MBTs in the game, but their agility and speed puts them closer to the Light Tank class. They require some careful gameplay to make them effective.

Like the Americans, the German guns are manually loaded (in real life, the Germans consider automatic loaders to be too unreliable) and they have four crewmembers, giving them access to more crew skills and – when fully trained – to solid rate of fire.

The German tanks are ideal for you if you prefer to snipe but also want to keep some armor without having to rely on stealth. If forced to advance, cover your hull, drive from cover to cover and use terrain to your advantage.