The CRAB is one of the most popular vehicles in Armored Warfare and, currently, one of the best scouts in the game. Developed by Panhard to replace the VBL AFV, its prototype was unveiled in 2014 along with its heavier sibling, the SPHINX, which will also appear in Armored Warfare, as a Tier 10 Armored Fighting Vehicle.

The CRAB is lightly armored but agile and packs quite a punch. Its role in Armored Warfare is to scout for its heavier teammates. While it cannot engage well-armored targets such as MBTs from the front, it can still knock them out when hitting their lightly armored sides or rear.

The CRAB's standard steel armor is 50mm thick on all sides of the hull and the turret armor is 80mm thick, regardless of turret upgrades. This doesn't allow the vehicle to resist much beyond very basic automatic cannon fire, but the CRAB's best protection is its speed and agility, not its armor thickness. 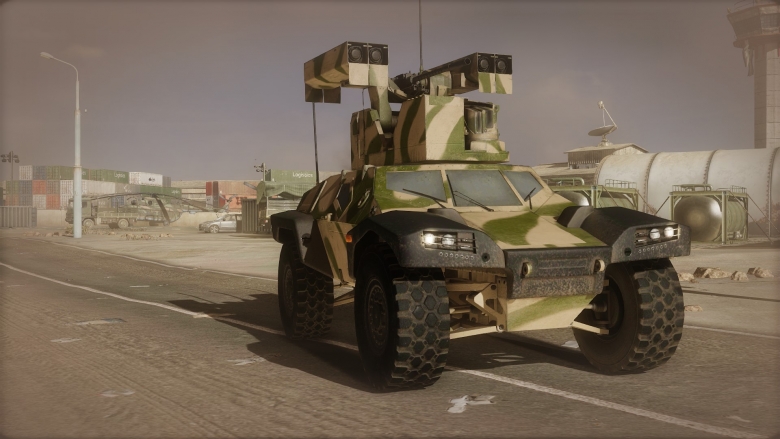 The vehicle's powerful M16 engine gives it phenomenal speed and agility and allows it to top out at 110 km/h and to accelerate from 0 to 32 km/h in 2.15 seconds. Mobility can be further enhanced with the following upgrades:

A fully upgraded CRAB is extremely agile and fast even on soft surfaces, such as sand or mud, and can easily outflank other vehicle classes. Mobility is the key to its primary use – scouting. Moving from cover to cover makes it very hard to spot.

While a member of perhaps the lightest class in the game (with the exception of Terminator class vehicles), the CRAB can also deliver quite a punch. CRAB drivers can choose one of three armament options:

The first two options (the stock and the upgraded automatic cannon) are well-suited for "brawling" – close combat with opponents attempting to flank each other to take a shot at their vulnerable areas. The CRAB's mobility makes it extremely effective when using this tactic.

The stock 25mm M242 automatic cannon can fire two types of APFSDS rounds and one type of HEI round. High Explosive Incendiary rounds behave like standard HE rounds, but with a better chance of setting an engine on fire when hitting it. 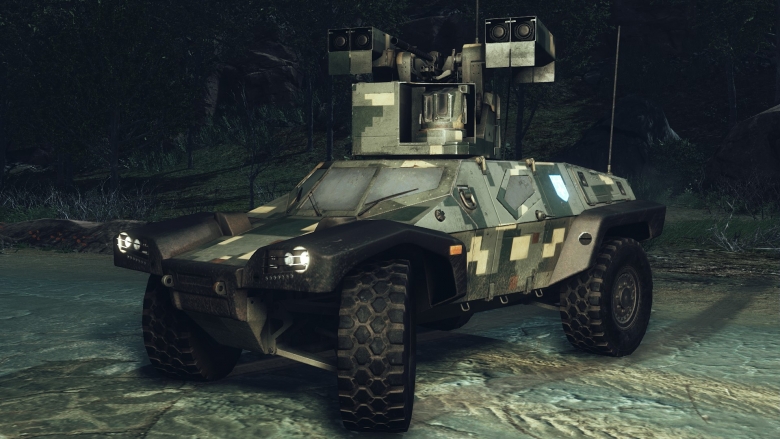 The last option foregoes standard barreled weaponry in favor of a quad MPCV missile launcher, capable of firing four HEAT warhead guided missiles in short succession. Unlike the previous two options, the missile launcher can only be fired while the vehicle is stationary, making it unsuitable for close combat. This weapon configuration can instead be used for long-range ambushes. However, the limited amount of missiles carried has to be used carefully because many vehicles are equipped with various protection measures that are specifically effective against guided missiles (ERA, APS, cage armor etc.). Hiding in cover, launching a salvo and changing position are recommended when using the ATGM option.

CRAB firepower can be further enhanced with a Firepower Retrofit slot.

The CRAB can be equipped with a wide variety of technology options to enhance its scouting duties. These include:

On top of that, the CRAB has a Universal Retrofit slot available – unlike the Firepower slot and the Mobility slots, this does not have to be unlocked and is available right from the start.

The CRAB is the perfect vehicle for players who enjoy staying hidden and ambushing their opponents, or for those who use its blazing speed to circle slower targets. It is one of the best scouts in the game and until the arrival of the Tier 10 SPHINX, it will remain the most powerful recon vehicle available.

Learn about the newest addition to the Armored Warfare British tank family – the Chieftain Mk.6