The evolution and the service life of the Chieftain MBT were both relatively long, especially for a tank that, in its basic form, did not use composite armor or a smoothbore gun. The British stuck to their guns – in a sense quite literally since they are using a 120mm rifled cannon to this day. But by 1969 when the Chieftain Mk.2 replacement, the Mk.3, appeared, they still had a long way to go until the appearance of the ultimate mass-produced variant. 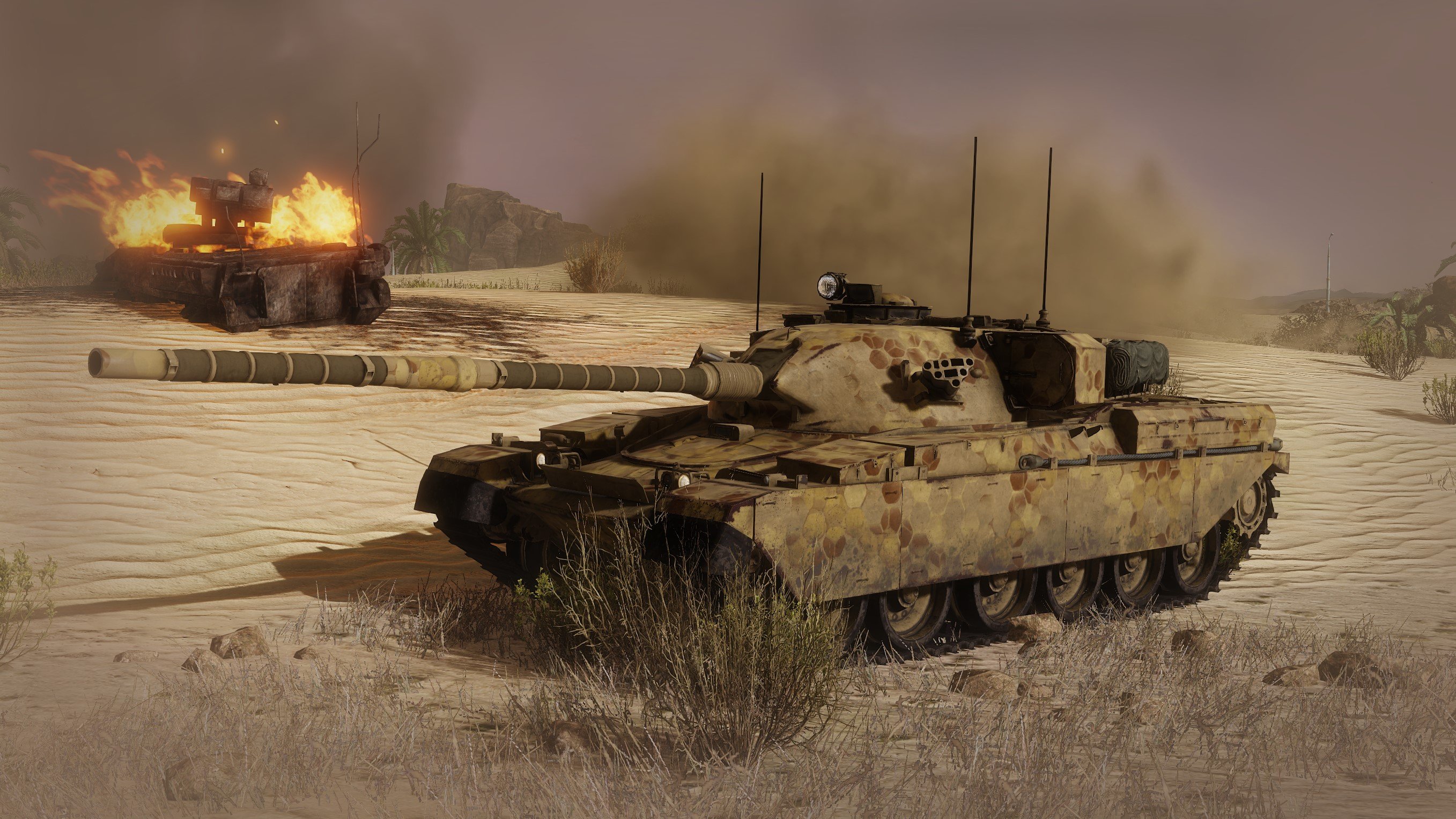 The Mk.3 model featured, amongst other things, a more powerful engine – or, more specifically, a version of the original Leyland L60 multi-fuel engine, tuned to produce more horsepower. This tuning, however, came at a steep price in the form of lower reliability. The tank was generally underpowered even before, straining the L60 beyond its limits, and the Mk.3 power increase, combined with the tank actually becoming heavier (some 53 tons) did nothing to improve the situation. The engine issues included:

These problems were given considerable publicity and attention, including a dedicated sub-committee of the House of Commons and resulted in a series of engine improvements and upgrades that were a part of a program called Totem Pole (or Exercise Totem Pole).

The entire program was rather convoluted and was actually split into three parts: X, Y and Z. Part X dealt with the new improved sighting system, part Y dealt with some improved automotive characteristics and commander’s control system (the commander was now able to fire the main gun for example) and part Z included improvements to the engine and gearbox. For the purposes of this article, we’ll simplify things a lot and say that the program resulted, amongst other things, with the unification of the Mk.2 and Mk.3 tanks with the most common and heavily mass-produced variant of them all, the Chieftain Mk.5.

The first Mk.5 tanks were produced in 1972. Interestingly enough, the next mass-produced variant following the Mk.3 was not called Mk.4 – that designation was reserved for two modified Mk.2s with improvements based on the Israeli feedback that were built before the approval to sell the Chieftain to Israel was cancelled in December 1969 – these vehicles were then used for various tests, including in the United States.

The Mk.5 model also featured some improvements based on the Israeli tests of the late 1960s. Ironically enough, while the British denied Israel the right to purchase these MBTs, they were more than happy to offer the vehicles with the Israeli improvements to Israel’s enemies, Iran and Libya in order to preserve their influence in the area. 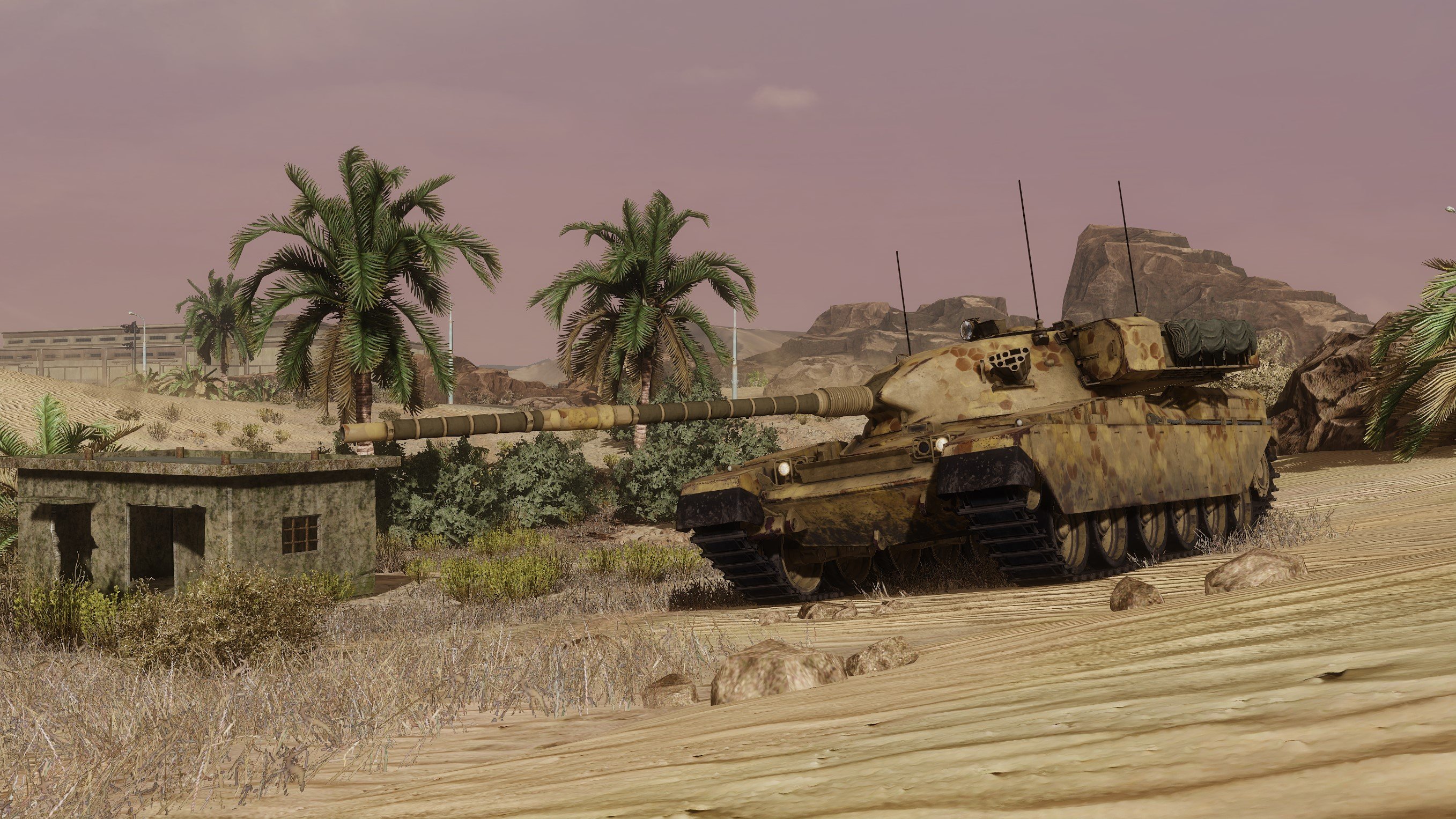 The Mk.5 became the most-produced baseline Chieftain the older models were improved to match and the newer models were generally built upon. It featured a whole range of improvements – especially automotive ones, such as:

And several smaller upgrades, allowing the, now even heavier, vehicle (its weight increased to 54 tons) to keep its maximum speed of roughly 42 km/h.

The tank weighed 54-55 tons (varies depending on sub-variants) and its armor was still made of steel. The actual armor thickness and protection levels of a Chieftain are actually not quite public. A number of estimates exist on the internet as well as in various books but the actual thicknesses are generally only mentioned in restricted or privately-owned documents. As such, the armor of the Chieftain officially remains a mystery. Swedish archive sources from the 1960s give estimates about the effective armor value being from 183mm to 366mm in certain areas. A German military analysis of the armour of an early Chieftain puts the effective value at 262mm.

Regardless, it was sufficient for its time, as was its firepower. The L11A5 120mm rifled gun still packed quite a punch, especially with its new, improved ammunition. The gun was equipped with a thermal sleeve, was fully stabilized. The vehicle carried 64 rounds of ammunition. Other improvements included:

The production ran from March, 1972 and, throughout the run, there was a whole series of sub-variants (such as the Mk.5/3 with a new and improved fire control system). From the Mk.5/5 variant onwards the gun could fire new extremely powerful APFSDS shots as well.

The Mk.5 was also exported – a modified version called Shir with a 1200hp Condor CV-12TCA engine was sold to Iran (Iran bought a total of 707 Chieftains of various versions) and in 1976 Kuwait bought 165 Mk.5/2 Chieftains. Some leftover Shirs from the Iran program (some were not delivered due to the Iranian revolution) were delivered to Jordan in 1979 (274 in total). These had 1200hp Condor engines, new TN-37 transmissions and Marconi fire control systems – they were also a bit longer. The Jordanians named this variant Khalid and used it from 1981. The last foreign Chieftain user was Oman with 27 Chieftains delivered in 1984-1985. 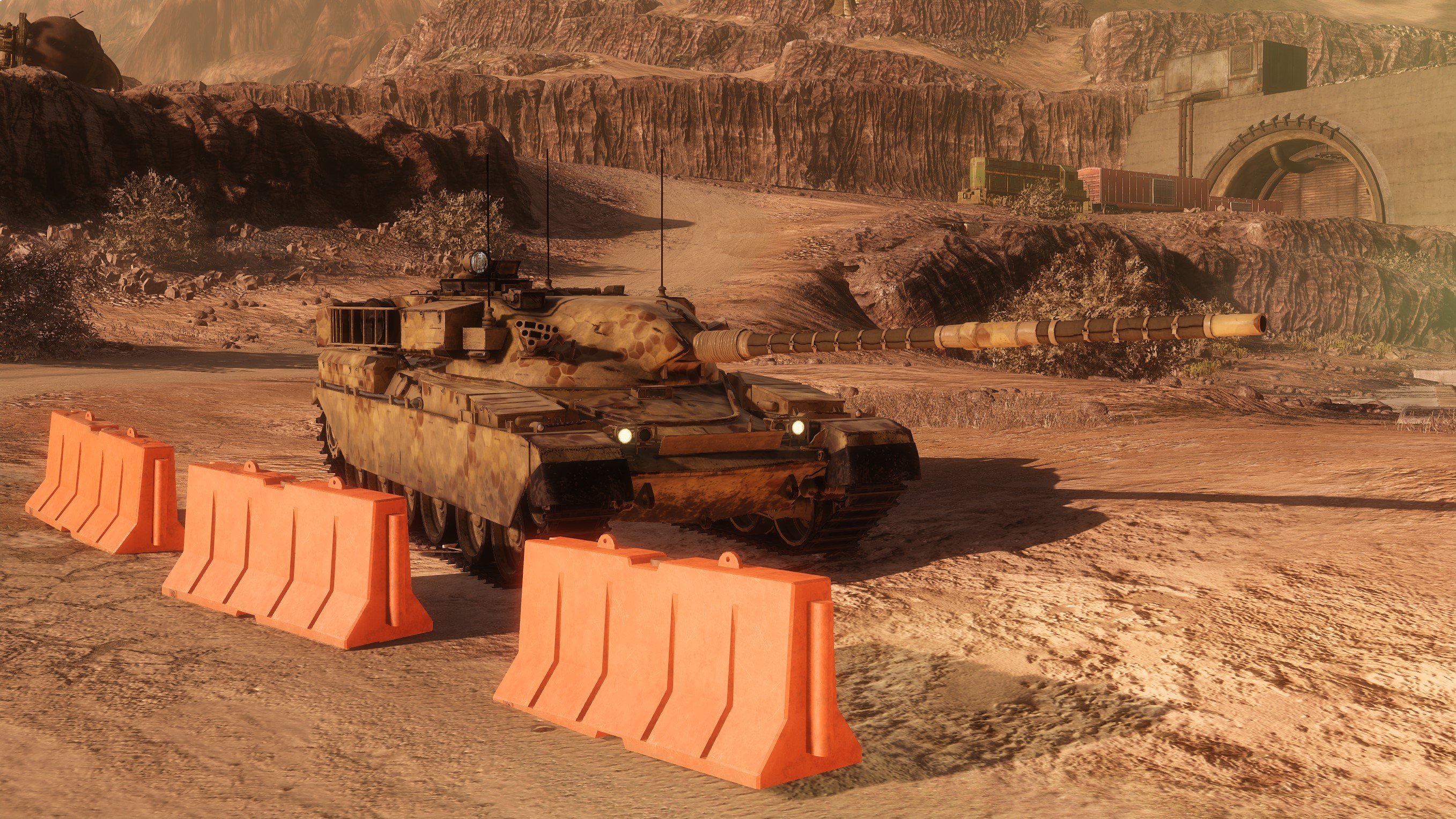 Although designed to fight the Soviets, the Chieftains luckily never fired a shot in anger in Europe. The first real combat use took place during the Iran-Iraq war but the results were unconvincing: the Iranian and Iraqi crews were both poorly trained and misused their vehicles. It was, however, discovered that the T-62 could under certain conditions penetrate the Chieftain armor. Around 50 Chieftains were captured by Iraq and later given by Saddam Hussein to the Kingdom of Jordan as a gift – an unwelcome one as the Jordanians did their utmost to at least appear neutral in the conflict (and they had placed their own order for Chieftains). In the end these "gifts" were used for spare parts for the Jordanian Khalid version. The last combat use of the Chieftains was likely the Kuwait defense against the Iraqi T-72 tanks during the 1991 invasion. Sources are sketchy but apparently the Chieftains fared well against the Soviet vehicles and scored numerous hits at long range.

Back in Britain, the older Mk.2 and Mk.3 Chieftains were refitted gradually to match the Mk.5 standard, later the improved Mk.5 standard known as Mk.5/4 with enhanced ammunition stowage and, more importantly, a TLS laser rangefinder, a modified commander’s cupola and an improved FCS from the Mk.5/3. These modified vehicles were referred to as Mk.6, Mk.7, Mk.8 and Mk.9 Chieftains – they all had their own sub-variants with different upgrade stages and we will, once again, simplify a bit and skip straight to the Chieftain Mk.10, which was the first variant to introduce a certain very distinctive feature – the Stillbrew armor kit. 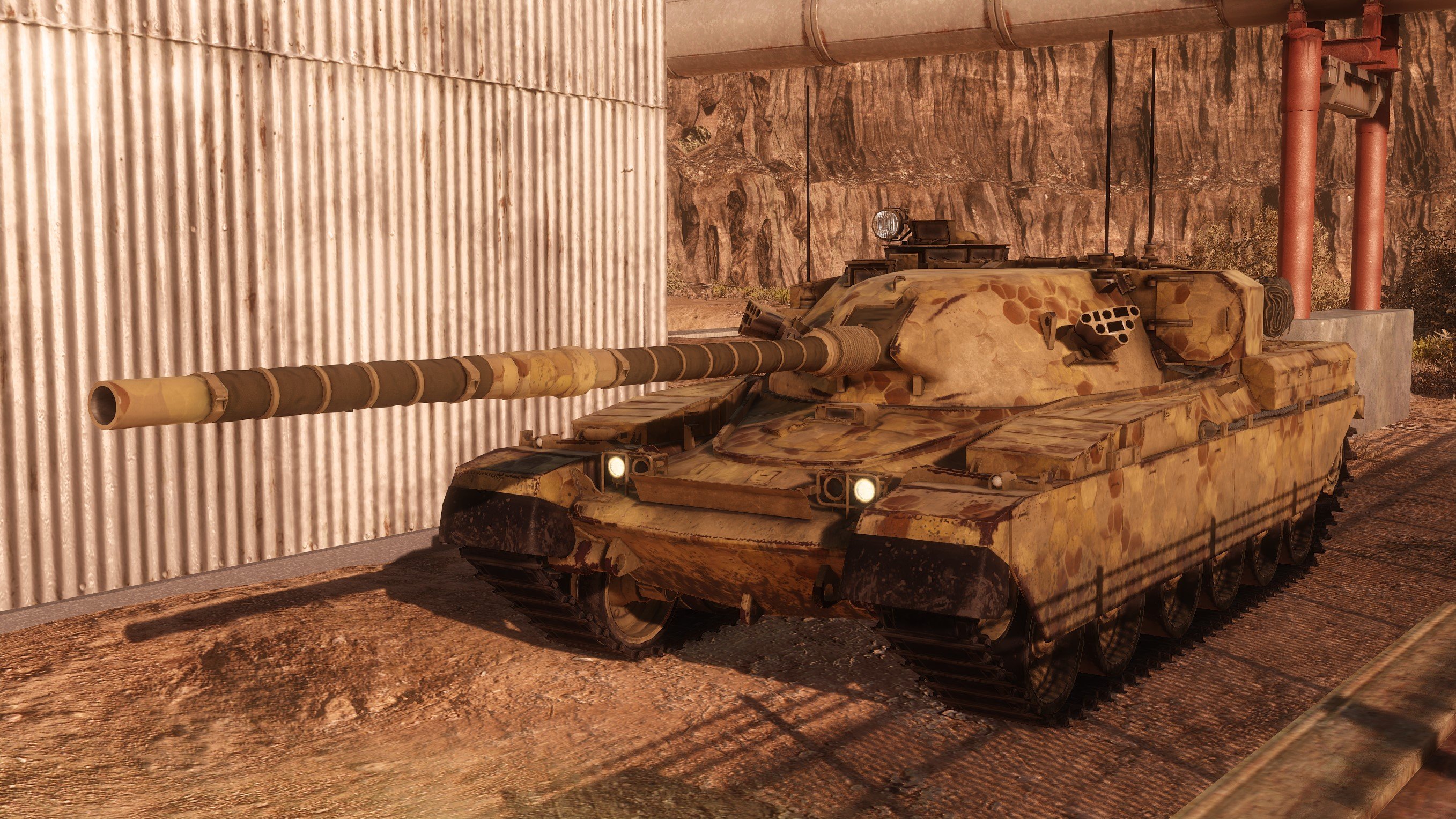 The Chieftain itself, despite all its previous improvements, was essentially a 1950s design with all the drawbacks that came with it. Its armor was designed to withstand Soviet 100mm sub-caliber kinetic rounds fired by a T-54 or a T-55, but would struggle against more advanced ammunition. In 2016, a British Ministry of Defense document was uncovered in archives where it is openly admitted that the Chieftain armor is vulnerable to 115mm tungsten rounds of the T-62 and to 125mm steel rounds of the T-72. That made its armor obsolete in the 1980s when it was still in service. This was also confirmed during the Iran-Iraq war where the Iranian Chieftains would be penetrated by T-62 shells.

Another problem was the proliferation of Soviet anti-tank guided missiles. The British paid close attention to the lessons of the 1973 Yom Kippur War where volleys of Malyutka ATGMs decimated the Israeli tank units armed with modified American Pattons and British Centurions. The solution for the Chieftain would therefore be to equip it with an add-on armor kit to the vehicle to significantly increase its protection levels, especially against HEAT-based weapons.

And that’s exactly what the Stillbrew armor was. Its development was started in the 1970s in Chertsey. The armor consisted of an additional steel plate with several rubber layers underneath it, separated by thinner plates of metal. It worked as non-explosive reactive armor – upon impact, the rubber would expand and the steel plate would be pushed against the projectile. At the same time, the rubber would mitigate the concussive force of high-explosive and HESH shells.

The program was a success and even though the official numbers are still classified, it seems that the kit was enough to provide the tank with enough protection to withstand Soviet 125mm tungsten kinetic rounds, estimated at 450mm of penetration. In other words, the kit increased the frontal protection of the vehicle by roughly 50 percent while keeping the weight increase low enough not to compromise the vehicle’s mobility. 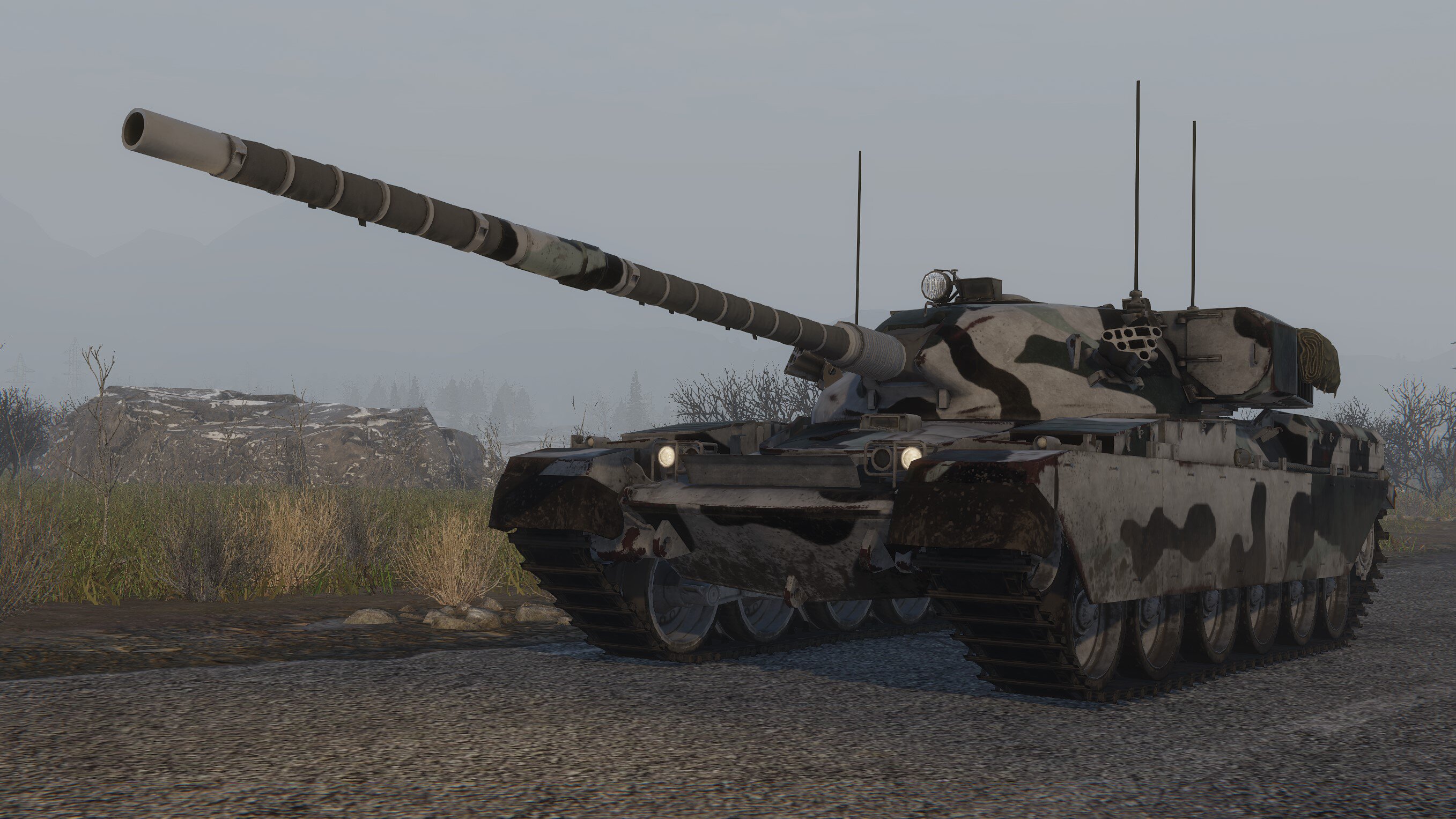 The first kits were built between 1984 and 1985 and in 1986 they were fitted to the Chieftains stationed in West Germany. Unlike the Mk.5 Chieftains, the Stillbrew Chieftains have never seen combat before being phased out of British service in 1995 – luckily for us, as such combat would have taken place in Europe.

In Armored Warfare, the Chieftain Mk.10 is a Tier 5 Main Battle Tank. Like its Mk.2 predecessor, it too emphasizes protection and firepower over mobility.

Despite the onset of various appliqué and ERA kits around that Tier, the British signature ammunition, the HESH shells, still make short work of many a lighter vehicle. The protection is, on the other hand, rather weak in its stock configuration and the armor only begins to truly work when upgraded to the Stillbrew level in this sense, the stock Mk.10 is essentially a Mk.5.

Like it was described in the Mk.2 article, the Chieftain works best when its thick turret armor is used in defense. Its mobility is, like in real life, relatively low. Especially the maximum speed is one of the lowest in Armored Warfare, making this tank unsuitable for fast, offensive operation. Methodical advance while keeping your hull in cover for as long as possible is the best way to operate any Chieftain.