The history of the Centauro program goes back to the late 80s and very early 90s, when the Italian military issued a request for a tank destroyer with firepower equal to the older Leopard 1 main battle tank (and its Italian derivate, the OF-40). Both vehicles carry advanced versions of the British Royal Ordnance 105mm L7 rifled cannon and it was that weapon caliber that was selected for the tank destroyer project.

Another important demand was increased mobility for the entire platform. Experiments and evaluations eventually led to the decision to make the tank destroyer a wheeled vehicle with a turret mounted 105mm rifled gun (105mm low-recoil OTO Melara). The vehicle eventually entered production and service in 1991 under the designation of B1 Centauro and to this day well over 500 vehicles based on the Centauro platform have been built (including the Freccia IFV). Most of them are serving with the Italian military, but some were exported to Spain (84), Jordan (141) and Oman (9). The Jordanian Centauro vehicles, however, come from Italian surplus.

There are (for now) four Centauro variants available in Armored Warfare:

The Centauro 155 (also called “Porcupine”, or Centauro 155/39LW) is a prototype self-propelled howitzer built on the Centauro chassis. As its name suggests, it’s armed with a lightweight FH-70 155mm L/39 gun, co-developed by Vickers, OTO Melara and Rheinmetall from the mid-1960s to the end of the 1970s as a unified future howitzer for the NATO forces. The development of this howitzer is an interesting story of its own, taking more than fifteen years with the United States (originally also a party of the program) splitting away due to disagreements and going their own way. The FH-70 (named after the year it was supposed to be fielded) eventually came into service in 1980.

The gun is automatically loaded and installed in an unmanned turret. Its maximum depression is -5 degrees, its maximum elevation is +75 degrees and it is, thanks to its advanced Fire Control System, capable of 4 round simultaneous impact fire (it can fire up to four rounds in the air in such trajectories that they all impact at the same time). Its standard rate of fire is around 8 rounds per minute and it fires all kinds of 155mm NATO standard rounds (weighing 40-50kg), including the VULCANO guided shell.

The maximum range is around 30 kilometers but it can be, using rocket-assisted ammunition, improved to up to 60 kilometers. Naturally, there are some limitations to the system as well compared to much larger SPGs equipped with the same caliber. It’s worth noting that, in real life, it takes three minutes for the vehicle to become ready to fire from full stop and the turret traverse is limited to 15 degrees to each side in order for the recoil not to cause unacceptable chassis stability loss. The vehicle also carries only 15 shells in total and relies heavily on ammunition carriers travelling with it – this limitation is, in fact, something intentionally introduced to the design and compensated by making it quite easy to reload the ammunition to the automatic feed – it takes the crew mere 10 minutes to fully reload the vehicle with ammo from outside, providing they are helped by the accompanying soldiers – after all, due to its unmanned turret nature, the Centauro 155 only has two crew members: the driver and the commander (who also targets the gun). The driver is sitting in the front while the commander is sitting under the turret, right next to an ammunition rack. They both have cutting edge electronics at their disposal (including the option to connect to a battlefield management system), making the Porcupine fully prepared for the 21st century combat. 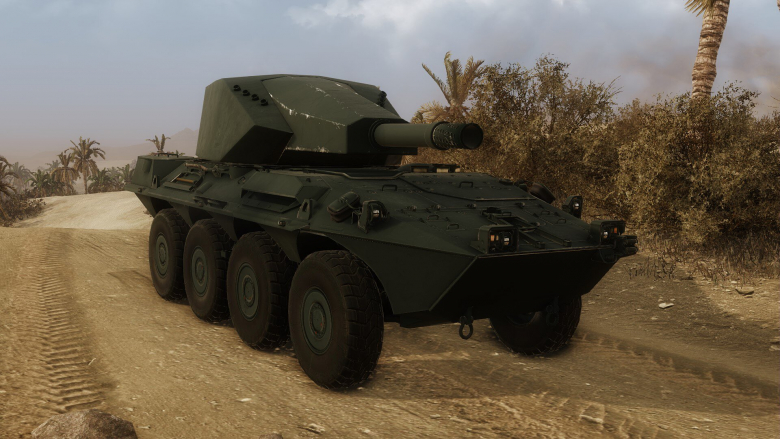 The vehicle only weighs 25 tons in total (much less than other self-propelled guns equipped with a comparable gun), making it quite mobile. It’s powered by a 520hp IVECO MTCA diesel, allowing it to go as fast as 100 km/h – the vehicle can easily keep up with the Centauro/Freccia IFVs (it’s worth noting that the B1 Centauro only weighs 1 ton less). It is also sufficiently agile thanks to its double-axle steering system – the first and second axles both steer the vehicle, improving its turning radius considerably.

The armor, however, is not very thick, resulting in only very limited protection levels – after all, the vehicle’s not supposed to find itself in direct combat. The unmanned turret is practically unprotected and the hull offers only limited protection against armor-piercing heavy machinegun bullets and (frontally) small autocannon rounds.

A mock-up of the Centauro 155 was shown during a June 2011 military parade in Italy and the prototype was unveiled during the 2012 EUROSATORY expo with the intention to present it to the Italian army as an interesting, mobile counterpart to the heavy Panzerhaubitze 2000, also used by the Italians. It attracted a lot of public attention, but apparently not enough to get it accepted in service or mass-produced and it remained in prototype stage. 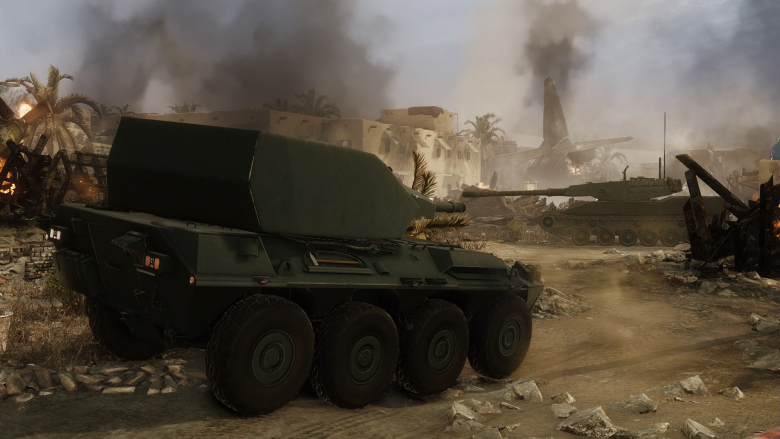 In Armored Warfare, the Centauro 155 is the only Tier 10 Self-Propelled Gun in the game. It is rather unique – for its class it is fairly mobile, especially when going forward on hard surfaces, allowing it to perform tactical relocations rather quickly and to always stay in solid positions. It can even outrun some enemy vehicles should they slip past your teammates.

It also has a rather interesting development history – early in the Armored Warfare development, it started as a Tank Destroyer and quickly became infamous for its massive damage per shot, allowing it, in some cases, to destroy even high level targets with a single round. After several attempts to re-balance it, it was removed from the game and overhauled to become a Tier 10 Self-Propelled Gun to better reflect its real-life counterpart.

As a SPG, it is – for the moment – restricted to the PvE mode. We are, however, running a number of internal experiments with the SPG class in order to determine whether it would be possible to return it to all the Armored Warfare modes in a heavily modified form. It is, however, too early to tell and for the foreseeable future, the Centauro 155 will stay restricted to the PvE mode. And on that terrible disappointment, it’s time to conclude today’s Vehicles in Focus article.