The OF-40 Main Battle Tank is the first Italian-designed heavy armored fighting vehicle since the Second World War. Its development program started as early as 1976, when OTO Melara and Fiat decided to build a new tank in the 40 ton category (the later OF-40 designation stands for OTO Fiat, 40 tons). 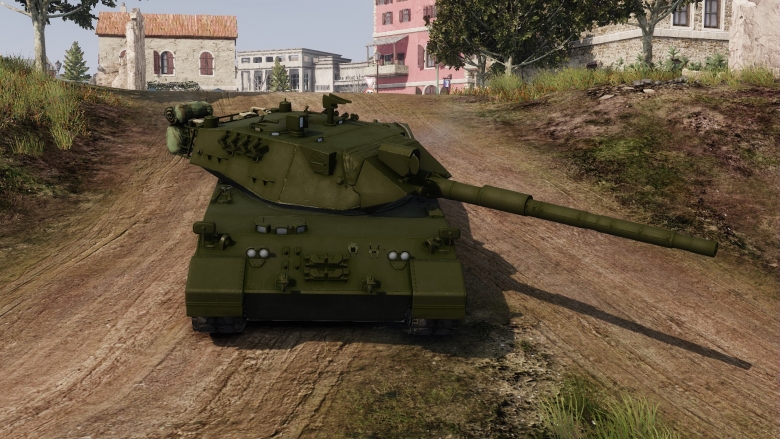 OTO Melara wasn’t developing the vehicle from scratch – in the 1970s, the company license-produced 720 Leopard 1A1 tanks for the Italian military and its experience with the Patton tank series was incorporated into the design as well. The initial version of the tank, sometimes known as the “Lion” or “Leopardino”, was – contrary to popular belief – actually not intended for export, but to replace the aging upgraded M47 and later on the Leopards in Italian service. After that plan failed due to a lack of interest in Italy, OTO Melara and Fiat re-oriented themselves to produce an export vehicle instead. In 1977, the first Lion prototype was built and shown to a Pakistani committee, but in the end the only country interested in the vehicle was the United Arab Emirates and only 18 were ordered (with 2 OF-40 based ARVs, although some sources claim 3), which were delivered in 1981. 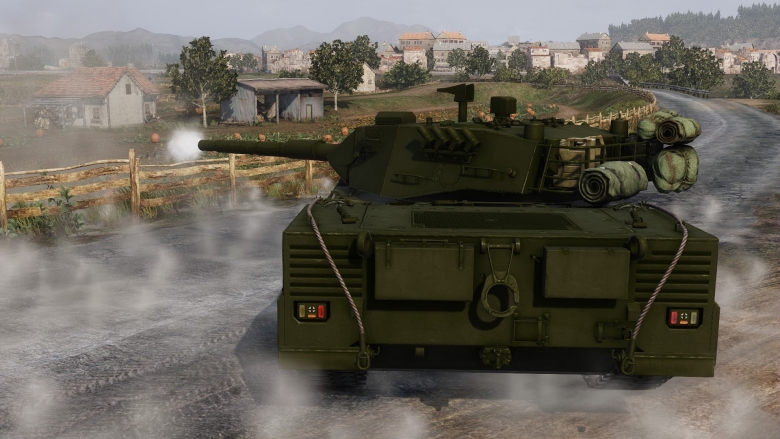 The OF-40 is a conventional design and many parts are similar to (or even interchangeable with) the Leopard 1. It weighs 45.5 tons and has a crew of four (commander, gunner, loader, and driver). Its armor is more or less similar to that of the later Leopards and although there aren’t really any reliable public sources describing its thickness available, protection levels can be deduced to offer sufficient protection mostly only against automatic cannon fire. The vehicle is armed with a non-stabilized 105mm L/52 rifled gun that was designed by OTO Melara with a thermal sleeve, capable of firing standard NATO 105mm ammunition. While its performance is roughly equal to its more famous British counterpart, the Royal Ordnance L7, this gun is not a copy of this weapon, it was developed in Italy. Mobility is very good thanks to a German 830hp MTU MB 838 Ca M500 diesel engine and the vehicle can reach a speed of 60 km/h. 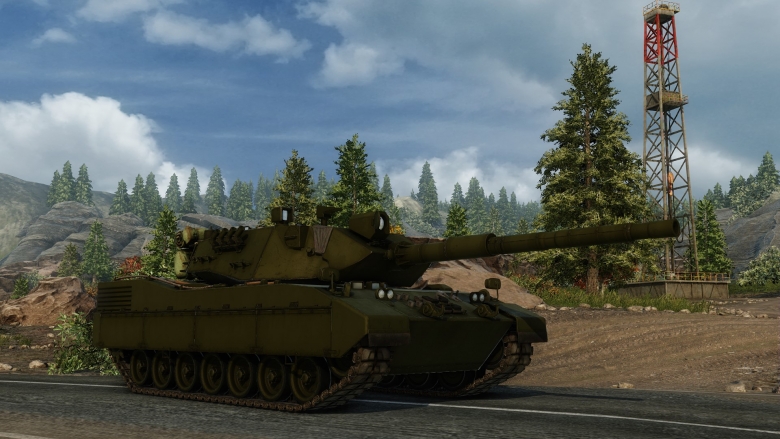 In 1983, an upgraded version called OF-40 Mk.2 was developed, featuring the new Officine Galileo OG 14 LR fire control system with a laser rangefinder and a new stabilized periscope with night-vision for the commander. According to some sources, the 18 UAE OF-40 Mk.1s were upgraded to the Mk.2 version and 18 more Mk.2s were ordered and delivered. There were two other countries interested in the OF-40 – Libya, which considered purchasing 100 Mk.1s and Thailand, which trialed the Mk.2 variant in the mid-1980s as part of a program to replace its aging fleet of American M48A3 Patton tanks. Neither country, however, was interested in the end and the Emirates remains to this day the sole user of the vehicle. This is unlikely to change since OTO-Melara stopped offering the OF-40 as a product some time ago. 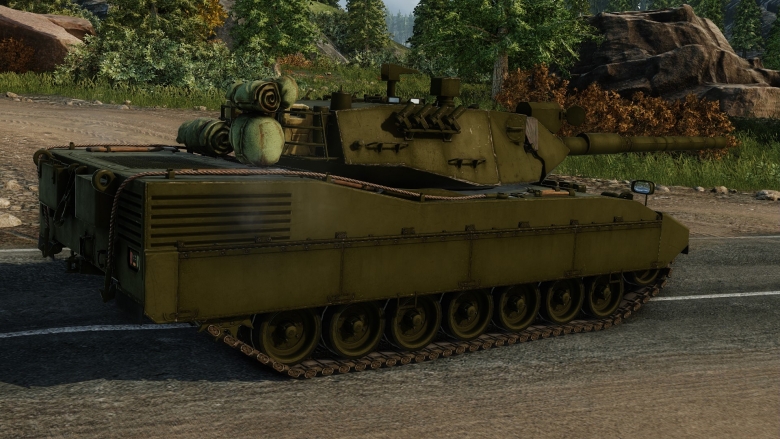 One more version of the tank appeared later on – the Mk.2A, which was equipped with a new turret (resembling the C1 Ariete) and a 120mm OTO-Melara smoothbore gun. This vehicle, however, was never mass-produced.

Even though the OF-40 MBT itself was not successful, its hull was used for several purposes:

The most successful version however is the Palmaria 155mm export self-propelled gun with over 250 made.

In Armored Warfare, the OF-40 is a Tier 4 Main Battle Tank in the Leopard branch, following the Tier 3 Leopard 1 and preceding the Tier 5 Leopard 1A5. This placement is not random, as the vehicle – apart from having the same roots as the later Leopards – is technically roughly on par with the 1A3 and 1A4 versions of the Leopard 1.

It is a fast and mobile Main Battle Tank with relatively powerful armament - the price for its mobility and firepower, however, is a distinct lack of armor. The OF-40 hull is only 70mm thick and can generally only stop autocannon rounds or high-explosive shells from fully penetrating. This makes the OF-40 quite vulnerable in frontal attacks and generally the best tactic is to make use of the powerful turret. The turret – unlike the hull – is actually very thick (200mm of frontal armor) and can withstand a lot of damage, so “hulldown” is a viable tactic for this vehicle. The only weak spot of the turret is its roof, which is very thin and can be damaged even by very weak weapons. On the other hand, the vehicle has a lot of hitpoints (1375) and – if properly positioned with its hull covered – can actually hold its own even when outnumbered. 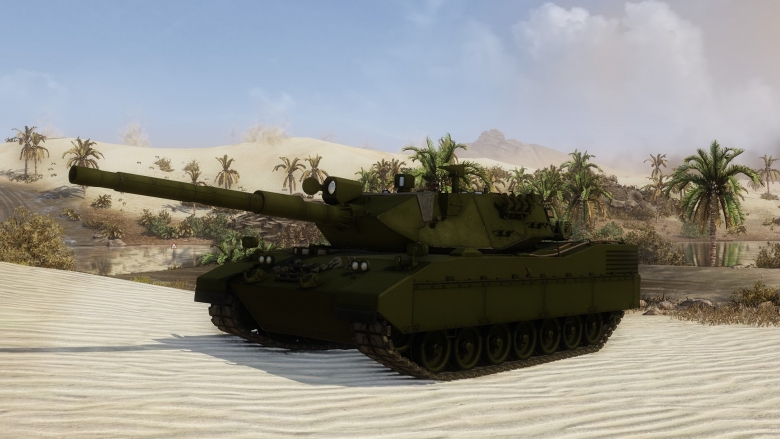 As mentioned above, the mobility of the vehicle is quite good – despite the fact it’s still a Main Battle Tank, it can accelerate reasonably quickly to its maximum speed (60 km/h) and it’s also quite agile, sometimes allowing it to surprise enemies by outmaneuvering and outflanking them. Furthermore, its gun is quite accurate and aims quickly and its HEAT shells especially are devastating against opponents without spaced armor or ERA.

While the OF-40 does not perform well as a classic breakthrough tank due to its thin hull armor, its firepower and mobility make it a decent flanker and an excellent hulldown defensive tank. With careful and conscious gameplay, this vehicle can truly excel on the battlefield.