The Spirithaven season continues with Update 0.32, bringing you the long-awaited Enigma’s Legacy Battle Path as well as other interesting features, changes and fixes.

The Enigma’s Legacy Battle Path is scheduled launch on June 2, 2020. The world is on the brink of destruction with a supervolcano devastating Earth’s ecosystem. It is revealed that it’s been Enigma’s goal all along to shelter those deemed worthy in giant underground vaults. As the few remaining Resistance survivors, your task is to locate the last unoccupied vault left, but it’s not going to be easy because your erstwhile enemies hold the keys to its location. 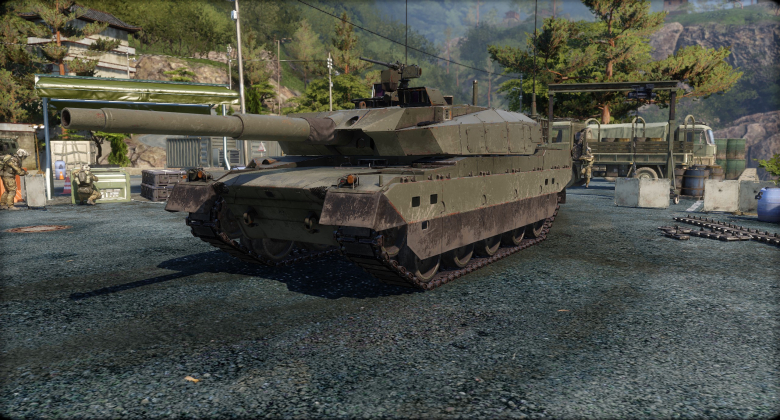 This Battle Path is bringing the new Asian vehicles you’ve been asking for:

Additionally, the Hunter AFV Tier 9 Premium AFV will become available after the launch of the Battle Path a part of the Enigma Loot Crate, containing its blueprints as well as other goodies.

There’s also going to be an amazing set of animated Enigma skins, camouflages, Gold and much more. You can read all about the Enigma’s Legacy Battle Path in our dedicated article.

Get your Enigma’s Legacy Battle Path access now as a pre-order – available as a with a discount!

Other Changes and Improvements

Update 0.32 doesn’t only bring the abovementioned Battle Path, but also other features and improvements, including:

You can read more about the contents of Update 0.32 below:

This update is bringing the majority of assets for the upcoming Enigma's Legacy Battle Path, including four new Premium vehicles:

We are introducing a number of spotting system changes in this update. First, we fixed an important issue that caused many instances of tanks simply disappearing from your sight even if they were not supposed to, connected to smoke deployment.

Additionally, we have overhauled the way the environmental camouflage works. The smaller the bush, the less camouflage it now provides (until now, all bushes provided the same amount) due to the fact that the mechanic will calculate the actual amount of foliage between the spotted target and the spotter. What this also means is that standing inside the bush will provide less camouflage than hiding behind it since there will be less foliage between you and your enemy.

And last but not least, the bonus of bushes and tree canopies (if you knock down the tree and the canopy falls on the same spot) now stacks with the upper camouflage limit being two pieces of foliage. Please note that, for the purposes of this equation, the ADAPTIV camouflage module also counts as foliage (ergo, combining a bush and a canopy with ADAPTIV will only provide a bonus equal to two bushes, not three).

You can read more about these changes in our dedicated article.

We have fixed a number of issues that plagued Mechanized Infantry and have introduced several improvements to its mechanics, including:

Further Mechanized Infantry changes are coming after the launch of Update 0.32. You can read more about these changes in our dedicated article.

Players who leave battles prematurely (also known as "deserters") will face harsher penalties. In addition to the standard penalties (losing income), the deserted battle (if victorious despite their desertion) will not count towards any "victorious battles" goals. Intentionally leaving early in battle will therefore not be usable for completing missions that require victories. The "Deserter" status will be also correctly displayed in the results window.

We've reworked the sounds of shell and ATGM explosions. These sounds are now divided into three categories by the explosion size (small, medium and large) and are more consistent with the actual caliber of the shell or ATGM. We've also tweaked other explosion details and the correlation between explosion volume and distance to provide you with an improved, immersive experience.

We've taken a large number of smaller optimization steps in order to improve the game's performance on certain PCs. This includes things like:

Together, these changes should lead to an FPS increase on some, if not most, configurations.

All the vehicles that can deploy infantry now have animated doors and improved Mechanized Infantry disembarkation animations in order to improve the feeling of battlefield realism. You can read more about these changes in our dedicated article.

As previously announced, in order to improve the gameplay diversity and engagement, we are taking one of the worst performing vehicles in the game (the BMPT Prototype Tier 8 Premium TD) and are upgrading it to BMPT Mod.2000, an early prototype of the BMPT program. The main change is that instead of the original setup, this vehicle will have improved armor and a new turret that includes a single 30mm autocannon and four powerful Kornet-E ATGMs.

The performance of the BMPT Mod.2000 will be superior to the old BMPT and there will not be any progress lost during this change – your old BMPT will simply "wake up" with a new model and a lot of extra teeth. Everything else (XP amounts, crew progress etc.) will be kept the same. For more information, please visit our dedicated article.

We are reducing this mission's difficulty for Tier 9 and Tier 10 vehicles as well as fixing some issues that are left to address: