Recent conflicts in Syria and Ukraine have highlighted the vulnerability of light IFV and APC vehicles to various threats. This, however, is not new information, it's a lesson Israeli APC crews learned the hard way during both the 1973 Yom Kippur War and the 1982 War with Lebanon. High APC losses led – amongst other things – to the development of the first Centurion-based heavy APCs, described in our previous article. 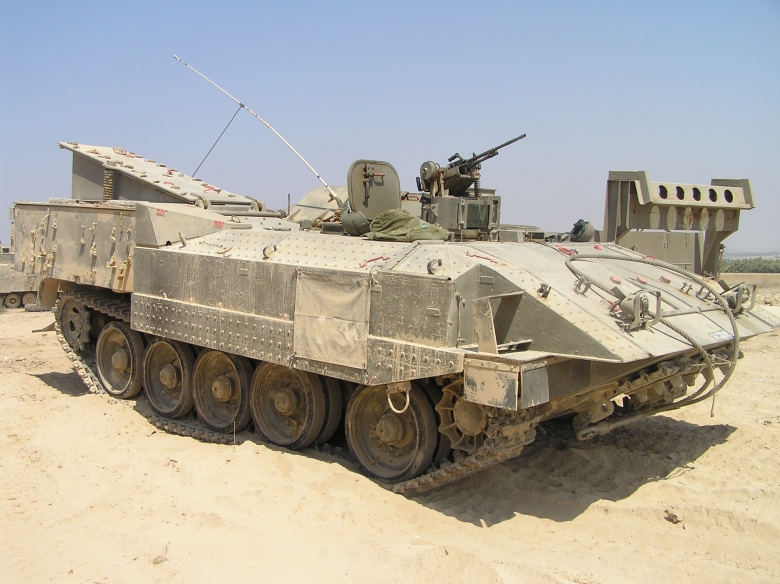 The Centurions were not the only tanks used as a chassis for the heavy APC class. Another such vehicle had its roots in the Soviet Union.

After the victorious Six-Day War in 1967, Israel ended up with hundreds of vehicles captured from the defeated Arab armies, including a large number of T-54 and T-55 Tanks. These vehicles were modified and pressed into Israeli service under the Tiran designation (although later that name also covered the captured T-62s). The name was chosen for 3 reasons according to Israeli sources:

Operating captured equipment had its advantages – Tiran tanks were successfully used during Operation Raviv (part of the Attrition War), where they managed to completely surprise Egyptian forces who thought the tanks were friendly. This resulted in massive Egyptian casualties and the Egyptian leader at the time, Gamal Abdel Nasser, had a heart attack on the day he read the reports about it.

There were two main variants of Tiran:

The early Tiran tanks were modified to meet Israeli requirements in 1969 – the program was called TI-67 (Tank, Israeli, 1967) and included radio stations were changed for those used by the IDF, as were the machineguns. While many western sources claim the engines were replaced for General Motors ones, this was not the case according to Israeli veterans. This change only happened much later during the Achzarit development, although some of the tanks sold later to third parties may have been retrofitted this way as well.

One of the most important changes included welding a number of hooks, boxes and handles to the Tiran hull and turret. This allowed the tank to carry more items, but – most importantly – it made its silhouette different from the standard Egyptian and Syrian T-54s and T-55s, allowing Israeli soldiers to immediately recognize the tanks. At the same time, the fact that after the Six-Day War the Egyptians never released any official information about their losses played right into Israel's hands. The Egyptian and Syrian troops had no idea that the Israelis were operating captured equipment, which led to several nasty surprises during the Yom Kippur War.

Tiran-5 knocked out in South Lebanon

Another odd but important change was the removal of the crew heater. Before the Six-Day War, Israeli recon units noticed that the Egyptians often left vehicles whenever they could, preferring to stay outside. The reason for that was only discovered later on – Egyptian troops were following the translated Soviet manuals for operating these vehicles literally. Unfortunately for them, the Russian instructions were written for cold Russian winter conditions and included orders to turn on the heaters, so the Egyptians did exactly that. The problem was that temperatures during the hot middle-eastern summers could reach 45 degrees Celsius, making it impossible to stay inside the vehicle for any long periods of time.

A number of Tiran-4s and -5s were further improved later by replacing the original 100mm gun (that had to rely on captured ammunition stocks) with the Israeli standard tank weapon, the American 105mm M68 (a licensed copy of the famous British Royal Ordnance L7). Tiran tanks equipped with this gun were called Tiran-4Sh and Tiran-5Sh, with the Sh standing for Sharir (improved). Some sources claim that only Tiran-5 (T-55) tanks were improved by installing the M68. 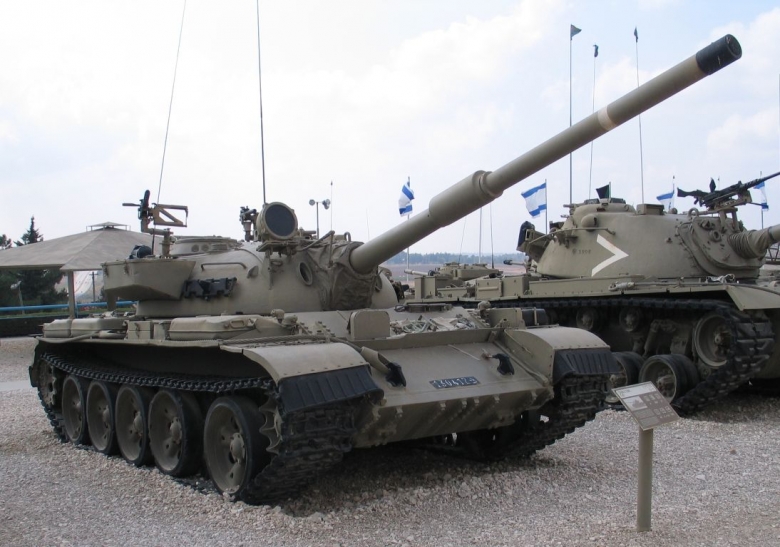 Tiran-5Sh in the Latrun museum

The main problem with the up-gunned T-54 tanks was still two-fold:

In the case of the Tiran, the M68 105mm gun had to be modified to allow loading from the right side where the loader sat. This was achieved by combining the M68 gun barrel with the D-10T breech, an odd combination that, however, worked well.

Attempts were made to upgrade the Tiran with Blazer Explosive Reactive Armor, or to implement Merkava components to Tiran vehicles (the Samovar prototypes, allegedly an ironical reference to the fact that the older diesel engines liked to overheat in the Israeli desert environment), but in the end there was only so much that could be done to improve the performance of the old T-54/55 series. 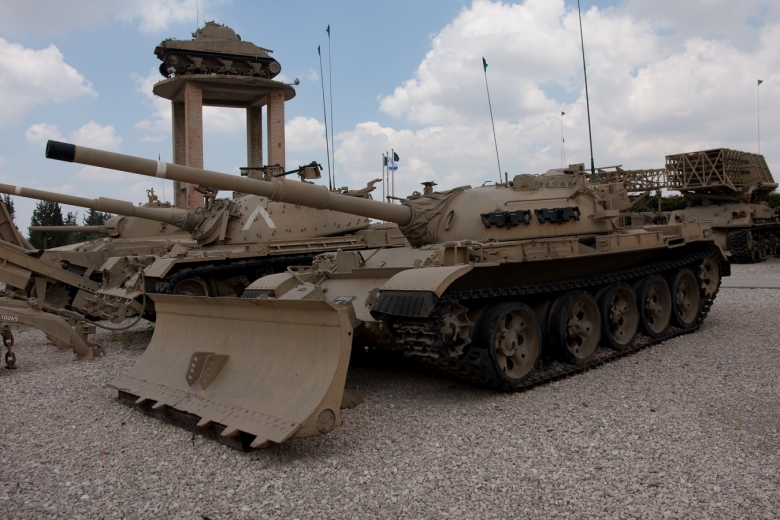 Tiran-5 with a dozer blade

By the mid-1980s, even the improved variants with 105mm guns were obsolete and were gradually replaced by other tanks. A number of them found their way into the hands of Lebanese Christian militias and several of these "Lebanese" Tirans were later captured by Hezbollah in June 2000 and used against Israel. Some were also sold to Uruguay and – in another example of historical irony – to Iran, which was supported by Israel during the Iran-Iraq war despite its traditional anti-Israeli political stance. It's very likely that the Iranian T-55Z includes a number of Israeli components reverse-engineered from the Tiran.

The Tiran remained in Israeli service (mostly in reserve units) until the 1990s when they were phased out.

With the 1982 Lebanon experience in mind, it was decided to use some of the old Tiran tanks to build heavy armored APCs. The first of these vehicles were accepted into service in 1988, under the name of Achzarit (Cruel or Shrew).

The turret was removed and replaced by a rather cramped passenger compartment (the vehicle has a crew of four men and can carry seven infantry troopers). The original hull armor was also reinforced and further enhanced by installing an ERA kit. These changes resulted in a weight increase from the original approximately 36 tons to 44 tons (the turret-less hull weighed 27 tons, while the additional armor weighed 17 tons). 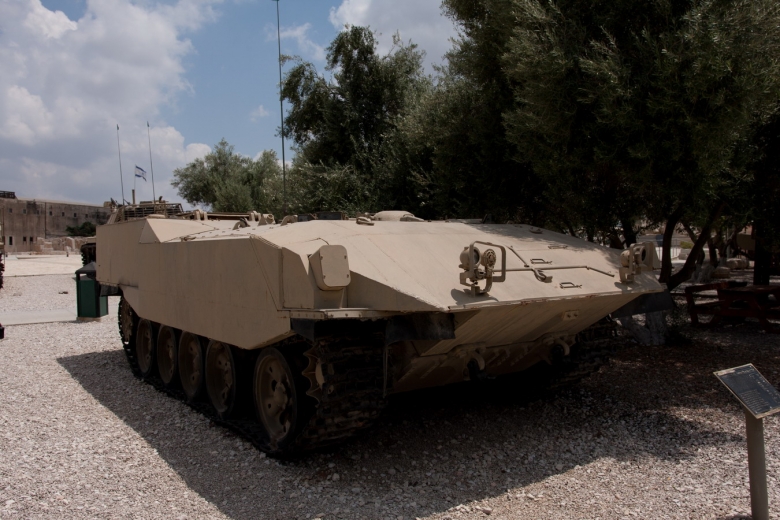 In order to compensate for the increase in weight, the original Soviet 580hp diesel engine was replaced with a modern General Motors V8, producing 650 to 800 horsepower (depending on the model), paired with an Allison transmission. The Achzarit is, therefore, actually faster than the original T-55 in its top configuration and can reach speeds of up to 65 km/h.

The armament of the Achzarit consists of several machineguns in various configurations – from three manned plus one unmanned 7.62mm machinegun in a Rafael Overhead Weapons System, controlled remotely by the operator from inside the vehicle, to a Rafael OWS with a .50cal (only several were made).

The Achzarit vehicles successfully took part in several operations, including the latest Palestinian Intifada. It is estimated that somewhere between 400 and 500 were made and they remain in Israeli service to this day.