Whenever massive tank battles are mentioned, many books and movies speak of legendary battlefields such as Prokhorovka, El Alamein or the Chinese Farm – but rarely mention how the tanks actually got to some of these remote locations. They did not spring from the ground after all – there are man-hours filled with logistics behind every such endeavor.

The common misconception, sometimes fuelled by unrealistic movies, is that the tanks are often moving towards the battlefield on their own, covering hundreds of kilometers. While such things have happened, the most common way for tanks to be transported during the Second World War was by rail or tank transporter. This has several reasons. 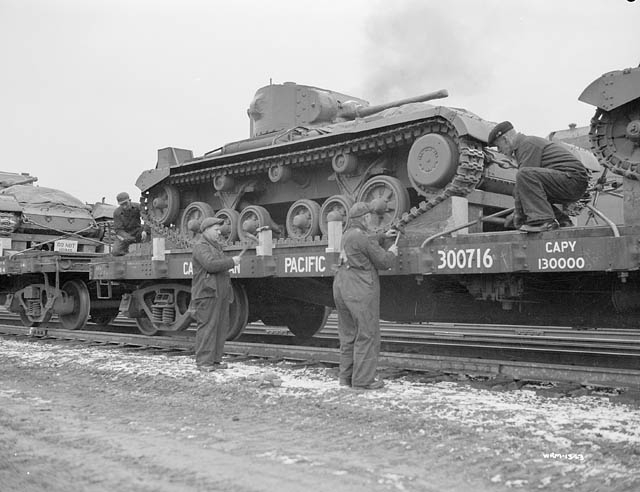 One recent reason (more recent than others) is the nature of the tank itself. While early in the Second World War tanks were often relatively light vehicles weighing around 10 tons, the main battle tanks of today easily reach weights of 50-60 tons. Such weight does have a destructive effect not only on the infrastructure the tank is driving over, but also on any bridges and other such structures the tank might be forced to cross. While we are used to see any bridge as a sturdy structure (after all, we do drive cars over them), in reality a less sturdy bridge might collapse under the pressure such a heavy vehicle (or several of them) would put on it. This was actually a serious problem for the combat use of late war heavy tanks – an extreme case was the Maus: very few bridges (if any) were sturdy enough not to collapse under the weight of this vehicle, forcing the Germans to research other (often outlandish) ways to allow the Maus to cross bodies of water. In one case, it involved a Maus driving on the bottom of a river with a snorkel, while powered by another Maus standing on the shore. Once across, the roles were reversed. 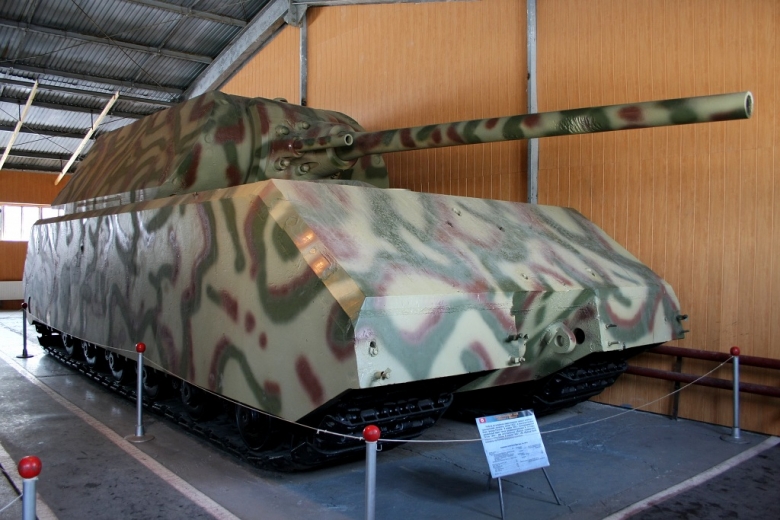 The second problem is the actual durability of the tank. This was once more of an issue than it is now, but in general it can be said that tanks are not meant to traverse long distances on their own. The moving parts in tanks are designed to withstand extreme conditions but this comes at a price. Once again hearkening back to the conditions of Second World War: some late war German vehicles had extremely powerful engines (and other parts) that were designed to basically work under full load for only a few hours. Since those days the situation has naturally improved, but while an average car can drive more than 100 thousand kilometers without the need for serious service, the Russian T-90 MBT requires such an overhaul after 11 thousand kilometers. Another example is the Polish W-46 T-72 engine, whose service life is a mere 2400 hours. 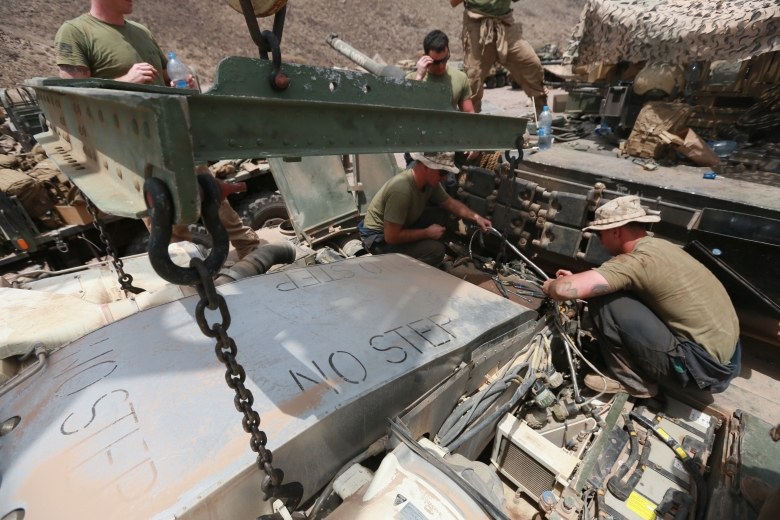 Finally there’s the issue of fuel consumption. An average tank consumes considerably more fuel than an average car – the unofficial “champions” of this are turbine-powered tanks, such as the Abrams. The official Abrams fuel consumption is somewhere around 0.6 miles per gallon, which corresponds to roughly 400 liters of fuel per 100 kilometers. This extremely high consumption makes it much easier (and cheaper) to move such tanks across large distances by other means.

Currently there are four ways of transporting heavy armored vehicles used by the large militaries of the world. The countries with advanced road infrastructure, such as Germany, actually prefer to transport their heavy armored vehicles by road. To do that, they use massive tractors and trailers, commonly referred to as tank transporters. 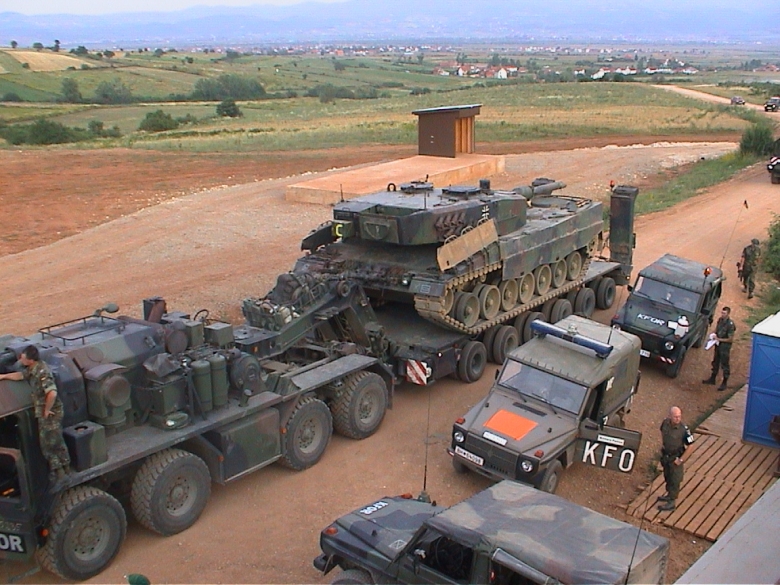 A typical German tank transporter would be the SLT 50 “Elefant” – powered by a 734 horsepower Deutz diesel, this monster (in its newest 50-3 variant) can transport a Leopard 2 MBT. The semi-trailer can carry up to 52 tons and the maximum speed of this vehicle is 65 km/h. In order to transport the heavier variants of the Leopard 2 MBT however, a new, even larger transporter was developed: the SLT 2 70t FSA EK "Mammut". The “Mammut” can carry up to 73 tons. The development of such a behemoth was required to keep up with the increasing weight of the Main Battle Tanks as we’ll see later on. To make sure these vehicles won’t destroy the bridges they cross, the Military Load Classification (MLC) system was developed by NATO to determine the amount of load a surface can safely withstand. Orange markers were distributed across NATO countries (especially near bridges) for the hauler or tank drivers to know where it is safe to cross. The MLC numbers represent the load capacity of the surface in short tons – there are 11 MLC vehicle categories for tracked vehicles and 16 for wheeled vehicles with the wheeled vehicle categories taking into account the number of axles, axle load, axle spacing and gross weight while the tracked vehicle categories take amount mostly track connection surface and dimensions. 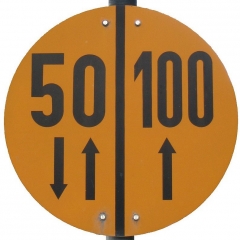 In countries without a densely developed road infrastructure (especially in more distant regions) such as Russia, the preferred method of transporting tanks is by rail (the United States is much the same). Naturally this does not mean that tanks are not being transported by rail in Germany or by road in Russia – only the general preference. That being said, tank developers today are facing the same issues as seventy years ago – namely the weight and size constraints. 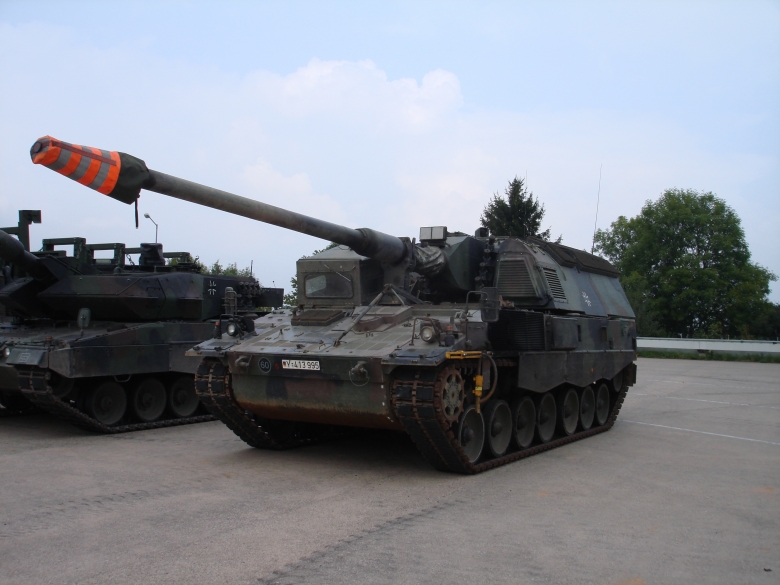 In the last decade, MBT’s have grown heavier and heavier, reaching weights of the heavy tank class of old. This has brought a number of logistical issues with it – some armored vehicles can no longer fit on standard transportation methods. This was always a problem in Europe – one of the reasons the development of heavy tanks was rejected after the Second World War was the fact that these vehicles were simply too big to be transported through tunnels under the Alps. An interesting example of such limitations today would be the Panzerhaubitze 2000 – have you ever wondered why the superstructure’s roof has such a peculiar shape? It’s so that it can be transported by rail and fit. Even the smaller Russian main battle tanks have some issues with railway car sizes – Russian railways have to transport them as an “extreme load”. 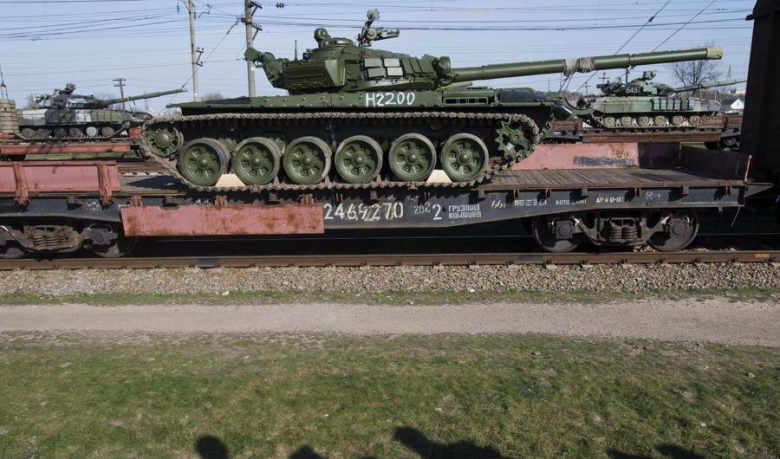 In this picture, the tank is clearly marked as N2200 (the “H” stands for Russian N), a code that means “oversized cargo”, while the numbers represent exactly how much the vehicle surpasses the standard allowed load dimensions on a scale from 1 to 6. This is a serious concern even for contemporary Russian tank designers, and modern Russian tanks cannot exceed a certain size and weight.

Transporting armored vehicles all across the globe is yet another matter entirely. There are basically two options: sea (stored in containers), or air. Each approach has its own advantages: sea travel is relatively cheap but takes much longer, while air travel is not only very expensive, but also requires specialized aircraft. Not every transport plane can carry a main battle tank (lighter vehicles are much simpler, however) and there is only a limited number of such massive planes available, the most common being the American C-17 Globemaster III and the Russian Antonov An-124 Ruslan.

The logistics behind armor deployment are quite literally a science unto itself, with thousands of man-hours of effort spent every time an armored unit must be deployed to a distant location. The ever-increasing weight requirements of western MBT’s stand in stark contrast with the advanced design used in the construction of the Russian T-14 Armata, which offers excellent protection while keeping the weight at reasonable levels, in order to adhere to the very strict weight requirements imposed by the Russian Ministry of Defense.

It can be theorized that, just as they did 70 years ago, modern MBT’s have reached their limits when it comes to weight, and new methods will have to be developed to keep these principal fighting vehicles easily transportable without allowing them to fall into obsolescence due to insufficient levels of protection.