If you’ve been keeping up with the recent Armored Warfare announcements, you probably know already that for Update 0.33, we are planning a major overhaul of the Tier 7 to Tier 10 balance. However, the update is still quite far away (two months at least) and we are not ready to present you with the full picture of what we are trying to accomplish. So, instead, we will first tell you more about what the philosophy behind the changes is and why we are doing what we are doing. 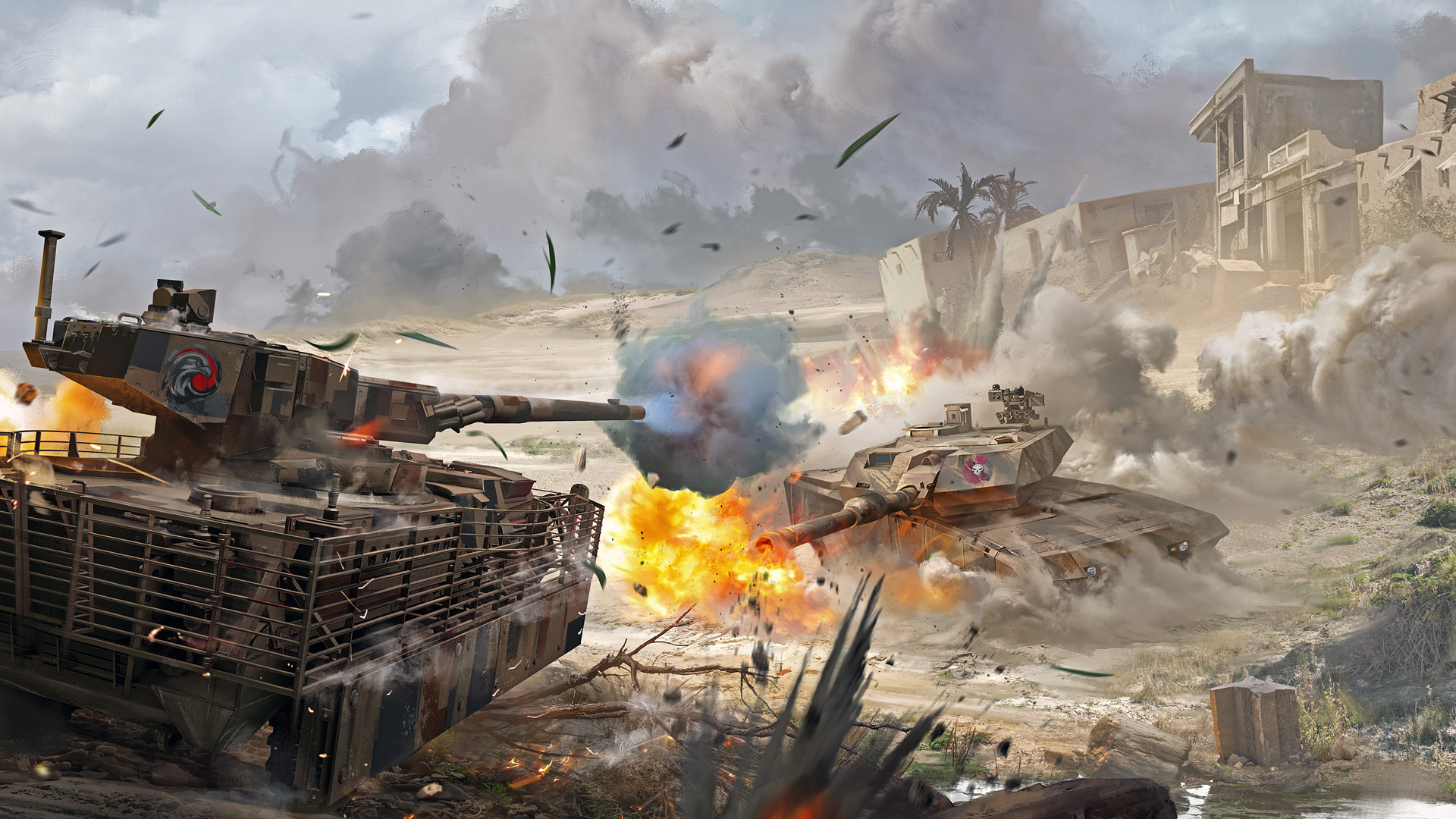 As we mentioned in the above-linked article, one of the core issues we want to address is power creep, so let’s talk about that first.

Power creep is a situation that typically occurs with live service games, where newly added content is more powerful than the existing one, gradually rendering the old content obsolete. The reason why this happens is more or less obvious – live service games, especially free to play games, depend on a steady stream of income to survive, which can only be provided by a steady stream of new content. And, let’s face it – nobody really wants to get new stuff if it’s performing worse than the old one and it doesn’t matter what item it is, a sword, a piece of armor or a tank.

As a developer, you can dread it, run from it, but if you want to keep your audience interested over prolonged periods of time, power creep arrives just the same. The trick is to not make the new items that much more powerful and, at the same time, to periodically update the old items to keep up with the new.

When it comes to Armored Warfare, the power creep effect was during the recent years mild – for the most part. Some mistakes were made, but, generally speaking, we’ve kept power creep at bay for a long time and avoided intentional, blatant pay to win scenarios, even if some Premium vehicles are, politely put, highly competitive.

Nevertheless, our game has reached a state where not only is a rebalance of the older vehicles needed, but, in some aspects, the power creep effect has reached a level where any further (even minor) performance increases would go beyond the limits of what’s possible within the game’s rules.

A typical example of this would be the MBT viewrange values. With high Tiers, we’re at a stage where the MBTs have basically outclassed all other classes in scouting because they have caught up with them when it comes to their spotting abilities. At the same time, scouts cannot be improved any further due to the existing map size and engine restrictions. This is one of the things that we’ll address, but let’s first discuss Tiers in general.

Up until Tier 6, the vehicle power progression (where vehicle power is their capability on the battlefield based on their characteristics as a whole) is more or less regular:

At Tier 6, however, power progression starts breaking down, which is why we decided to give special attention to Tiers 7 to 10. As things stand now:

As a result, the Tier 9 and Tier 10 vehicles form a sub-category of their own and massively outclass Tier 8 vehicles to the point where going up even in a fully upgraded Tier 8 versus a fully upgraded Tier 9 is extremely difficult, resulting in a practically unwinnable scenario. Tier 9 versus Tier 10 battles are equally as problematic and, as a result, the “transition Tiers” (7 to 9) are not exactly popular.

It’s worth noting, however, that we are not talking only about armor or firepower, but the sum of the vehicles’ properties and also about Tier averages. Within each Tier, there are outliers – vehicles too weak or too powerful to fit this description.

Regardless, especially for the top Tiers, the power spread for Tier 9 and 10 became very wide over the years for several reasons, including power creep. When you inflate each power bracket with new, slightly more powerful vehicles, this is what you get – the top configurations getting further and further from lower Tiers. Lower Tiers were spared this effect simply because we did not add too many new vehicles to them and those that were added were generally not more powerful than their older counterparts because there was no real need to do so – low Tier vehicles are, for most players, simply an obstacle on the road to higher Tiers and therefore they do not need to serve as the primary incentive of a branch (or event). 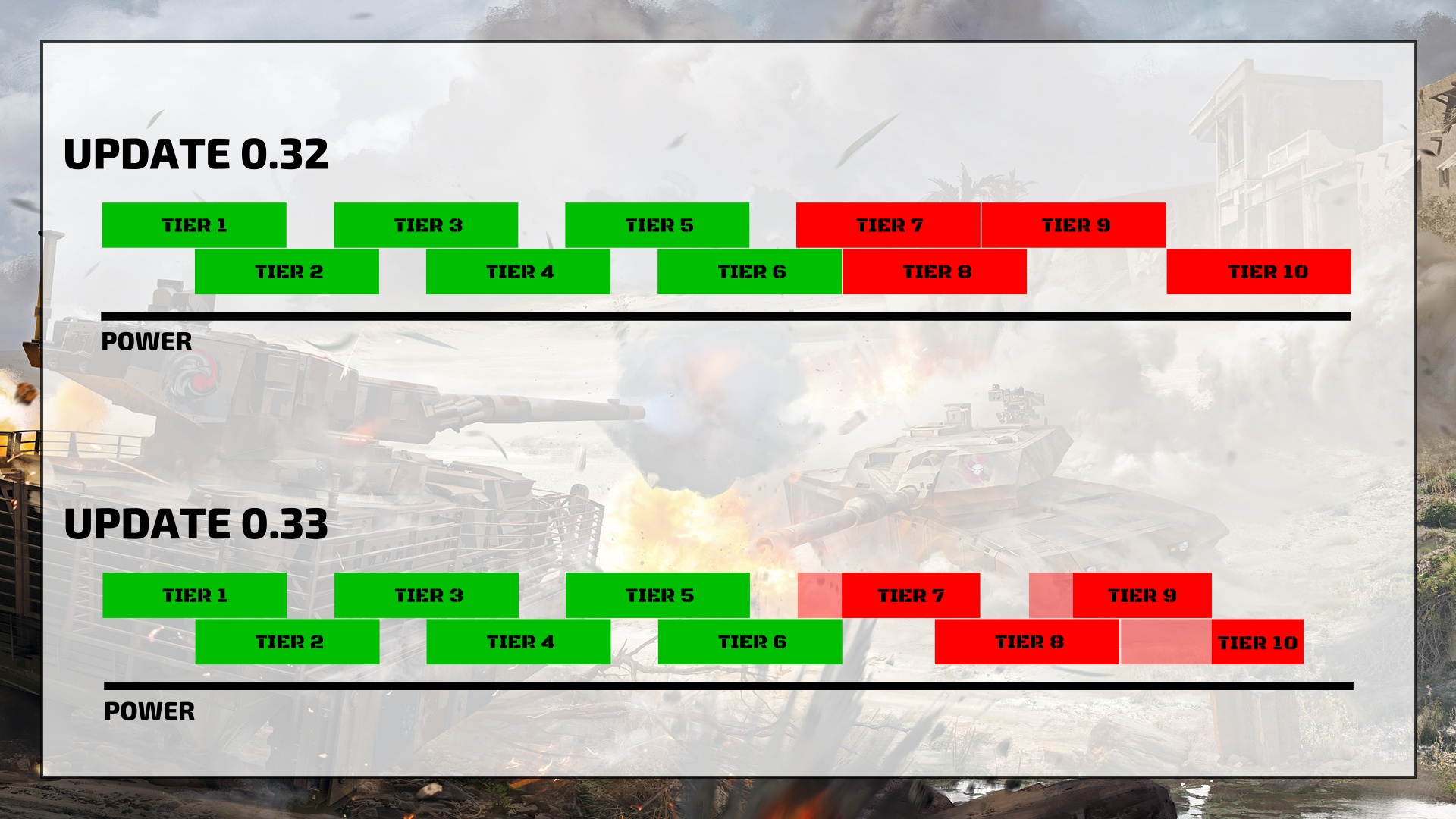 One question therefore remains: what will we do about it?

A number of things.

For one, we’ll cut the Tier 7 power bracket (the spread between the weakest – stock – and the strongest, fully upgraded machine) by roughly 25 percent. At the same time, we’ll move it a bit further away from Tier 6 so they don’t overlap as much.

Tier 8 is where things start getting interesting. Before, it largely overlapped with Tier 7, which is not idea. We’ll be pushing the Tier performance bracket further from Tier 7 so that the entire progression resembles the one on lower Tiers. While currently a fully upgraded Tier 8 vehicle is roughly 25 percent stronger than a fully upgraded Tier 7 one, this difference will become as wide as the one between fully upgraded Tier 6 and Tier 7 vehicles.

What is extremely important to realize about what was said above is that all these changes are relative to one another. The power bracket percentages do not translate directly to statistic updates. When we say the power bracket size will increase by a half, it does not mean that the vehicles will have their statistics buffed by 50 percent.

What you should take from this is the following:

Of course, there’s much more to this rebalance than smoother progression between Tiers. Battlefield roles will be addressed, mechanics will change, and individual vehicles will be tweaked.

With that being said, we understand your desire for more information. This first developer diary style article is here to lay down the basics, to assure you that we understand the issues that plague this game and are ready to tackle them head on.

Everything will be explained in the future, but, for now:

Learn more about the visual improvements to the models we are making in Update 0.33 in order to make them more realistic

Learn more about the intended class roles for Update 0.33 and what we will be doing with them in Update 0.33