In one of our past articles, we published the story of Ján Bodnár, a Czechoslovakian citizen who used the OT-65 armored car to escape from communist Czechoslovakia. In the 1960s, such escape attempts through closed borders were not only rare, but also extremely dangerous and Bodnár was one of the few that succeeded. There were other, far less successful, escape attempts by those who often paid the ultimate price in pursuit of their dreams of freedom. This is one such story. 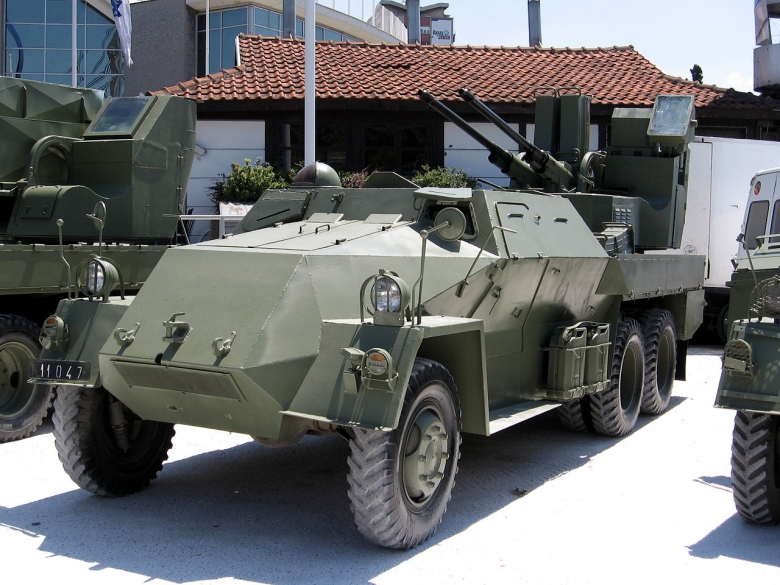 In early 1964, three men met during their mandatory military service in Mladá – Vratislav Svoboda, Jan Vejvoda and Jiří Jirouch. None of them was serving voluntarily, let alone actually enjoying the service, and they all shared enmity towards the dictatorial communist regime. They all dreamt of escaping the "Workers' Paradise" and starting new lives in the west. They were, however, no fools and realized that their country's borders were protected by merciless guards who shot on sight, electrified barbed wire and deadly booby traps.

They served with the 15th Regiment of the 13th Tank Division and decided (much like Ján Bodnár five years later) that to successfully escape, they'd have to steal one of the armored vehicles attached to their unit and use it as a battering ram to force their way through the heavily blockaded border crossing. The armor could also protect them against small arms fire from border guards. The borders were staffed with the most loyal and ruthless supporters of the regime, who would not hesitate to kill even unarmed people attempting to escape.

Their first idea was to steal one of the older OT-810 halftrack APCs, but the tracks of these vehicles were so loud that the risk of being discovered and stopped was too great. All three served as drivers of Praga V3S trucks and it was this job that gave them the idea to use one of the armored self-propelled AA guns on a V3S chassis to escape. This vehicle's official designation was Samohybný Protiletadlový Dvojkanon vz. 53/59 (Self-propelled Anti-aircraft Twin Gun 1953/1959 pattern), but it was commonly known as Ještěrka (the Lizard).

The Lizard was one of the legendary products of Czechoslovak armor design. Built on a modified Praga V3S chassis, the brutal firepower of its twin 30mm cannons made this self-propelled AA gun a rugged and effective vehicle, both against low-flying targets and in a ground support role. Around 800 (some sources claim 900) were built between 1959 and 1961. In the early 1970s, Libya purchased roughly 100 vehicles that eventually found their way all across Africa, but the vehicle saw most of its action during the series of break-up wars in Yugoslavia, where it gained quite a reputation.

Four of these vehicles were held in reserve in a garage near the barracks and the men decided to take one of them. The garage was guarded but the patrolling guards were conscripts like them and the three men quickly befriended them. They slowly began to prepare their escape plan.

One crucial piece of information all three deemed necessary was the state of border security. During his leave, one of the three men – Jiří Jirouch – went to Prague to visit a friend who described the state of the border to him. When he returned, all three of them were ordered to participate in a military exercise on February 25 1964. They returned on the 27th and decided to set March 3 as the date of their escape attempt. They wanted to use the early morning fog for cover.

It was probably at this point that things started to go sideways.

Before the escape, Jan Vejvoda was supposed to go on a two day leave to Prague, take a borrowed car and verify the situation at the border. Instead of doing that, he stayed in Prague with his girlfriend Dagmar Tomcová, and instead of checking on the border security himself, when he got back he only repeated what he had heard from Jirouch about the flimsy wooden barriers on the border. His friends, oblivious to his deception, proceeded with their preparations. They decided to include Tomcová in their plan. She was 10 years older than Vejvoda, spoke fluent German, had relatives in the USA and – most importantly – was just as fed up with the regime.

On March 2 at 4 AM, the men woke up, put on their uniforms and went to the garage with the four Lizards. The guard let them pass, recognizing them as mechanics and drivers. In silence, the three men fueled up one of the 10 ton vehicles, checked the batteries and drove it behind a series of trees within the barracks area. Hidden from sight, they left it there and broke into a small arms shed that only had a flimsy lock and stole six pistols and plenty of ammunition. They stored the guns in the vehicle and returned to their barracks. They spent the day on edge, worrying about someone discovering the theft. However, security, consisting mostly of conscripts, was lax and in typical socialist regime fashion, no-one cared about anything.

They waited until almost 11 PM. Under the cover of darkness, they all snuck out of the barracks, made their way to the hidden armored vehicle, started it up and drove unchallenged from the military compound.

Their plan was to drive to Prague instead of directly to the borders to pick Tomcová up. Driving through the countryside where military vehicles were a common sight, they made it to Prague at around midnight. In a brazen display of confidence, they left the armored vehicle parked in front of Tomcová's apartment, took their time in the dead of night loading her luggage, had a coffee break and only then – at roughly 1 AM – drove off towards the borders through the empty night streets of Prague.

When they reached the city of Cheb near the border, they re-fueled the vehicle from portable canisters, prepared the pistols and hid in the armored cabin of the Lizard. Revving the engine, the armored monster with military-grade lights piercing the morning fog drove slowly towards its meeting with destiny.

The vehicle finally reached the border crossing at Pomezí at around 6 AM. Upon seeing the armored vehicle, the guardsman didn’t realize it was an escape attempt until the engine roared and the Lizard smashed into the first wooden barrier, completely destroying it. At that point, two more guards ran out of the station, frantically trying to load their rifles. Vejvoda drove the vehicle into the second barrier and continued to accelerate, but a terrible loud crash and the sound of shredding metal suddenly shook the cabin.

What Vejvoda did not know was that, contrary to the old information, a third barrier had been installed at the crossing. The first two barriers were wooden, but the third consisted of concrete pillars with a thick steel beam wedged into them. The vehicle went into the beam at full speed and the force of the impact bent it, but the wheels were heavily damaged and the entire Lizard was now stuck on the beam, unable to move forwards or backwards.

The doors opened and the driver – Vejvoda – and his girlfriend climbed out and started running towards the border. Svoboda slowly followed them but Jirouch was stuck inside, seriously wounded and bleeding. 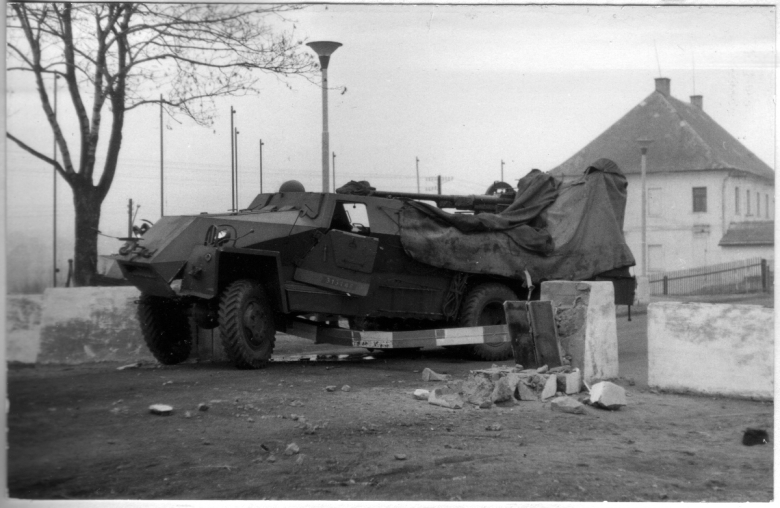 The "Ještěrka" vehicle, stuck on the barrier

The three guards started firing at the runners, the bullets ricocheting off the armor of the vehicle. Tomcová was hit by three rounds in the back and died instantly. The other two were stopped and arrested. It was all over.

Dagmar Tomcová was officially pronounced dead soon after the shooting and the two men were escorted to the local barracks. Jiří Jirouch, wounded and stuck in the destroyed vehicle, was pulled out and arrested as well.

Ironically, the last steel barrier had been installed only a week before the escape attempt. If Vejvoda really had checked the borders instead of staying with his girlfriend for that one weekend in Prague, he could have warned his friends – the barrier was avoidable from both sides. 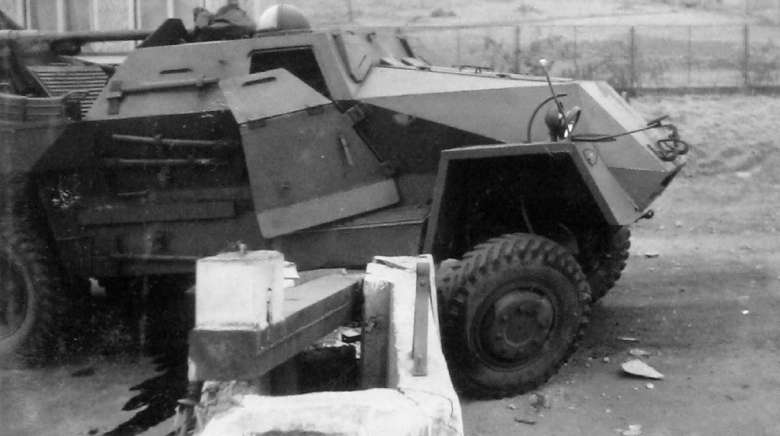 The "Ještěrka" vehicle, stuck on the barrier

All three men were sentenced to prison by the court in Příbram – Jirouch for six years, Svoboda for eight years and Vejvoda – as the organizer – for nine years. In some ways they were lucky – a decade earlier, they would have received the death penalty. The border guards who shot Tomcová received medals for their "successful action".

After the trial, all three were separated and never saw each other again. Vejvoda tried to escape from prison and was shot by guards on September 20 1964. The other two were released after five years during the Prague Summer. After his release, Vratislav Svoboda moved to East Germany, where he died in 1975. Jiří Jirouch continued to work as a driver and after the fall of communism he started a small business. He lives in the Czech Republic to this day.

The death of Tomcová was investigated in the 1990s and the guard who shot her was put on trial, but in 2000 he was acquitted of all charges when he proved he was only "following orders". No one was ever punished for this action.