We haven’t had a real life article for a while now and since Europe’s just about covered with a fresh blanket of snow as of writing of this text, we figured it was high time we made another one. Let’s talk about tanks in cold weather then. 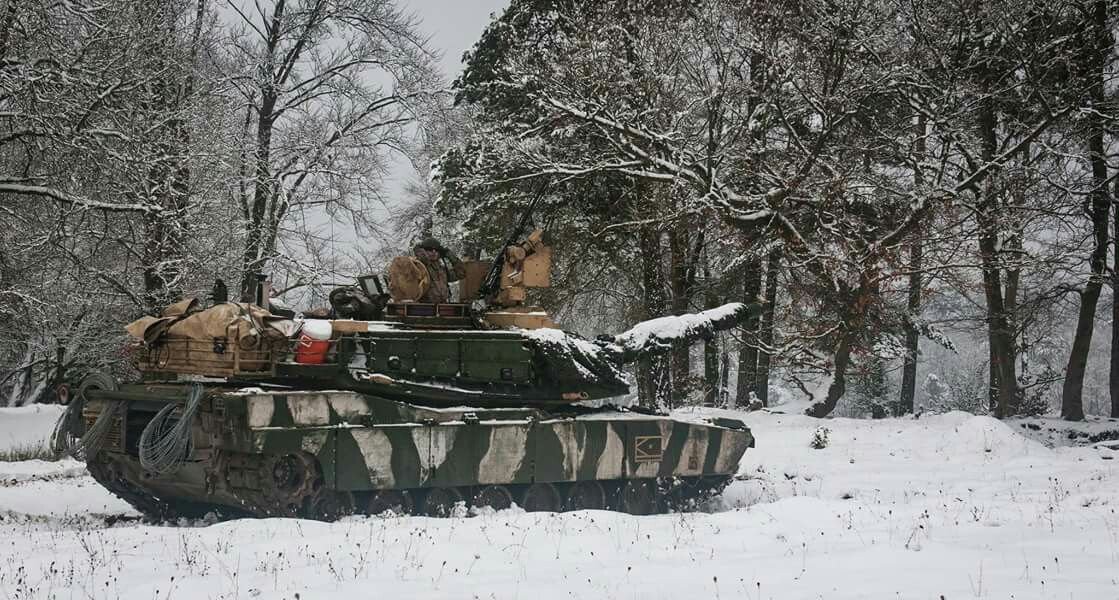 Fundamentally, operating an armored vehicle in cold weather isn’t all that different from operating any other piece of machinery. The lubrication needs to be stepped up and adjusted for lower temperatures (by the use of Arctic oil and a synthetic lubricant), engines have to be pre-heated where necessary and surfaces get slippery. Ammunition must be stored in warmth and armored vehicles must be kept buttoned up in order for the ice not to get inside with the external modules vulnerable to frost covered with plastic or canvas sheets.

Winter affects tank mobility more than you might imagine. On icy surfaces, steel tracks become slippery and the tank therefore becomes far more difficult to control, sometimes leading to spectacular cases of drifting. This can be countered by the use of grousers – track extenders that increase the grips of the vehicle. The same goes for soft surfaces such as deep snow or sand for that matter. The loss of track grip creates major issues for tracked vehicles that cannot be easily fixed. Wheeled vehicles can typically have snow chains installed on their wheels whereas tanks rely on their tracks only. Either way, driving in winter (and especially in rough areas or mountains) should only be performed by skilled crews with special training.

Generally speaking, the ability to pass through harsh terrain has improved tremendously since the days of the Second World War. Where the Soviet tanks had a clear advantage over German tanks in the winter of 1941 thanks to their wide tracks, the off-road performance of all MBTs today is more or less comparable, but the same can be said of MBT design in general. There are very few truly poor outliers these days.

When it comes to frozen bodies of water, trying to traverse one with an armored vehicle requires the ice to be at least 40cm (16 inches) thick for a 16 ton vehicle with every additional ton requiring an extra inch (2.54cm). In other words, crossing a frozen river with a 65 ton Abrams would require the ice to be over a meter and a half thick. This applies to the temperature of 10 degrees Celsius or below – above, extra 25 percent of ice thickness is required. 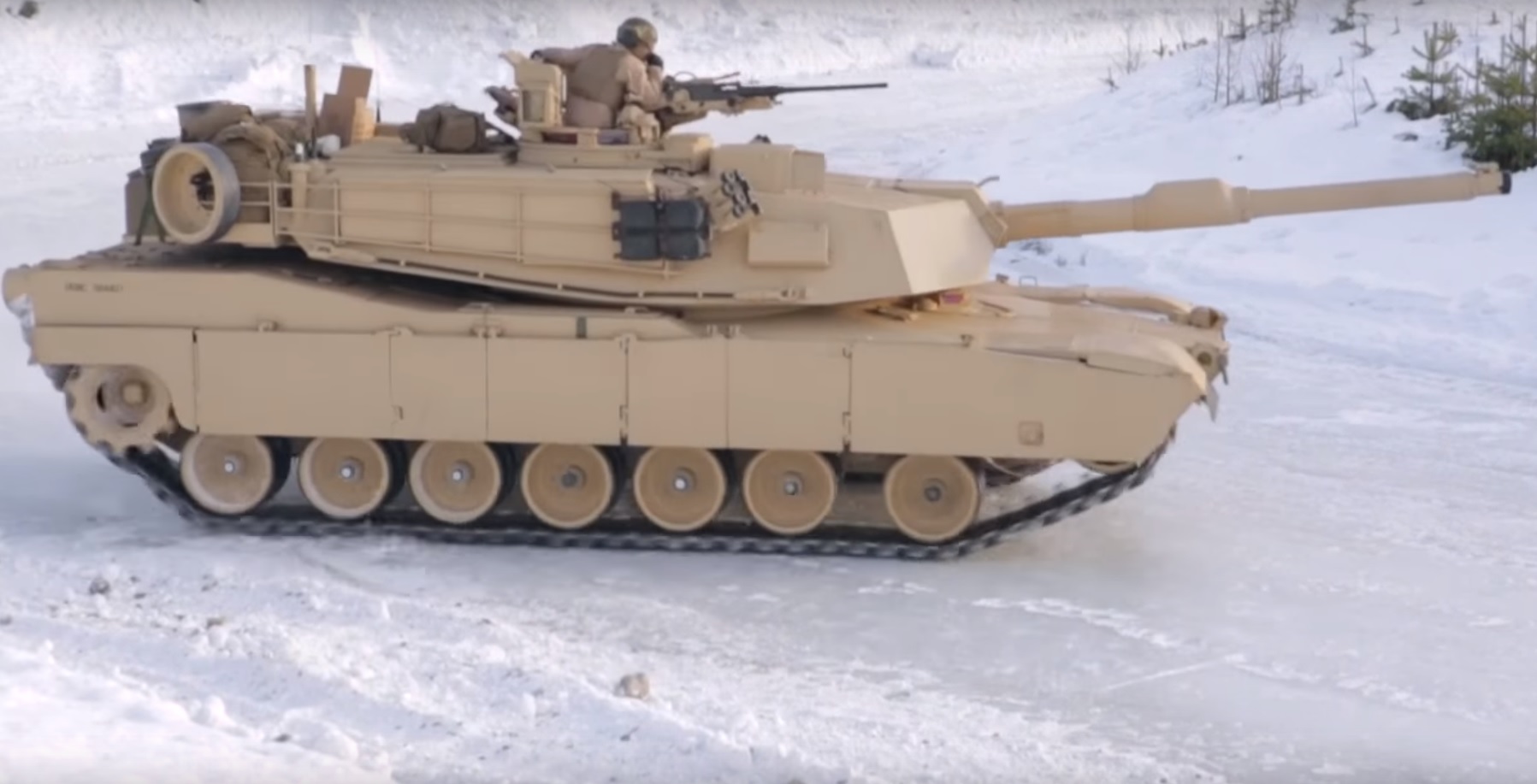 Humidity in winter can also make the vehicle itself a hazard. Metallic objects such as tank hulls become incredibly slippery, something the crews (or troops riding them) must be aware of. To counter this, modern tanks are covered in anti-slip surfaces on the parts of their hull where such a danger might arise. And then there’s the cold itself. Aside from the abovementioned proper lubrication of their moving parts, tanks can be susceptible to their engines freezing over and thus being difficult to start without external aid. Typically, in freezing temperatures, armored vehicle engines should be started every two or three hours to prevent freezing, and the engine should be kept running for at least 10 minutes before the actual use. At -30 degrees Celsius or lower, the engine should be kept running continuously.

There are ways around though if an engine start is required on moment’s notice, especially in Russia where freezing temperatures in winter are commonplace. In the past, the crews would actually start a fire under the tank’s engine to defrost it. Today, however, Russian Arctic units are using the T-80 series MBTs. These are pretty much the supercars of the tank world – powerful but extremely expensive. 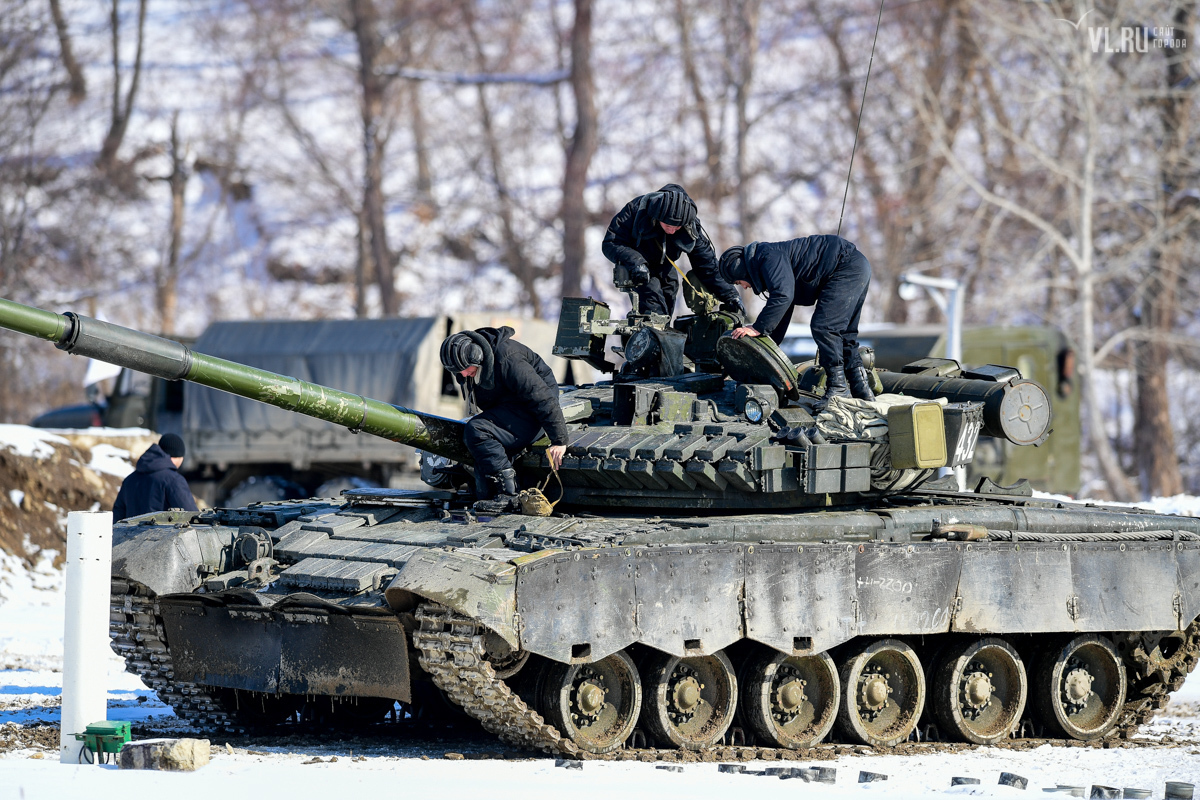 They do, however, have one massive advantage over their T-72 and T-90 series service counterparts – they are equipped with a gas turbine rather than a standard diesel engine. Gas turbines can easily start at the temperatures of up to -40 degrees Celsius, which makes these tanks extremely suitable for cold environments to the point where Sweden, an otherwise neutral western country, tested a pair of them in 1993 and actually seriously considered them for service.

The Russian Arctic units are currently being equipped with an upgraded version of the T-80B MBT – the T-80BVM. By the end of 2019, roughly 200 of these were in service according to Polish sources along with roughly 500 older T-80 variants – mostly the T-80U and T-80BV. The backbone of Russian tank forces, however, are the diesel-equipped types, T-72B3 (roughly 1000 in service) and the T-90 series, including the cutting edge T-90M. It’s worth noting that the NATO countries do not have any such special tanks for winter environments, they rely on specific winter maintenance procedures for the standard equipment.

Aside from the environment itself, tanks in winter have to beware of ambushes and enemy troops. This used to be a lot harder back in the early days – visually, it’s very easy to conceal the human body amongst snow drifts and trees that naturally break silhouettes. All you really needed to do was to dress in white. With the advent of thermal imagers, however, the tides have turned and a warm human body stands out nicely in the IR spectrum against any cold backdrop. The same goes for military vehicles – it is extremely difficult to conceal a running tank, especially the abovementioned tank turbines produce a lot of heat, which, in this sense, is a double-edged sword. The sound also travels farther in very cold weather, also something that has to be accounted for when it comes to loud armored vehicles.

As such, ambushes are much harder to accomplish. Tanks can therefore be fought in winter either at distance with ATGMs, or passively by leaving various traps behind (a typical example would be to create a hole and cover it with some branches and a lot of snow). It’s crude but can occasionally work. Mines, however, tend to fail in extremely low temperatures. Firing a tank gun is another thing that the winter can affect. For example, in deep snow, high explosive shells are typically up to 40 percent less effective. 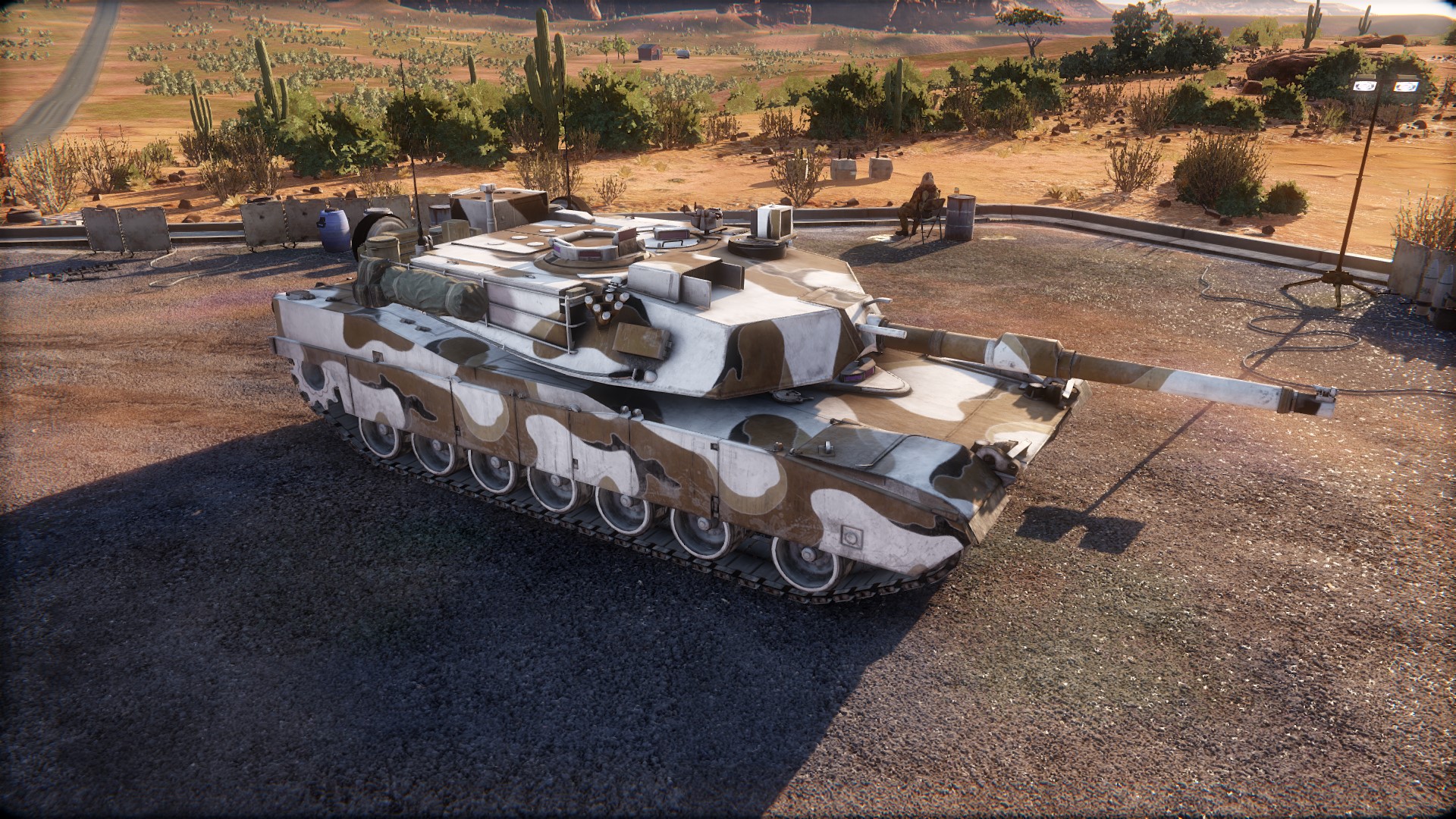 But not everything’s difficult in winter. Visual camouflage tends to be a lot easier when the whole world turns white. All you need to do is paint your vehicle white. Of course, there are also different approaches to the matter. The older American MERDC camo patterns, for example, used a system of four colors that could be tweaked for winter forests or winter plains. This was, however, deemed a bit too complicated. The modern 1986 NATO pattern (in use pretty much everywhere, from France to Germany) uses three colors – green, brown and black. In winter, the black spots can be painted over with anything white at hand (such as lime) to produce the winter version. 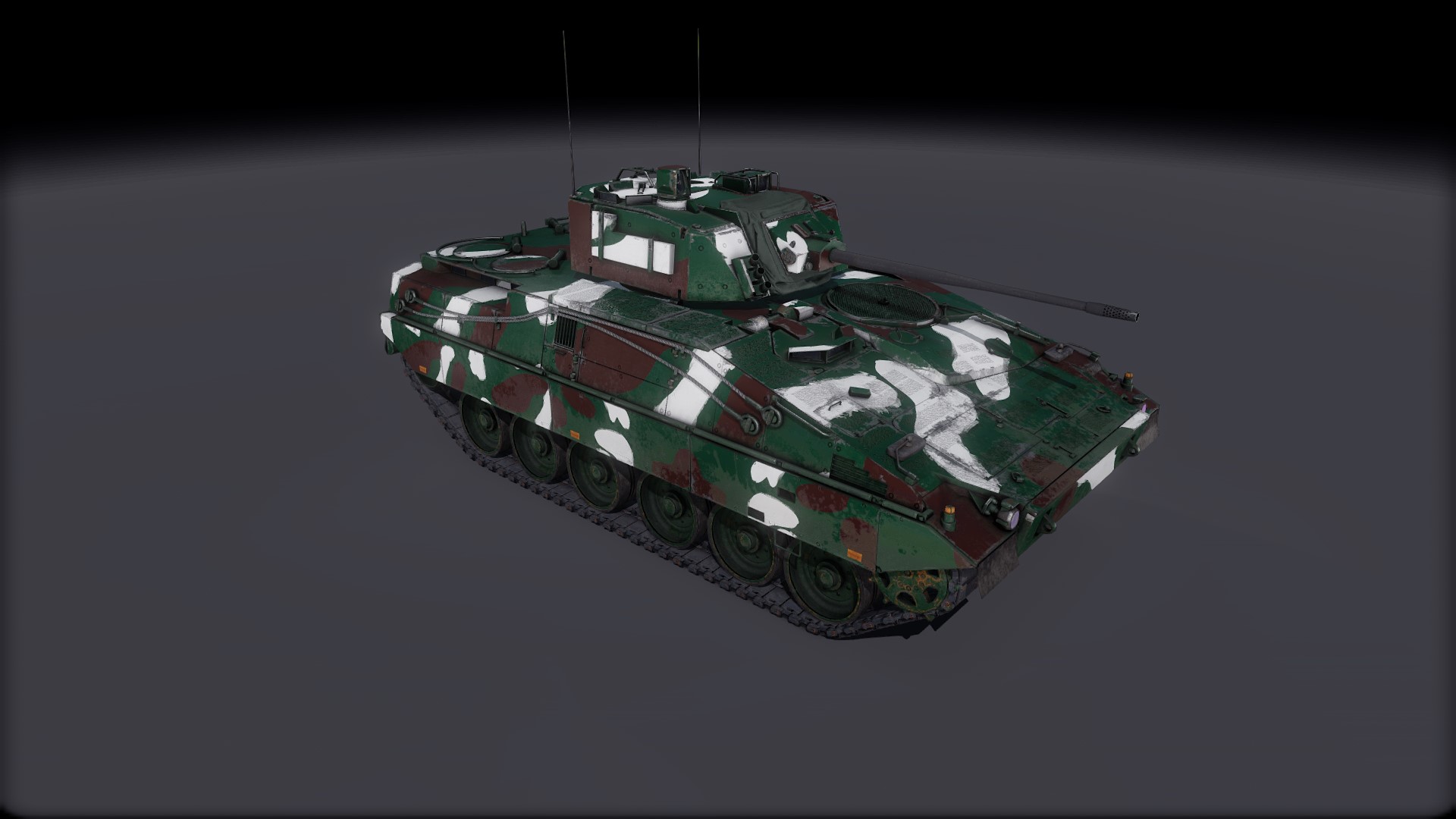 China does have dedicated winter camouflages (typically digital) while Russia commonly uses its three-tone camouflage for all environments. The Arctic units do also simply use the color white to disguise their vehicles. The Scandinavian countries have, of course, their own set of camouflages, as does Japan.

Winter warfare is closely tied to mountain warfare, which comes with its own set of additional issues for the crews to deal with. Standard MBTs are typically not suitable for mountain operations. Mountain roads tend to be narrow and of poor quality and a 50-ton MBT would do more harm than good over there. Armored units moving slowly through ravines are also highly susceptible to ambushes.

Additionally, the thin air of higher altitudes significantly reduces the power output of standard engines (up to 20-25 percent). During extended operations, these have to be modified to increase the engine’s air intake, which isn’t an easy thing to do. Subsequently, there are very few armored vehicles suitable for such things. Logistics-wise, armored vehicles in the mountains consume significantly more fuel (30 to 40 percent on average).

Operating armor in high altitudes is a very small niche of warfare, but an actual one. There are currently two “hotspots” where such combat may occur on large scale. Both are in India – the Kashmir region where India’s and Pakistan’s interest clash, and the region of Ladakh where India is at odds with China. 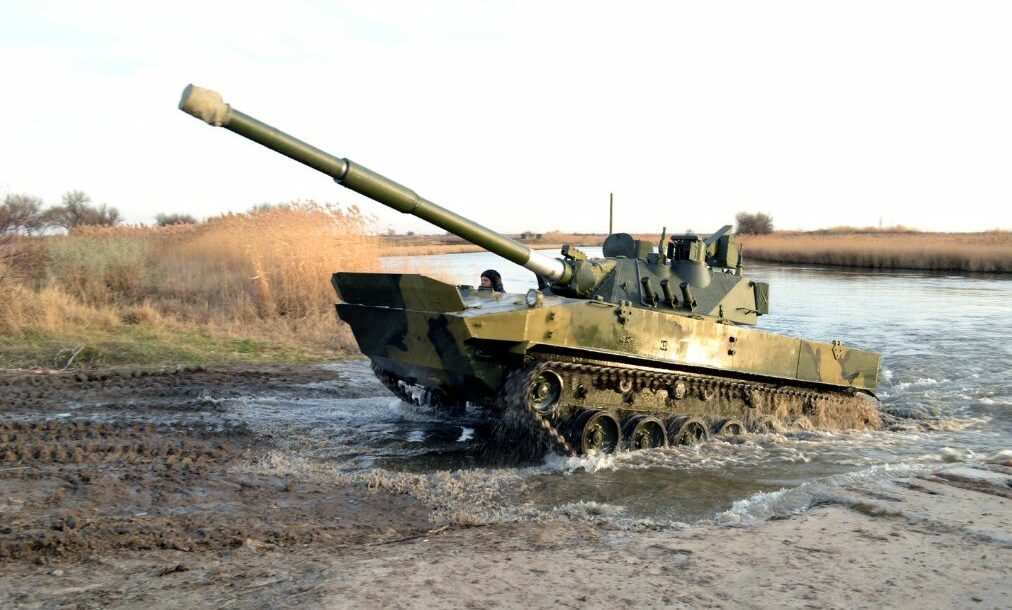 Especially the latter has been a hotbed of trouble lately with tensions escalating over the last year. This is an ancient conflict over borders – the Sino-Indian dispute exists for more than a hundred years and both sides lay claims over the territory. To (also) provide fire support in high altitudes, China has developed its brand-new Type 15 Light Tank, which should give the Chinese troops an edge in this theater of operations due to its considerable firepower wrapped in a compact package. India, on the other hand, has to rely on its fleet of license-produced T-72 and T-90 MBTs and is currently looking for something to counter the threat of the Chinese Light Tanks – specifically a modernized version of the Russian Sprut-SD fire support vehicle (originally intended for Russian paratroopers). Hopefully, it’ll never be truly needed.