After a round of quick pleasantries the two men sat down. Andrew Clayburn reached behind one of the innumerable books found lining the large room and brought up a flask of whiskey. He turned towards the other two, grinning.

“Gentlemen! For the last part, we’ll need it.”

The taller of the two sitting men nodded approvingly as he brought the old expensive bottle and three glasses conveniently stashed away with it, to the table. He quickly poured a shot for each. They raised their glasses.

“This is the good stuff. Cheers!”

Grimm only nodded. The whiskey went down like honey. Clayburn hadn’t been lying, this was the good stuff. He felt relaxed and a thought came to him – this endless rollercoaster of relaxation and tension, perhaps that too was a test? Grimm looked incredibly relaxed and Strom decided to try and do the same, adjusting his position in the chair to a more comfortable one. The man next to him was a legend – even Strom knew who Grimm was. Time and time again, Grimm broke the back of Lodestar forces until nothing was left of them. He and his men took everything from them: their vehicles, their cash, before disappearing into the east. Breaking the back of a man was easy, but breaking the back of a corporation, now that was different.

Grimm and Clayburn were a strange match, Strom thought. Grimm and the rest of his outfit had been known to hate corporations – for him, Clayburn had to be the devil incarnate. And yet...

“Sorry sir, I was just thinking.”

“The Seahawks stole the ship. When it appeared on their radars, your men at the sea, they had to know it was them.”

“Of course they did,” nodded Clayburn.

“Why did they not stop them immediately? This was the third chance in a few days to stop the whole waste of resources. Instead, the Crimson Reavers received a new commander,” he nodded at Grimm, who eyed Strom calmly, his face never betraying a single emotion.

“And then you followed them, landing almost exactly where they did… two weeks after. How is this possible? You knew immediately where they would go, didn’t you?”

“Not immediately, but as soon as they truly decided.”

“So you had a spy in the outfit? No other explanation.”

Clayburn nodded for the third time.

“In a manner of speaking.”

The first hours spent on American soil were hours of wonder. Few of them had set foot in real badlands before. For them it was a myth – and myths come in many forms. A tragedy perhaps, painted by the masterful strokes of Clayburn Industries propaganda like a brush, depicting the horrors of sickness, starvation and war in vivid colors. Only the tools of professional liars could deliver such mastery.

For others, the myth was a take on legendary heroes protecting the poor from evil that left corporations steadfast and unrelenting, never wavering, even when facing annihilation at the hands of a vastly more powerful foe.

The truth, as it often is, was somewhere in-between. With reality washing away the thick layers of misconception and prejudice, the Seahawks had found Jacksonville to be remarkably ordinary. Gone were the days of high-tech corporate gadgets so popular in the walled Clayburn compounds. The streets were run down despite the visible efforts by the locals to give them a semblance of their earlier luster, yet underneath the grime of years of disrepair, the city was bustling with life.

All kinds of services and items were suddenly available to the Seahawks. Some – such as personal cars – had only been available to corporate officers back in europe, while others had been outright illegal inside corporate-controlled zones. Thousands of smells drifted through the air. The smells of food being prepared mingled with burnt gasoline, as dozens of shops and decades-old vehicles dotted and cruised the streets. The world was reverting back to its old ways, reaching out to technologies that withstand the test of time. The electric madness of the 2020s had been left to rust in great heaps behind each city, the toxic spill from their long-dead batteries contaminating the ground for centuries to come.

Fuel, the lifeblood of this new world, flowed from the south to feed the unending hunger of what was left of American industry. Few in Jacksonville would openly admit it, but it was this flow that allowed the city to survive, locked in an endless symbiosis with “government oppressors.”

What impressed the Seahawks the most was the freedom. No ever-present cameras, no watchful gaze of a faceless drone analyzing every move, reading credit receipts to ensure that cholesterol did not go over a limit determined by the cold mind of an artificial intelligence deep within the bowels of an ex-military bunker thousands of miles away. Instead, a basic, thriving economy that had returned to its roots.

The United States differed from Europe in a vast number of tiny ways that left the Seahawks, who were not born there, with an uncanny feeling. Familiar things had wrong shapes and familiar shapes belonged to the wrong things. This myriad of details assembled together into more of the surreal feeling the men and women of the unit were so familiar with. Africa had taught them this. They had little time to mope as the unit commanders, with Blackwood in charge, kept them busy recruiting. By the end of the week most of the bars and other places frequented by the local Fighting Falcon mercs were visited by the Seahawk people. Offers of the rest of their meager resources in exchange for services were made in large numbers. For a few, the Seahawks were a welcome distraction from the grinding boredom of a cease-fire with the pro-government forces that patrolled the area to the west. Others joined because of this forever dullness fueled their lust of adventure. Most locals however, eyed the Seahawks with suspicion, aware of their corporate past and their deeds in Sinai. By the time the Seahawks departed, their ranks were bolstered by only a dozen, men that stuck together, unwilling to mingle with the old crews.

The hunt for replacement vehicles was another matter. Jacksonville was a trade hub and the war with the government had left the mercenaries with more salvage than they could possibly use in a lifetime. Rows of armored vehicles were parked outside the city, mountains of spare parts and gallons of fuel waited silently for their future owners. It wasn’t first rate stuff – the best pieces had been taken by the Fighting Falcons, but what was left was good enough for the final leg of the Seahawk’s journey. And, fortunately for the Seahawks, the traders were willing to sell after several of the Seahawk crews patrolling north of the town help to fight off an ambush…

“Those weren’t federal troops. Did you see that Abrams leading them? It had skulls and teeth all over it. Those were mercs trying to sneak into the city! I say we go after them and kick their butt!”

Blackwood calmly regarded Grey – he could see that she still was high on adrenaline, blood pumping from the action that took place two hours ago in the outskirts. He propped himself against the wall and took a few seconds before answering.

“Calm down, Kate. We already won. You saved a few local boys, they’re happy as they can be. Hell,” he added with an impish smile, “I’ve seen more than one of them eying you after what you did. No need to be lonely tonight, if you get my meaning.”

He could see Seagrove giving him an angry look across the room but decided to ignore him. Their discussion was interrupted by the fourth person entering the room – one of the maintenance chiefs. Blackwood couldn’t remember his name, but luckily for him, Seagrove did.

The man was covered in grease and looked tired. Before answering, he grabbed Seagrove’s glass of beer standing on the nearby table and emptied it with one gulp. His hand left black marks on it. Sighing, he turned back towards them.

“Trouble, boss. Me and the guys finally inspected the rest of our stuff and it’s bad. Our tanks, they’re almost done. They have a few miles left in them, sure, but most are ready for a full overhaul. I’m talking about fully equipped facilities. The last time I saw those, we were still in England. We did what we could, but...”

All of them frowned, but he continued.

“But that’s not the worst part, boss. The junk they have here – sure, there’s a lot of it, but most of it is in the same condition or worse. Saw a few Sheridans, those might be workable. But that Stingray we were eying earlier? They dragged it from Thailand or something and they had to have it stored for a decade. Somewhere salty. It’s all rusted. The captured Abrams tanks are junkers too. Looks like the feds have been skimping on maintenance. In short,” he concluded, “we’re screwed.”

Silence fell like a blanket over the room with each thinking of what to do. It was Grey who raised her head first.

They all got into her jeep and drove west through the city. It was late but the streets were still brimming with life – they had to honk the horn a few times to get through and once they had, avoided what looked like a large-scale street-fight. They passed the Fighting Falcon mercs running towards it to break it up and finally reached their destination, the old Amtrak station in the north-western part of the city.

It was mostly a pile of rubble now with overgrown trees obscuring much of the area, but the goal of their trip appeared in front of them almost immediately.

“Damn, ain’t she a beauty, boss,” exclaimed the maintenance chief, wiping his forehead with his equally dirty sleeve.

“Do you think you can get her running?”

“We can try. Looks like she hasn’t been used for a while now. A decade, maybe. But these things were built to last.”

They quietly stood there for a while, looking at the massive locomotive and piles of heavy-duty wagons, standing silently in the middle of the near-abandoned rail yard. They could feel the eyes of some of the poorest citizens of Jacksonville who lived in the ruins upon them, but nobody stepped into the light. They knew better than to provoke mercs.

After a brief close-up inspection, the maintenance chief nodded to himself.

“Alright,” concluded Blackwood, “I’ll talk to the city commander, but they clearly have no use for it anyway. Looks like we just got ourselves a ride.”

We are happy to announce the conclusion of Episode 4 of the Storyline Campaign Season 1. 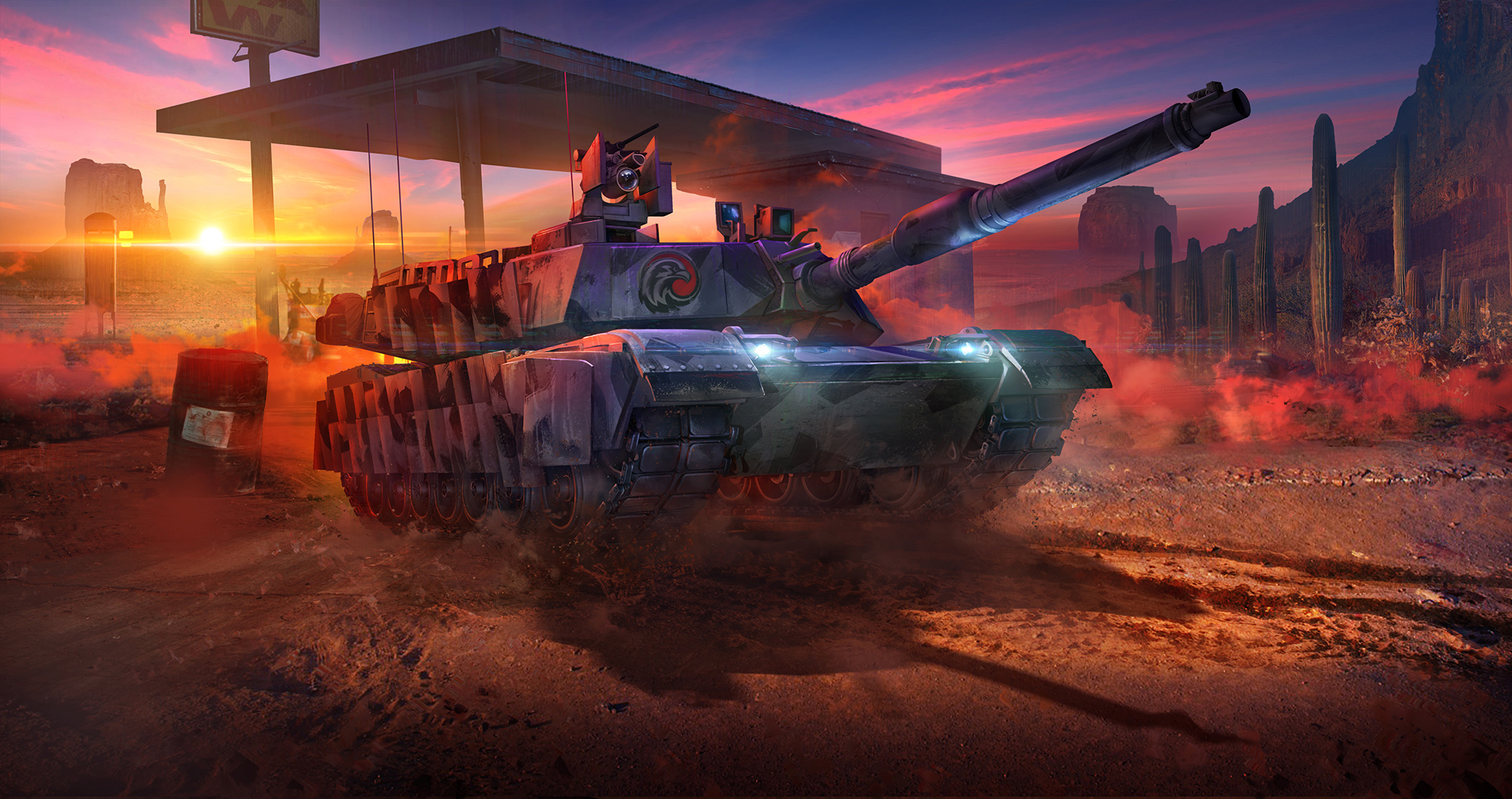 2110 players have successfully completed two out of three objectives of this episode and achieved the “Episode 4 completed” status, of which 1855 played on the EU server and 255 on the NA server, winning the Episode 4 reward commander, Kathryn Grey.

The Bonus Objective and the Storyline Status update will follow in the near future.

Episode 5 is due to start later in December.

Learn more about the wild and untamed commander of the Seahawks!