It’s been a difficult time for the Seahawks, attempting to take the Al-Arish base and secure the resources they needed for the journey west. Upon their arrival to Egypt, Blackwood separated the dwindling Seahawks into two parts.

The first part, led by Adrian Blackwood himself, headed out for the Al-Arish base, using the info provided by Ibrahim.

Result: Seahawks attacking the Al-Arish base suffer no losses

They assaulted at dawn. The attack took the light Suez Incorporated units defending the area completely by surprise. Suez Incorporated officials, clearly not expecting their ambush in Cairo to fail, did not warn any corporate outposts in the area of the Seahawk threat, allowing Blackwood’s forces to overrun the entire area, capturing intact water and fuel caches in the process. Seahawk casualties were light – several armored vehicles were damaged and a dozen men and women lightly wounded. The local Suez Incorporated forces were completely routed, either making a run for it or giving up as soon as the shooting started.

The prisoners were rounded up and, seeing no purpose in keeping them, Blackwood had them released after several days with just enough supplies for them to not die on their way back to civilization. Several ineffective Suez Incorporated attacks were repelled during the weeks that followed but it quickly became clear that the corporate security forces, consisting of light infantry and several older armored vehicles, were no match for the Seahawk veterans. A small number of Suez personnel, sick of the corporate world, even decided to stay with the Seahawks and help the preparations.

The second part of the Seahawk forces, led by Kathryn Grey and Joshua Seagrove, tasked with scavenging enough supplies to allow them to make the journey west, fared differently.

Result: Faction ratio 66:34 – Decisive Victory for Kathryn Grey, the voice of Joshua Seagrove is greatly diminished, resulting in a significant shift towards one philosophy or another. Joshua Seagrove status: unhappy

From the first day, it quickly became clear that Kathryn Grey’s ruthless tactics would prevail. Driven by her “by any means necessary” creed, she paid no heed to the needs of the locals and almost always resorted to the use of force after what she perceived as “failed negotiations”, never giving more than an hour or two to the inhabitants of the villages, old military installations, supply stations and other places she found in the desert based on Fyodor Sokolov’s info.

Joshua Seagrove operated independently at first; always attempting to convince the locals to make some sort of trade, but Kathryn’s reputation of brutality soon preceded his attempts and he quickly found himself dealing with hostile, suspicious people, seeing him as a member of just another corporate task force sent to cleanse the region of “undesirables”.

One such case almost ended with a disaster – upon reaching the settlement of Al-Rayasan, the Seahawks under Joshua Seagrove found the place seemingly deserted. Carefully approaching its perimeter, the Seahawk armor was ambushed by a considerable mercenary force hiding amongst the village’s houses. Were it not for the timely intervention of reinforcements from the contingent of Kathryn Grey, the battle would have turned into a slaughter. In the end, the mercenary forces were repelled but the price of high – ten Seahawks were dead and the unit lost two of its precious Strykers.

The increased amount of hostility eventually forced Joshua Seagrove to abandon any attempts at diplomacy and join Kathryn Grey in her endeavor. After another week, negotiations were not even attempted anymore with any armed people automatically being treated as hostiles. The supplies were gathered but at a terrible cost – the entire region turned hostile to the Seahawks and several supply trucks were ambushed, diminishing the already low Seahawk resources even further.

But as it turned out, angry mercenaries would become the least of Seahawk’s trouble...

We are happy to announce the conclusion of Episode 2 of the storyline campaign.

3102 players have successfully completed this campaign’s objectives and achieved the “Episode 2 completed” status.

Kathryn Grey dominated in Objective 1, resulting in a 14 days of Premium Time reward for all 2961 players who joined her and played at least 40 battles during the event. This represents a clear victory, but also a shift towards more brutal tactics, the consequences of which the Seahawks are yet to feel.

Joshua Seagrove lost and his influence on the events that were to come was diminished, although he’s about to make one more push for influence in an attempt to dissuade Grey and Blackwood from this path. The 1357 players who joined him and played at least 40 battles during the event will be rewarded with 7 days of Premium Time.

Objective 2 was completed by 1445 players and Objective 3 by 3041 players. Since some players completed both objectives, the Seahawks passed the Objective 2 check and incurred no additional losses during the episode, resulting in no increase in Episode 3 difficulty.

Additionally, 194 players have managed to secure total victory, completing all three objectives and receiving the biggest reward of the episode – B1 Centauro 120 Wolf Tier 9 Premium Tank Destroyer (or 5,500 Gold if they had it previously) and the “Episode 1 completed” status (if they did not have it previously). 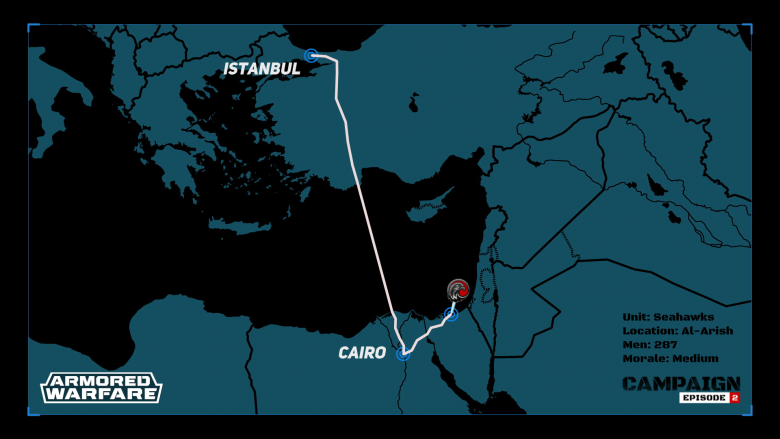 Episode 3 is due to start in September, but until then, the Seahawks will have some tough decisions to make...