We’re almost at the end of our list of the Rise of the Dragon Battle Path rewards. The final block of rewards will be dedicated to Modern China. 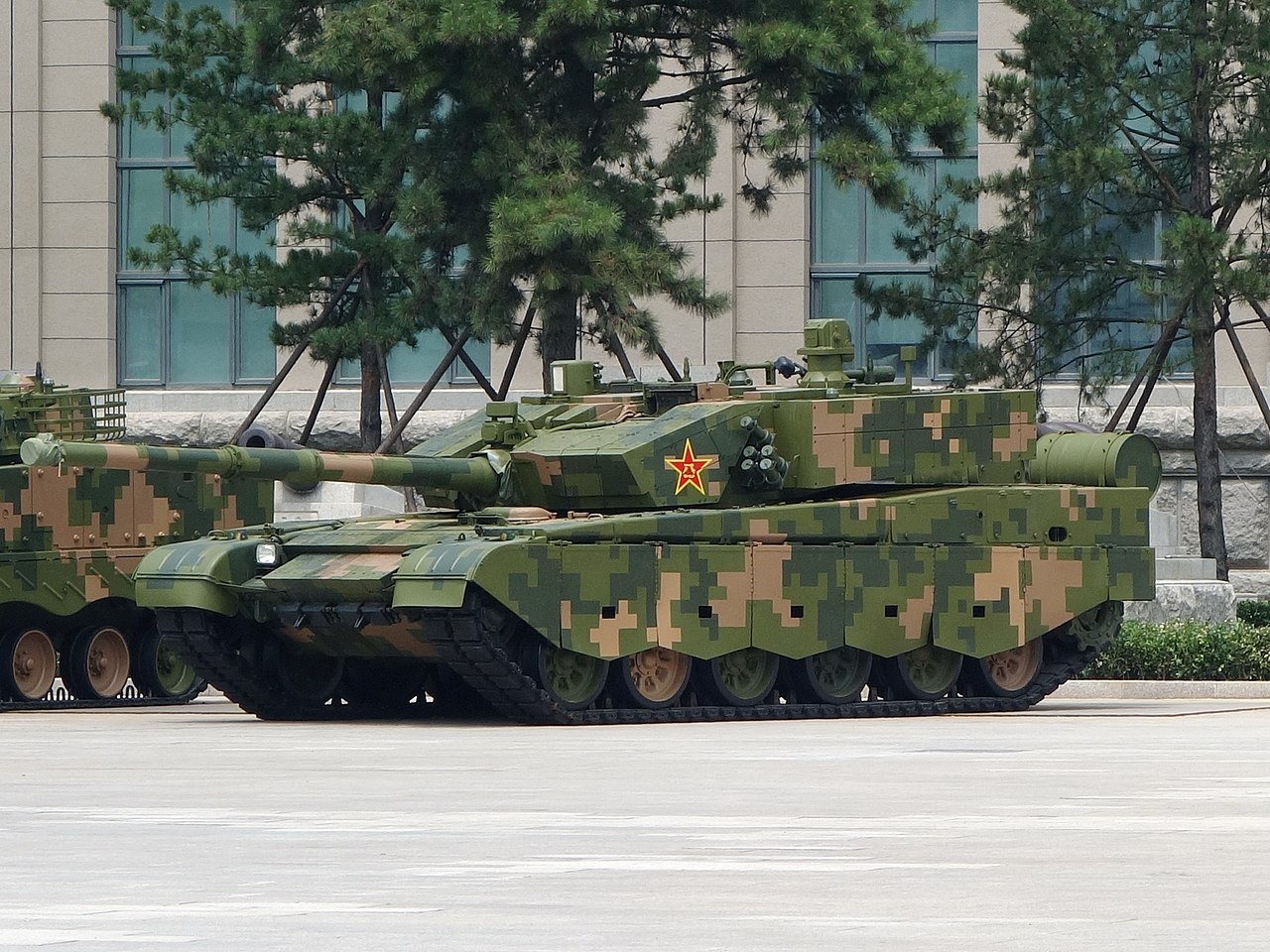 Throughout the 1970s and the 1980s, China rose as major power in the east, turning its once numerous but poorly equipped military into a force to be truly reckoned with. Nevertheless, at the end of the 1980s, most of its tank fleet comprised of various upgraded Type 59s which were quite obsolete at that point. That was a lesson the entire world would learn with Operation Desert Storm.

Today, we tend to look down upon the Iraqi army given the results of the 1991 and 2003 wars but in the early 1990s, it was large (one of the largest in the world in fact), well-armed and relatively well-trained. Emphasis on the world relatively – we all know how the confrontation with the United States-led coalition went. 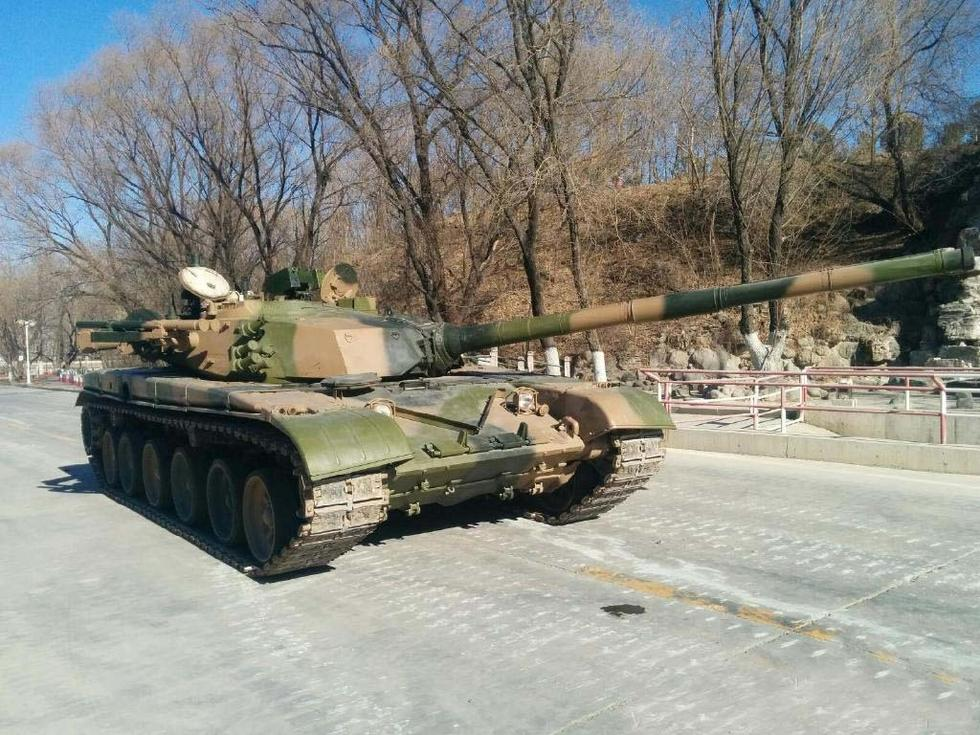 In armor terms, the conflict caused a deep shock in both Russia and China. Russia had its own problems at that point, trying to hold on to whatever Soviet legacy it could. But for China, the matter was urgent on another level. The Chinese experts knew – as they know now – that if the land of the dragon was to rise to the level expected by its leadership, a confrontation with the United States of America would be (and still is) all but inevitable. 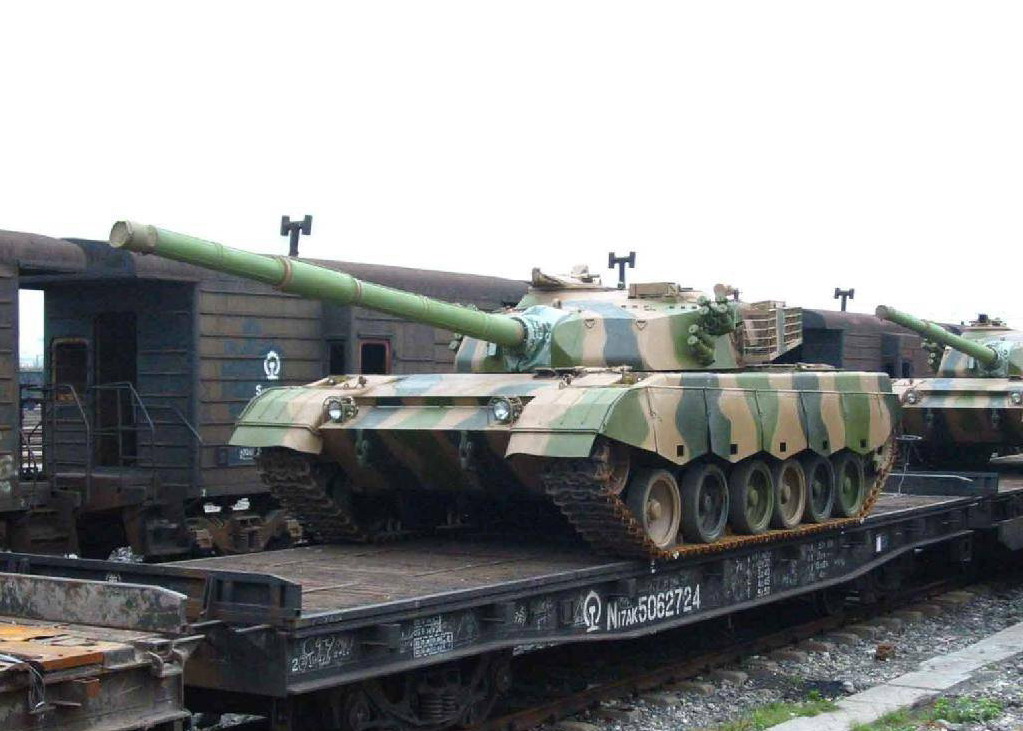 And so the Chinese went to work re-arming their juggernaut of an army. Luckily for them, the 1990s were a tumultuous era for Russia with pretty much all its advanced equipment available on an open market. The Chinese were able to acquire and reverse-engineer all sorts of armored vehicles, including the BMP-3 series, which gave birth to China’s modern ZBD-04 IFV. The T-72 was known to the Chinese by that time already (they imported it from Romania in the 1980s) but the advanced electronics and optics of its later models were also a welcome addition to China’s research programs, as was the ammunition and engines. 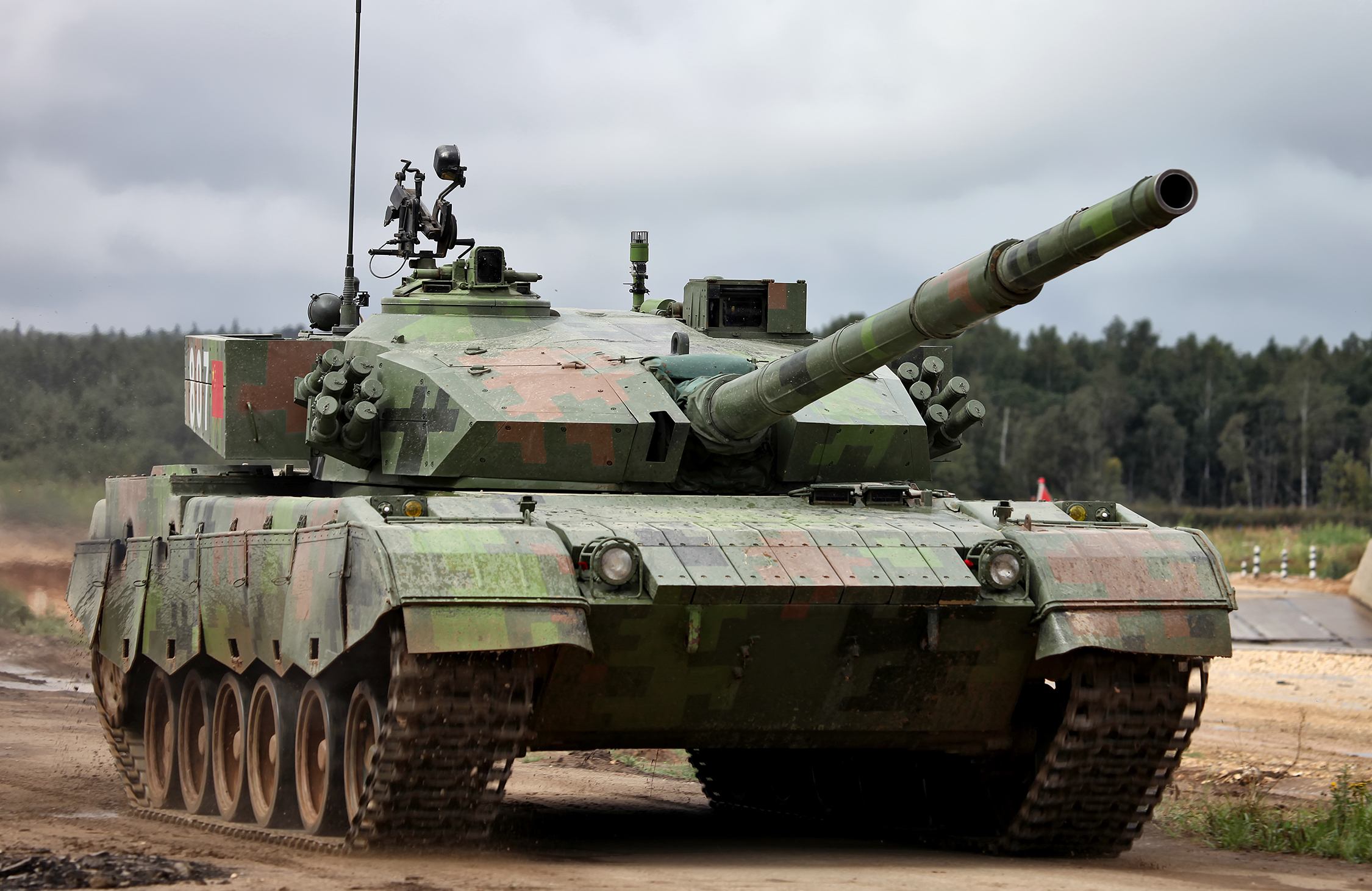 The first operational and mass-produced modern MBT was the Type 96 from 1997 and its successor, the Type 96A that came after it as an upgrade. This tank was built using the older Type 85-IIM export model from the 1980s since that was the best platform available to China at the time. Over 2000 were built between 1997 and 2005 with roughly one half of them (1100) being later upgraded to the Type 96A standard. However, the Chinese had to wait for their first true third generation tank until the introduction of the Type 99 MBT, which was, as its name suggests, unveiled to the public in 1999.

In the 1990s, the Chinese MBTs were already factory-painted with camouflage and one of the most common patterns was a variant of the three-tone camouflage used earlier. The first prize of this segment is therefore the Modern Stripe camouflage. 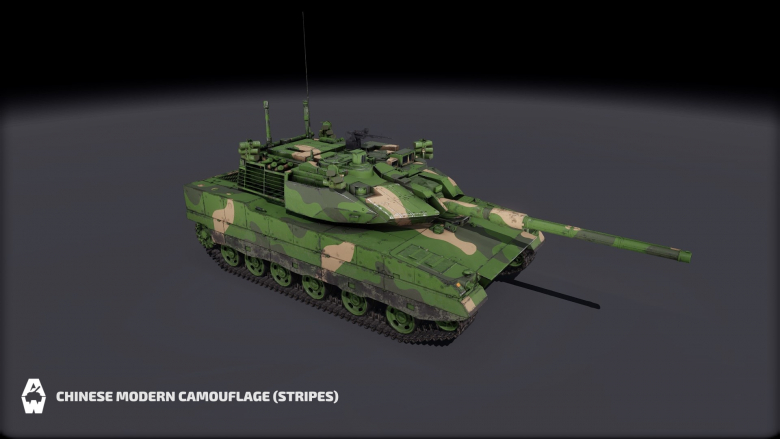 This camouflage consists of yellow, light green and dark green stripes and will be, as usual, available to all environments.

The Type 99 was a game changer for the People’s Liberation Army, the first truly modern MBT. It entered service at some point between 1999 and 2001 with the initial vehicles painted using the same camouflage described above. Given the vehicle’s importance, we have decided to introduce one more version of this camouflage as a special fitted skin for the Type 99 MBT called Type 99 PLA. 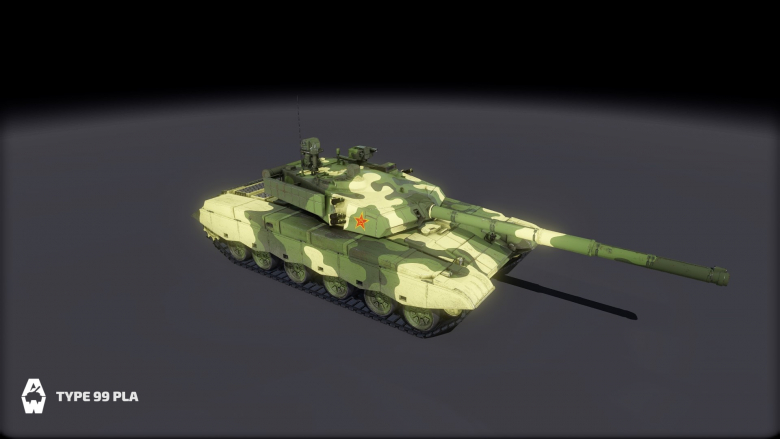 Aside from the camouflage, the skin bears the PLA star symbol and several smaller details were added. 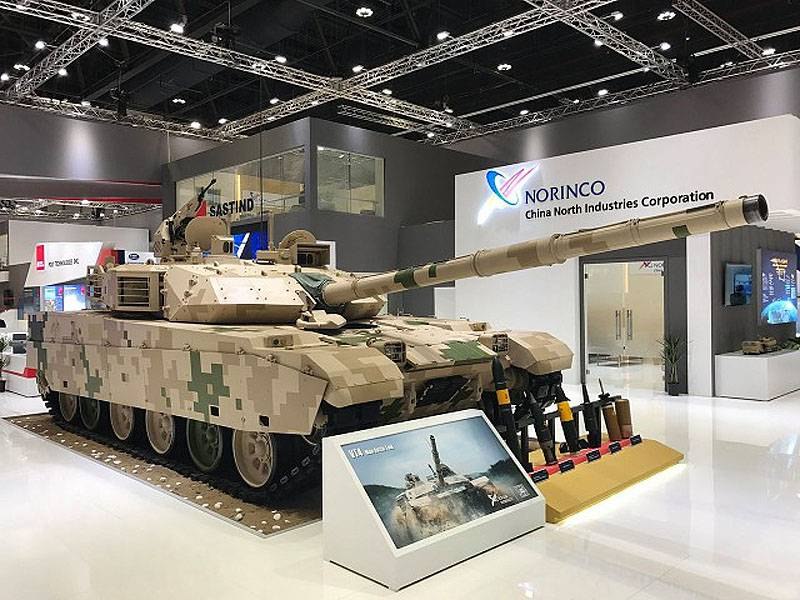 As of now, most modern Chinese armored vehicles (and not just those) use digital camouflages. These started to appear after the turn of the century and are now used pretty much the same way U.S. Lt. Col. O’Neill devised them in the 1980s. Interestingly enough, while this seems to be the standard for the Chinese, for the Americans it is not.

The Type 99A MBT, an improved version of the Type 99, typically only appears with a digital camouflage (or the older striped one mentioned above) and several such Chinese digital camouflages are already present in the game. In this Battle Path, we’ll be introducing two more variants of the same camouflage.

The first is a rather standard Digital camouflage that appears on multiple various vehicles. The exact idea behind this pattern is unknown. It’s most likely connected to the arid regions of China such as Inner Mongolia because it was used on various export vehicles presented there to potential buyers. 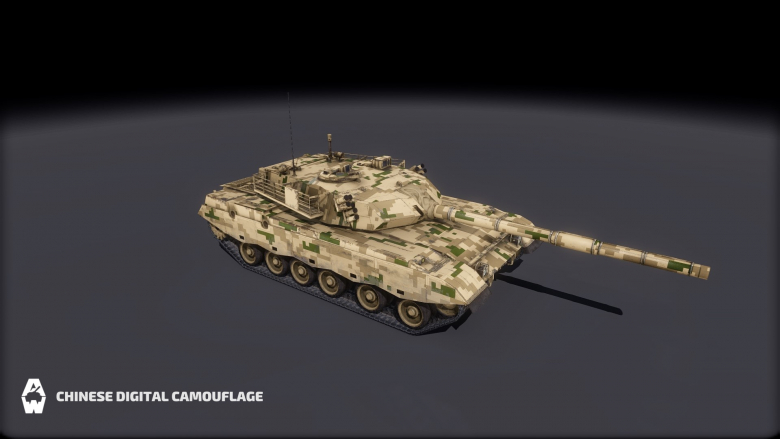 The next camouflage is a Desert Digital camouflage one and this one is definitely intended for China’s desert and mountainous areas. Especially the borders with India (the contested region of Ladakh) are lately a hotspot with hostilities flaring up every now and then – so far, thankfully, without any serious escalation.

And, last but not least, we’d like to tell you about the final camouflage from this Battle Path, the Winter camouflage. The name says it all, although unlike the previous two, this camouflage is not of the “digital” type. Instead, it’s one of the older spot patterns with some of its colors covered by an improvised layer of white. 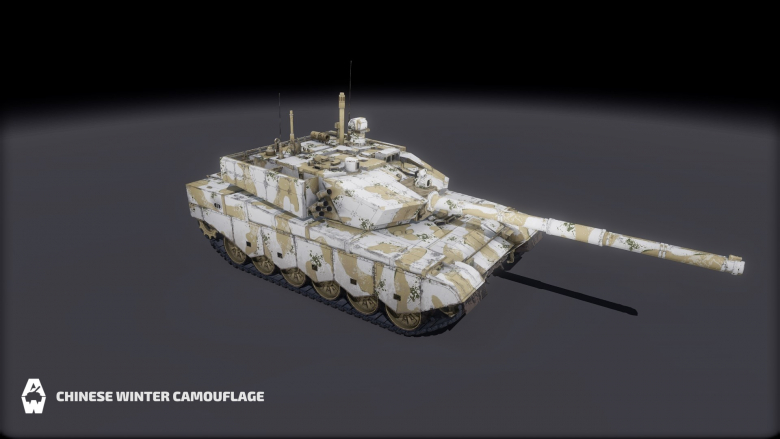 Since the early 2000s, China’s military has been undergoing several rounds of reforms and reorganizations, including the most recent one from 2014. These reforms are at least partially based on the western militaries, specifically the U.S. Army, China’s largest political and potentially military opponent. This can be seen in a number of aspects:

And much more. Geopolitically, China is surrounded by potential enemies. To the north, Russia with its vast Siberian resources, a prime target for Chinese expansion that is already taking place (only not in the military sense). Chinese investments have already secured large portions of Russia’s vulnerable eastern part. The fear of a Chinese military intervention is the main reason why Russia has adopted a strategy where any such incursion would be met with tactical nuclear weapons. 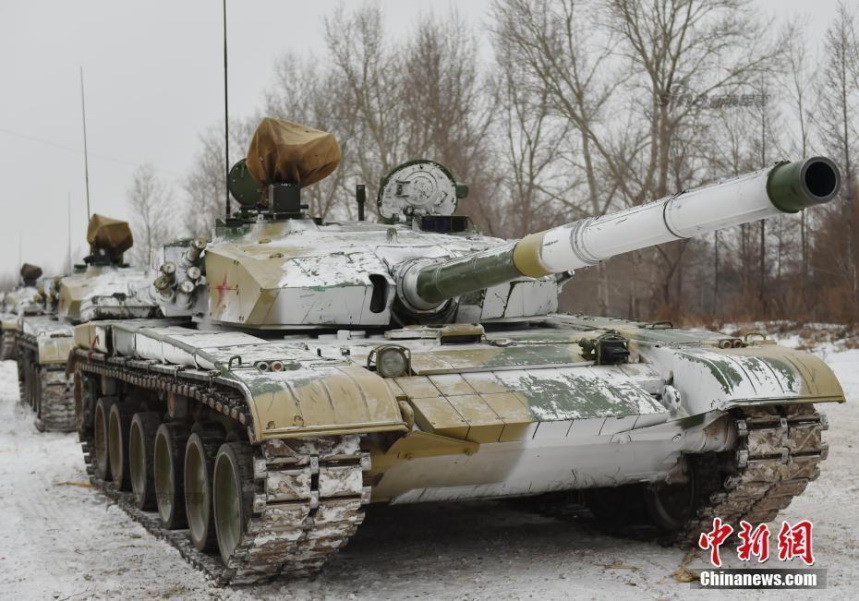 To the south and west, China’s strained relationship with India makes the border a prime hotspot. However, the mountainous terrain of the region limits any heavy armor movement and it is for these conditions the ZTQ-15 Light Tank was designed for. India, while interested in Russia’s Sprut-SD, has yet to respond to that particular threat.

And, finally, there’s the question of the South China Sea and Taiwan. China’s been steadily building and upgrading its naval fleet to rival that of the Americans. With a conflict looming on the horizon, China’s goal is clear – to be ready for anything.

And that’s it for this Battle Path’s prizes, commanders. In the next and final article, we’ll discuss the mechanical changes to the Battle Path that we hope you will like. Not to worry, the Battle Path is coming in the near future.

We hope that you’ll enjoy the event and, as always:

The access to the upcoming Rise of the Dragon Battle Path is now available with a discount!