Menu
Play now
Engesa (an abbreviation of Engenheiros Especializados S/A) is one example of how even a large and well-known company can completely vanish from the market in a very short time. In its heyday, the company was actually one of the largest armor producers in the world – but the "golden times" were followed by fast decline and a bankruptcy that the firm never recovered from. So, what actually happened?

The company was founded in 1963 and its primary tasks were to repair and modernize Brazilian armor and trucks. One modernization it became famed for was the conversion of regular 6x4 and 6x2 trucks to 6x6 in order to increase their mobility in rough terrain. 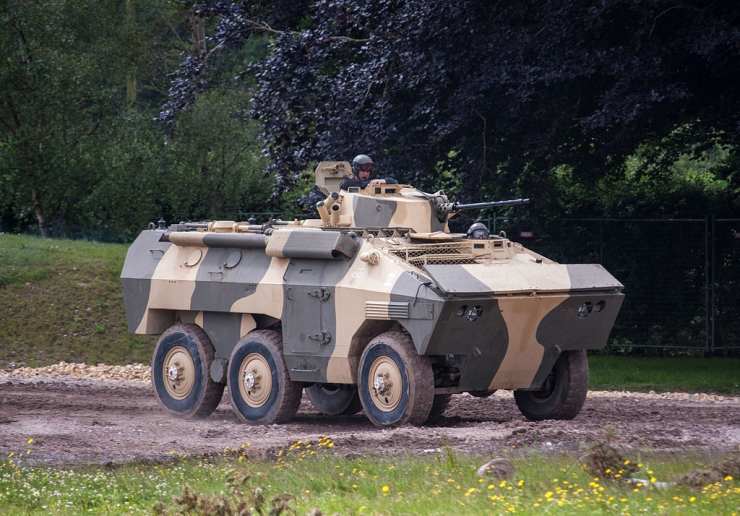 In 1970, the company started its own armor development of a family of 6-wheel armored vehicles, one of them being the EE-11 Urutu APC that could carry two crewmembers (driver and commander) and 12 troopers (or cargo – the infantry seats could be easily folded for that purpose). The vehicle was powered by a 260hp 6V-53T Detroit Diesel engine and was actually amphibious. It was essentially only protected against small arms fire and smaller HE shell fragments but for its role and weight category it was quite adequate. Overall, it was a very successful design with multiple versions (carrying all kinds of weaponry from a simple .50 caliber machinegun to 20mm and 25mm automatic cannons, there was even a 90mm fire support version). It was produced from 1974 to 1987 and was not only used by the Brazilian army (around 700 were ordered and they are still in service) but was also widely exported, mostly to other South American countries and to Africa where it saw combat in several conflicts.

Another successful Engesa product was the EE-9 Cascavel (Rattlesnake). The Cascavel – while it was closely related to the Urutu and both vehicles shared many components – was not an APC but a mobile, wheeled fire support vehicle. The entire region (especially Brazil) is known for its creative use of obsolete technologies so it is no surprise that by the time the Cascavel was actually introduced, the Brazilians were still using the vintage WW2-era American M8 Greyhound armored cars they received when the Brazilian expeditionary force fought in Italy with the Americans. The Cascavel was to replace these venerable vehicles. Unlike the Urutu, the Cascavel had somewhat thicker armor (16mm of steel armor compared to the Urutu's 12mm), but even with this increase it was hardly a match for anything heavier. However, the Cascavel was not relying on its armor, – the vehicle’s main features were speed and firepower. The original Cascavel (Mk.1) was armed with only a 37mm gun, but the Mk.3 version already carried the French 90mm D-921. With such an armament, the Cascavel could take on a wide variety of targets including lighter enemy armor. The ultimate armament came in the Mk.4 version in the form of the 90mm EC-90 gun (license-produced Cockerill Mk.3). Like the Urutu, the Engesa Cascavel was not just adopted by the Brazilian army (it is still in service in a modernized form), it was also widely exported to several countries with the largest orders being placed by Libya and Iraq (few of those vehicles have survived the conflicts in the region). 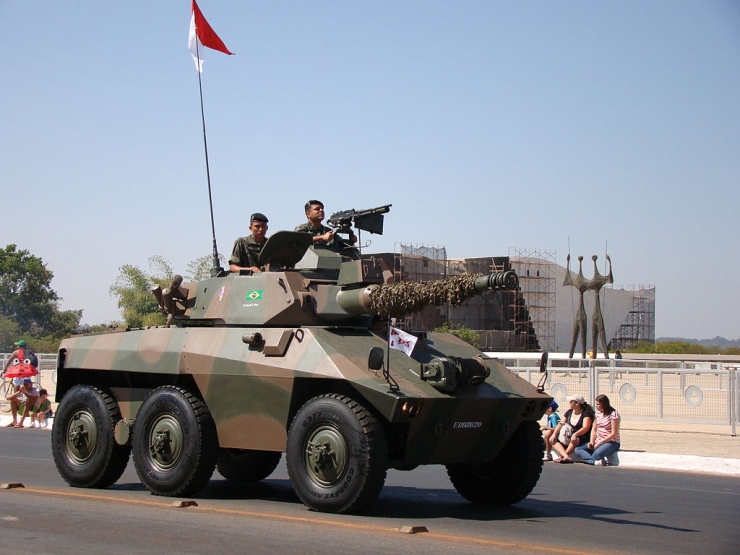 The success of both of these vehicles and their variants made Engesa profits skyrocket – the Brazilians came to the same conclusion as the South Africans: there was definitely a market out there for relatively cheap but effective vehicles with solid firepower and mobility.

Engesa's third interesting project was the EE-3 Jararaca (named after a local breed of pit viper). It was a four-wheeled very light recon vehicle. The EE-3 Jararaca was designed a while after the two abovementioned designs (at the end of the seventies) because it turned out that for some recon missions the Cascavel was simply too heavy and pointlessly over-armed. The army needed something the size of a jeep but with armor. The result was a 6 ton armored car with light armor (protection against small arms only), equipped generally with only very light weaponry: versions with .50 caliber machineguns and 20mm autocannons are common, but there are also some variants with anti-tank guided missiles. Mass production of the Jararaca started in 1980, but after a series of trials the Brazilian army actually didn't accept it into service. Engesa was not too worried though because the Jararaca became a very popular export item like its two big brothers. In the seventies and eighties, the Brazilian army bought around 1300 armored vehicles from Engesa and 2000 more were exported to other countries – especially to Arab states and Africa in general (Libya, Tunisia and Iraq became the largest buyers). In just around a decade, Engesa grew from a smaller local company to a worldwide arms producer. 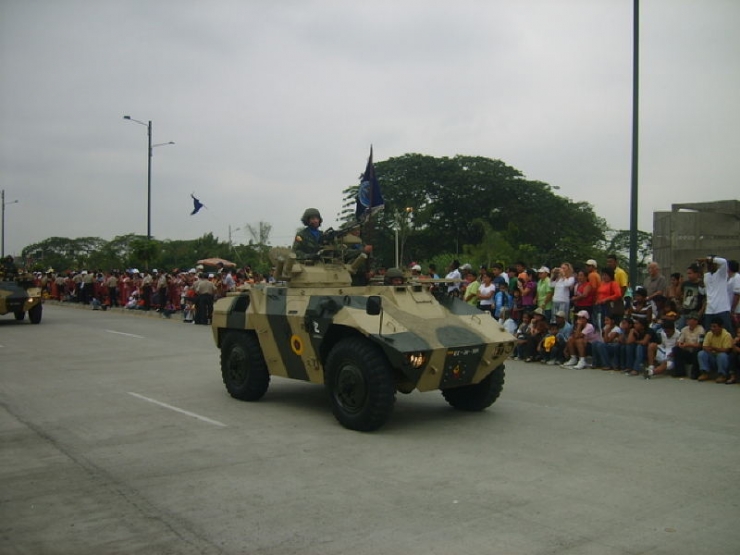 This wild success naturally inspired Engesa to produce more interesting designs with the hope of selling them on the export market. While the Cascavel had sufficient firepower, it was not a real tank killer. So Engesa produced the EE-17 Sucuri, a wheeled tank destroyer armed with a French 105mm automatically loaded gun in an oscillating turret, a combination that worked well on the AMX-13 light tank. The project was further modified to produce the EE-18 Sucuri (sometimes known as Sucuri II) with an Italian OTO Melara 105mm rifled gun, capable of firing standard NATO ammunition. Another project of that time was the EE-T4 Ogum light tracked vehicle family (with multiple variants of armament). Both the Sucuri and the Ogum were widely advertised from the mid-eighties to the early nineties, but bad times were on the way for some arms companies as the market was getting flooded with Russian equipment, which became available in extremely large numbers after the fall of the Soviet Union. The old Soviet vehicles were often not as good as other products around in their basic versions, but they were very cheap and Engesa began to feel the pressure. 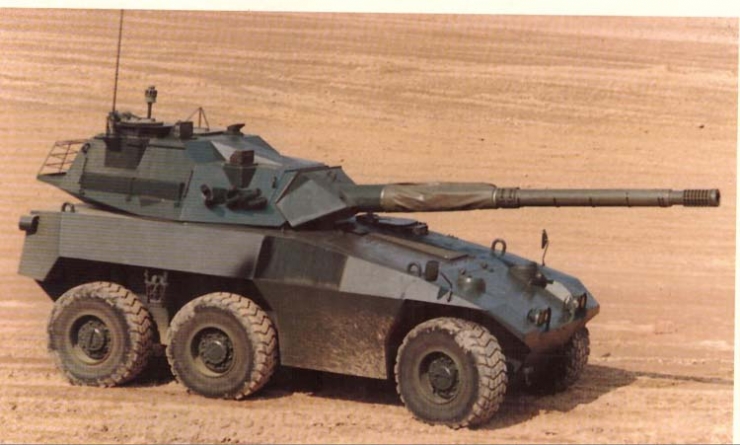 The company's fall, however, was not just down to the Soviets – it was facilitated by an over-ambitious project, the Osório main battle tank. It was to be the most complicated project for the company yet – perhaps too complicated some said even back then. But the company was riding high, exports were going well in the early eighties and the fall of the Soviet empire was still just a pipe dream for many – what could possibly go wrong?

The main raison d'être for the tank was the (correct) idea that third world nations could use something more rugged and (most importantly) cheaper than the expensive western equipment. Western tanks were simply too complex, heavy and pricey but something smaller, simpler and yet capable of fitting into the main battle tank category could be a success.

The development was fraught with issues but the first prototype was introduced to Saudi Arabia in 1985. It was a very conventional tank armed with the reliable Royal Ordnance 105mm L7A3 gun – for the second prototype, however, this weapon was already replaced by a GIAT 120mm smoothbore. The tank was quite customizable – various systems could be installed if the customer wished so, including a wide range of fire control systems, ballistic computers and other sophisticated devices. Despite the intensive advertising, no buyers were interested and not even the Brazilian army bought the tank. It turned out to be a massive flop. 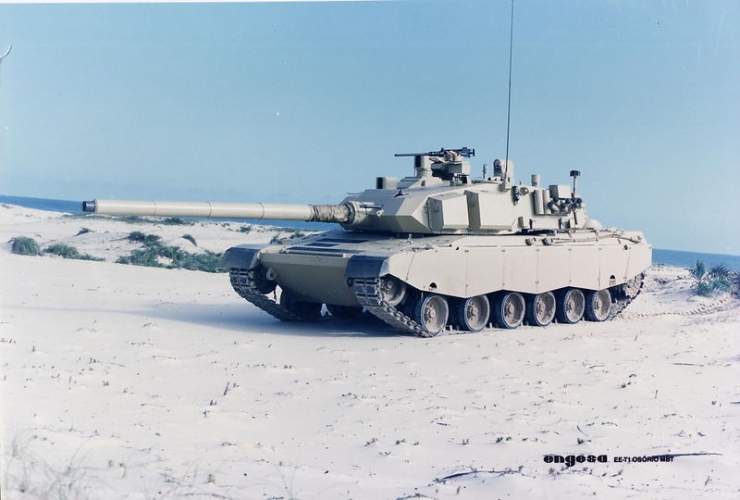 But that was not the only element of the equation, another was the specific market dependency. Engesa was never a leader or an innovator – it always used various proven solutions and modules (the only truly interesting idea was two-layer steel armor, an attempt to increase protection without increasing weight). Engesa's goal was to make as much money as possible from export contracts and as such it focused on building vehicles with a very good price to firepower ratio. Exports were mostly driven by South American armies needing to replace truly obsolete vehicles (some armies were using WW2 era vehicles even in the seventies-eighties) along with several African countries – notably Iran and Iraq. The Iran-Iraqi conflict was the driving force for effective armor demand – both sides of the conflict were desperate for affordable vehicles, while other countries in the region were buying arms preventively – just in case the conflict spilled over into the "neighborhood". The Osório and Ogum vehicles were designed specifically with the needs of this region in mind, but everything changed in 1991.

The Gulf War meant two things: the loss of the Iraqi market (as one of the biggest Engesa clients, the contracts lost were worth 200 million USD, roughly two one year budgets for the company) due to the American embargo and the loss of other markets in the region due to the alliance of several countries with the United States – such an alliance almost always meant the decision to purchase American equipment for such a low price and with a quality the Brazilians could never match.

It was also at this time that the market became flooded with the obsolete NATO and Warsaw Pact equipment and at that point even relatively modern vehicles were often available for their price in scrap. Engesa invested over 100 million USD into the Osório development and all that money was lost to the company. This combination of factors dragged the company into serious financial trouble that ended with bankruptcy in 1993. Most assets were gradually sold, including the main plant in Brazil - a sad end to a company that was once hailed as one of the largest commercial producers of wheeled armored vehicles on the planet.