Menu
Play now
As a part of the ongoing rebalance and game improvement process, we will be introducing the first update to PTS this week - the 0.7.1320 patch. This patch will be deployed at 11am PDT (2pm EDT; 20:00 CEST) on August 18th on the Public Test Server, but it is available for download right now. If your Public Test Server client doesn't download a roughly 190MB patch, try closing the My.com Game Center completely and re-opening it. This patch brings numerous changes to vehicle characteristics, as well as some bug fixes. 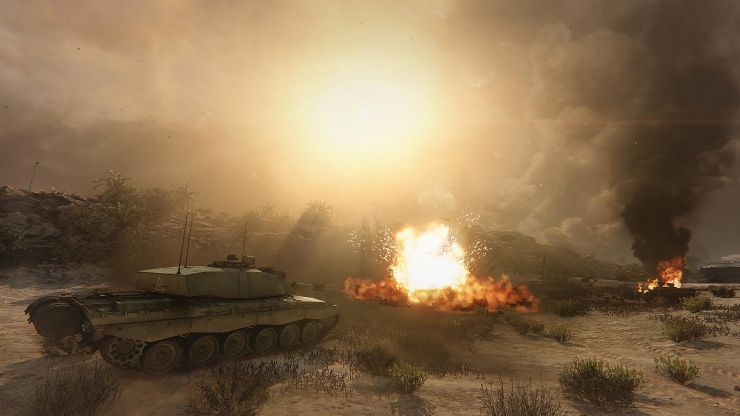 To encourage participation, a new high tier tank will be available just for logging in. This tank will only be available for one day, and will change every day. As an example: everyone who logs on to PTS on the 18th will receive a Tier 8 AFV "BMOP Ramka-99". This tank will continue to be available to you even after the day you get it, but you must log in that day to get it for free.

We will continue to unlock new high tier vehicles every day. In order to claim those vehicles, players have to log in on that particular day. Please keep also in mind that the reputation and credit income on the PTS server is 5 times higher than usual - it's very easy to unlock vehicles on the PTS server.

In order to provide you with the best experience possible, we need to know your opinions on the upcoming changes - please provide your feedback in the dedicated section and help us to improve Armored Warfare further!

BMD-1: The stats for this vehicle were very inconsistent with the design of the rest of the vehicles in its line. We've adjusted them to be more similar to the other BMD series vehicles, which should make the gameplay for the line more consistent and the BMD-1 more enjoyable to play.

Other BMD Vehicles: We've given the other vehicles in the BMD line a slight improvement in camo factor to represent their small profile.

BMP Line: Much like with the BMD line, the BMP line had inconsistent camo values. We've streamlined these to be consistent throughout the line (with the exception of the Ramka-99, which is functionally very different from the other BMP-style vehicles). The vehicles in the BMP vehicle chain are performing lower than average in terms of win rate and overall rewards. This especially true for the later vehicles in the line. In order to address this, we're giving them some much needed improvements. In addition, they will benefit from the global improvements to autocannons that we're implementing.

VFM5: With excellent close-range combat capabilities, the VFM's high camo factor was not appropriate for its role. We've reduced its camo somewhat to closer to average for light tanks.

M2 Bradley: While the Bradley's large profile for an AFV does justify a comparatively low camouflage rating, it's currently a little bit too low to play the vehicle's proper role effectively. We've given it a slight bump.

Begleitpanzer 57: Given its powerful firepower, the Begleitpanzer's current camo factor was a little bit too high for the vehicle's role. It's been slightly decreased.

T-Series vehicles: The later T-series vehicles (with the exception of the T-90, which is already doing well) tend to be slightly below average in terms of average reputation, win rate, and damage per match compared to other MBTs of the same tier. As such, we're giving them some slight buffs to help bring them into line. These buffs are primarily to damage dealing capabilities to help emphasize the line's specialization.

FV510 Warrior: Our previous changes have improved the FV510 Warrior's performance somewhat, but it's still somewhat behind in performance compared to other vehicles of the same tier. We've given it some significant improvements that should make it much more competitive.

PzH2000: The PzH2000 is performing poorly compared to the M109A6 in terms of damage dealt, overall match rewards, and win rate. It also doesn't line up well compared to SPGs of other tiers at the moment. To help bring it up to the standard of other SPGs and make it more fun to play, we're giving it a significant bonus to targeting time and accuracy.

FV721 Fox: The FV721's extremely powerful gun, combined with its high speed and mobility, has made it brutally effective for its tier. We want to make sure it stays fun to play and retains its current role, but we've made some minor reductions in its capabilities to diminish from its current superiority.

Wiesel 1: With fantastic speed, spotting range, and great weapon options, the Wiesel is currently performing considerably above average for its tier. To help bring it into line, we're decreasing its firepower a bit.

M1 Line Changes: The M1 and M1A1 are both performing below the standards of other vehicles of their tier. Part of this is due to issues with their armor thickness, which we'll be addressing in a separate change, but we dont feel that improving the armor will completely address their issues by itself. We've given them some other minor statistical improvements, and we believe that between these changes and the armor improvements they should be much more competitive and fun to play.

2S14 Zhalo-S: The Zhalo's fast rate of fire gives it an excellent DPM, but its low penetration has made its overall effectiveness somewhat low. We've given it another slight penetration bump, as well as an aim time improvement, to help make it easier to use.

AMX-10P PAC90: The AMX-10P PAC90 is doing great on dealing damage, but its poor spotting range has made it difficult to perform its role. We've buffed its spotting range significantly, bringing it up to the same value as the AMX-10P. This gives it above average spotting distance for a Tank Destroyer, which should give it significantly better overall performance. We've also given it a slight bonus to HP to improve its survivability.

Obsidian Entertainment and My.com are proud to present the fourth round of the Early Access testing that starts on August 13th, 2015