Born into a wealthy family of a neurosurgeon and a career diplomat in Espoo, Finland during the time of the dark days of upheaval, Alisa Korhonen had a relatively happy childhood thanks to the efforts of her parents. Her father, a kind but stern man, known for both his prowess and the air of authority that made him a natural leader, did his utmost to shelter his family from the riots, violence and food shortages that had been unleashed upon the once-peaceful country. However, the rapidly deteriorating situation forced the family out of the heavily-populated urban areas – with the cities reduced to anarchy, few had a use for a medical specialist. 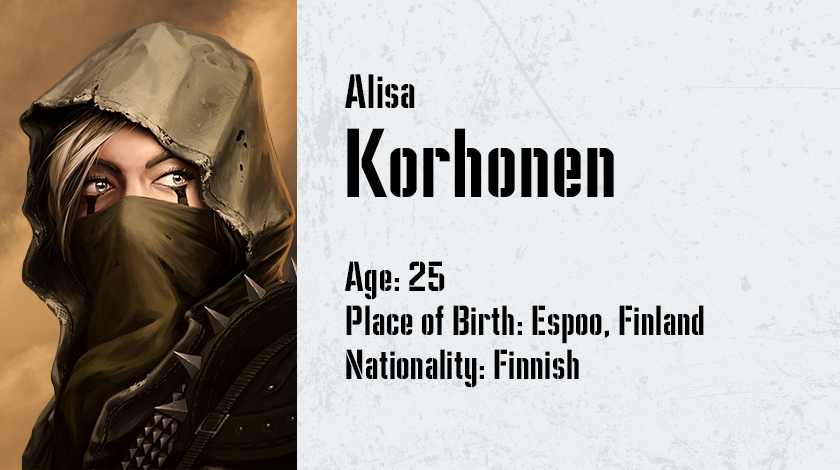 Fortunately, Andreas Korhonen had his hobbies to fall back to. He was an avid hunter and survivalist, having spent much of his youth outdoor. His skills with a rifle ensured that the family would never go hungry or had to fear for their safety. Eventually, they settled in Karelia and were amongst those who had founded one of many small communes of thousands of. The harsh weather in the region, combined with the indomitable nature of these new age settlers, prevented any big city trouble from reaching them and the family lived a quiet, rural peaceful life for almost a decade.

It was there that Alisa learned to hunt and he and her father, having spent many hours in the wilderness, grew very close. She quickly became a marksman without equal and, together, they formed a strong bulwark against any, who would do the settlement harm. Hunting and farming in the inhospitable northern wastes was a hard life, but Alisa adapted to it well, learning more and more from her parents over the course of her puberty, including the basics of chemistry and healing.

Little in the way of news from the rest of Europe found its way to the isolated Karelian villages, but, in the 2030s, rumors started to go around about a new, powerful corporate-backed force sweeping Europe, putting an end to the worst of atrocities all around the continent. One mild summer, a trading caravan finally arrived with good tidings – the capital of Finland, Helsinki, had been liberated by this organization calling itself the International Security.

After months of debates, friendly yet often lively to the point of rowdiness, the majority of the village, including the Korhonen family, decided to pack their things and take the journey south, back into the civilization and towards the promises of a new, peaceful world order under the benevolent auspices of the ISD. The organizations, now in control of all larger cities, issued calls for any refugees to return in exchange for security, jobs and the way of life just like in the old days before Europe fell apart.

And for a while, it seemed to even be true. Upon their arrival in Helsinki, the family received first shelter, than food and, finally, Alisa’s father once picked up the mantle of a neurosurgeon. His skills helped many an ISD soldier to recover from traumatic injuries and he would gradually become one of the most successful and sought-after experts in the field.

All that time, Alisa would look up to her father and would pick up a quest of her own to become like him and to follow in his footsteps. She dedicated her life to first studying and, later, the practice of medicine.

During those days, her father would be frequently sent on ISD missions all over the world. Alisa and he would not see each other for months, but they kept in touch thanks to the generous communications options, one of the many perks of working for the ISD. She became so used to regular contact with him and her mother, who had resumed her diplomatic career as a part of the ISD peacekeeping and mediation corps.

Only, one day, the call never came and her increasingly agitated attempts to find out what happened came up empty. As the days went by, she and her mother used every contact at their disposal and called in every favor they were owed to find out why Andreas Korhonen would so suddenly go silent.

The truth left them both shaken – the man had disappeared during a mission in the Middle East. To her dismay, the ISD was remarkably unwilling to divulge any more info or investigate the matter. Alisa suspected foul play – perhaps an incident took place that would cause the ISD a lot of embarrassment if it ever came to light.

But Lady Luck is a fickle woman and, in this case, she’d smile on both Alisa and her mother. Alisa was just starting her tenure with the ISD as a medic and, pulling whichever string she could, her mother would have her assigned to the Middle Eastern division. From there, her deployment to one of the worst hotbeds of insurgency was only a few phonecalls away.

For the several months that followed, Alisa was stationed in one of the ISD’s refugee centers as a doctor, spending all her free time asking both soldiers and locals (wherever her language skills allowed it) whether they had seen her father. It was during the final days of the tenure that she came across a sick elderly woman, who told her about a wounded man of matching description being rescued from raiders but left in critical condition. His state would not allow the villagers to bring him to the hospital and all their attempts to get a doctor to come with them were unsuccessful.

That night, Alisa would desert the ISD. Packing only a few things, she climbed out of her window under the cover of darkness, stealing one of the hospital’s spare vehicles and traveling dozens of miles across the largely hostile country. She reached the village described by the woman at dawn, frightening many of the inhabitants in the process.

The man she found on a bedroll in one of the clay huts was indeed her father, but, at first, she barely recognized him. Suffering from malnutrition, dehydration and sepsis, his skin was leathery and stretched like old parchment, his eyes looking feverishly through her as if she was not even there. Deep inside, Alisa knew even then that there was no helping the poor man, but her training would kick in and she started to examine him. Her attempts quickly unveiled the horrible truth – her father was shot and there was little she could do to help.

With the help of the drugs she brought with her, Andreas Korhonen became lucid and the two would get to talk one last time. He passed away later that day, the same day that Alisa Korhonen disappeared and someone else – something else – was born. That day, she vowed to make whoever had done this to her father pay. Her rifle, her skills and her charisma – all tools in her inventory. She would get her revenge, by any means necessary.

Alisa Korhonen is one of the deadliest commanders in the game thanks to her special unique ability to summon the support of the tribe she swore to protect in the form of her skill called Mysterious Stranger.

Whenever a vehicle commanded by Alisa damages an enemy vehicle, there is a chance that her ally from off the map will fire a guided missile that will swoop in from above and hit the same enemy. The more damage you deal per shot, the higher the chance of the Mysterious Stranger missile being launched. The incoming missile is guided to an extent, but its arrival will be announced to its target. It is possible to outrun it and make it miss – that, however, requires the targeted player to immediately start moving. The skill is therefore the most effective when used against slow-moving targets. The missile damage scales with Tier and the skill also has a cooldown.

In addition to this skill, Alisa has the access to a number of other skills, including the following bonuses:

And several others. She is a popular and universal commander, especially suitable (thanks to her skills that add extra ammunition) for vehicles with limited ammo supply such as the Kornet-EM. For an example build, please visit this page.

Offer: Warlords of the Wasteland

Learn more about the opportunity to obtain Commander Alisa Korhonen and the Altay Tier 10 Premium MBT during this limited offer!