The long awaited camouflage system has been added into the game! Players can now unlock various camouflage and paint options separately, which can then be mixed and matched to allow for greater customization of your vehicle. Players may purchase camouflage options through the customization interface in the garage for either gold or in-game credits, while paint is currently unlocked through completing various achievements for free. Please note that the achievements are retroactive - if a player completed the requirements necessary for the unlocking of certain paints before Update 0.12.1776, all paints with their achievements completed will unlock automatically after next battle.

Each vehicle can have three Camouflage/Paint configurations defined for different environment types (Woodland,Desert or Snow). The correct camouflage will automatically be selected when loading into a map based on that map's environment type. 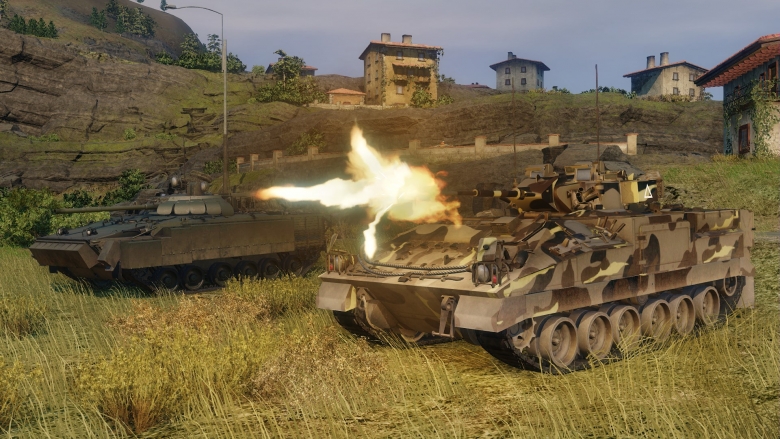 After reevaluating our reload speed and crew statistic bonuses, we've realized that some players are achieving very fast reload times using a certain combination of retrofits, crew skills, and consumables. This means that we've had to reduce many of these bonuses to help address this situation while we work on a long term solution for stacking reload and crew statistic bonuses. The full changes are as follows:

The Akatsiya has been consistently under-performing in terms of average revenue, win rates, and reputation - but only slightly. We're giving it a minor buff and we'll continue to evaluate it over time.

Compared to the CRAB, the BMPT-72 is has been under-performing. To help improve this and keep it distinct from the other AFVs in the line, we're primarily improved its Hit Points, but we've also improved its weaponry where appropriate.

The Draco is doing considerably better than pre-patch, but still generally feels underwhelming. To help this vehicle have a special niche and feel like a good competitor to the CRAB, we're improving its weapon.

While most TDs are performing well with the changes in the last patch, the LAV-600 has fallen behind the curve. To improve this, we're upgrading its gun performance. If these changes prove insufficient, we'll continue to evaluate further changes as needed.

The Leopard 2A6 is underperforming in both win rate and reputation earnings compared to other Tier 9 vehicles. We're giving it some simple improvements to help bring it up to par.

Like many of the more direct combat focused AFVs, the M2 Bradley has been tough to get perfect. We're focusing our current series of improvements on its weapon systems, and we'll continue to iterate on it as needed.

The M48 is performing slightly below standards, and its upgraded cannon wasn't very impressive. We're giving some boosts to the second cannon to help make the upgrade feel meaningful and improve the vehicle's overall performance.

Several vehicles in the T-series have been performing below standards for quite some time. We're making some general improvements to the majority of the line. Some of the vehicles are only receiving small improvements, while the ones that are suffering the most will receive larger changes.

Obsidian Entertainment and My.com are proud to introduce the the newest addition to Armored Warfare - Update 0.12, bringing some of the long-awaited and exciting features!

On the 21st of January, both Open Beta servers will not be available for an extended period of time in order to implement Update 0.12.1776