It was a two hour drive from the teeming metropolis that was modern day London to the southern coast of England and by the end of the journey, sheer boredom of the cold, late autumn in the British countryside overcame Strom's initial anxiety.

Every town was the same – decrepit abandoned houses, boarded windows and the ever-present sense of hopelessness. They called the hills of England green once, he thought, but all he saw was grey. After twenty minutes, he slowly slipped into a half-sleep that was only interrupted by a nearly imperceptible shift in the hum of his car's electric engine that caught his attention.

The car slowly pulled up to a huge driveway, leading to a massive English country house. As if by a flip of a switch, the anxiety was instantly back. He knew how few people received this opportunity. Ever since he had received the unexpected invitation three days ago, he had been thinking about what to say. He was still thinking about it as he stepped out of the car into the cold, windy evening.

The air smelled of sea – a clear, salty scent, not the toxic garbage he was used to from London. He stopped for a few seconds, enjoying the feeling until a discreet cough from a nearby guard waiting to accompany him ended his reverie.

The house was surrounded by dozens of men. Some patrolling the vast gardens while several armor-clad heavy troops stood near the entrance, watching for a possible intruder. Nothing would get past them without their master's permission. Strom pulled his black uniform closer to his body as he walked the few steps from the car to the manor.

The inside of the house was as he had expected – a large number of hunting trophies adorned the walls and the footsteps of his and his guard's heavy military boots echoed through the vast entry hall. Most of the trophies had to be very old he pondered as he followed the guard to what he expected would be some sort of meeting room. There were no deer in Britain's forests anymore.

As he and his silent guard companion made their way into the massive building, he started to hear echoing music. The music got louder as they continued their journey through long halls and large rooms filled with all kinds of antique furniture until they arrived to a massive library. The slow, chilly sound of an electric guitar solo originated from a modern-looking gramophone in the middle of the room, right next to a sofa where an old man sat with his eyes closed.

The guard saluted and left, his departure only announced by the sound of the closing door behind them. Strom was not sure what to do, so he just stood there and glanced occasionally at the man on the sofa until his presence was acknowledged by a brief nod and a finger pointed to a nearby chair. Strom sat down.

Andrew Clayburn was a well-built man in his sixties. Strom tried to think of the best word to describe him, but all he could come up with was "unassuming". The only truly distinctive part of Clayburn's face was a major scar under his right eye. There was otherwise nothing pointing to the fact that Strom was sitting in a room with one of the richest and most powerful men on the planet. Very little was publicly known about Clayburn apart from his obvious role as the owner and head of Clayburn Industries, Strom's employer. There were the official photographs, but the real Clayburn looked nothing like them.

Clayburn was a legend, a self-made man who had built an industrial empire on the ashes of old world companies. Millions lived under the watchful eye of his private military force.

Private Military Force. The term was still used, as far as Strom knew, but in a world where private armies dwarfed those of many a country, it felt obsolete.

Strom was caught off guard.

"Sorry sir. Never heard of him."

Clayburn responded with a quiet chuckle as he reached out to the device and stopped the record.

"I suppose you wouldn't have. The whole album is about madness, the futility of life and existential anxiety. Not the kind of music they would play on corporate radio. But it's a mad world, out there, so it is quite fitting."

Clayburn waved his hand in the window's general direction.

Strom felt Clayburn's piercing blue eyes study him and realized that he was being tested. He settled for a diplomatic answer – his belief was that soldiers were there to obey, not to question. Still, he felt he was expected to respond with something more than a simple 'Yes sir.' He took a short while to collect his thoughts.

"Perhaps somewhere. The world Clayburn Industries controls is in order."

Another chuckle. Now it was Clayburn's turn to pause a while before he responded.

"What if I told you that if you told someone two decades ago that people would be voluntarily giving up all their rights for the secure future of a corporate indentured contractor, everyone would laugh at you?”

"They receive food, clothing and protection from the company. Everything they need. Better than to starve on the street."

"And yet, back then, nobody was starving. At least not here. It's easy to talk about rights when your neighborhood is safe and your belly is full."

Strom was a young man in his twenties. He only barely remembered the riots. He was but a child back then and did not understand what had happened and when he was old enough the teacher at the corporate school he attended wouldn't delve much into such topics. After all, the corporation provided all he and his parents needed – food, clothing and medicine for his mother. Strom felt genuinely grateful.

When he turned 18, he immediately entered the military division of Clayburn Industries and quickly rose through the ranks by his wits and loyalty. It was as it should be, he thought, a lifetime of his service for the company that provided for him and his kin.

"It's certainly better than the alternative, sir. Considering how the American south ended."

"Indeed..." Clayburn's voice trailed off, his eyes focused on something only he could see. When he finally continued, the shift in topic and the change in his voice indicated that he was finally getting to the true reason of the meeting.

"You are a smart man, which is why I assume you know why you are here."

Strom immediately straightened his back.

"I believe it has much to do with the Intervention and what followed, sir."

"Yes. We need loyal people now more than ever. You are to assume command of our reformed expeditionary forces. But before we proceed..." he paused, "you need to hear the whole story."

A maid entered with a tray of sandwiches and a teapot with two cups. She left them on the table and scurried away. Clayburn reclined on his sofa as he began to explain.

"It all started with Blackwood." 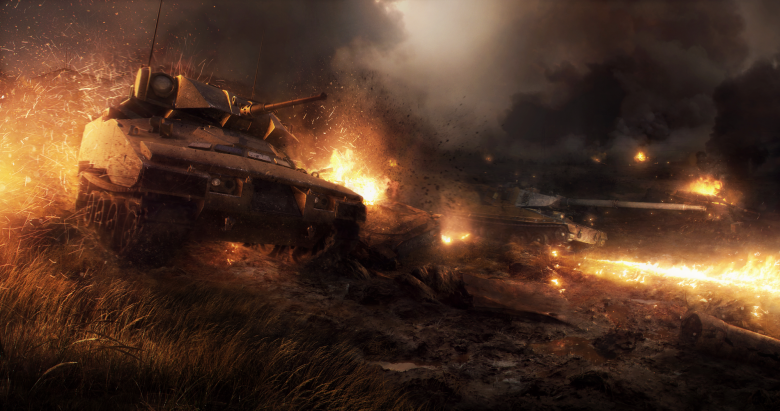 We are happy to introduce the upcoming Storyline Campaign to Armored Warfare. The campaign will be preceded by the Intervention – a major game event intended to set the basic narrative. An upcoming series of articles will give you the opportunity to delve into the devastated world of the late 2030s as we finally unveil the Armored Warfare lore.

Season 1 of the campaign will run for the majority of 2017 and will be divided into a number of episodes that will be gradually unlocked for players to enjoy. Apart from the narrative, each episode will feature a number of goals that players have to complete to receive that episode's reward and unlock the next one.

Completing the entire season will unlock the ultimate reward. It will be a major undertaking spanning many months. Player abilities will be tested throughout the campaign, which will involve all the main game modes of Armored Warfare.

We will publish more information about Armored Warfare lore soon.

Stay tuned and we'll see you on the battlefield!

The Man O’War event is in full swing. Learn about the progression of the story written by your actions!

Learn about the upcoming storyline campaign, the story's progression and the events that followed the Hajduk Militia victory in the Man O'War Showdown