The Gun Tank, 120mm, M1 Abrams was built as a replacement for the aging M60 series. By the mid-1970s, when the Abrams prototypes were first introduced, various Patton versions had been in service for nearly three decades and were becoming obsolete, despite numerous advanced variants and modernization programs.

The first attempt to replace them was the MBT-70 joint development program with Germany. The program aimed to use cutting edge technology to create the best tank possible. However, it resulted in an unpractical and expensive vehicle using untested technology, the cost of which led to its final cancellation in December 1971. 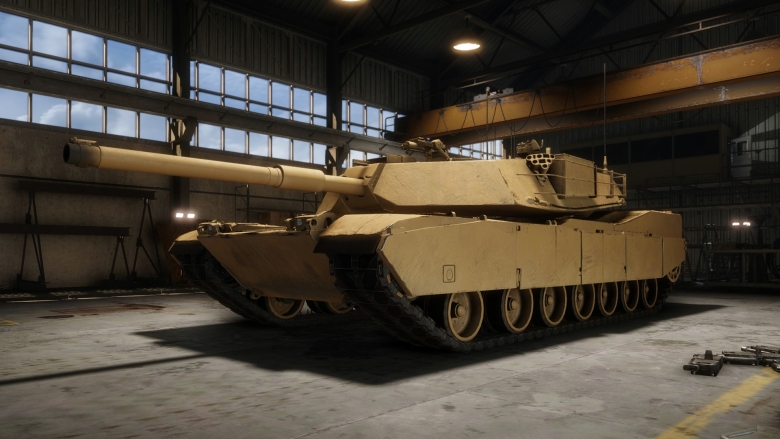 After the MBT-70 fiasco, the U.S. military changed its approach. Instead of requesting vehicles featuring bleeding edge technology, the focus shifted towards affordable vehicles good enough to ensure battlefield supremacy without being as expensive as the MBT-70. And so the M1 program was born. The first prototypes of the XM1 (previously XM815) were delivered by Chrysler Defense and General Motors in 1976. Both were armed with a M68 105mm rifled cannon, which was a license-produced variant of the Royal Ordnance L7, one of the best NATO weapons of that time. However, the General Motors vehicle was powered by a diesel engine, while the Chrysler Defense prototype was powered by a newly-developed turbine engine. Chrysler had a lot of experience designing turbines, ever since the 1950s, and was confident in the superior abilities of this new propulsion type. Turbine-propelled tanks were nothing new, some of the first attempts date back to World War Two, but the Abrams and the T-80 were the first tanks to use the turbine on a mass-produced scale.

Following comparative trials with a special Leopard 2 variant (Leopard 2AV), Chrysler's XM1 was selected as the future U.S. Army Main Battle Tank. It was named after General Creighton Abrams, who commanded American armored forces in both World War Two and the Vietnam War. Production ran from 1979 and around 10 thousand Abrams Main Battle Tanks of various versions have been built to date.

The M1 Abrams is a classic Main Battle Tank with a 4-man crew (commander, gunner, loader, and driver). Its weight ranges from 54 tons for the original M1 to 62 tons for the up-armored M1A2. The tank is 9.77 meters in length with the gun facing forward, 3.66 meters in width and 2.44 meters in height.

Its Chobham-type armor is a major upgrade over the steel of its predecessor. American development of this type of armor goes back to 1973 when representatives from both Chrysler and General Motors visited the United Kingdom to witness its manufacturing process. This experience led to major changes in the design of both prototypes. Steven Zaloga, a U.S. military historian, estimates that the frontal armor protection of the basic Abrams is equal to 350mm RHAe versus kinetic rounds and 700mm RHAe versus HEAT rounds, but Soviet sources estimated that the protection was even higher. In the later Abrams versions, the already considerable Chobham protection was further enhanced by the introduction of depleted uranium armor elements, starting in 1988 with the M1A1. This increased its protection to as much as 600mm RHAe versus kinetic rounds and 1300mm RHAe versus HEAT rounds. There are Abrams variants both with and without the depleted uranium elements and the export Abrams tanks typically lack it. The newest protection addition includes Explosive Reactive Armor sets as part of the Tank Urban Survival Kit (TUSK) with the purpose of making the vehicle more durable in urban environments versus RPG-type weapons. 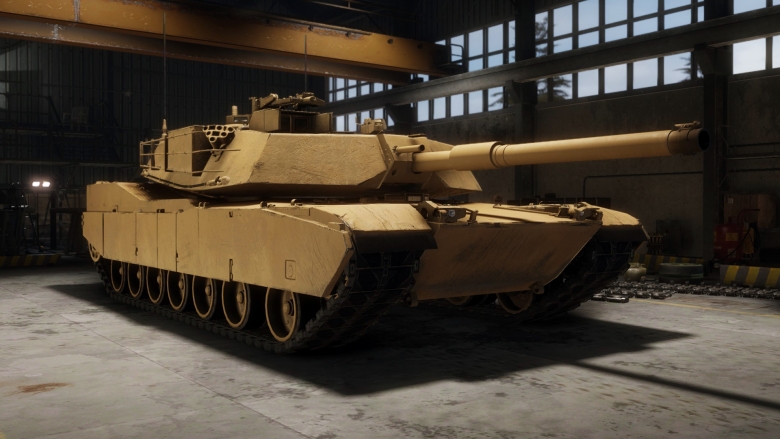 The Abrams can also be equipped with a soft-kill active protection system (AN/VLQ-6 Missile Countermeasure Device) that interferes with the guidance system of certain guided missile types by emitting a strong infra-red signal that can confuse the IR-seekers. The Abrams' internal design ensures maximum crew safety by containing the blasts in uninhabited areas protected by armor. The crew can thus survive even catastrophic damage that would mean certain death in other, less-protected, vehicles. For example, during ammunition cook off the force of the explosion is directed outside thanks to the blowout panels implemented in the ammo compartment design. The Abrams is also equipped with a halon automated fire-extinguishing system.

The first version of the Abrams was armed with a 105mm M68 rifled gun, a copy of the British Royal Ordnance L7. While an effective weapon, the need to increase firepower when facing advanced Soviet designs led to its replacement in the late 1980s with the German designed 120mm L/44 Rheinmetall smoothbore. In the Abrams, the gun was designated as M256 and it remains the current main armament of the vehicle to this day. Just like the M68, the M256 gun is manually loaded by the loader, retrieving shells from the rear of the turret. It can fire both kinetic (APFSDS) and multi-purpose HEAT rounds that can also be used against soft targets due to their explosive charge.

The M829 series of APFSDS shells were introduced to defeat the top-of-the-line Soviet tanks of their respective eras and the most modern version, the M829A4, is said to be able to destroy any MBT currently fielded or appearing in the near future. Another shell used is the M1028 canister round, which was developed after the Iraq war. It is absolutely deadly to infantry and soft targets at distances of up to 600 meters. More advanced types of shells are currently in development.

In addition to the main gun, the Abrams is equipped with three machine guns – the Browning M2 .50 caliber on the top of the turret in front of the commander's hatch, the 7.62mm M240 at the loader's hatch and a coaxial 7.62mm M240. Another CROWS system remotely-controlled heavy machine gun can be added to the turret as part of the TUSK kit.

The Abrams is powered by a 1500hp Honeywell AGT-1500 multi-fuel gas turbine and a six speed (4F/2R) Allison X-1100-3B Hydro-Kinetic automatic transmission. This engine enables the Abrams to go as fast as 72 km/h on hard surface or 48 km/h cross-country, but higher speeds have been reached by removing the speed governor. The turbine can run on multiple types of fuels including kerosene, diesel or gasoline – this ability was implemented to simplify logistic requirements. The most commonly used fuel in the U.S. Army is the JP-8 jet fuel, while Australian Abrams tanks run on diesel. The engine emits a distinctive whistling sound and is less noisy than the older variants of tank diesel engines, which earned the Abrams its popular "Whispering Death" nickname during its first REFORGER exercise. Unfortunately, this type of engine does have its drawbacks with fuel consumption being somewhat higher compared to diesel engines of equal power. However, this issue is far less prevalent than the criticism of it would suggest.

There are three major variants of the Abrams:

Each of these variants has a large number of sub-variants with the most advanced M1A2 version being upgraded to several System Enhancement Package standards and with a TUSK armor kit. 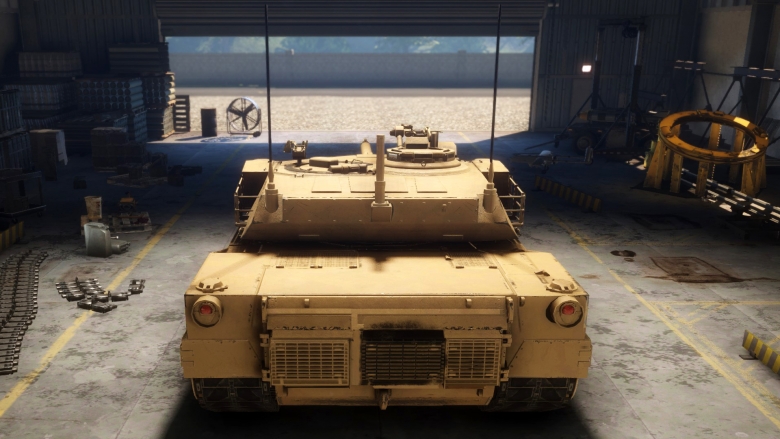 The Abrams became one of the most famous tanks in the world, following its stunning performance during Operation Desert Storm and the Iraq War. Around 2000 Abrams tanks were deployed to Iraq during the Gulf War and the Abrams outperformed all its Soviet-made opponents. While the stunning success in Iraq was the result of combined arms tactics and not the vehicle alone, the speed with which possibly the strongest military of the region was crushed by the Americans deeply shocked both Russia and China, leading (amongst other things) to the development of the next generation of Main Battle Tanks.

The majority of Abrams losses during both wars were attributed to improvised explosive devices and urban combat. The tank proved to be practically impervious to older Soviet designs in both cases. Between 2010 and 2012, a number of Abrams tanks was sold to Iraq and then promptly lost to ISIS forces that allegedly operated a few for a while before being bombed by the U.S. Air Force. Saudi forces also lost several Abrams tanks during their incursion into Yemen, proving that even the most modern of tanks can be defeated if used by poorly trained crews using the wrong tactics.

Development of a replacement for the existing Abrams tank variants (commonly known as the M1A3) is scheduled to start around 2020.

In Armored Warfare, the Abrams family is currently split into three tiers:

These cover the older variants as well as those currently in service. The Abrams of any tier is a hard hitter and can take a lot of punishment.

The newest change to the Abrams family is the new model for the Tier 7 M1 Abrams coming in Update 0.14. Another enhancement for the Abrams vehicle series that Obsidian Entertainment is working on is adding a turbine sound to the vehicles equipped with this type of engine. In the future, the line will end on Tier 10 with the upcoming XM1A3 Abrams, a heavily modified version, featuring the most advanced and experimental features.

We do hope you will enjoy the Abrams series in Armored Warfare and we'll see you on the battlefield!