Armored Warfare attracts players from all kinds of environments and many are active service members. One such player, Dennis, who goes by the nickname of ADSL on the forums, was kind enough to answer some questions regarding his work – he is currently a Leopard 2 crew member in the German army, the Bundeswehr.

What made you join the military?

I was born at the end the 70s in Germany and I had the chance to witness a lot of maneuvers and military activity in the area where we lived. In the woods next to our house, there were a lot of soldiers and tanks, especially in the summer months. Americans, the Dutch and, of course, a lot of Germans always hid their stuff around there. It was a very different time then, the Cold War was in its climax and tensions between NATO and the Warsaw Pact were very open. I loved to join the soldiers together with my friends, share MREs, sit on an APC or a tank and so on. For the soldiers, it was also a different experience compared to their regular duties and for some – especially those from the USA – it was their first direct confrontation with Germans. Many of the US soldiers came to Germany due to the REFORGER exercise and some had never been before. For me, this was when I decided that I wanted to be a tank crewmember. 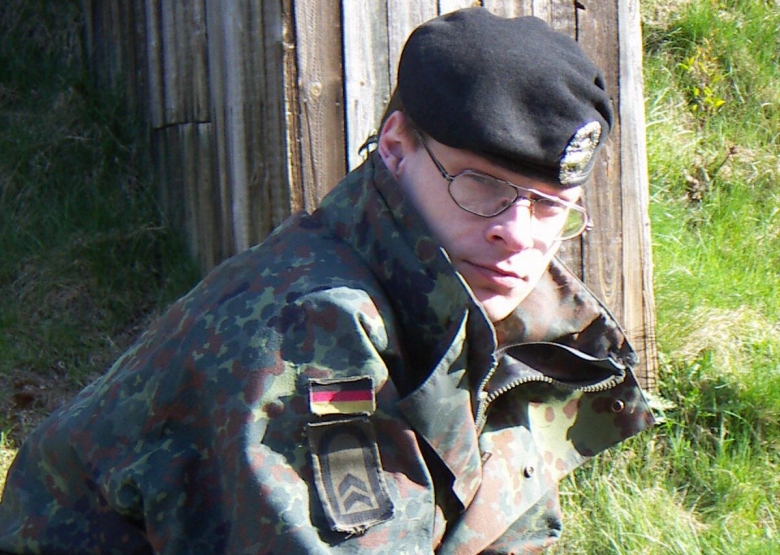 Later in life, after school and my first job apprenticeship, I decided to join the Military Forces in order to get a different view on things. I still loved tanks; I was fascinated by their sheer size and loudness.

Joining the military in the late 90s was different to how it is now in Germany. All young males usually had to to do 10 months of national service in the army (it was greatly reduced after 1990) or in some social service if they didn’t want to serve with weapons. But the 10-month service did not appeal to me: you couldn’t really choose where to go, you had no chance to obtain higher ranks and of course the pay was really low. I decided to volunteer for a longer service period, which was scalable (2 years, 4 years, 12 years) depending on what kind of profession and education you had. I chose to become an NCO (Unteroffzierslaufbahn), which came with a 4 year contract. I volunteered, passed all the tests and got to the planning recruiting manager, who asked me:

"Well, you passed everything and you can now choose almost anything apart from Paratrooper training, so where do you want to go?"

And the first thing I said was:

“It doesn’t matter where in Germany, but I want to serve on the Leopard 2!”

to which he replied:

“What, seriously? You can do anything, including joining higher ranks directly as a pre-promoted NCO! This doesn’t apply for a tank crew career!”

“I’m not interested in getting merits without doing anything. And I don’t care if I get dirty, just give me a tank!”

Well, 6 months later, I started my tour of duty in one of the most famous and best known German Tank Battalions, the Panzerlehrbatallion 93 in Munster.

Can you tell us about some of the best moments of your service?

Well actually that is a good question, can you repeat it? I have some strange noises in my ear!

Just kidding, despite the many rumors, we do wear ear protection under our speaker set. Yes, unbelievably we do use Ohropax ear protection inside our ears and the headset on top. If you adjust it the right way, you are still able to understand incoming radio chatter, while also being protected against the big boom of the gun. 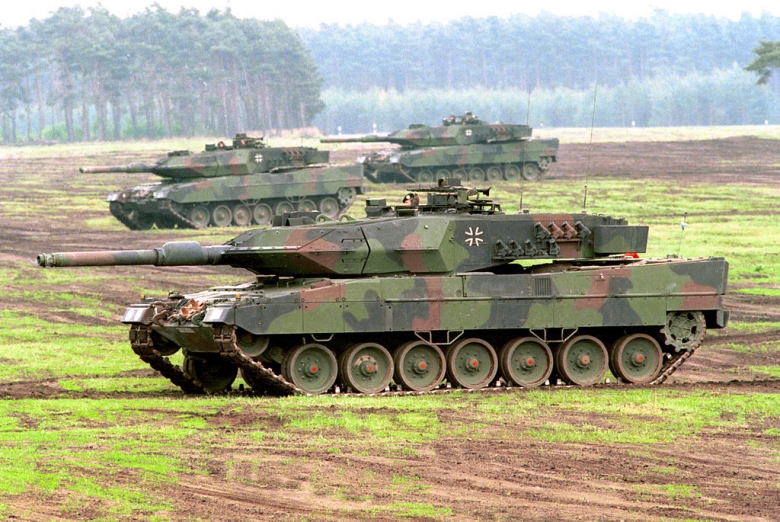 Leopard 2A5 of the Bundeswehr, photo by Bundeswehr-Fotos

Inside the tank you honestly don’t hear the gun that much. It sounds surprising, but it’s true. You usually just hear a “Click – clonk”, which is caused by the breech and the movement. The clonk sound is basically the bottom of the shell that doesn’t burn and is falling into the casing basket.

The other effects are much more intensive, especially the shock directly after the shot. You feel the tank shake when the gunner presses the buttons and some dust usually comes into the tank via the open top hatches. There tends to be some smoke coming through the open breech as well, while the loader rams another shell inside.

The first shot – that is an adventure. It’s like many other things humans do for the first time. They know what will happen, but they don’t actually know how it is when it happens.

NCOs or the recruits who have chosen the NCO career path do their first shooting in a tank during a special course. Every NCO who becomes a tank commander needs to pass this course, we called it “NCO course part II” (Unteroffiziers Lehrgang Teil II) and it usually starts about 9 months after you join the forces. During the course you learn not just how to handle the tank – this you already trained to do before – but how to train new soldiers on exactly that piece of equipment, how to operate the tank correctly, how to command the loader, the driver and the gunner. And, obviously, you receive additional training in gunnery.

As the final step of the course, the NCO recruits participate in certification shootings (ATN Schiessen). You must pass this step to receive the final certificate for becoming a gunner on the Leopard 2 MBT.

Actually, the day is full of excitement; most of us have already seen a tank taking a shot. But the thrill in seeing your close comrades shooting and getting closer to it with you being the next in the line is exhilarating. And then, you are in the gunner’s seat – in my case I was able to start my trial round on the gunner seat and then I was the loader for my comrade. You start to set your personal settings for the optical gauge, you check your seat and finally the commander jumps in, which really reduces the space you have to move. We went through all the settings of the FCS system such as system error settings, collimate settings, temperature, and wind speed (the Leopard 2 - unlike the Abrams - doesn’t use wind sensor anymore as we, the Germans, found this system to be too inaccurate). 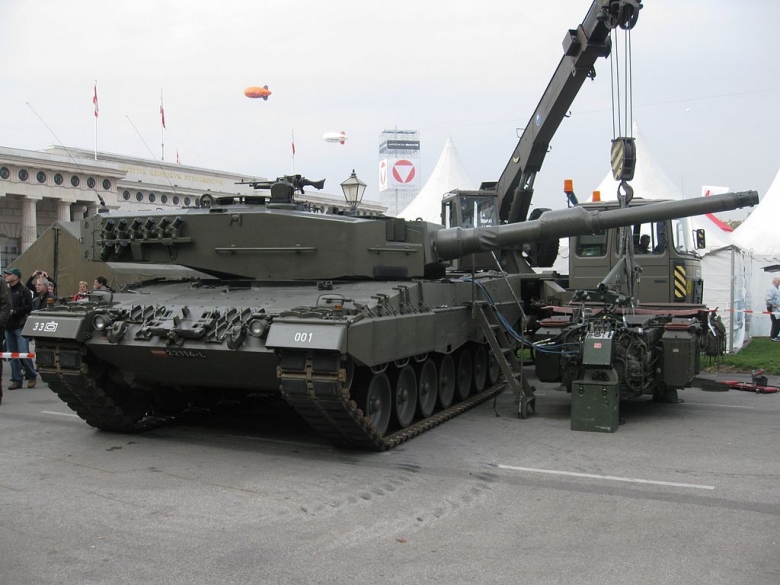 Leopard 2A4 of the Austrian army, photo by Burtonpe

Finally, our platoon – the tanks fire exclusively as a platoon unit – received clearance for the next round via radio. We moved to the shooting range and started to load the gun and the coaxial mounted machine gun. The gunner reported “KE geladen, Sicher getastet!"

As the last step, we put the laser key into its fitting and unlocked it (in Germany, the use of the Leopard laser designator requires unlocking, just like any other weapon). A couple of minutes later that felt like an hour, a target came up. You see, a tank target on the shooting range is an electrically controlled wooden paper flap. It doesn’t actually really look like a tank, only like the silhouette of a tank.

There are several sizes, depending on whether it represents a tank from the front or from the side. The first one I spotted was a tank front, so basically an attacking tank.

This time, the target was big enough to place the whole targeting circle correctly on it, which means I got a stable reflection at 1400m.

After some radio transmissions that I didn’t pay any attention to, the commander replied “Erneut lasern” (get the range again), so again I got the range, repeated the whole process and he finally said “Feuer” (Fire). At that moment, I just saw my display jumping from 0 (means safe) to F (means unlocked) and I pressed the buttons and at the same time I shouted “Achtung” (Attention, which should warn the loader). I couldn’t see anything, I heard my heart pumping, I sweated, but before my eyes it was just black.

My commander slapped my shoulder and sounded somehow happy, and finally after some seconds, maybe a minute, I again looked through the EMES (main gunner sights) and I could see this small little hole near the middle of the target. 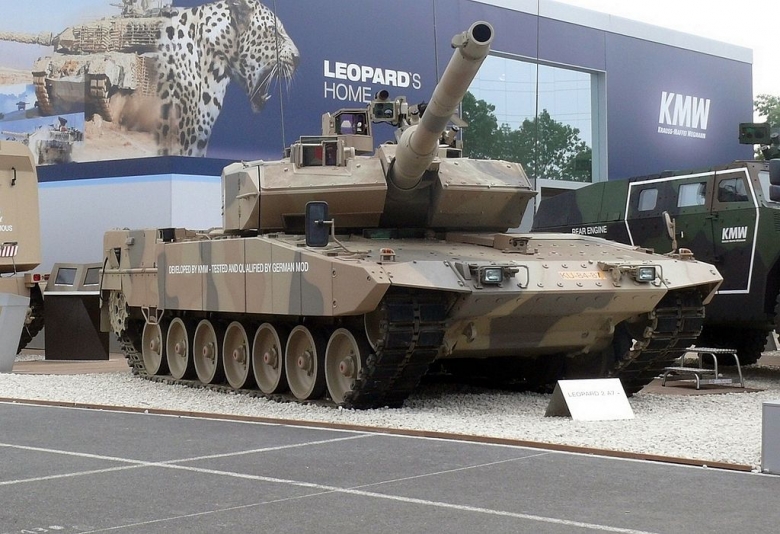 Well, I didn’t notice the “boom” or anything, only some shaking and dust. It was terrifying, but also a damn cool feeling.

We continued with another 6 or 7 shoots, 1-2 on moving targets, another one without the full FCS enabled and finally, one under emergency conditions using the manual turret traverse and the manual calculation-based range finding. Yes, with all this technology we have that usually allows us to hit targets in 98% of cases (with the exception of the gunner making an error), we learn to operate and shoot without anything besides our body and brain. It was a great moment, when the commander took my cap (in Germany tankers wear a black beret) and used a tool to buckle down the gun on the tank emblem. The buckled gun shows everyone that I hit with all my shells during the gunnery trials. It’s an unofficial mark, which makes the wearer of it extremely proud.

To be continued – in the next part, we’ll learn what it’s like having to clean up the Leopard 2 and how does it fare compared to the American M1 Abrams during training exercises...

The second part of the interview with a Bundeswehr member of the Leopard 2 crew – gain an insight into the life of a tanker in Germany!

The third part of the interview with a Bundeswehr member of the Leopard 2 crew – gain an insight into the life of a tanker in Germany. In this part he talks about the comparison between the Leopard 2 and the M1A2 Abrams