Today, we’d like to show you some new skins that we’ve prepared for you. None of them are, strictly speaking, “historical” in the sense that they are modeled after a specific vehicle (unlike, for example, the Tamanskaya Division T-90). But with the 75th anniversary of the end of the Second World War soon approaching, we’ve decided to add three Allied-themed skins to the game to commemorate this event.

Each of these skins is based on either a specific historical vehicle or a unit with its own distinctive camouflage and appearance. Without further ado, here they are:

Desert Rat skin for the Challenger 2 ATDU Tier 10 MBT – as you might have guessed, this skin is based on the camouflage and symbols used by the 7th Armoured Division, also known as the “Desert Rats”. The Desert Rats were, without any doubt, one of the most famous British units to ever exist and their exploits during the North African campaign against the Afrika Korps are the stuff of legend. 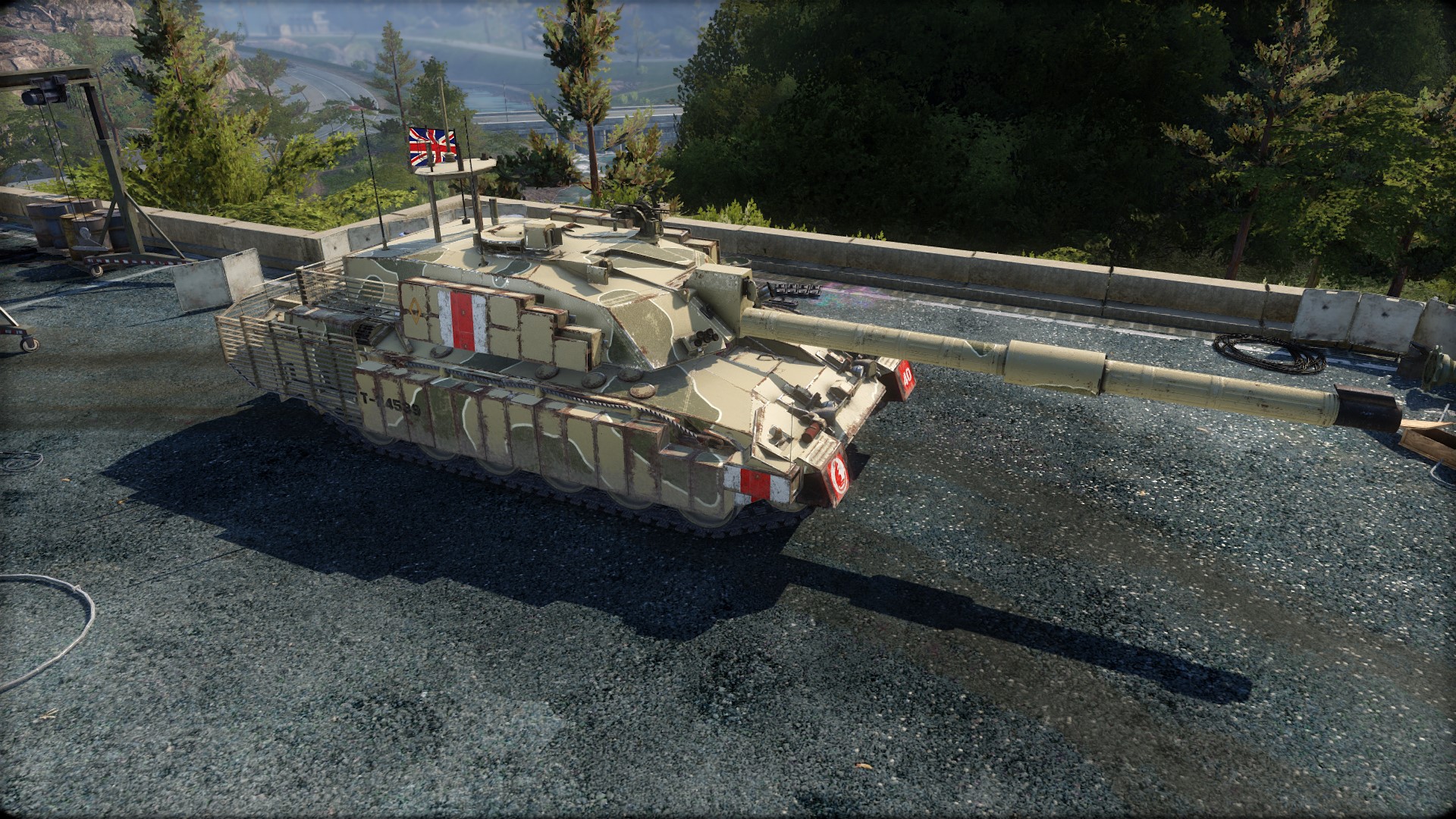 Formed in February 1940, the unit started with an assortment of rather obsolete tanks but nevertheless proved to be an affective fighting force by routing the Italian forces in North Africa and forcing Germany to send reinforcements in the form of Erwin Rommel and his men. The Desert Rats (earning their name for their desert-crossing abilities) would fight them until the final victory in 1943. From that point onward, they’d fight the Germans in Italy, Normandy and would end the war in Berlin. 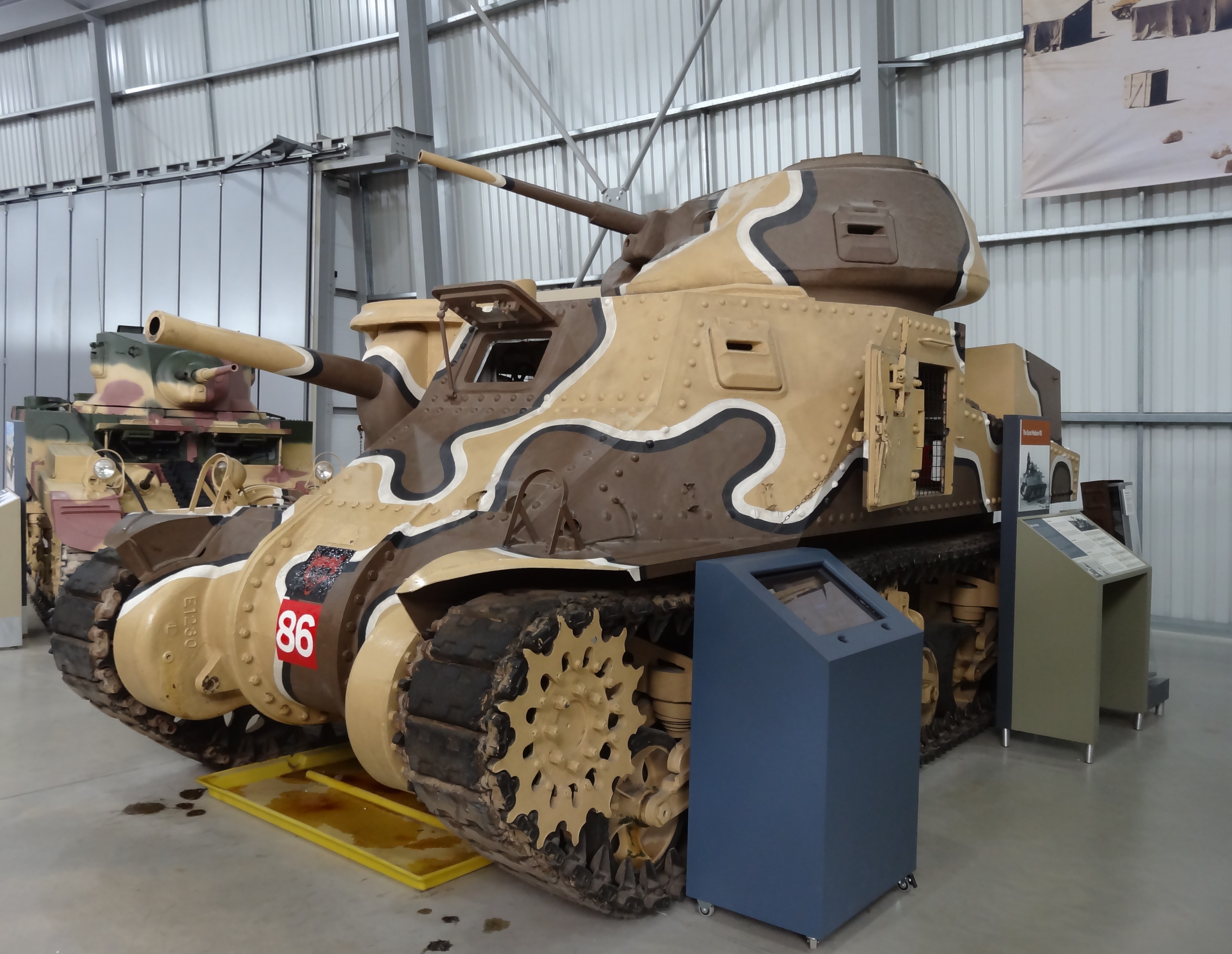 The Challenger 2 ATDU skin is based on the desert camouflage pattern used by the 7th Armoured Division on a Grant tank (the British version of the M3 Lee medium tank) during the First Battle of El Alamein in July 1942.

Boyevaya Podruga skin for the T-14 Armata Tier 10 MBT – this is a Russian-themed skin based on an actual vehicle – a T-34 tank carrying the same name and belonging to one Mariya Oktyabrskaya.

Her story was a tragic one – she was a worker and a wife of a Red Army officer. Her husband was killed during the desperate early days of the invasion, but at that time, she was evacuated to Siberia and it took two years for her to find out what happened to him. When she did, she swore revenge, sold all her possessions and donated the money to the Red Army. 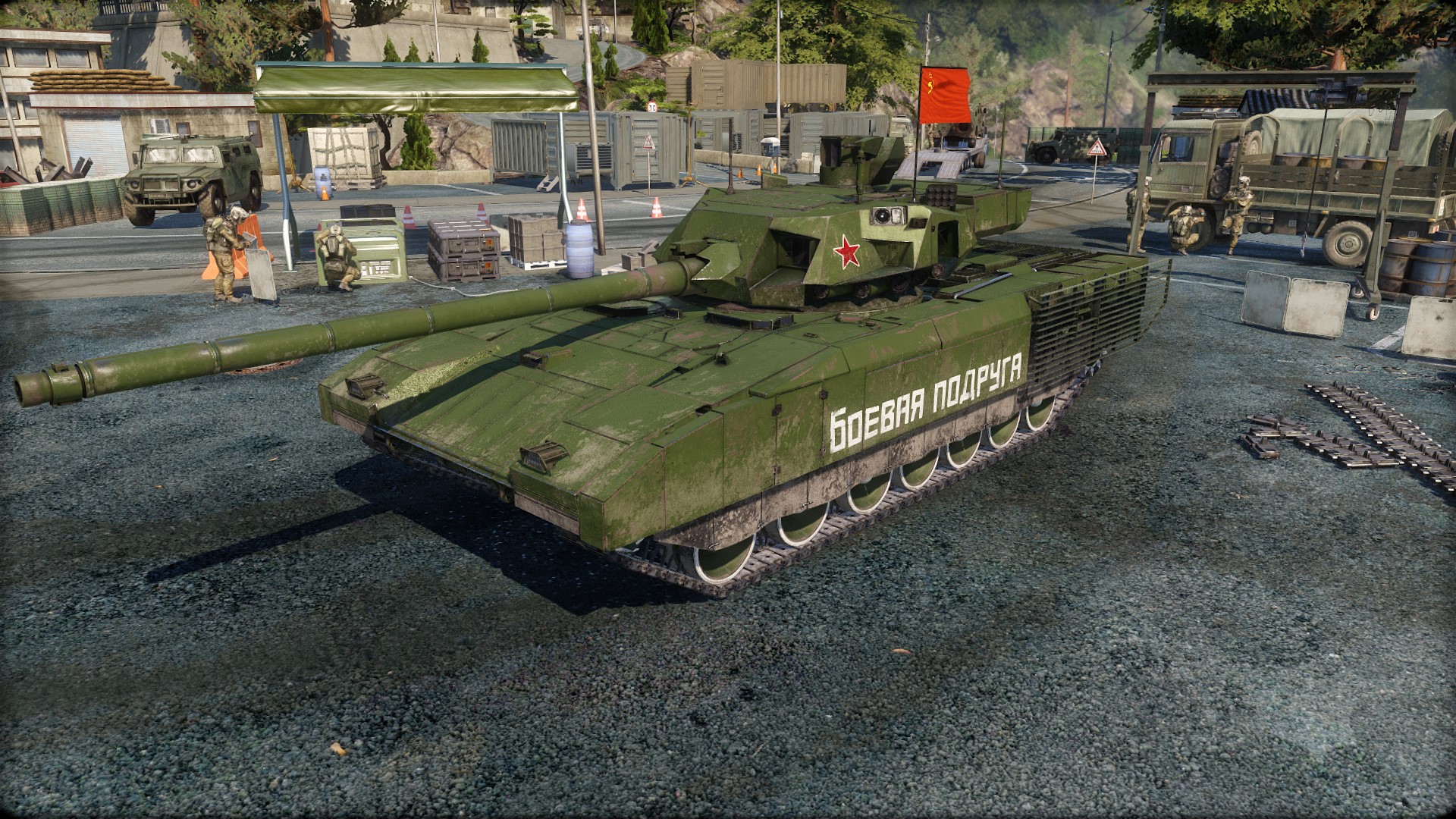 In return, she requested to become a tank crewmember and her wish was granted. She underwent formal training and became a driver of her tank, which she named “Boyevaya Podruga.” The name often gets translated as “Fighting Girlfriend” but this is a bit misleading as the word “Girlfriend” implies a romantic relationship. The correct translation should be along the lines of a friend who is a girl.

In any case, Mariya Oktyabrskaya proved herself to be a brave and capable soldier and fought in several major battles, including the liberation of Smolensk and Leningrad. But her bravery would become her undoing. In January 1944, near Vitebsk, her tank was damaged and she leapt outside to repair it despite heavy enemy fire. She was wounded by an artillery shell and, despite the best efforts of the Soviet doctors, died from her injuries on March 15, 1944. She was posthumously awarded with the Hero of the Soviet Union title and became perhaps the best known female tanker of all times. 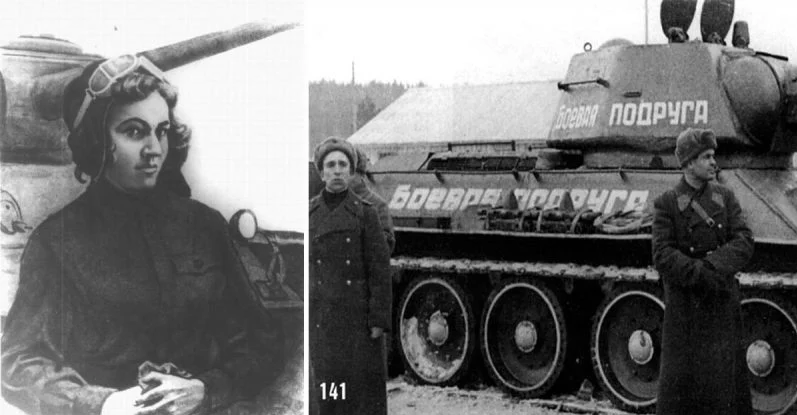 As for the tank – there was no single “Boyevaya Podruga,” there were in fact no fewer than four tanks named so, each stepping in after the previous one was knocked out. The fate of the final one is unknown.

And last but not least, there’s the Bastogne skin for the M1A2 Abrams Tier 8 MBT, inspired, once again, by an individual vehicle.

This specific vehicle was the American “Jumbo” Sherman medium tank that bore the name Cobra King, but it was the “First in Bastogne” inscription that really made it famous. The “Jumbo” Shermans had extra frontal armor and were intended to lead U.S. Army formations in hostile territory. They were effective and popular vehicles despite their increased weight. 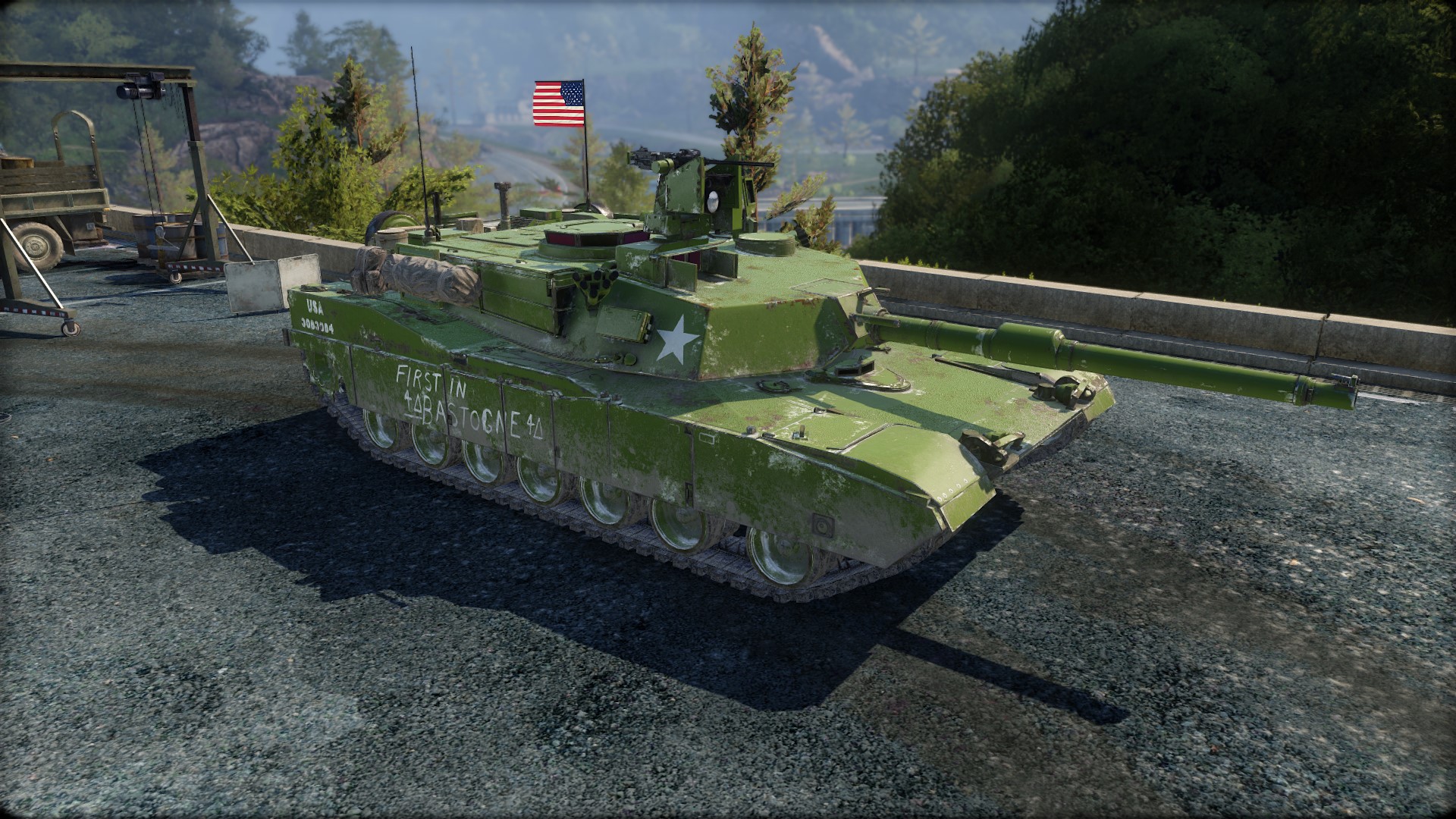 During the Battle of the Bulge (also known as the Ardennes battle), the Cobra King Sherman under the command of Lt. Charles Boggess led the effort to break through the German lines to save the American troops surrounded in Bastogne. The effort succeeded and the grateful soldiers wrote the “First in Bastogne” inscription on the side of the vehicle in chalk. That photograph then made the news.

This wasn’t the first – or the last – battle of the Cobra King. The tank survived until almost the end of the war. In March 1945, it was knocked out during an attempt to liberate a POW camp. The crew escaped but the tank became a burnt-out husk. Interestingly enough, the wreck was not scrapped, as it often happened to the remnants of the war in Europe and 65 years later, in 2009, it was found, identified, recovered and transported back to the United States of America. After a decade long restoration, the vehicle can now be seen in a military museum near Fort Belvoir, Virginia.

We are also adding the Red Army base paint with the same khaki shade as was used on the Soviet tanks during the Second World War: 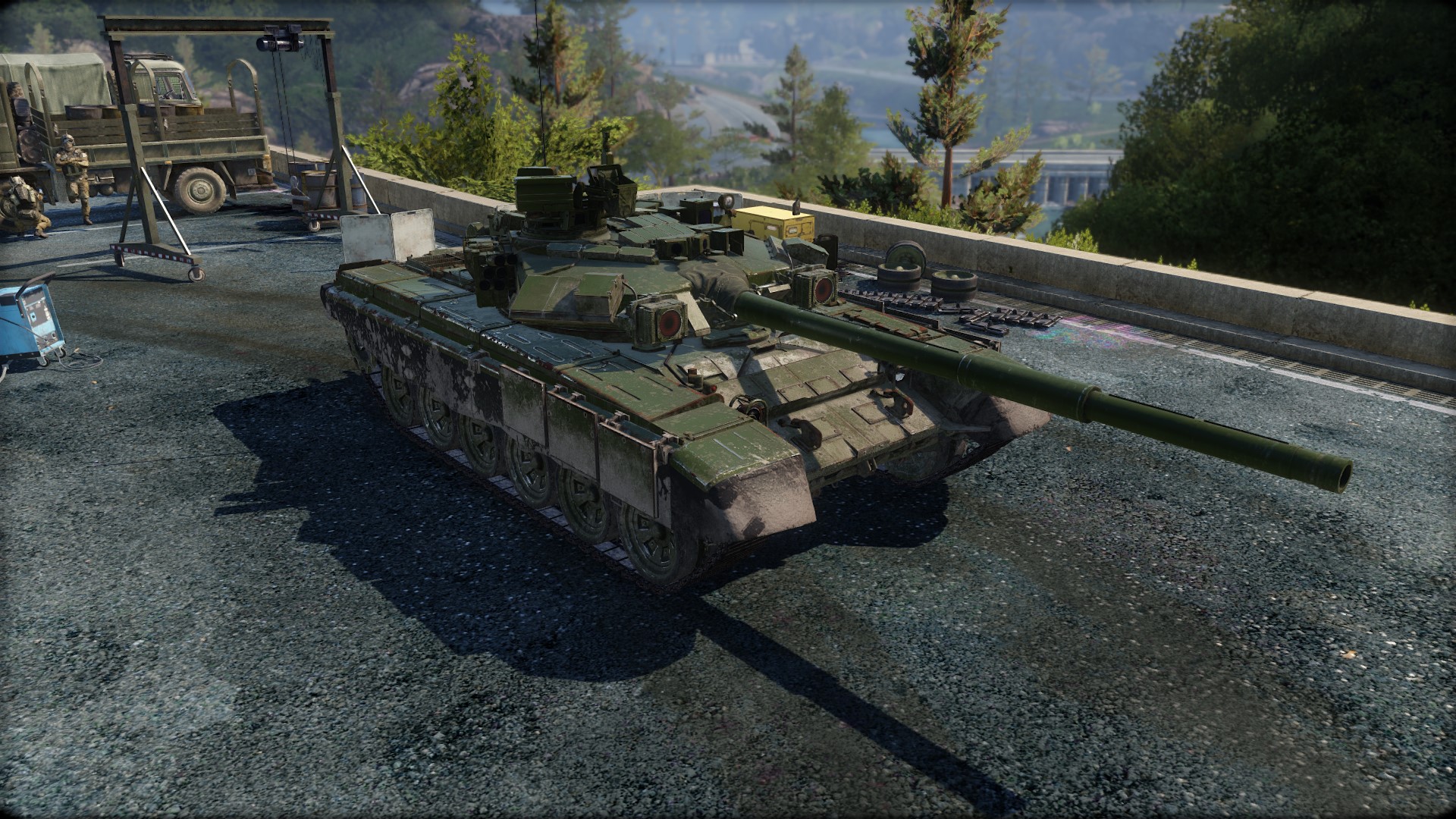 These skins will be obtainable for free in the near future. We hope that you will enjoy them and, as always: