For this year’s U.S. Independence Day celebration, we’ve prepared a special skin that we’d like to tell you about today. This skin will belong to one of the best Light Tanks in the game, the Tier 9 M8 Thunderbolt II. Now, you might be thinking – this is supposed to be a historical skin, how come you’re making it for a vehicle that had never seen service before its development was unceremoniously canceled in the 1990s? 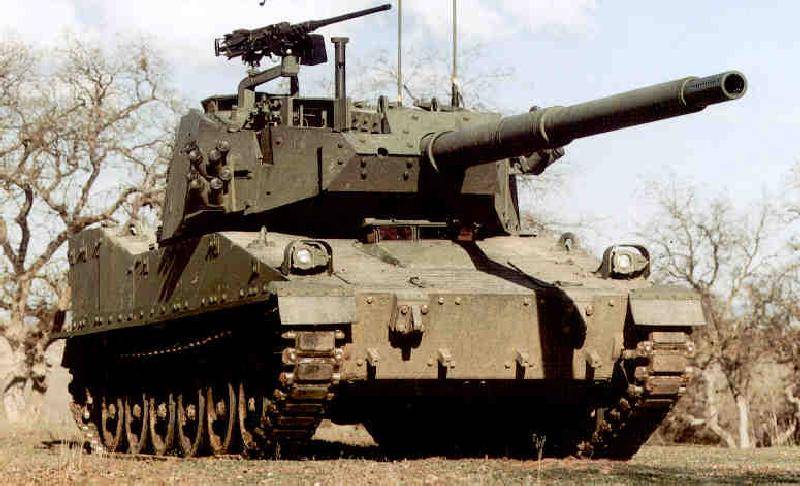 The answer is more complicated than that. Let’s start with the vehicle first. The XM8 by FMC was designed in the 1980s and the early 1990s to compete in the ill-fated Armored Gun System contest in order to replace the aging Sheridan, which had been in service since the Vietnam War. The whole history behind the program is described in this dedicated article but, long story short, it was canceled in 1996 following the budget cuts after the fall of the Soviet Union.

The prototype would eventually re-surface in 2003 and 2006, this time with a 120mm gun – this was the Thunderbolt demonstrator, intended to piggyback on the War on Terror, since the U.S. Forces lacked a proper mobile firepower platform. But that’s neither here nor there – the important part was that the Thunderbolt was a direct descendant of the Armored Gun System program, which originated in the 1980s. 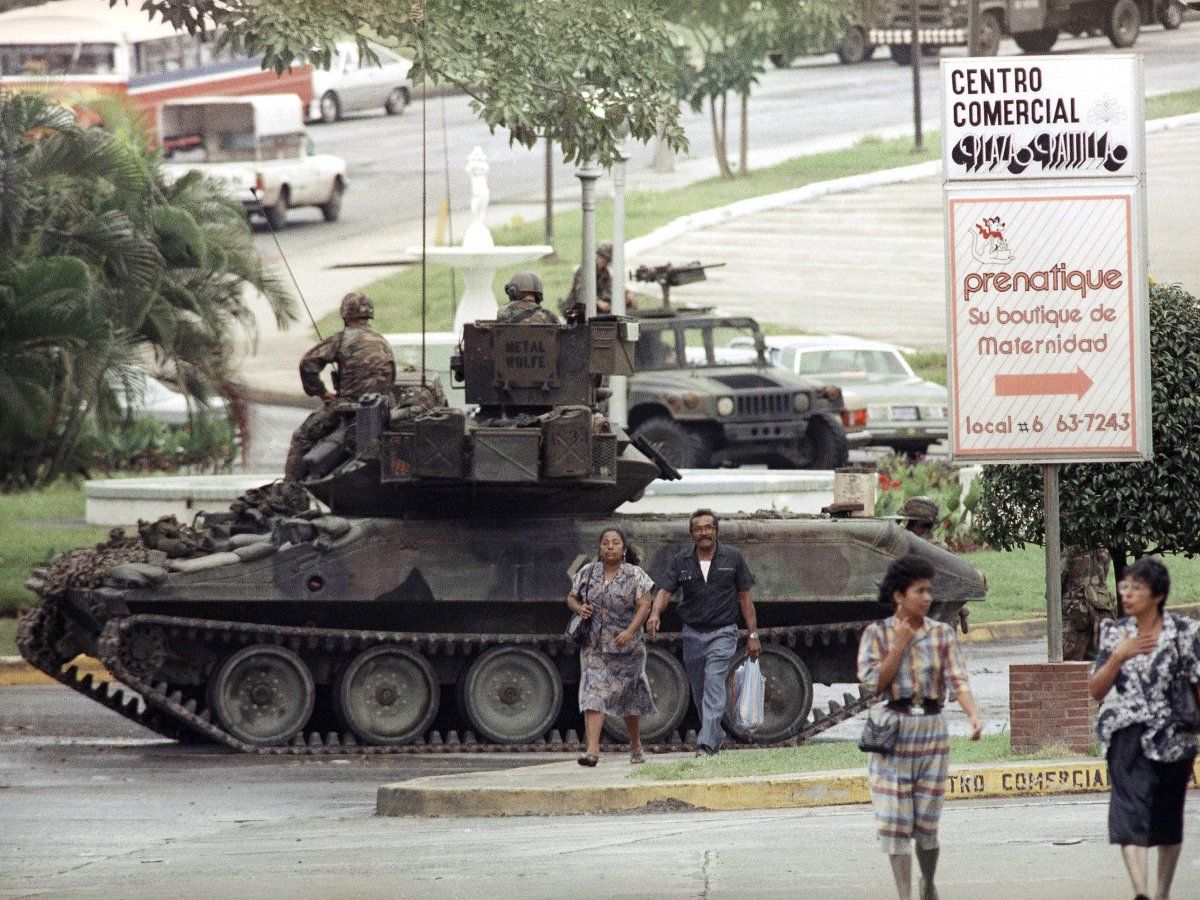 Let us, for a short while, return to the 1980s then, or rather to the end of that decade. In 1989, the U.S. military launched Operation Just Cause to depose Manuel Noriega, the leader of Panama, who had become very active in drug trafficking in the late 1980s and despite his ties to the CIA, he had outlived his usefulness. In this sense, the U.S. invasion of Panama was a clean-up operation and a police action with the Panamanian militias not being a match for the might of the U.S. Marines and the U.S. Airborne.

Armor-wise, 14 M551 Sheridan tanks were used in the operation with 10 air-dropped from low-flying C-130s at the Torrijos-Tocumen Airport shortly after its capture. Two were destroyed in the process. The other four Sheridans were transported to the area in secret a month prior to the operation.

These four took part in the attack on the Panamanian Defense Force HQ, also known as “the Comandancia”, and saw some of the toughest fighting in the operation. One of these four Sheridans was called “Airborne Thunder” and belonged to Company C of the 3rd Battalion, 73rd Armor Regiment, 82nd Airborne Division. The tank survived the operation unscathed and would later participate in Operation Desert Storm before returning to the USA and finally being decommissioned. After its active service ended, it underwent a restoration process to make it look the way it did during Operation Just Cause and can now be seen at the U.S. Army Airborne and Special Operations Museum in Fayetteville, North Carolina.

Now to bring those two stories together, our skin is based on the following premise: “What if the U.S. Airborne had been equipped with the Armored Gun System vehicles – in this case, the M8 – at the time of the Panama invasion?”

Naturally, this is all a bit anachronistic. The operation took place in 1989 while the first prototype was only unveiled in 1993. Furthermore, the 120mm version would appear a decade later. Perhaps the actual armor developers in the Armored Warfare universe were fast enough to make the vehicle appear four, five years earlier? 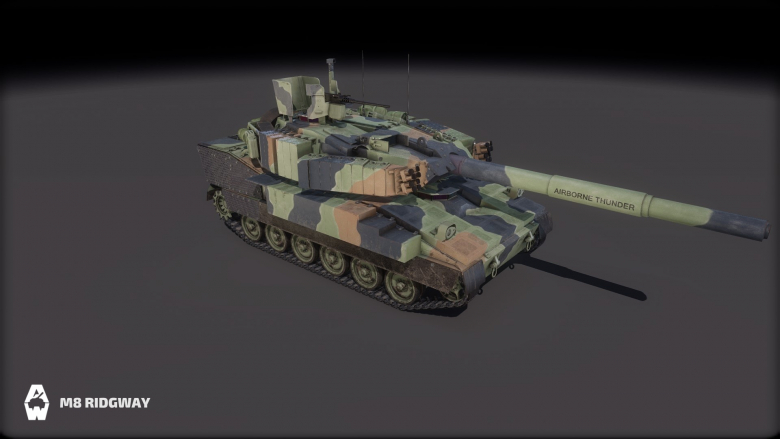 The truth is, in this case, we decided mostly based on player feedback. The Thunderbolt is a more popular vehicle than the Buford and we wanted to give you not only an interesting backstory, but also a practical skin that could be used on everyday basis.

As you can see, aside from improving its overall quality, we adjusted the Thunderbolt model with numerous smaller details. The tank now bears the standard 1986 NATO camouflage that was painted by the museum staff over the original sand color, since the actual Airborne Thunder Sheridan participated in Operation Desert Storm. 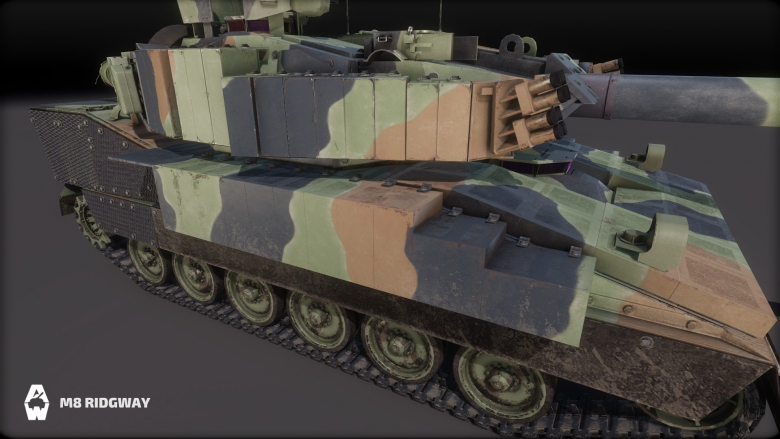 At places, you can see the original sand color shining through. 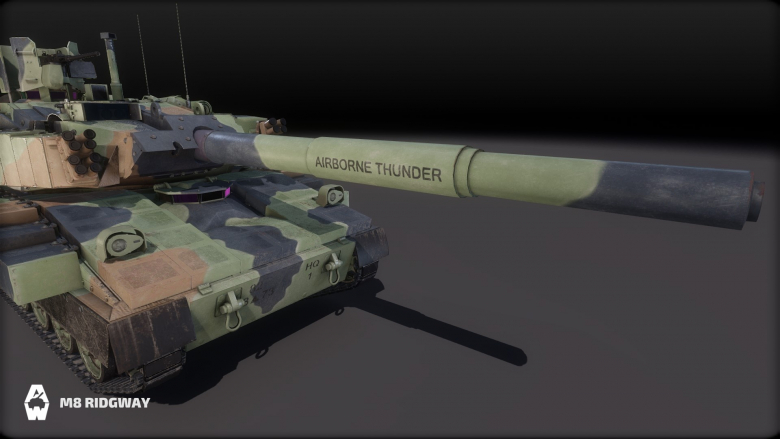 The gun proudly bears the name Airborne Thunder, with the tactical markings of the 82nd Airborne Division, 73rd Armor Regiment and 3rd Battalion painted on the lower frontal and rear plates of the vehicle. 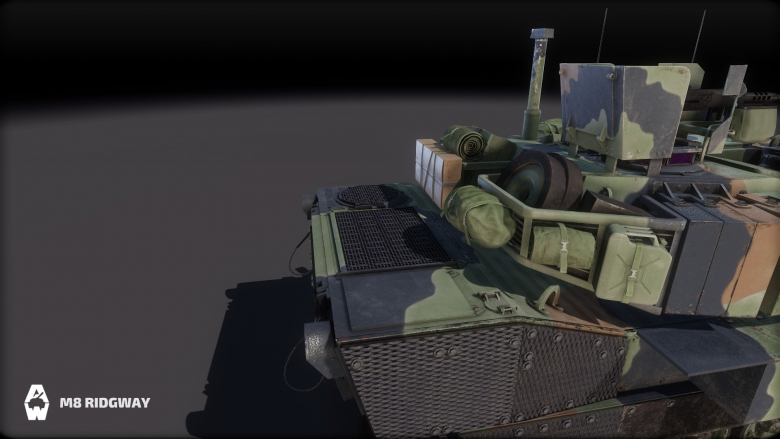 The turret of the vehicle is covered with various ammo boxes and items belonging to its crew. 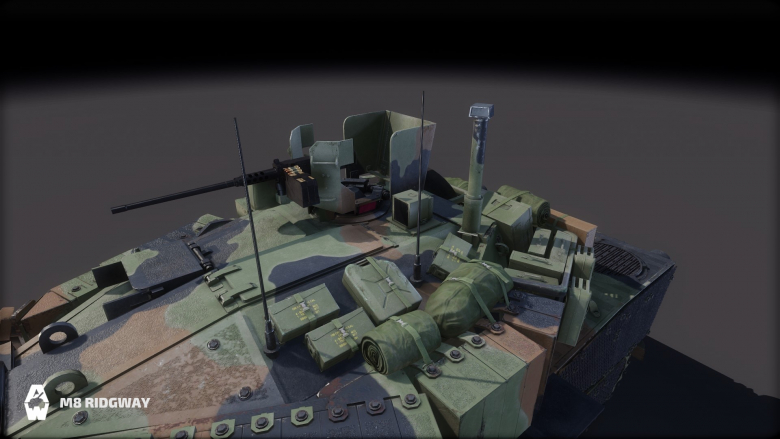 And, last but not least, .50cal anti-aircraft machinegun position is armored with extra anti-bullet plates, much like on the Sheridan.

With all that being said, only one thing remains to be explained – the name.

The tank is, of course, named after General Matthew Ridgway, the commander of, amongst many other things, the 82nd Airborne Division during the Second World War. But that’s not all there’s to it. 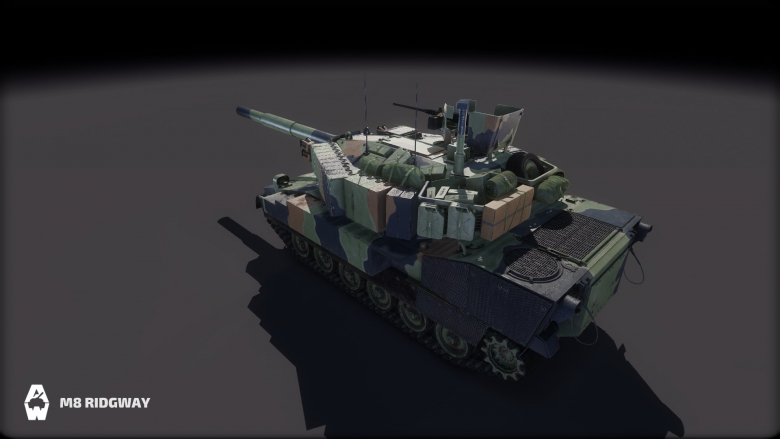 General Ridgway passed away in 1993, leading to some speculations that the next Light Tank for the Airborne would be name after him. This wasn’t the case and, to our knowledge, was never the plan, but, as it turns out, the source of these rumors was the notorious combatreform.org website, best known for Mike Sparks, a tireless crusader against the Stryker platform and a proponent of the M113 Gavin. 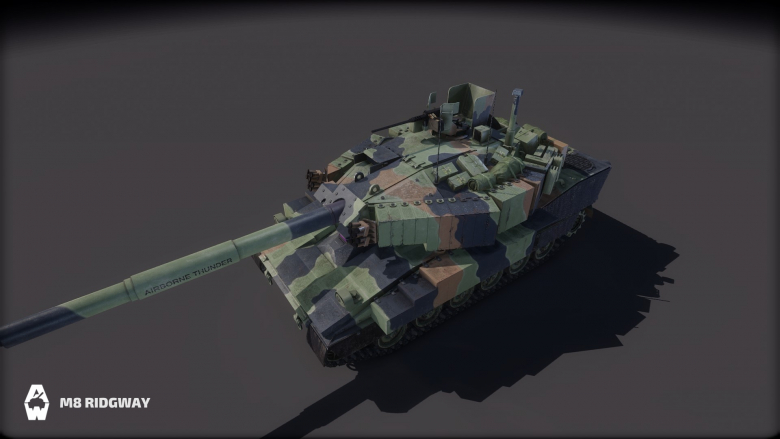 Despite the Gavin being an old running joke in western tank enthusiast circles, we find the whole meme endearing and the M8 Ridgway is as much a nod to combatreform.org, as it is to the bravery of General Ridgway.

We hope that you will enjoy the skin as well as the other items coming with it and, as always: