We recently announced the introduction of the T-15 Armata heavy IFV to Armored Warfare. The Russian T-15 is the ultimate development of the heavy infantry fighting vehicle concept, with enough armor and firepower to suppress the enemy while keeping troops inside safe, but it is by no means the only vehicle of its kind – or the first for that matter. Compared to this behemoth, the beginnings of the heavy infantry fighting vehicle class were somewhat more humble. Their modern history began in the late 1970s and early 1980s in Israel. One of the fundamental pillars of the Israeli designs is the emphasis on crew survival in combat. This is well illustrated by the Merkava. Interestingly enough, this emphasis is often mistaken for actual armor thickness, leading to the quite common misconception that the early Merkava tanks were extremely well protected. They were not. In fact, their armor was quite thin, but the chances of crew survival were an improvement over the older Centurion and Patton vehicles Israel used in combat. Both types suffered very high losses during the 1973 Yom Kippur War, leading to the death of many experienced Israeli tankers. 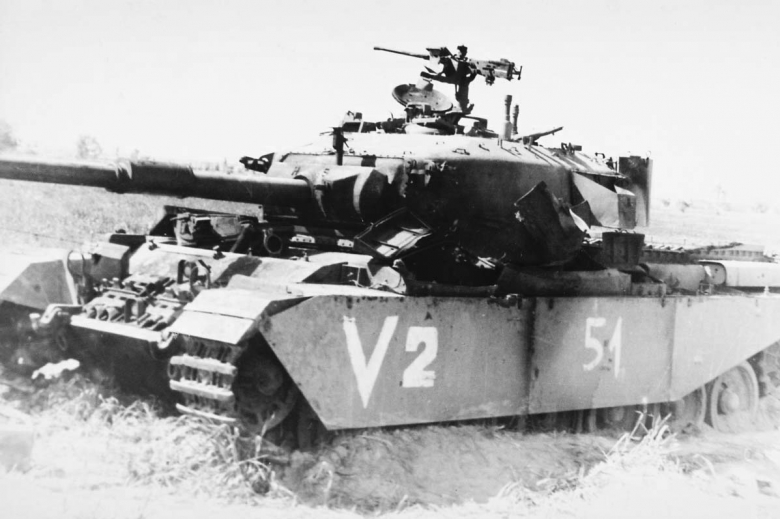 Israeli Sho't (Centurion) tank, destroyed during the Battle of Karameh, 1968

Care for the crew and transported troops (in the case of APCs and IFVs) was also reflected in future Israeli military considerations. By 1982, the standard APC of the Israeli Defense Forces was the American M113. Overall, it was not a well-protected vehicle and its vulnerabilities (especially to guided missiles and infantry anti-tank weapons) were demonstrated during the 1982 conflict between Israel and Lebanon (Operation Peace for Galilee). By the end of that war, it was clear the Israeli forces needed something with better protection to transport the troops around the battlefield. There were several attempts to upgrade the M113 protection, such as the Zelda and Zelda-2 armor kits, but their effectiveness was limited. 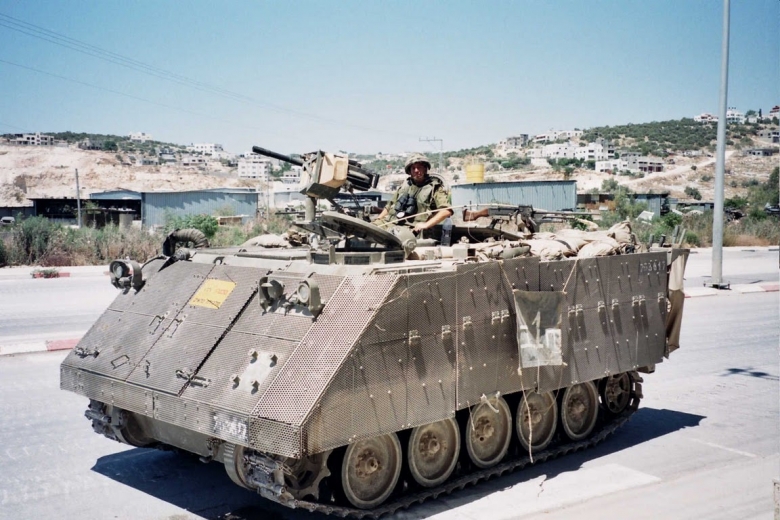 Another point to consider was the Israeli rejection of the BMP concept. A number of BMP-1 vehicles were captured during the Yom Kippur War. After the fighting had ended, the vehicles were carefully examined by Israeli and American specialists. They concluded that the BMP-1 was too lightly armored to be of any use to Israel. The Israelis found the entire concept deeply flawed, although much of the initially poor impression was down to improper use of the vehicle as well as poor training of the Syrian forces that used them (the Egyptians fared better and the majority of the captured BMPs came from Syria). The need to better protect crews and passengers combined with the rejection of the classic IFV concept (embodied by the BMPs at the time) eventually led to some unorthodox solutions, such as converting obsolete tanks into armored personnel carriers. 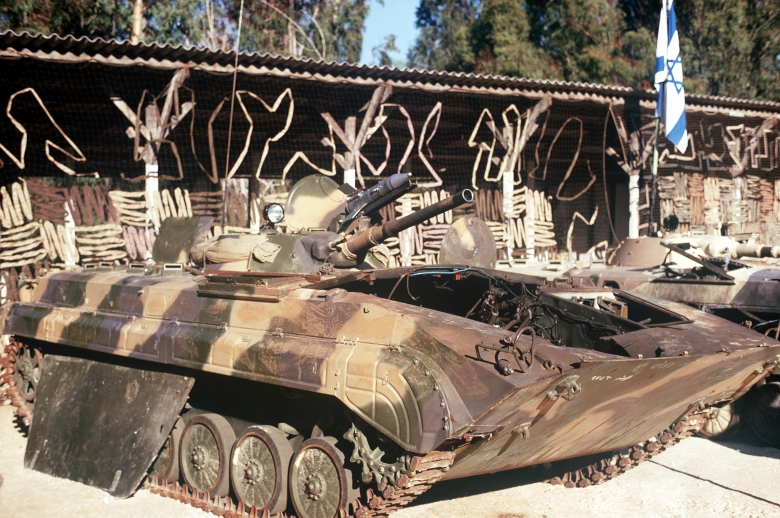 Converting tanks into APCs was nothing new. The Mark IX British tank, commonly regarded as the first armored personnel carrier, was used during the First World War to transport men across the muddy fields of Europe. During the Second World War, the Canadians converted a large number of Ram, Priest and even Churchill vehicles to the "Kangaroo" version – a turret-less variant designed to carry troops inside. Israel itself used this class of vehicles in the late 1960s and early 1970s in the form of the Sherman Medical Evacuation Tank (commonly known as the "Sherman Ambulance"), a heavily armored vehicle that could carry a medical team and four wounded. 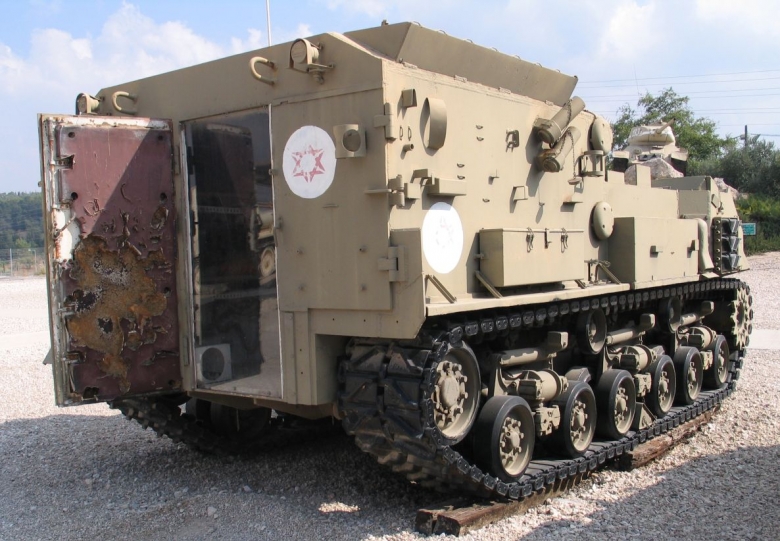 This approach was a success and these heavily armored vehicles saved many lives, but the protection offered by the old and worn-out Sherman hull was not the best. It was a good concept, however, and it was further developed in the 1980s to provide Israel with a heavy armored personnel carrier that could be used in the asymmetric warfare the Israeli units often found themselves involved in.

The first of these heavy APCs specifically developed for the abovementioned purpose were the Nagmashots. They were converted Israeli Centurions (called Sho't in Israeli service). The name Nagmashot combines the name of the tank and the word Nagmash, which is Hebrew for Armored Personnel Carrier. They were basically Centurion hulls with a new, thick and boxy superstructure on top of them instead of a turret. The weight of the basic Nagmashot is estimated at 45 tons. They could carry six men (plus the driver and the vehicle commander) and while the protection this basic version offered was no higher than that of the classic Centurion, it was still a huge improvement over the considerably lighter M113s.

Nagmashots were also usually retrofitted with the Blazer explosive reactive armor kit and later on also with additional side armor plates. Their armament usually consisted of a combination of machineguns and, much like the vehicles themselves, it was not quite standardized. A large number of Nagmashot variants appeared over the following decade, combining various offensive and defensive elements.

The second generation of Centurion-based APCs appeared in the late 1980s. It was called Nagmachon and, unlike the Nagmashot, it was a specialized vehicle for low intensity conflicts and counter-insurgency operations. Most of the Nagmachons were built by converting the original Sho't hulls, but some were also converted from the Nagmashots. 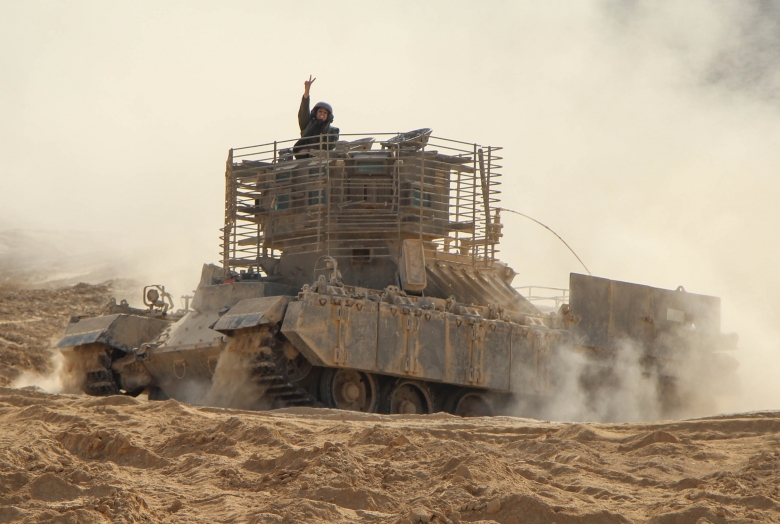 The Nagmachon could carry ten men and offered improved protection compared to the Nagmashot, especially from infantry-fired HEAT-based weapons, improvised explosive devices and mines. The sides were covered by reactive armor plates while the top of the superstructure was protected by armored shields. The bottom was reinforced to contain a mine or IED blast. The vehicle was only armed with light machineguns, a completely sufficient armament given the intended purpose. To enhance its protective abilities even further, the Nagmachon was equipped with IS-10 smoke grenade launchers (said to be able to fire explosive grenades as well).

There was also a modernized version of the Nagmachon – it was called Mifletset (Monster). The top shields of the superstructure were replaced with a boxy "bunker" (also called doghouse), a fully enclosed machinegun nest for the troops to fire from while being protected from enemy snipers. Some variants also had this superstructure enclosed in a cage armor kit to even further enhance the anti-HEAT protection. The Nagmachon is currently still in Israeli service.

The third generation Sho't-based APC, called Nakpadon, appeared in the early 1990s and was accepted in service in 1993. Much like the Nagmachon, it was built partially from the old Sho't hulls and partially by upgrading the older Nagmashots and Nagmachons. Its protective capabilities were further improved compared to its predecessors by the addition of modernized ERA plates covering practically the entire vehicle. This armor kit was developed by Israeli Military Industries and consists of layers of steel, aluminum and rubber with explosives laid between them. The vehicle also boasted improved IED and mine protection. 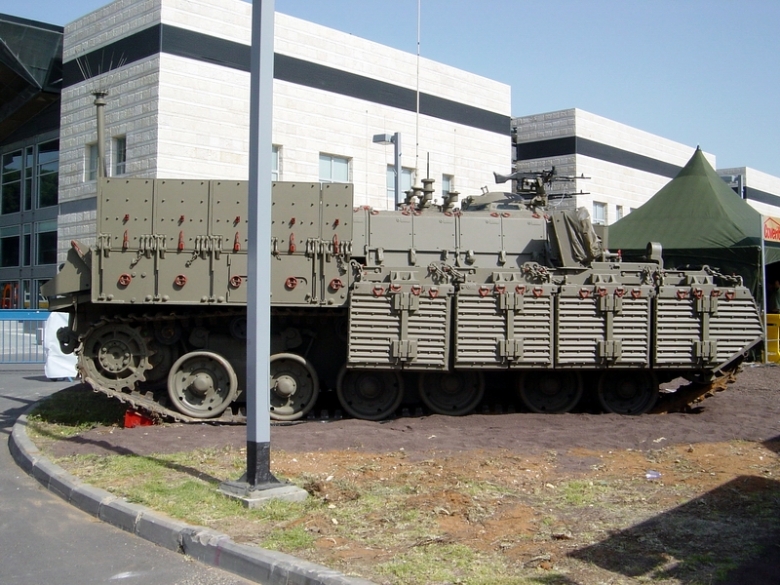 Firepower was enhanced by the addition of a 40mm Mk.19 automatic grenade launcher. Additionally, the vehicle carried two jammers, developed to disrupt IED ignition systems. The price for improved protection and extra equipment, however, was an increase in weight – Nakpadon weighed well over 50 tons (compared to the 45 tons of the earlier variants). To prevent the vehicle from becoming too sluggish, the old 750hp powerplant was replaced with a new Teledyne Continental AVDS-1790-6A 900hp engine, as used in the early Merkava tanks.

The Nakpadon is currently still in active Israeli service. In addition to the "standard" Nakpadon variant, two specialized and rather obscure variants exist:

The final Centurion-based Israeli variant is the Puma. It can be counted as a heavy APC thanks to its ability to carry men, but, rather than a dedicated armored transport, it is a combat engineering vehicle, crewed by IDF engineers. The name of this vehicle does not actually intentionally refer to a feline predator. It is an acronym that stands for Poretz Mokshim Handasati – Minefield Breakthrough Vehicle.

The Puma was introduced to service in 1991 and typically has a crew of eight men – commander, gunner, driver and five combat engineers. Unlike the other Centurion-based APCs, the 50-ton Puma relies heavily on its thick armor instead of the ERA kit to make it as blast-resistant as possible. The vehicle is armed with a Rafael Overhead Weapons Station machinegun-equipped remote-controlled turret and several machineguns. It can be equipped with a mine-clearing roller (RKM Nochri) or a dozer blade as well as with the Carpet rapid mine-clearing system (rocket-propelled explosives clearing 100 meters long minefield strip by their blast force). Another optional piece of equipment is the Thor system, consisting of a 700 Watt laser designed to detonate IEDs at long ranges. There are several specialized Puma variants and the Puma is currently the most common Israeli combat engineer vehicle.