Ever since the Second World War, France has built its armored vehicles light and fast. The AMX-30 Main Battle Tanks had the same roots as the German Leopard 1, both highly mobile at the expense of protection. Another example is the French AMX-13, one of the most common and successful post-war light tanks in the world. 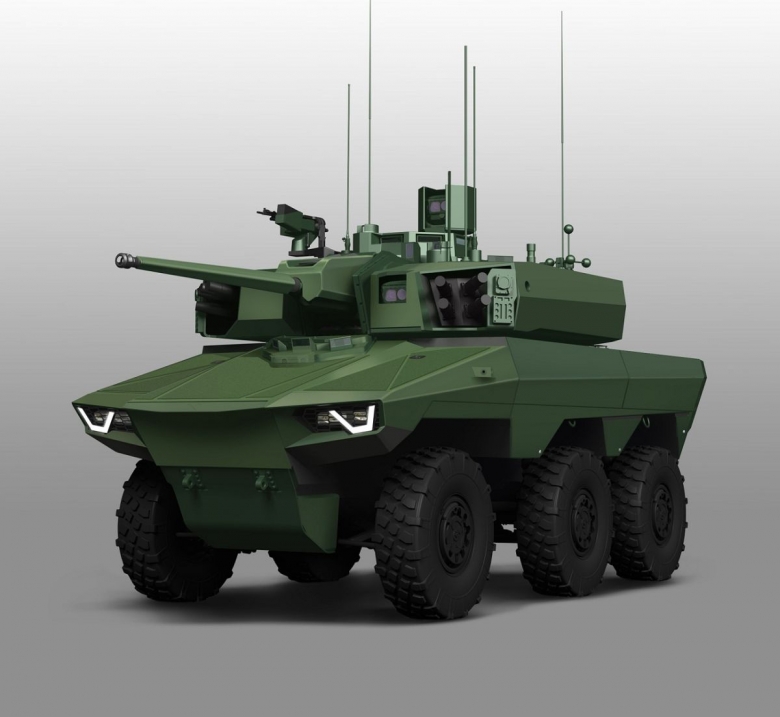 This approach naturally influenced the wheeled vehicle development as well, with excellent vehicles like the ERC 90 Sagaie or AMX 10 RC being produced over the last four decades. It is therefore only natural that the French military is keen on continuing the tradition of highly mobile armored forces. On the other hand, the age of the abovementioned vehicles is starting to show, which is why a new program was initiated to replace them with modern designs. This program is called Scorpion.

The Scorpion program is based on the French Ministry of Defense’s plan to create a new family of highly mobile light vehicles, capable of rapid response and deployment to various parts of the world, and of participating in both low and high intensity conflicts. This family is intended to not only consist of armored personnel carriers, but also of fire support vehicles, capable of dealing even with advanced enemy armor.

The financing for this program is quite generous, with the Ministry of Defense planning to spend 5 billion Euros until 2025 for vehicle development and construction (with another 5 billion planned for the following decade). To compare this amount to other countries, Great Britain plans to spend 4.4 billion Euros (3.5 billion GBP) for its 589 new Ajax IFVs. 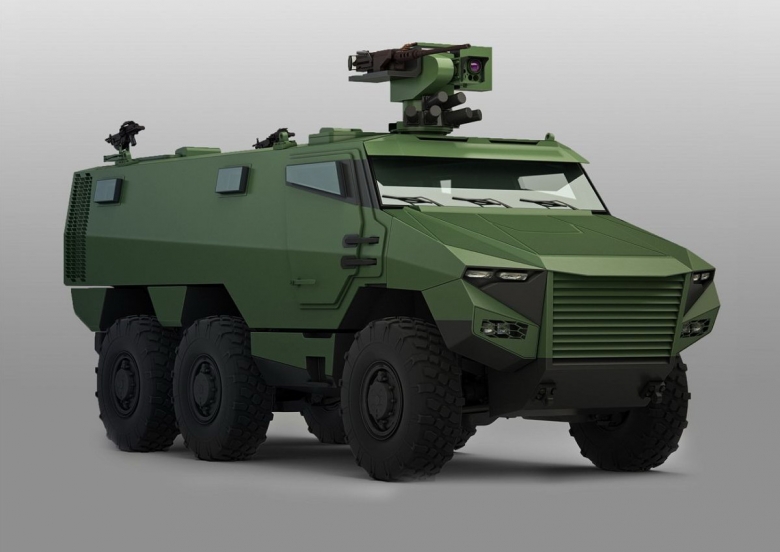 The lead development group of the program is GME (Groupement Momentané d'Entreprises), which consists of three major French companies: Nexter, Renault Trucks Defense (RTD) and Thales. Nexter and RTD are responsible for the chassis and weapons systems while Thales is developing electronics, sensors and communications.

There are two main vehicle groups in the program:

The EBRC part is represented by the Jaguar. The other competitor in the program – the SPHINX by Panhard – seems to have lost the contest in Jaguar’s favor and will only remain in the prototype stage.

Much like the SPHINX, the Jaguar is a 6x6 armored fighting vehicle that carries a crew of three (commander, gunner and driver). It weighs 25 tons and is powered by a 490hp engine (20 hp/t power-to-weight ratio). Its range with internal fuel tanks is 800 kilometers. It’s worth noting that the rear axle can be used for steering as well, significantly decreasing the vehicle’s turning radius.

The Jaguar’s armament consists of one 40mm 40 CTC automatic cannon (together with its feed and FCS forming the Cased Telescoped Armament System) and MMP guided missiles in an advanced turret. The gun is compact but powerful, capable of dealing with even the most modern IFVs. Its APFSDS tungsten core rounds can penetrate 140mm of RHAe at 1500 meters, for example. Should that not be suffice, the Jaguar’s MMP tandem warhead missiles can penetrate up to 1000mm of RHAe and have a range of 4000 meters.

The Jaguar’s gun depression and elevation values are -10/+45 degrees and thanks to an advanced stabilization system, the vehicle can engage targets on the move even in difficult terrain. The gun’s rate of fire is 200 rounds per minute. 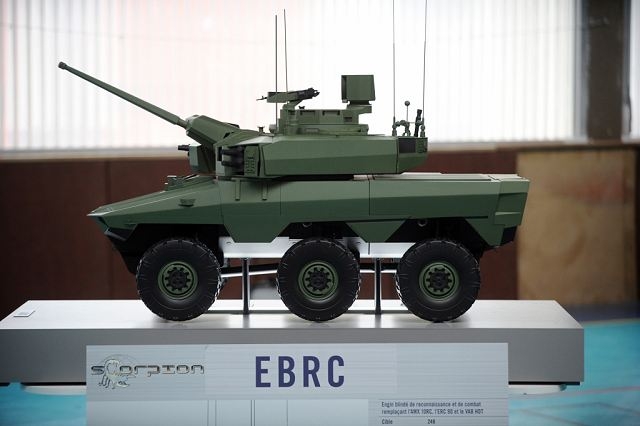 Its armor is STANAG 4569 Level 4, which means frontal protection against 14.5mm AP bullets and 155 HE shell fragments at 30 meters. It’s worth noting that the frontal wheels are not covered by ballistic shields, sacrificing protection for increased off-road capabilities, an important factor for any deployment in third world countries. The bottom of the vehicle is protected against explosions equal to 10 kilograms of TNT.

One of the most important features of the Jaguar is its ability to interact with the French Army’s next-gen C4ISTAR command and control systems, allowing commanders to have unprecedented battlefield overview thanks to the cutting edge technology involved.

Currently it is still in prototype stage, but the first mass-produced vehicles are to be delivered by 2020. The French plan to have 110 vehicles delivered by the end of 2025.

Unlike the Jaguar, the Griffon is a relatively simpler and more affordable vehicle. While the vehicle is officially listed as multi-purpose, its main task will be to transport infantry as an APC. The Griffon is a rather straightforward design – a boxy hull available in either 4x4 or 6x6 configuration. At first glance it heavily resembles another vehicle by Nexter, the Titus (developed in cooperation with Czech company Tatra), but Nexter claims that the Griffon is very different and the Titus is an export project only. 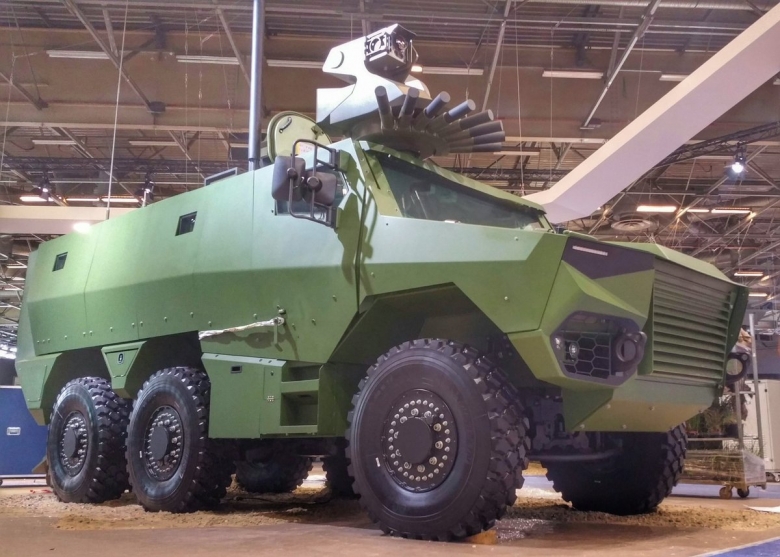 The Griffon has a crew of three and can carry up to eight troops (ten in its most recent Eurosatory 2016 configuration).

Griffon’s armor is STANAG 4569 Level 4 (like the Jaguar’s), but its protection levels can be increased by installing a modular armor kit. Standard armament includes either machineguns (7.62mm and 12.7mm) or a 40mm grenade launcher. The vehicle weighs around 25 tons depending on configuration and is powered by a 400hp Volvo engine.

There are plans to deliver 1722 Griffon vehicles (in both 6x6 and 4x4 configuration) to the French Army in total with the first starting to arrive around 2018. There will be five main variants of the Griffon:

These variants will in some cases be subdivided further, but still represent an improvement over the current French VAB vehicle family (over 30 variants). Like the Jaguar, the Griffin will also be connected to the C4ISTAR command and control system, one of the main features of the Scorpion program.

The French military generally prefers wheels over tracks. While the tracked vehicles have better off-road capabilities, they are also more expensive, maintenance-intensive and have high upkeep costs in general. The majority of the armed conflicts in which the French military participated after the war took place in former French colonies, especially in Africa. Wheeled vehicles are more practical for that type of conflict: they are easier to transport and can cross large distances on their own. They are also not as maintenance-intensive and can generally be operated in such environments without having to worry about costly breakdowns.

This strategy continues with the Scorpion program and while the Jaguar is not intended to engage the bulk of enemy armor head on, it will surely excel in recon roles, flanking maneuvers and ambushes. Full-scale armor versus armor fighting (should the worst occur) will then be taken care of by the newly upgraded Leclerc MBT (also introduced during the recent Eurosatory 2016 expo).