An article from our guest community authors - PanzerAce and Life_in_Black

Seventy-five years ago, the most successful medium tank of World War Two, the M4 Sherman, completed the design selection process for the replacement of the M3 Medium tank. Born out of design characteristics laid down by the United States Ordnance Department on August 31 1940, the simplest of 5 designs, carrying over many features of the Lee / Grant, was selected for mass-production. Known as the T6, this 1941 tank was a modern vehicle with sloped armor that carried the sufficient turret ring diameter to carry a high velocity 75mm main gun, which other Allied tanks (such as the Crusader and Ram) had lacked. That capability eventually became the late WW2 standard and a requirement for a successful medium vehicle. The production version of the T6 tank prototype would become the famous M4 General Sherman. Today, we will take a look at its legacy – the modernized versions.

Contrary to the factually inaccurate book "Death Traps" by Belton Cooper, the Sherman was a good tank for its day. Given its resistance to 50mm guns frontally, impressive anti-infantry performance and large capacity for upgrades, it can be regarded as a highly reliable and capable medium tank. Operationally, heavy, troublesome designs such as the Panther or the very uncomfortable T-34 could not compete with its versatility or, with the 76mm or 17 Pounder firepower upgrades, gun performance. After the war, this reliable and inexpensive vehicle was heavily exported thanks to its value, reliability and general American doctrine of the time. Naturally, as tank design progressed into the 1950s and beyond, many countries decided to upgrade their Shermans to keep them relevant as tank-fighting vehicles. Countries such as Israel, Argentina, Egypt and Chile developed massive upgrades for this tank, with the Israeli variants crushing the technically superior tank competition in battle, making them excellent candidates for introduction to Armored Warfare. Now, seventy-five years on from the initial design, let's examine the international Sherman gun-tank modernizations.

Israel is no doubt the most famous of the so-called "Super Sherman" designers. Two main gun tanks were used, the M-50 and the M-51. These, however, were not an entirely domestic design. The French renewed their postwar armaments export industry with multiple versions that would be purchased for license production. 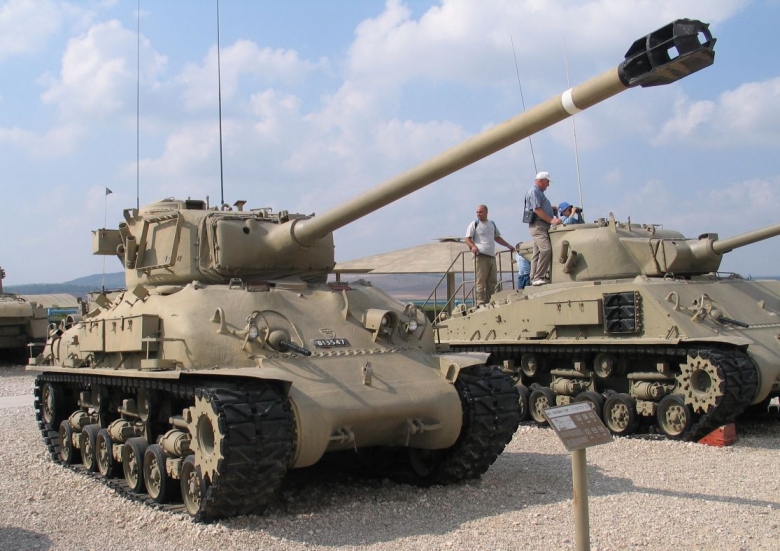 After acquisition of the AMX-13 from France in around 1953, Israel also purchased the French 75mm CN-75 50 cannon by itself from France and became interested in upgrading their M4 Shermans with it. After testing it in both Israel and France on a M10 Gun Motor Carriage, the French settled on the 75mm M3 armed turret to carry it and this design became standardized as the M-50. An initial shipment of M-50s from France arrived in Israel in time to see action during the 1956 Sinai Crisis, with Israel still converting older Shermans into the M-50 up through the early 1960s.

With the Soviets beginning to ship more modern weapon systems to Egypt and Syria in the late 1950s (including the T-54/55), Israel began to panic and in 1961 it turned to France again to upgrade the Sherman once more, this time with a powerful long-barrel French 105mm cannon capable of taking on the latest in Soviet armor using HEAT ammunition. The M4A1 chassis was chosen, as was the 76mm armed "T23" turret, and the resulting vehicle, the M-51, entered Israeli service in 1962. Both the M-50 and the M-51 served throughout the Six-Day War and the Yom Kippur War, where M-51s went up against even deadlier T-62s with good results. Subsequently, these Shermans were relegated to reserve units and were eventually phased out or sold off. However, some of these tanks were converted into artillery. These include: 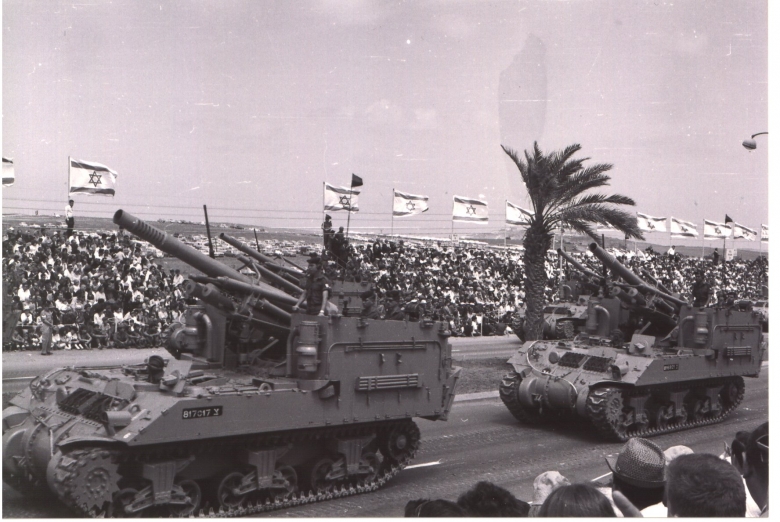 L-33 Ro’em: The M-50 155mm wasn't well liked due to its open design, leaving little protection for the crew. This resulted in a new vehicle using the Soltam M68 155mm L/33 cannon, a license-produced weapon from Soltam's parent company Tampella in a fully enclosed super structure. 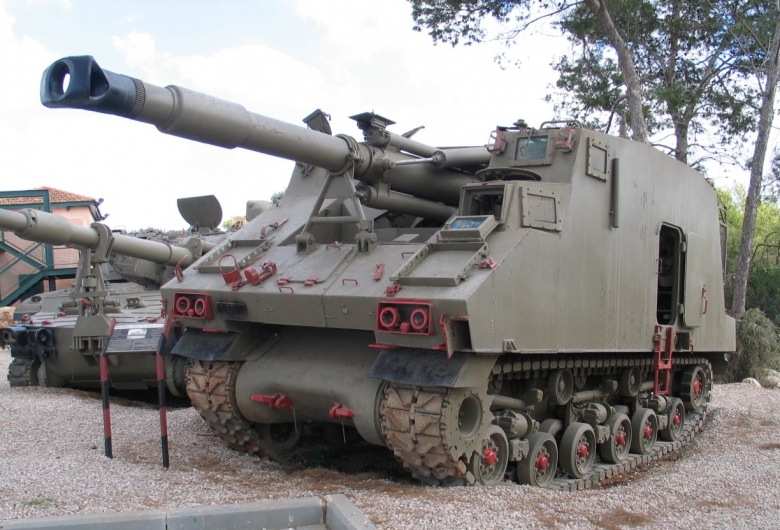 Makmat 160mm: The Makmat 160mm entered service in the early 1960s as a heavy carrier for the Soltam M-66 mortar. It was an extremely potent weapon, utilized in the Yom Kippur War and again in 1982 during the Peace for Galilee operation.

Egypt also used an upgraded Sherman in combat. Unlike France and Israel, who modified all Sherman variants throughout the 1950s to use the Continental R-975 radial engine, Egypt's Shermans all consisted of the M4A4 model and the Chrysler A4 multibank engine was replaced with the General Motors 6046 twin diesel engine, resulting in an M4A4/M4A2 hybrid. When it came to armament, Egypt opted for the easier, albeit worse, choice to upgrade their Shermans and bought AMX-13 FL-10 turrets from France. Used during the 1956 Sinai Crisis, these vehicles fared poorly and Israel captured about a dozen of them, later converting them into M-50s.

Chile has long felt the need to remain one of the more powerful nations in South America. Already being familiar with the M4 Sherman through post-war American exports, Chile opted to acquire M-50 and M-51 Shermans from Israel from 1979 onwards. By this time the old Cummins engines were worn out, and so, in the early 1980s, new Detroit Diesel 8V71T engines were retrofitted into the Chilean Shermans with Israeli assistance. Although Chile did not see the M-51's 105mm cannon as being effective enough in the anti-tank role, it was still regarded as useful due to the powerful anti-infantry rounds it could fire. On the other hand, the 75mm M-50s were seen as completely obsolete and were retrofitted with Israeli assistance with the new 60mm IMI HVMS cannon, which was capable of penetrating the front of a T-62 at 2500 meters. This rearmed vehicle became known as the M-60, although it is unclear whether this name was ever official. The M-60s and M-51s would supplement and serve alongside Chile's more modern Leopard 1s and AMX 30s for many years. It's worth noting that the Chilean M24 Chaffees were rearmed with the same 60mm HVMS cannon as well.

Argentina found itself in its own South American arms race with Chile, again feeling the need for a better anti-tank weapon to deal with potential enemy threats. A similar upgrade to the Israeli M-51 was chosen with French assistance in the mid-1970s, fitting the 105mm CN-105-57 L/44 cannon to their existing fleet of Sherman Fireflies and changing the engine to the French Poyaud 520 325hp diesel. This conversion became known as the Repotenciado and it served in Argentina until it was retired in the early 2000s, long after its more modern light tank replacement, the TAM, entered service.

Some less stellar or not so well-known versions of postwar Shermans also existed. In Yugoslavia, a Soviet 122mm A-19 field gun was mounted onto a Sherman along with the 500 horsepower engine from a T-34 in an attempt to improve the anti-tank capabilities and service life of the vehicle. The project, known as the SO-122, was, however, cancelled – the cramped turret and horrible gun elevation angles made it incapable of supporting infantry or firing indirectly. India experimented with tanks similar to the M-50, mounting the D-56T and CN-50 cannons from the PT-76 and AMX-13, respectively, inside a Sherman during the earlier Indo-Pakistani wars. However, due to the advantages of the PT-76 flotation alongside the Sherman's marginal protection advantage over these tanks, the conversion was not widespread and only one example of each survives. 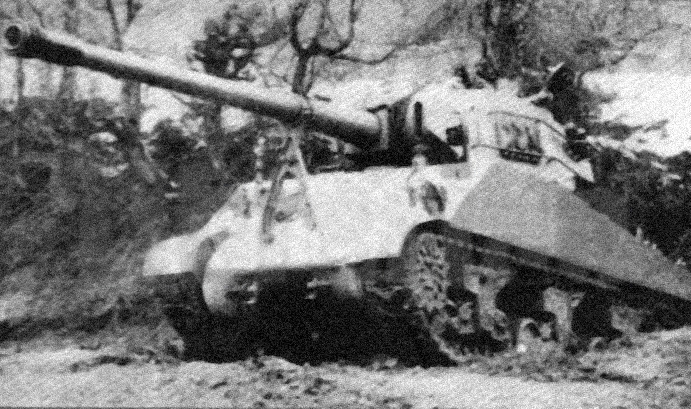 SO-122, photo by Predrag Popovic

Although most Shermans have by now been retired, there are some nations who still use it in army service. Recently, Paraguay reactivated their Repotenciado tanks, which were donated by Argentina, for use as training vehicles along with their WW2 vintage M3 Stuart light tanks. Although these tanks are doubtlessly obsolete when fighting modern armor, there remains a chance that the powerful 105mm HEAT and HESH, or even the 37mm main gun of the Stuart, could be used to combat light armored vehicles, infantry, and early MBTs to quite humiliating effect.

In Armored Warfare's timeframe, the base Sherman would be over 100 years old. However, the M-50 / 60, M-51, Repotenciado, M4 FL-10, SO-122 and other versions of artillery Shermans could, in theory, be realistically used as perfectly serviceable low tier tanks, tank destroyers or artillery, providing that the PMCs use them to fight in low intensity conflicts.

Combat Vehicle 90: Under the Hood