In our previous article, we have mentioned the difficult development of the tank support vehicle class in the Soviet Union and later in Russia. Today, we are going to have a look at the ultimate development of the concept, the Russian BMPT vehicle family.

The BMPT (which stands for “tank combat support vehicle”) was developed as the result of the experiences from the past. The producer designation however is “BMOP” (stands for “fire support vehicle”) as well as the unofficial (commercial) one: the “Terminator”. It is a heavily armored vehicle based on a regular tank hull, built to support tanks against both soft and armored targets although its capability to engage enemy armor is limited by the amount of anti-tank guided missiles carried.

The Uralvagonzavod company picked up where its predecessors left off and designed a vehicle using a modified hull of either the T-90 or the T-72 main battle tank. This allowed the factory not only to produce using well-established procedures but also to actually convert existing vehicles to the BMPT standard by switching the old turret with the BMPT one. The first mock-up was shown to the public in 2000. Originally, the vehicle was supposed to be armed with one 30mm 2A42 cannon (paired with a machinegun) and four older 9M133 “Kornet” missile launchers but soon a second 30mm gun was added to the turret and the missile launchers were replaced by the more advanced “Ataka” weapon system. Secondary armament consists of a pair of 30mm AG-17 grenade launchers.

The vehicle is heavily armored – apart from the standard protection of the T-72/T-90 hull, a “Relikt” ERA system was installed to enhance the survivability of the vehicle against HEAT projectiles, commonly fired by infantry AT weapons.

The crew consists of five men (commander, driver, gunner and two grenade launcher operators). The vehicle is usually powered by the engine of the “host” tank (either the 780hp engine of the T-72 or the 1000hp engine of the T-90), influencing the performance of the vehicle (although the general maximum speed is listed by the producer as 60 km/h for both models).

Read more about the development of the Terminator here. 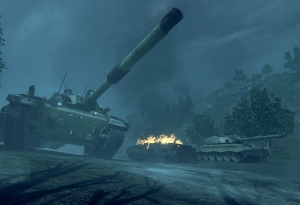