Without any doubt the best-known KTO Rosomak varieties are the personnel carrier and the Polish military APC, but the Rosomak (and its parent Patria platform) are designed to be as customizable as possible, and the list of possible modifications and variants is very wide indeed: it includes, for example, a command vehicle, an armored ambulance, or a proposed air defense vehicle. 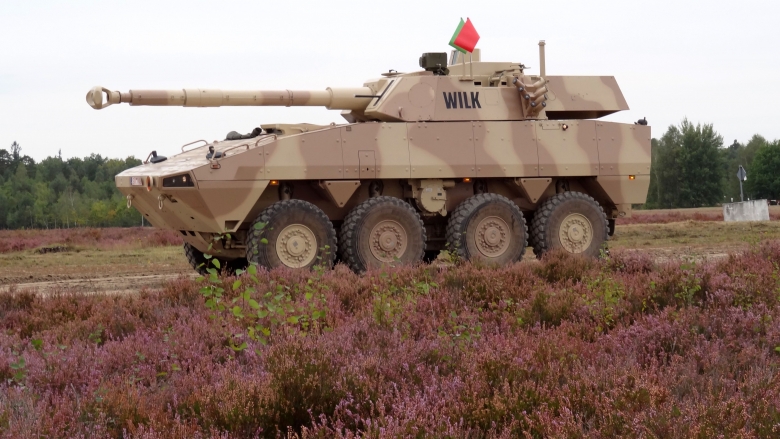 WWO Wilk with the Cockerill CT-CV turret, photo by CMI

But the most heavily armed variant is definitely the fire support variant, armed with a powerful 105mm (or even 120mm) cannon. It’s known under the shortcut of WWO (Wóz Wsparcia Ogniowego, Fire Support Vehicle), but is generally referred to as ‘Wilk’ (Wolf).

The idea of wheeled fire support vehicles is definitely not something new: the concept being widely used by the western militaries, for example in the form of the American M1128 Stryker. Having the firepower of a Main Battle Tank on a light and fast-wheeled chassis is a tempting prospect indeed, and it is therefore no wonder that the Polish military is considering implementing the same class of vehicles into its infantry unit structure.

While an infantry formation alone generally cannot withstand a concentrated armored assault on its own, NATO tests and exercises have shown that attaching a FSV platoon equipped with 105mm gun vehicles to an infantry formation significantly increases the unit’s chance of inflicting severe losses to the enemy. These conclusions were confirmed by series of simulations, ran by the Land Forces Officer School in Wroclaw: it turned out that attaching FSVs to a Polish mechanized infantry battalion would in some cases allow the formation to stop a tank advance dead in its tracks.

WWO Wilk with the Cockerill CT-CV turret, photo by CMI

Furthermore, mounting a fire support module on the same chassis as the standard army IFV significantly reduces the costs and logistic requirements for that particular vehicle—the costs that are already considerably lower for wheeled vehicles than they would be for tracked ones.

The Wilk is the WZM (the KTO Rosomak producer) and CMI Defence (the Belgian turret producer) response on these considerations. It is a KTO Rosomak hull with a Cockerill CT-CV 105HP turret.

The turret is also offered by CMI independently as the means to customize other armored vehicles. It’s armed with CMI’s 105mm CV automatically loaded gun, capable of firing all standard NATO ammunition as well as Cockerill’s own M1060CV shell (capable of penetrating 560mm armor at 60 degrees and at 2000 meters).

In addition to that, the gun can also be used to launch the Cockerill Falarick 105 tandem HEAT warhead anti-tank guided missile, penetrating Main Battle Tank armor at distances of up to 5 kilometers (560mm post-ERA penetration). The turret can also be equipped with a 7.62mm or .50cal coaxial MG, a pintle-mounted anti-aircraft machinegun or a remote controlled weapons station on top. The gun can elevate to 42 degrees and depress to 10 degrees: the high elevation allows the vehicle to serve as light artillery and fire indirectly at around 10 kilometer distance.

The turret carries a crew of two (gunner and commander), and the protection is customizable with the maximum protection level being STANAG 4569 Level 4 (protects against 14.5mm AP machinegun rounds).

The 105mm caliber itself is a compromise of sorts; it can do most of the things considerably heavier 120mm caliber guns can, and at the same time allows the vehicle to keep its mobility comparable to the variants armed with autocannons. 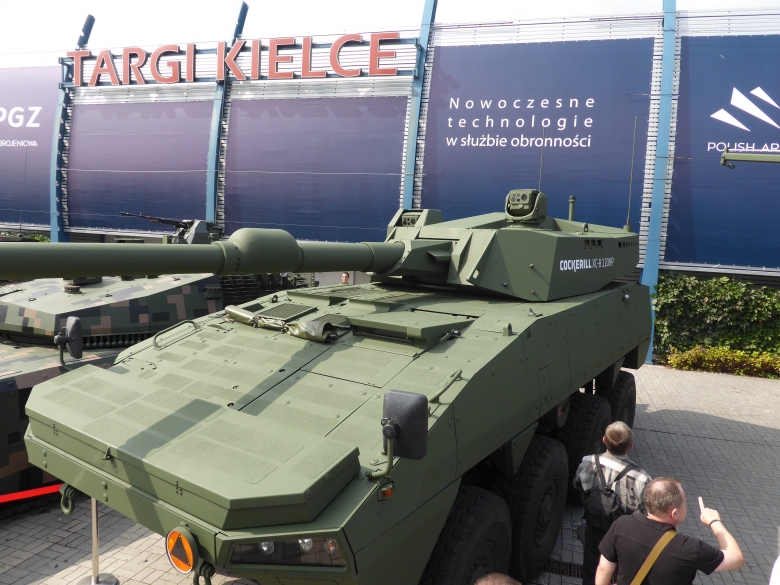 A prototype of this vehicle was built and tested in 2012. After passing the tests, it was offered to the Polish Armed Forces but failed to catch its attention despite the excellent trial results. The reason was that introducing yet another caliber to the Polish military (in addition to Leopard 2’s 120mm and T-72’s 125mm) was simply not an option.

Undeterred, WZM continued to negotiate with CMI Defence and the result of further development was the Rosomak chassis, equipped with the Cockerill XC-8 turret.

Unlike the previous turret, the XC-8 can mount a bigger gun: the Cockerill 120mm high-pressure automatically loaded L/50 smoothbore, capable of firing all standard NATO 120mm ammunition. Introducing the 120mm caliber to the Rosomak chassis solved the logistics demand of the Polish military that proved the downfall of the original Wilk. A 105mm variant of the XC-8 turret exists as well, but is not considered for the abovementioned reasons.

The low weight of the XC-8 turret allows the Rosomak to keep its mobility, while the 120mm gun is capable of engaging every target on the battlefield, including modern Main Battle Tanks. Apart from the standard NATO ammunition, prospective buyers have the option to order Cockerill-developed 120mm variant of the Falarick missile, capable of defeating modern armor at around 5 kilometers, like its 105mm sibling. 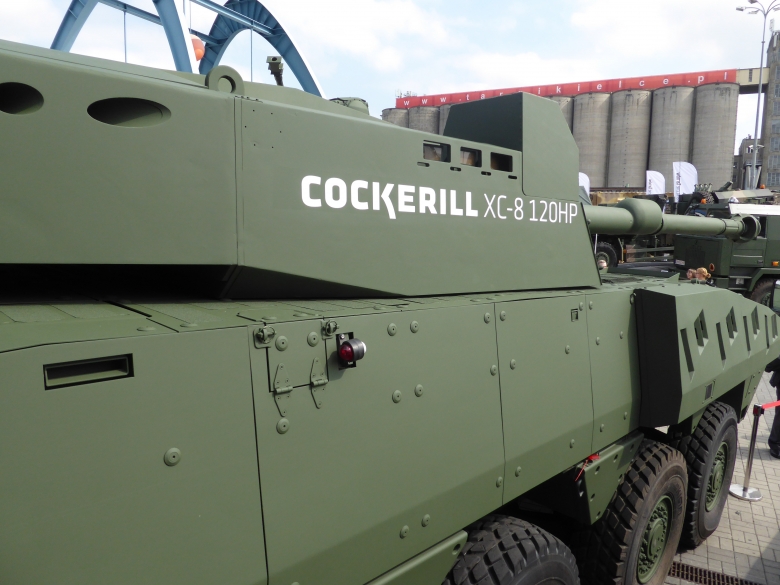 The turret crew also consists of two men. The gun can elevate to +20 degrees (losing the indirect fire capability of the CT-CV turret) and depress to –10 degrees. Much like the CT-CV turret, the XC-8 also has customizable protection levels with the maximum being STANAG 4569 Level 5.

A prototype Wilk with the XC-8 turret was unveiled to public in 2015 during the MSPO expo in Kielce, Poland and shown again in 2016. The vehicle was also offered to the Polish military, but at this point (October 2016), no definitive conclusion about its introduction or rejection was reached yet and there is no defined place for that kind of vehicle in Polish military unit structure. The Polish Army is currently pursuing several fire support vehicle directions (including the revived Anders platform and the WWB Gepard), making the future of WWO Wilk uncertain.

In Armored Warfare, the 105mm CT-CV turret Wilk and the 120mm XC-8 Wilk will be the top tiers of the upcoming Central-European branch. Fast, agile and powerful, these wolves will surely bite a sizeable chunk off the Armored Warfare battlefield after the introduction of Balance 2.0.