The story of the Anders Multi-Role Combat Platform (Wielozadaniowa Platforma Bojowa, WPB) mirrors to some extent the origin of the previously introduced Šakal IFV. They both started as an attempt to replace the aging Soviet-era arsenal with something more suitable for the modern battlefield.

The platform was named after General Władysław Albert Anders, a famous commander of the Polish forces in the Second World War, who fought bravely only to be persecuted by the communist regime after the end of the war, much like another Polish hero, General Maczek.

The initial idea was to transform the Polish armed forces to a highly-mobile force organized into Mechanized Brigades, equipped with either light wheeled vehicles (the Rosomak platform) or with tracked vehicles (the Anders platform). The Puma family of upgraded BMPs was also considered for the role, but the program was canceled earlier on.

The platform was developed by OBRUM Gliwice with the first variant introduced being a Light Tank or a Fire Support Vehicle. The designation of the vehicle was a source of some controversy – the platform was heavily constrained by the military weight demands in order for it to be air-transportable by the Airbus A400M cargo plane. The maximum weight of the vehicle was to be 35 tons, which meant that the armor had to be very light. Calling that particular Anders configuration a tank would therefore be quite a stretch – the vehicle was not able to slug it out with real Main Battle Tanks and was more suitable for the Fire Support role despite the company’s claims.

The actual development started in 2008. It took only 24 months to develop the platform and to build a demonstrator of the Light Tank configuration. The Light Tank configuration demonstrator was first introduced to public during the MSPO 2010 expo in Kielce, where it also received its official name after General Anders and was christened by his daughter. 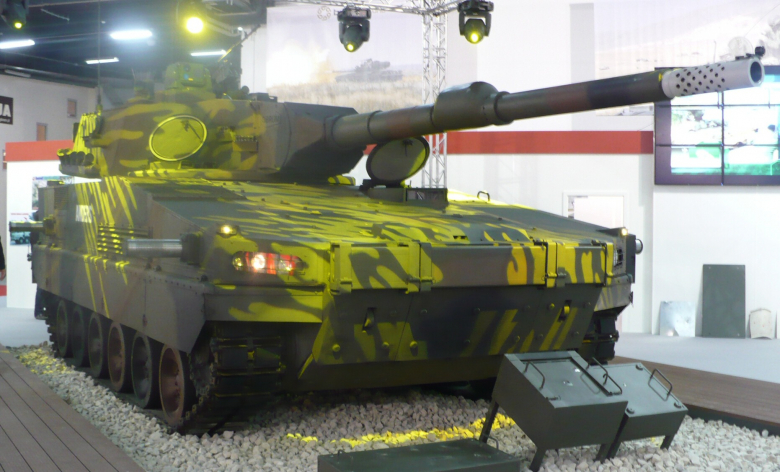 The prototype was intended for a crew of three men (driver, commander and gunner) and was made of welded steel plates (ironically, these plates were forged in the Czech Republic, not Poland). It was assembled at AMZ Kutno and then transported to OBRUM Gliwice where it was finished. The exact thickness of the plates was unknown but it was stated that the basic protection level of the Anders Light Tank was STANAG 4569 Level 3 (protection against 7.62mm AP rounds at 30 meters only).

The vehicle weighed approximately 33 tons and did therefore fit the military requirements (although the increase to Level 5 or Level 6 protection increased its weight up to 44 tons). It was powered by the German MTU 8V199 TE20 engine producing some 710hp, giving it an excellent power-to-weight ratio of 21.5 hp/t. If needed, the engine could up-tuned to some 800hp to handle the increased armor weight, but this change was not performed on the prototype, which was fast enough even with the standard variant – it had the maximum speed of 72 km/h. The suspension was a newly developed hydromechanical system with six roadwheels on each side and drive sprocket in the front.

The vehicle was equipped with a low-profile manned turret – the crew is sitting in the turret basked, but inside the hull. This solution generally increases the crew protection at the expense of internal volume and crew situational awareness since it has to rely on various periscopes and optics to see outside. The turret is armed with a Swiss 120mm RUAG smoothbore gun along with a coaxial 7.62mm UKM-2000C machinegun (the same type used in the Rosomak turret). The cannon was automatically loaded and takes ammunition from a 12-round magazine. The Fire Control System was of Polish origin, developed by Przemysłowe Centrum Optyki. The gun was not stabilized on the prototype, but the stabilization mechanism was developed for it.

The MSPO introduction of the vehicle was met with lukewarm response. The most common criticisms included the fact that the vehicle was under-developed at the time (missing stabilization was considered a major problem for a vehicle that effectively had to rely on mobility to survive) and its protection levels were considered insufficient (especially in contrast with the older T-72 variants it was supposed to replace). These issues resulted in the military’s dismissal of the project at the time.

Despite these setbacks, OBRUM continued to develop the platform, resulting in an IFV configuration demonstrator with the Italian HITFIST-30P turret used on Rosomak. Another Fire Support version also appeared two years later, this time with a Belgian CT-CV turret by CMI Defence , armed with a 105mm gun. This variant was introduced to public during the EUROSATORY expo in Paris in 2012. Another little-known variant is a missile tank destroyer.

The final fate of the project is not well documented. Failing to attract any serious attention, it seemingly disappeared and there were several cancellation reports with the Polish military realizing that such light fire support vehicles would never replace a true Main Battle Tank and opting to purchase a number of modernized Leopard 2 Main Battle Tanks instead. The platform appeared back in 2016 under a different name (UMPG) in its IFV configuration. Despite the designation change, it’s clearly a further development of the Anders platform – unfortunately, without the General’s name this time. Whether it will attract more attention than its ill-fated predecessor remains to be seen, but given the fact that its IFV competition (BWP Borsuk) exists on paper only, the chances of it becoming Poland’s future tracked IFV (replacing the BMP series) are rather good.

In Armored Warfare, the WPB Anders will be a high-Tier Light Tank, armed with a 120mm gun. The model will be based on the 2010 Anders demonstrator design.

We hope you will enjoy playing it and will see you on the battlefield!