In the near future, we’re going to be launching the Spirithaven Raid event we unveiled recently, which will run for a month and during which you’ll have the opportunity to get your hands on various goodies, including four Japanese-themed Samurai skins.

But, at the same time, we are working on the next major update to the game, which will bring – amongst other things – a new Asian-themed Battle Path. Today, we’d like to tell you more about the first Premium vehicle that will be available as a part of it – the Japanese Type 74 Tier 5 Premium Main Battle Tank. 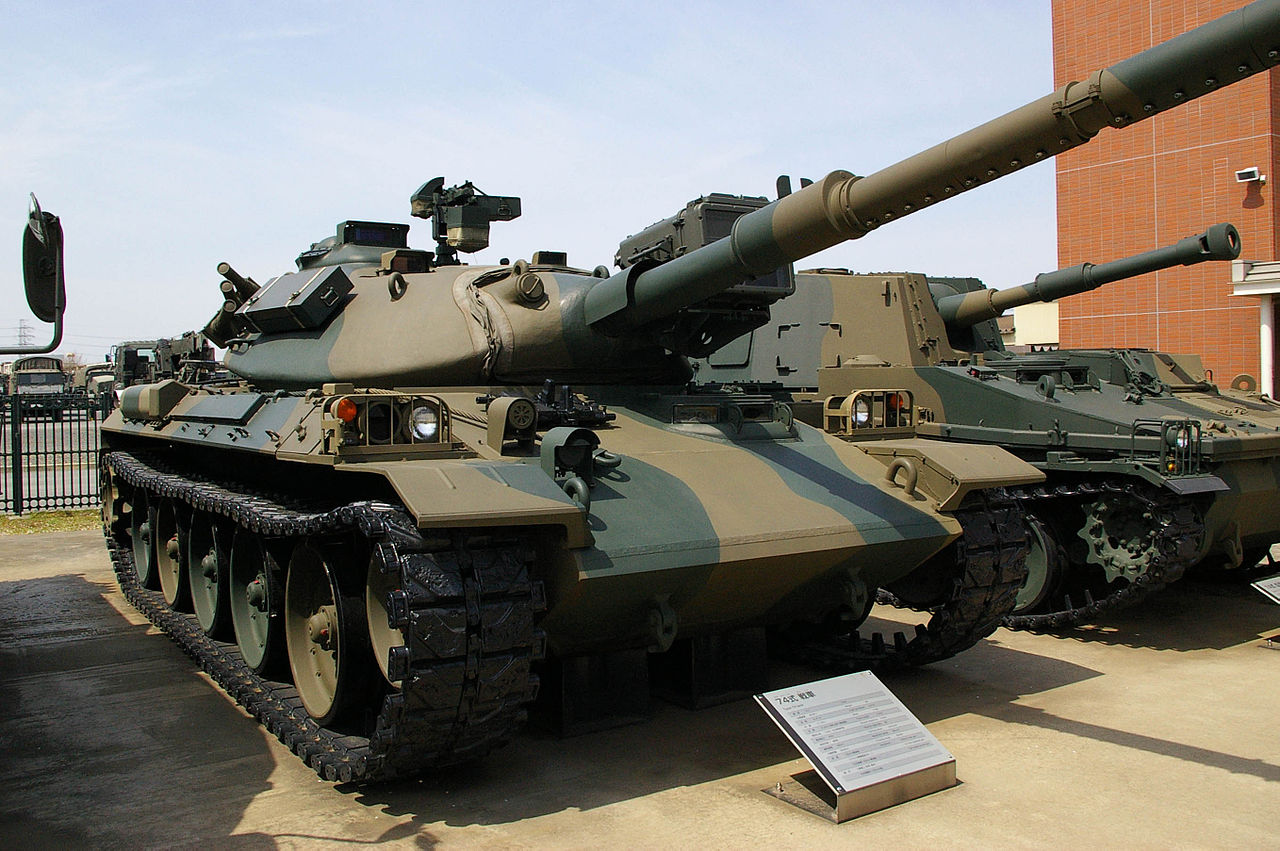 After the Second World War, Japan was left devastated and, for all intents and purposes, under American control with a sizeable garrison of U.S. troops stationed all around the country. It only gradually regained its political sovereignty starting from the early 1950s, a process that included the re-formation of the formal Japanese army with tanks and everything.

Japan started its post-war military armored corps history with several hundred Chaffee light tanks and around 250 Sherman tank of the Easy Eight variant (M4A3E8) – naturally, these came from American wartime surplus, which was a logical choice given the circumstances. However, these vehicles did have some notable issues.

As we’ve stated in several of our previous articles, Japan is a country with a lot of difficult terrain, especially in the mountain areas. This is a fact that dictates the Japanese defensive strategies (and, of course, armored vehicle design) to this day. This has proven to be a problem for the abovementioned initial batch of tanks. The Shermans in particular had difficulties traversing the rough terrain of the Hokkaido island where a Soviet invasion was (based on the American doctrine practiced by the Japanese as well as other intelligence) the most likely to take place. The Chaffee tanks didn’t suffer from this problem and were generally well-liked by the Japanese, but they had other issues.

Specifically, the Korean War experience has shown that the gun of the Chaffee had issues when dealing with the Soviet-designed T-34/85 medium tank. The Japanese therefore surmised that they would need something within the Light Tank weight category, but armed heavily enough to take on the Soviet medium (or even heavy) tanks. Another consideration was similar to the rationale behind the Leopard 1 and AMX-30 design – the 1950s were the era of rapidly emerging technologies, including anti-tank guided missiles. It was believed that such missiles would make any armor obsolete anyway, so why not shed it almost completely in favor of high mobility. And so the rather unique Japanese doctrine was born, combining light armor, solid firepower and, most importantly, the ability to traverse rough terrain. 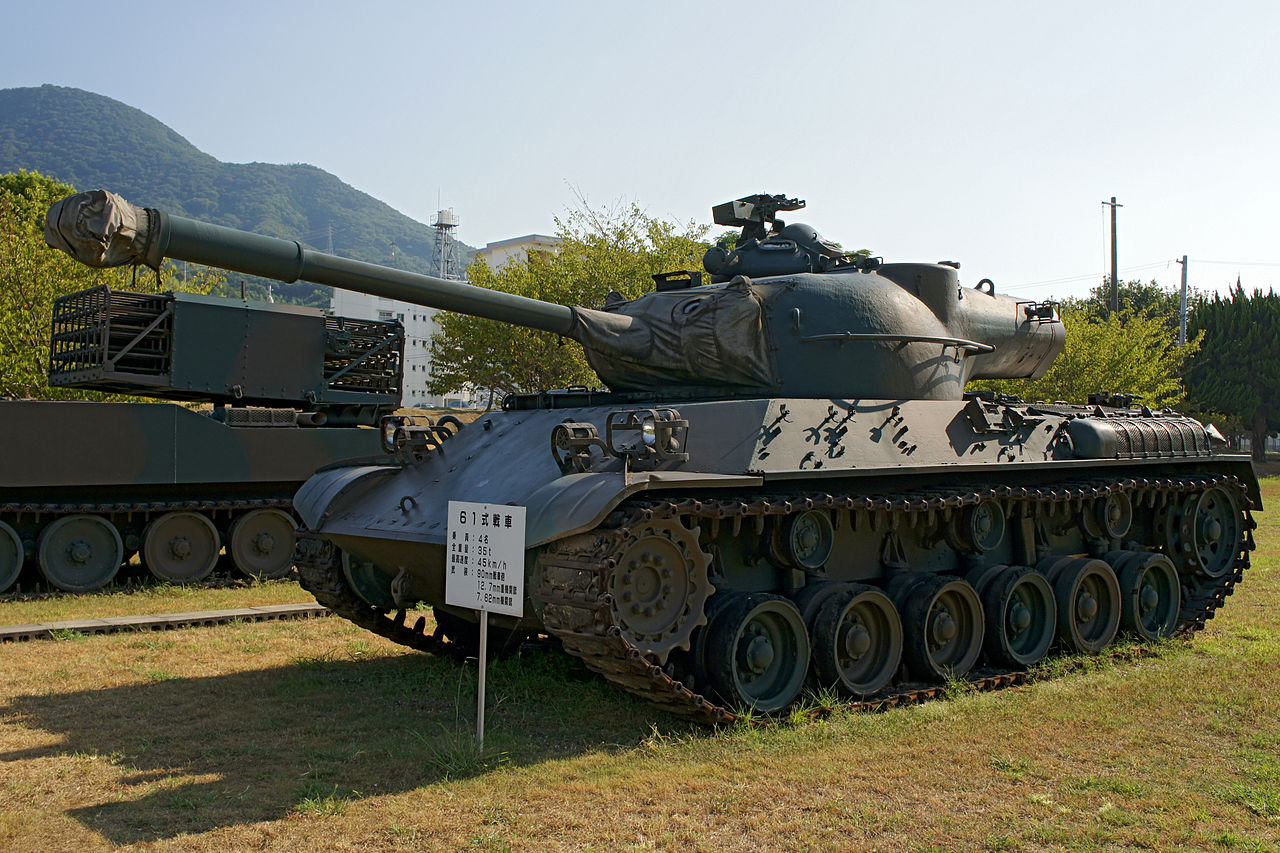 The first post-war Japanese tank built around the idea was the Type 61 MBT. Combining low weight with the 90mm gun that was thought capable of defeating the Soviet tanks of the 1950s, it was not a bad machine – for the 1950s, that is. However, it entered service in 1961 and remained in production until 1975. By that time, it was completely obsolete.

Or, rather, it was obsolete even as it entered service. After all, in the 1960s, the Soviets already had the T-55 and T-62 medium tanks while the British were deploying the Centurion. The Japanese were aware of the inadequacy of the Type 61 MBT and lively discussions were held regarding the future of the Japanese tank design. The first idea was to upgrade the Type 61 with a 105mm rifled gun, but, in 1965, it was scrapped in favor of developing an entirely new vehicle.

Through the 1960s (even before the 1965 decision), the development of specific components for the upcoming MBT took place:

The hydraulic suspension was a solution to the rough terrain issue, but was mechanically quite complex and took some time to develop. It was tested quite early on using a Type 60 APC, but it would take years before it was ready for the next MBT. The gun, on the other hand, was based on the Royal Ordnance L7 series and shared the barrel with it, but the breech, recoil management system and other elements of the gun were indigenous. It was therefore not a L7 copy, as many sources claim – in fact, it resembled the American M68 105mm rifled gun. By 1966, the gun was inserted into a newly developed narrow turret and firing tests were carried out. 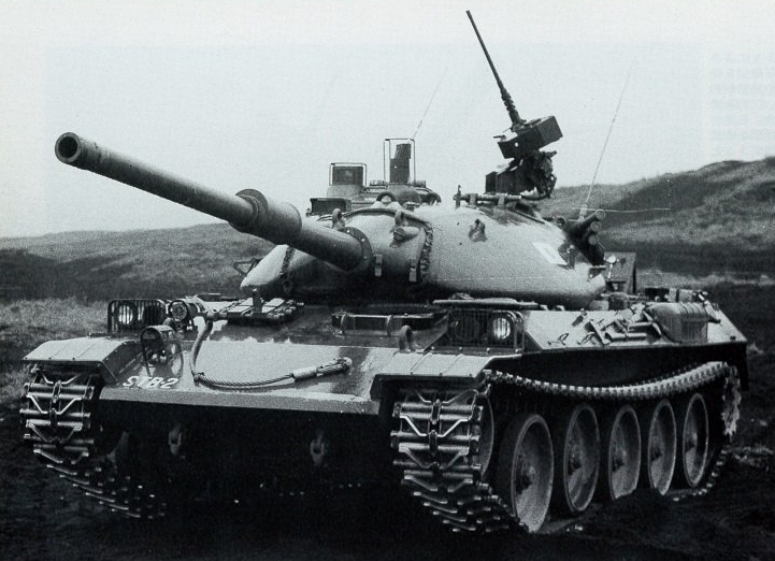 During the years that followed, the Japanese built first a 35 ton test bed (designated ST-T) that served them well during the suspension and engine trials. After that, two prototypes (STB-1 and STB-2) were designed and built and largely successfully tested. The early STB prototype characteristics were as follows. The tank weighed 38 tons, had a crew of four and was made entirely of steel due to the abovementioned philosophy of armor obsolescence. That does not mean the steel was thin, though. The armor was roughly as follows:

The tank was powered by the Mitsubishi 10ZF-21WT 750hp engine paired with the Mitsubishi MT-57T transmission, allowing for the maximum speed of 53 km/h. The suspension was hydraulic with variable clearance (400mm +/- 200mm), the tracks were 550mm wide and the ground pressure was 0.86 kg/cm2.

The STB prototypes were armed by the “Japanized” version of the Royal Ordnance L7 105mm rifled gun. The L/51 gun was manually loaded and would fire the following shells:

The vehicle carried 50 rounds of ammunition (28 in the front, 7 below the turret floor, 9 in the rear and 6 near a special loading assist device). The loading assist device was basically a mechanical assistant with four-round capacity, basically an improved ready rack that allowed the gunner and loader to fire one round each 4 seconds (after that, the rate of fire dropped).

The gun could elevate to +9 degrees and depress to -6 degrees, but these values were further enhanced by the suspension since the vehicle could both tilt to the front and back and to the sides. With this tilting, the gun elevation and depression reached +15 and -12 degrees.

Additionally, the gun was very accurate thanks to (at the time) cutting-edge technologies (such as a ballistics computer or laser rangefinder) being integrate into its FCS. 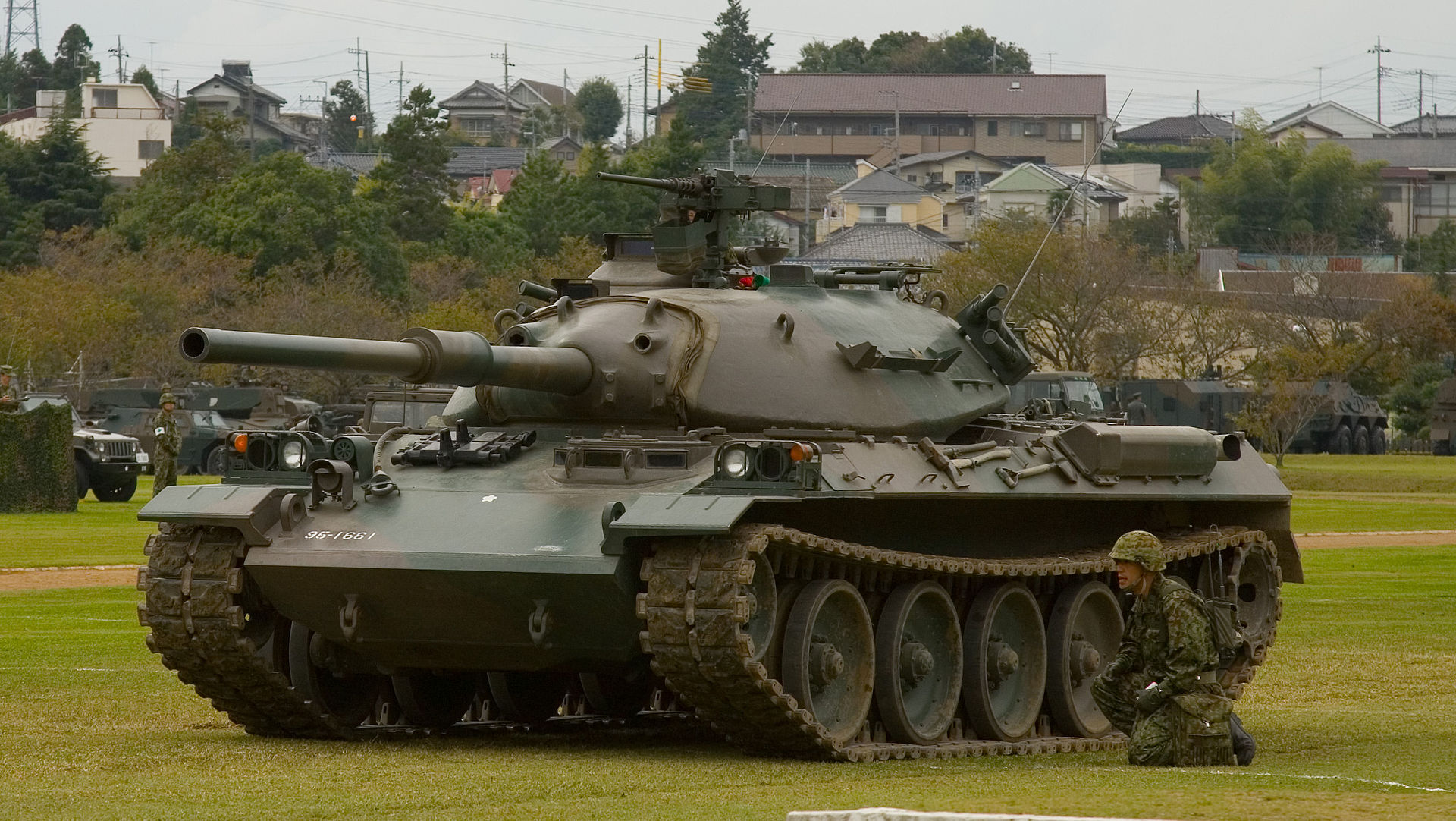 Overall, the Japanese were satisfied with the design and the next four STB prototype iterations (1970 to 1971) were more about making the tank affordable than further major improvements:

One of the STB prototypes was shown to public in 1972 and immediately caught public attention thanks to its rather beautiful, sleek lines. In November 1973, the STB design was reviewed (based on the final STB-6 prototype) and approved for mass-production under the designation Type 74.

Success was expected of this tank, so much that Sanadori Yamanaka, Japanese minister of defense at the time, tried to have it named after him (despite not being connected to it in any way) as the “Yamanaka tank”. This notion failed.

The tank was produced by Mitsubishi Heavy Industries between 1975 and 1988 with 893 vehicles built. With some smaller exceptions (like the engine detuning), the prototype data listed above applied to the production vehicle as well, especially regarding its armor.

The problem was that by the time it entered service, the tank was, once again, fairly obsolete. This may sound strange considering the fact that Japan is generally regarded as a technological superpower, but with so much effort focused on post-war rebuilding and what is generally known as the Japanese economic miracle, Japan wasn’t really in a position to invest extreme sums into tank development. 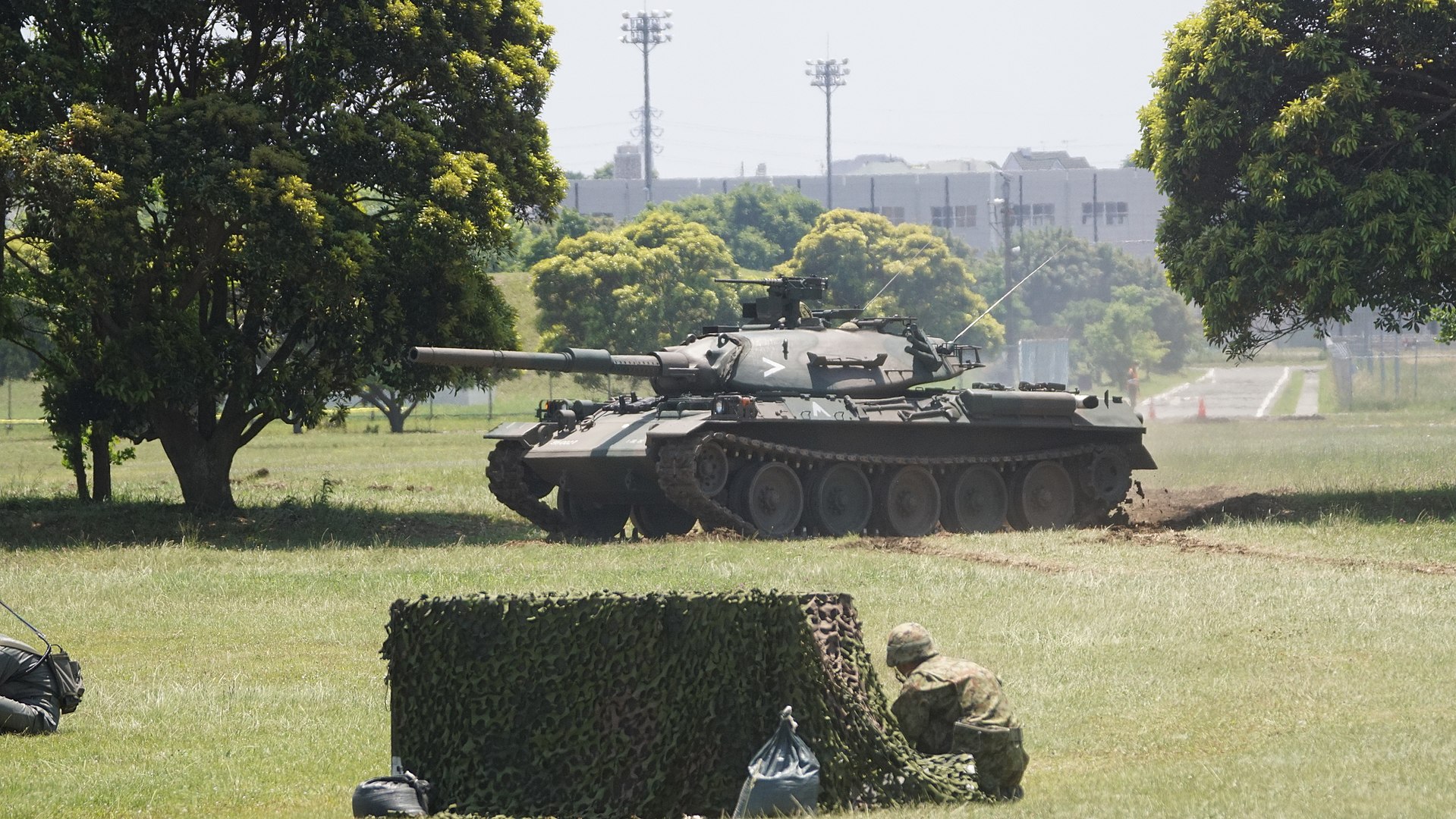 Another aspect was the fact that Japan did not export its military items at all and had little in terms of co-development with other western nations. Some technologies were purchased, but much of the research was completely indigenous and therefore took excessive amounts of time.

As a result, Japanese armored vehicles were produced in low numbers and were invariably incredibly expensive (in order to split the development costs into the production run). This in turn made them a popular target of public criticism and the budget cuts that would follow in a vicious circle.

The Japanese were, of course, aware of the fact that, once again, they were in a possession of an obsolete MBT that was inferior to the Soviet T-72 series, which is why a development program for its replacement (called TK-X) was launched as early as in 1977. That program resulted in the Type 90 MBT, which was only available starting from 1990. The Soviet Union fell apart one year later and you already know the rest of the story.

It’s worth noting that several “patterns” of this tank were produced over the years:

There were two more patterns developed:

Of the Type 74 Mod G only four vehicles built as prototypes before it was decided this program was not economically feasible. 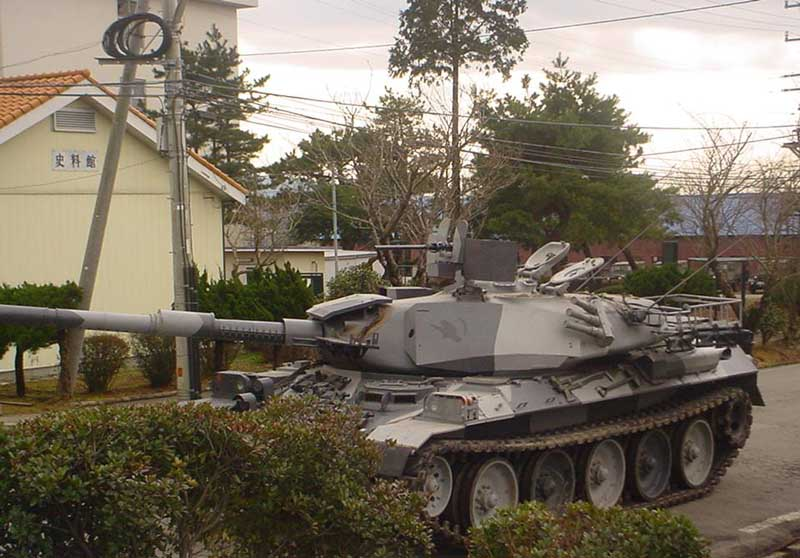 The Type 74 MBT soldiered on, was produced until the end of the Cold War and still remains in Japanese service, at least partially –it’s being decommissioned piece by piece and replaced by other vehicles, such as the Type 10 MBT or the Type 16 MCV. It has never fired a shot in anger and only ever fought such enemies as the world-famous Godzilla – in the movies, that is.

Like was stated above, in Armored Warfare, the Type 74 will be a Tier 5 Premium Main Battle Tank and the first on five new Battle Path reward vehicles. 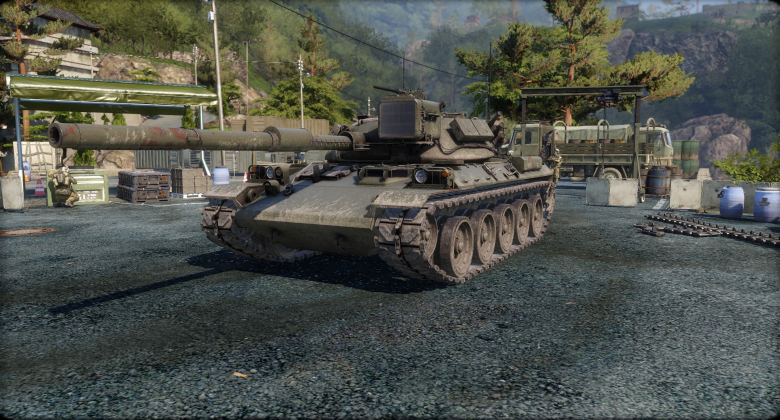 Gameplay-wise, it will be a rather standard MBT with good firepower (roughly comparable to the fully researched M60A3), enhanced further by the presence of fully adjustable active suspension, which tilts both to the front and back, but also to the sides as the lowest Tier vehicle with this feature. 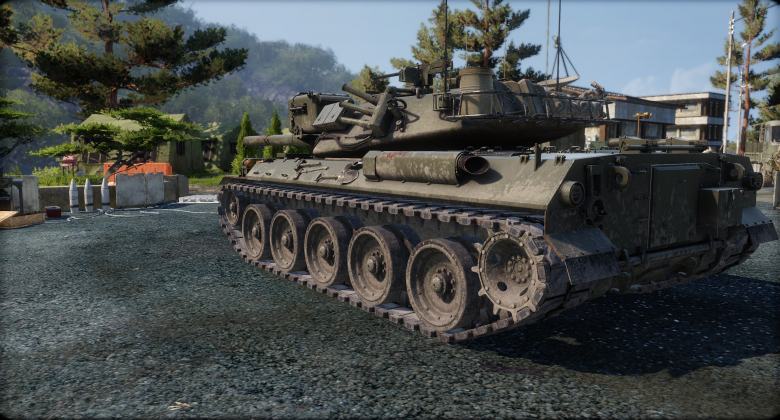 With that being said, let’s start with protection – both the turret and the hull are made of steel only and will be somewhat thicker than those of the Leopard 1 MBT, which means rather thin. At best, the front of the vehicle will be able to withstand Tier 5 kinetic rounds, but most of the plates will be thinner than that and therefore more vulnerable. But this MBT won’t be that much about armor anyway, it will be about firepower and mobility.

Speaking of mobility – its 38 tons will be moved around by its 750hp Mitsubishi engine, giving it the maximum speed of 60 km/h and the 0 to 32 km/h acceleration time of 5.5 seconds. Its hull traverse rate will be roughly 35 degrees per second. 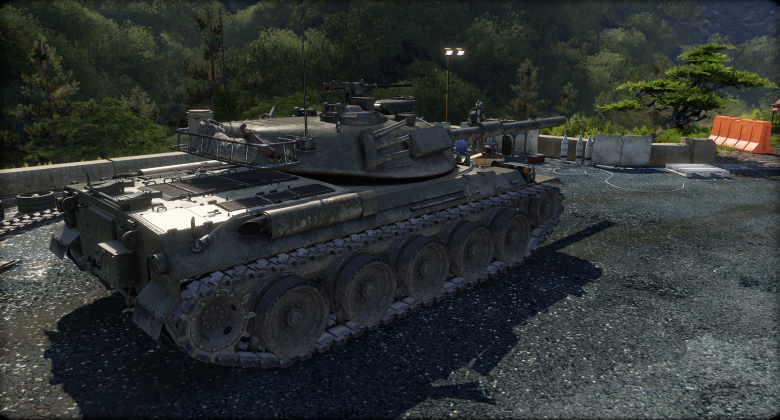 The firepower will be provided by a rather standard Japanese copy of the British Royal Ordnance L7 105mm rifled gun that fires APFSDS shells (400mm penetration), HESH shells (250mm penetration) and, of course, HE. The gun will be roughly on par with other vehicles of its Tier (roughly 6.3s reload time, 0.11 accuracy) but will feature excellent depression and elevation (-8/+9 degrees without the adjustable suspension, -14/+15 degrees with it) as well as great damage per minute value (amongst the best of its Tier and class).

Apart from tilting, there will of course be the option to make the vehicle crouch in order to increase its camouflage (19 to 23 percent) at the cost of view range (410m to 405m) and agility. 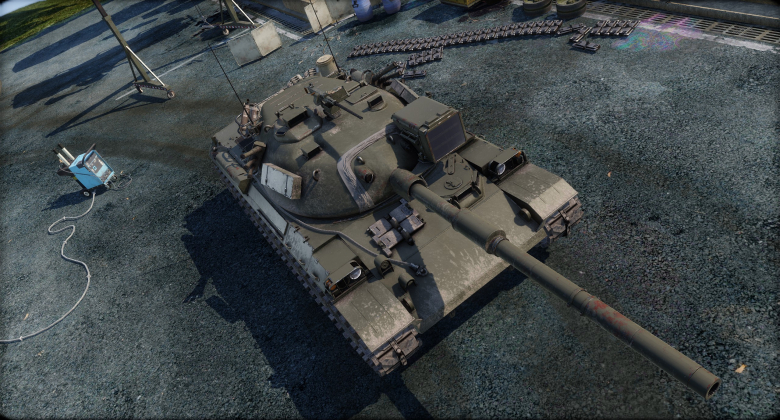 We hope that you will enjoy this upcoming Main Battle Tank and, as always: